A new FDA-approved birth control pill will give women just four periods per year. But is it safe to stanch the flow? 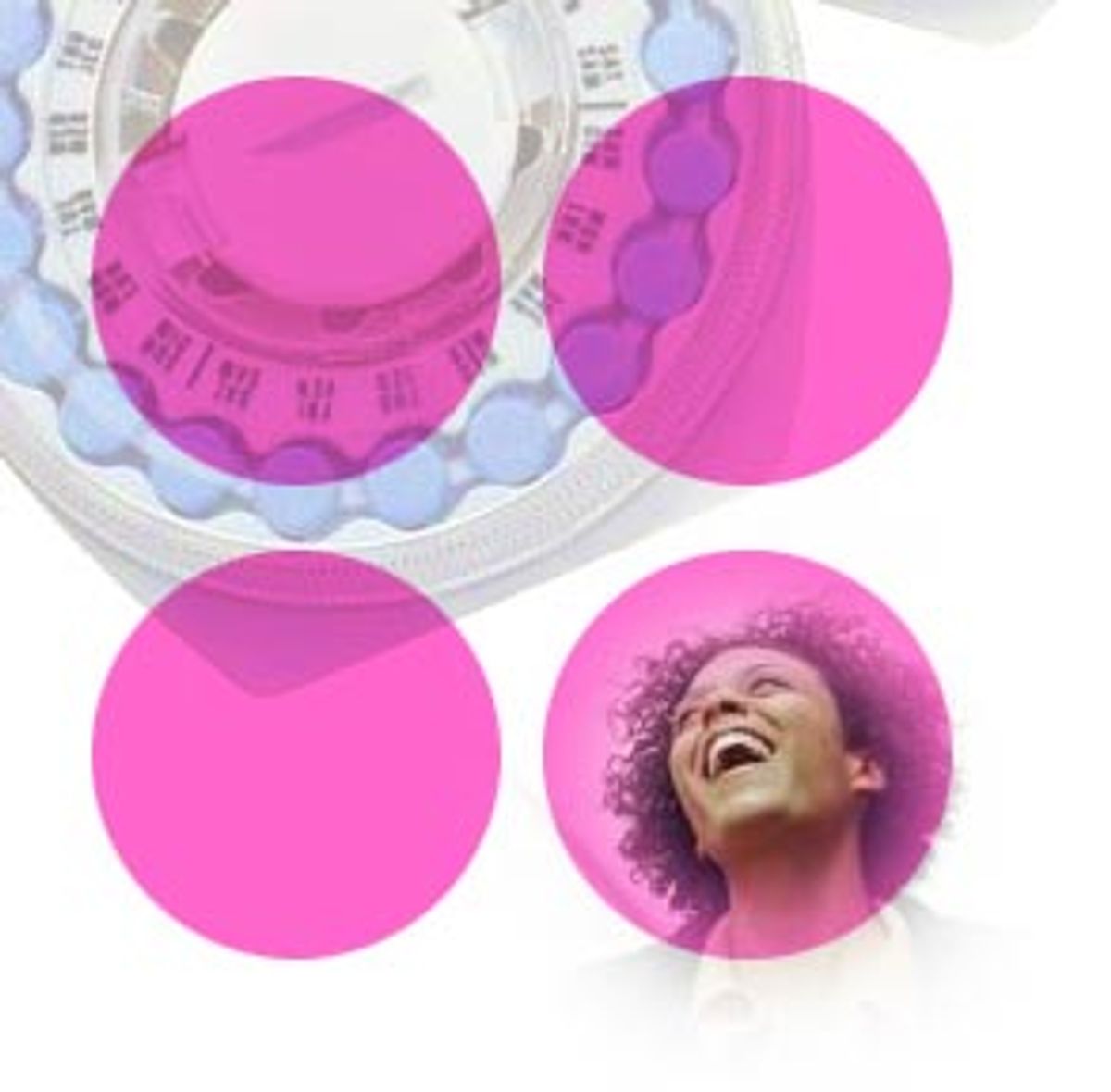 Menstruation never suited Angela Fontaine. Between swimming, fishing, skiing, raising a 9-year-old daughter, and working 12-hour shifts as a labor and delivery nurse, there wasn't enough time to waste a few days each month feeling bloated and cranky. So when the 29-year-old from Jacksonville, Fla., learned she could do away with her periods -- or at least most of them -- she jumped at the chance.

The opportunity came in the form of a clinical trial for a new type of birth control pill called Seasonale. Released this month by Barr Laboratories, Seasonale -- which gives women just four periods per year -- is the first FDA-approved birth control pill designed to overhaul the time-honored monthly cycle. While the FDA and much of the medical community have already signed off on other period-suppressing contraceptive methods -- such as the injection known as Depo-Provera and the slow-release hormonal implant called Norplant, both of which cause irregular menstruation in some users, or stop it entirely -- the advent of Seasonale promises a newly predictable way of cutting down on periods.

Like traditional birth control pills, Seasonale contains synthetic estrogen and progesterone. And like the traditional pills, the new drug runs about a dollar per pill. The difference is that with Seasonale, women will take 84 days of the hormones -- as opposed to 21 -- before starting their seven-day course of placebos, and they will get their periods just once every three months.

"I felt much better on it, and I didn't have any side effects," says Fontaine. Now through with the yearlong trial, which included 682 women, and temporarily off the pill to try to conceive, she says that once her next child is born, she'll never go back to monthly menstruation.

Fontaine is far from alone. According to a study by the market research firm RoperASW, two-thirds of women say they would happily forgo menstruation if the method were safe. And their dreams may soon be realized, as many experts expect the next step will be a pill designed to do away with the period altogether. Indeed, some women are too eager to wait for a new drug. In recent years, more and more women have been opting out of their periods -- some on the advice of doctors who recommend menstrual suppression to relieve painful periods, and others who simply prefer to avoid the monthly hassle -- by taking regular birth control pills nonstop and skipping the seven days of placebos that come in each pack.

Now, as Barr Laboratories gets ready to unleash a 250-person sales force to market its new drug to healthcare providers around the country, menstrual suppression is going mainstream. And as it does, questions are mounting: Is it safe, or are women endangering their health for the sake of convenience? Is the monthly cycle a woman's natural rhythm, best left alone, or is it an arbitrary medical construct? Are periods a central component of female identity, or are they merely an impediment -- as treatable as bad eyesight?

According to Dr. Leslie Miller, an assistant professor of obstetrics and gynecology at the University of Washington who advocates menstrual suppression by the taking of continuous low-dose birth control pills, the uterus was simply not designed to bleed every month. Historically, says Miller, who has suppressed her own period for years, women started menstruating later in their lives, and then spent many years pregnant and breast-feeding. "One hundred years ago, the average woman had fewer than 50 periods during her life," Miller writes on her menstrual suppression Web site. "Now, the modern woman could have 450 lifetime periods."

Miller also points out that the periods women have on the traditional birth control pill hardly constitute true menstruation. "It's a fake period," she says, noting that the bleeding that happens on the pill has nothing to do with ovulation. Women on the pill only bleed each month because the placebos cause their hormones to change and their uterine lining to weaken.

In fact, when the pill was first developed in the 1950s, its inventors acknowledged that women taking the drug did not need to have periods every month. "In view of the ability of this compound to prevent menstrual bleeding as long as it is taken," wrote one of the pill's original developers in 1958, "a cycle of any desired length could be produced." The pill's makers settled on a monthly cycle -- 21 days of hormones, followed by seven days of placebos -- to mimic a woman's natural cycle. It was a decision guided more by public relations than medical science. If the pill produced a monthly cycle, they figured, women would be more comfortable taking the drug.

Still, not everyone is convinced that the era of the period is coming to an end. Susan Rako, a Boston psychiatrist and the author of "No More Periods? The Risks of Menstrual Suppression and Other Cutting-Edge Issues About Hormones and Women's Health," calls menstrual suppression "the largest uncontrolled experiment in medical history." Rako says that women who eliminate their periods can develop symptoms of testosterone deficiency, such as diminished sexual desire, loss of muscle tone, reduced energy, and weight gain.

And then there are worries about more pernicious health problems. Even as many experts tout the safety of menstrual suppression, others -- particularly those suspicious of oral contraceptives to begin with -- voice concerns about the health risks of a placebo-less pill hormone regimen. Since long-term use of estrogen products has been linked to an increased risk of breast cancer, some doctors fear that a daily dosage of the hormone could be particularly harmful. And Rako says that nonstop pill usage could increase the odds of contracting cervical cancer among women who have the human papilloma virus (HPV), a not uncommon sexually transmitted disease. Pointing to studies connecting the traditional birth control pill with higher incidences of cervical cancer among HPV-infected women, Rako worries that Seasonale and other menstrual suppression regimens will increase women's risk of cervical cancer even more.

"The normal menstrual period is a somewhat complicated process," adds Dr. Edward Kleiber, an endocrinologist with the University of Massachusetts Medical Center who is leery of the traditional birth control pill -- and even more suspicious of a pill that eliminates periods altogether. "We've been manipulating it as though we could do it without any serious implications." Pointing to the recently publicized health hazards associated with certain hormone replacement regimens, and to the heightened risk of heart disease that has been linked to Depo-Provera, Kleiber says that tampering with a woman's natural hormonal balance is no small risk.

Difficult as these medical debates may be to resolve, the sociological questions may be even more divisive. For better or worse, the monthly period has become deeply interwoven with many women's identity, a badge of honor connoting health and fertility and communion with nature -- or a curse, depending on whom you ask.

Jordan Rosenfeld, a 29-year-old freelance writer in San Francisco, says she would never voluntarily eliminate her own period. "It's an event that I've known pretty consistently for more than half my life," she says, with a hint of wistfulness in her voice. "There's a certain amount of my feminine identity that's attached to having my period." And although Rosenfeld suffers from moderate cramps, she describes a certain satisfaction in feeling the workings of her uterus on a monthly basis. "Maybe there's a certain kind of pride you get in suffering," she says.

In Rako's view, toying with a woman's emotions and libido -- both of which she says rise and fall throughout the monthly hormonal cycle -- amounts to meddling with her very femaleness. "It is appalling to me to think that some parents with teens might petition their doctor to give their daughters nonstop birth control pills," says Rako. "Girls in their teens need to get to know themselves and their bodies and their rhythms and their sexuality."

Even advocates of menstrual suppression acknowledge that the thought of forgoing monthly periods is hard for a lot of women to swallow. According to Dr. Anita Nelson, a professor at the UCLA medical school and a member of the advisory board of Barr Laboratories, many female patients first regard period stopping with some degree of suspicion. But Nelson says that once women separate the facts about monthly menstruation from the myths, they often experience a "wave of anger" that comes from the realization that they've been enduring monthly cramps for no reason.

Dian Campbell, a 48-year-old craftsperson in Seattle who has been practicing menstrual suppression for two years, counts herself among those who endured needless pain for too long. After struggling with severe cramps and flu-like symptoms every month, Campbell's doctor recommended she take birth control pills with no placebos. "I am so happy to not be spending a couple of days a month in [misery], psychologically, mentally, emotionally -- to say nothing of the physical," Campbell says. "I was certainly not cherishing anything about any of that womanly stuff."

Likewise, Sandra Wooten, a 41-year-old unemployed banker, says she wasted too many years enduring monthly abdominal pain. After taking high doses of over-the-counter drugs, then prescription narcotics, and eventually having two surgical procedures on her uterus, Wooten finally found salvation when her gynecologist suggested menstrual suppression. Two years later, pain free and period free, Wooten wonders how -- and why -- she withstood those years of pain.

Then there's the feminist case to be made for menstrual suppression, and it's one that the backers of Seasonale are promoting. Some studies show that menstruation-related suffering is a leading cause of missing school days and workdays for girls and women. And that even when menstruating women are present, they are less productive during their periods.

"When you're talking about a glass ceiling, I wonder if women walk past the Kotex to get there," says Nelson. Recalling the case of a 12-year-old patient whose severe menstrual cramps caused her to miss several days of school each month and fall behind in her classes, Nelson says there's a fine line between exploring your femininity and needless torture.

"They need to learn pain and suffering? They need to know that women have a different role in life?" Nelson asks indignantly. "What if guys had clumps of blood coming out of the ends of their penises? We would have come out with this a decade ago."

Maybe so. But for women like Angela Fontaine, the advent of Seasonale is better late than never. And as menstrual-suppression regimens make their way into pharmacies around the country, each woman will have to decide for herself: to bleed or not to bleed.

Jennifer Fried is an assistant editor at The American Lawyer.