With Billy Bob Thornton as an irredeemable scumbag Kris Kringle, this willfully tasteless comedy might just save Christmas. 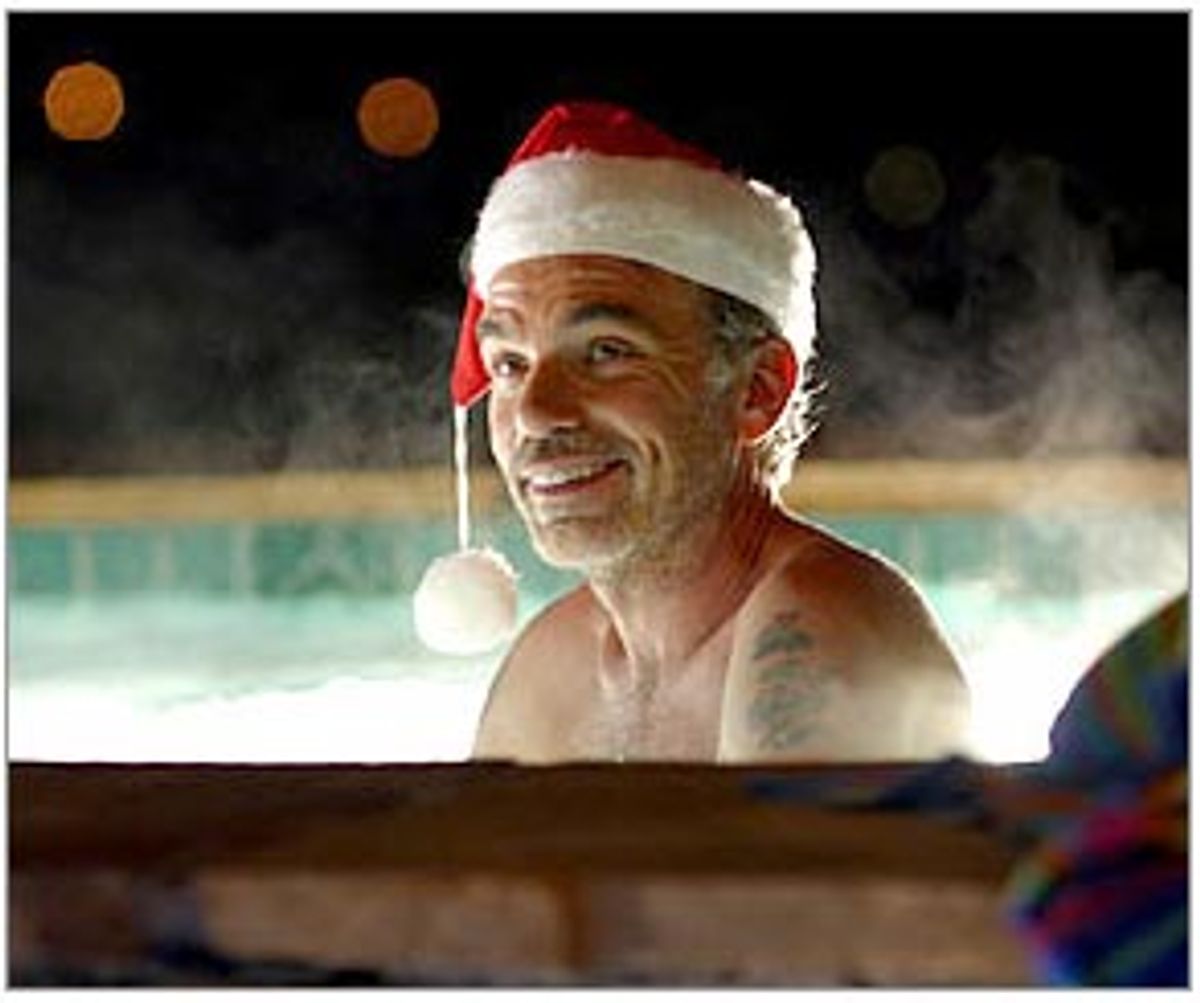 And yet director Terry Zwigoff ("Crumb," "Ghost World") manages to turn vulgarity into its own kind of style. By the end of "Bad Santa," you'll have heard the F-word so many times that it barely registers: Like the rhythm section in a wedding band, it's just there. You'll also have learned what the three B's are. (The most printable one is "booze.") In fact, you'll learn a lot from "Bad Santa," and if you know what's good for you, you won't repeat any of it to your mother. On the other hand, if you're a sailor headed for shore leave, you might want to take notes.

Billy Bob Thornton is a bony, unshaven department store Santa who, with his very short partner, Tony Cox, specializes in robbing retail establishments at Christmastime. (After store hours, Thornton cracks the safe while Cox "shops" from an illustrated list given to him by his girlfriend, tossing Manolo Blahnik pumps and Judith Lieber purses into a giant shopping cart as if they were bags of potato chips.) By day, though, Thornton, in between swigs of Old Granddad and vigorous butt scratching, has to suffer through hours' worth of holding innocent munchkins on his lap as they prattle on about what they want for Christmas. He rushes them through, assembly-line style, interrupting their earnest requests with snarling asides like "Make it quick, Santa's gotta pee."

An overweight and slightly warped kid, played by Brett Kelly, changes everything for Thornton, but the redemption in "Bad Santa" isn't the sloppy, sappy kind. Thornton's character isn't the kind of guy who changes overnight; he's the kind of guy you can't believe would change at all. He spends half the movie running around in various bits of Santa garb: Much of the time he wears a limp white T-shirt, his skeletal tattooed arms dangling out of its rippling sleeves, his Santa pants hanging low and loose on his almost nonexistent butt. The beard he wears on duty is gray and ratty and cheap, and when one kid yanks it off and expresses surprise that it's not real, Thornton reveals that his real beard fell out as the result of his being sick. What was wrong with him? the kid wants to know. "I loved a woman who wasn't clean," says Thornton, with deadpan, lackadaisical solemnity.

Thornton, who drinks, swears and screws his way through the picture, is wonderful: There's a mischievousness to his performance that's never coy or cute. He revels in the movie's Rabelaisian spirit without ever looking over his shoulder to make sure we're getting it. (The script is by Glenn Ficarra and John Requa, who recently collaborated on Joe Dante's "Looney Tunes: Back in Action.") Zwigoff may have more actors here than he quite knows what to do with: The always hilarious Bernie Mac plays a store detective, but his role peters out to nothing, and Cloris Leachman, as an out-of-it grandma, has only one line, which she repeats twice: "Let me go make some sandwiches." It's a shame she doesn't have more to do.

But "Bad Santa" does feature one last turn from the late John Ritter as a twittery department-store manager (his name, Mr. Chipeska, is a stroke of brilliance that I still can't quite put my finger on). His anxiety over protecting "the children" from the filthy lout he's hired to play Kris Kringle gives the movie a nice shot of loopy, nervous energy.

As far as protecting the children goes, parents are strongly cautioned: If your children are over 40, it's probably safe to take them to see "Bad Santa," but I leave that to your discretion. I will say, though, that I found the escalating disreputability of "Bad Santa" completely cathartic. After 90-odd minutes of salacious gross-out jokes and unapologetically bad behavior, I left the theater feeling cleaner, more virtuous, and more filled with love for my fellow human beings than I did after that overcooked heartwarmer "Love Actually" (with its wearying catchphrase, borrowed from the Troggs, "Love is all around"). Bad taste is better than no taste, as style empress Diana Vreeland said, and "Bad Santa" spreads it freely and honestly, like fertilizer. You see, love actually is all around, as long as you know where to look.