A reason to give thanks

Jim Sheridan's miraculous "In America," a generous but never sentimental fable of Irish immigrants in '80s New York, may be the great movie of 2003. 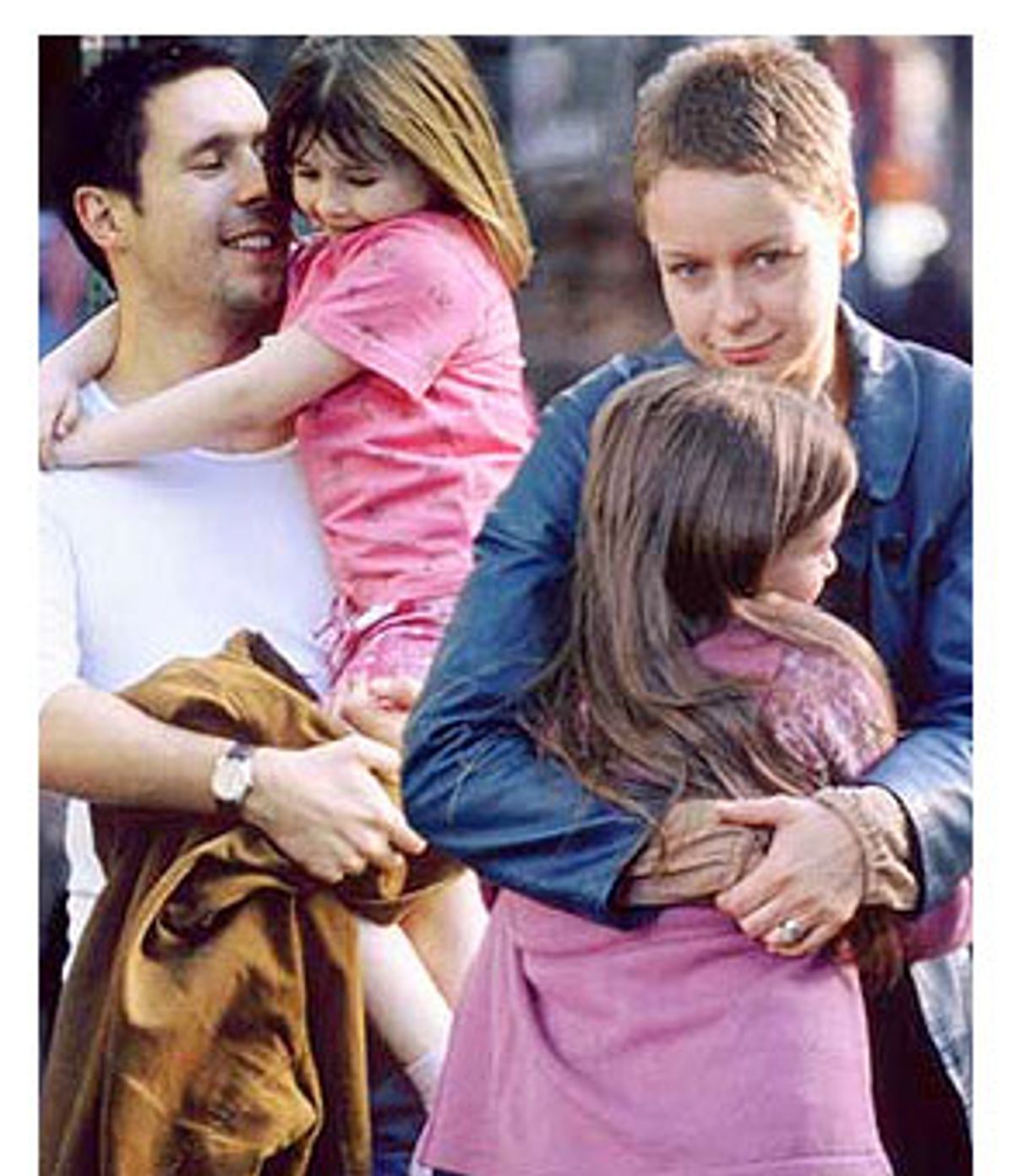 The three miracles that occur over the course of Jim Sheridan's "In America" pale next to the miracle of the movie itself. The story, about an Irish couple recovering from the loss of a child who move with their two small daughters from Dublin to a New York tenement, is the kind that invites all sorts of sentimentality about family and starting over and even redemption. "In America" is about all those things. But Sheridan is one of those artists unafraid of emotion. They are often the least susceptible to sentimentality, perhaps because they convey what they feel so strongly and so directly that, even at its largest and most unwieldy, the emotion feels pure. In the face of the fierce emotion that bowls through Sheridan's movies, sentimentality doesn't stand a chance.

Sheridan's best previous movies, "My Left Foot" and "In the Name of the Father," explored subjects that could have tempted a less talented filmmaker into schmaltz and self-righteousness. Each work had scenes -- Christy Brown's anguished public declaration of love for his doctor (Fiona Shaw) in "My Left Foot"; Emma Thompson's outburst in the courtroom finale of "In the Name of the Father" and Daniel Day-Lewis' stride out the courtroom doors to freedom -- as overwhelming as anything else in the movies.

Some moments in "In America" affected me so strongly I didn't see how anything that followed could match them. But when Jim Sheridan is working at the top of his game, as he is here, it's like seeing Baryshnikov at his peak and not being able to believe his next leap would be higher than the one that already had your jaw dropping open. Sheridan doesn't exhaust your capacity to feel; he widens and deepens it until you're in communion with the people on the screen.

Sheridan wrote "In America" with his two daughters, Naomi and Kirsten. It's their own story they're telling. In the early '80s, after the death of Sheridan's brother Frankie (to whose memory the movie is dedicated), he, his wife and their two daughters moved to New York, flat broke, and settled in a Hell's Kitchen tenement while he tried to find work in theater. In the movie, Frankie is the name of the child that Johnny (Paddy Considine) and Sarah (Samantha Morton) have lost.

The top-floor walk-up they find for themselves and their daughters, 10-year-old Christy and 7-year-old Ariel (played by real-life sisters Sarah and Emma Bolger), has, thanks to a smashed skylight, become a roost for pigeons (little Ariel asks her da if they can keep them). The rest of the building, thanks to the decay of New York in the '80s, has become a roost for junkies. They're always hanging around the lobby or the stoop. But even they seem afraid of Mateo (Djimon Hounsou), the artist who lives behind a door painted with the words "Keep Away" and whose presence is felt through the gut-wrenching howls of fury that emerge from within his apartment.

Johnny and Sarah and their girls don't need Mateo's outbursts to feel as if a spirit is haunting them. The dead Frankie is the family's phantom limb. For 10-year-old Christy he's a protective spirit, and she believes he's left her three wishes to be granted when she's most in need. Frankie is so alive for Johnny that when the family is crossing the Canadian border into the United States, he tells the customs officer they have three children. You feel the dead boy's presence in all the interactions between Johnny and Sarah. They're still obviously in love with each other, and they share a crazy faith in the family's ability to survive.

They turn their large, open apartment into something like a bohemian fantasist's idea of a big-city dwelling, using paint to spruce up the decrepit interior and adding trompe-l'oeil touches like painted vines climbing the walls. The place is their sanctuary, their playground, their fantasy fort. The tension in the marriage is in the way they tiptoe around the devastation of Frankie's death.

Johnny has switched on his internal autopilot of emotional self-preservation. It's not that he's abandoned his duties to his family. In one scene he drags a battered air conditioner across the city to give his family some relief from the New York summer, and you can measure his commitment to his three girls with every punishing step he takes lugging the thing up the precarious staircases of his tenement. Sheridan has given Paddy Considine the hard task of playing a decent, loving man who nonetheless holds himself in reserve, and Considine stays true to that conception without making Johnny cold. Part of his remove is just the armor he needs to get through the day, but we're always aware of the part beneath the surface, the loss that he tries to hold at bay for fear that it may undo him.

As Sarah, Samantha Morton turns in the latest of what has become a career of astonishments. After "Under the Skin," "Dreaming of Joseph Lees," "Sweet and Lowdown" and "Morvern Callar," I don't think it's too much to say that she's one of the greatest actors ever to work in the movies. Some actors are so alert and alive in front of the camera that you swear you can see them thinking. With Morton you feel as though you can see the blood coursing through her veins, even when she's doing something as simple as lying in bed.

Even Sarah's short haircut serves a purpose, as if the spiky strands were antennae signaling her thoughts and feelings. Morton has not made the mistake that some actresses do, desexualizing herself because she's playing a mother. In one scene she sends the girls out for ice cream to the restaurant where she's picked up a waitressing job, so she and Johnny can make love. There's as much desperation as eroticism in their lovemaking, and while there's an element of craziness in Sarah's allowing herself to become pregnant (the doctor has told her that either she or her child might not survive another pregnancy), Morton makes it seem like a grab at life. She's not trying to replace Frankie as much as to negate the pain of losing him. She seems to believe that carrying a life inside her will somehow defy the fates. Morton erases the difference between Sarah's common sense and her faith in chance; she makes them the same thing.

"In America" moves with the sweetness and clarity of a child's song, literally in the scene where 10-year-old Christy, in a cowgirl outfit, gets up at a school parents' night to sing "Desperado." The Sheridans may have been inspired by the rendition of the song on the CD "The Langley Schools Music Project: Innocence & Despair," a collection of pop songs from the '60s and early '70s sung by schoolkids from a rural Canadian town.

Sarah Bolger's rendition recalls what Hans Fenger, the teacher responsible for putting that music together, wrote of 9-year-old Sheila Behman's version of "Desperado" on that record: "She sang it without a trace of sentimentality, a literal reading. She had no idea about the romantic cowboy stuff; she just heard it as sad, the way a child does." That's exactly how Christy and Ariel react to the life around them, directly, perhaps not understanding all the nuances of what's going on between their parents but with an instinctive grasp of the emotional climate.

We see the movie through the eyes of the two little girls. Christy, who manages her emotions by viewing the family through her camcorder, is the narrator. Ariel is a happier presence because her age protects her from some of Christy's knowledge. They are the audience's pipeline into the movie's emotions, and both of the Bolger sisters are lyrical perfection. Though they both give distinct performances -- Ariel's sunny openness to whomever she comes in contact with, versus Christy's warier and more fretful nature -- the pair take on the inseparable fluidity of a chorus.

The Bolger sisters make their way past your defenses, not with the practiced mugging of professional children but with the sureness of actors. Christy and Ariel also make their way past Mateo's literal and figurative defenses. Ariel knocks on his door during their first desultory experience with trick-or-treating. He invites the girls in, and soon Mateo has become a part of the family's life. Djimon Hounsou has been a beautiful camera subject in "Amistad" and "Gladiator," but he's never gotten the chance to prove himself as an actor the way he does here.

Mateo could easily be a disastrous conception -- a dying artist raging with his love for life and the knowledge that he has only so much time left. Hounsou simultaneously humanizes the conception and delivers a performance that scales operatic heights. You find yourself almost physically drawn to him, inclining in your seat to hear what he says or to watch the casual, regal way he carries himself. Moments that would defeat some actors (such as Mateo's outburst to Johnny about the love he feels for this Irish family) or that might feel impossibly coy (a quiet scene where he tells Ariel that, like her beloved E.T., he's an alien who is preparing to go home) come off instead as marvels.

But then, "In America" is a movie of marvels, one whose emotional pitch is never less than mysteriously right. The cinematography by Declan Quinn is very much an immigrant's view of New York, colored by romance and yet discerning. Even the grubbiest, most down-at-heels corners of the city feel alive, full of promise, the avenues and decayed buildings and neon possessing something of the quality of an enchanted forest, the kind where the very trees come alive to talk to you. That combination of enchantment and grit is the key to the movie, in which no victory comes without cost and where each emotional epiphany is surrounded by a nimbus of loss.

If a movie can be both robust and exquisite, "In America" is. In its final moments, Sheridan achieves something that only a few other directors have, easing you gently back into the world outside the theater. The movie itself is gift enough. For Sheridan and his collaborators to finish by telling you that the life waiting for you back in the world is another gift feels almost unbelievably generous. "In America" is the work of a great filmmaker who makes you feel as if you're in the presence of an Irish King Kong. Sheridan scoops you up in a rough-and-tumble embrace and then sets you down, safe and sound, back in your world. Not many great adventures have such a loving finish.