"The Triplets of Belleville"

Animator Sylvain Chomet provides one of the season's most eccentric delights with this charmingly old-fashioned tale of an old lady, a bicycle race and a big fat dog. 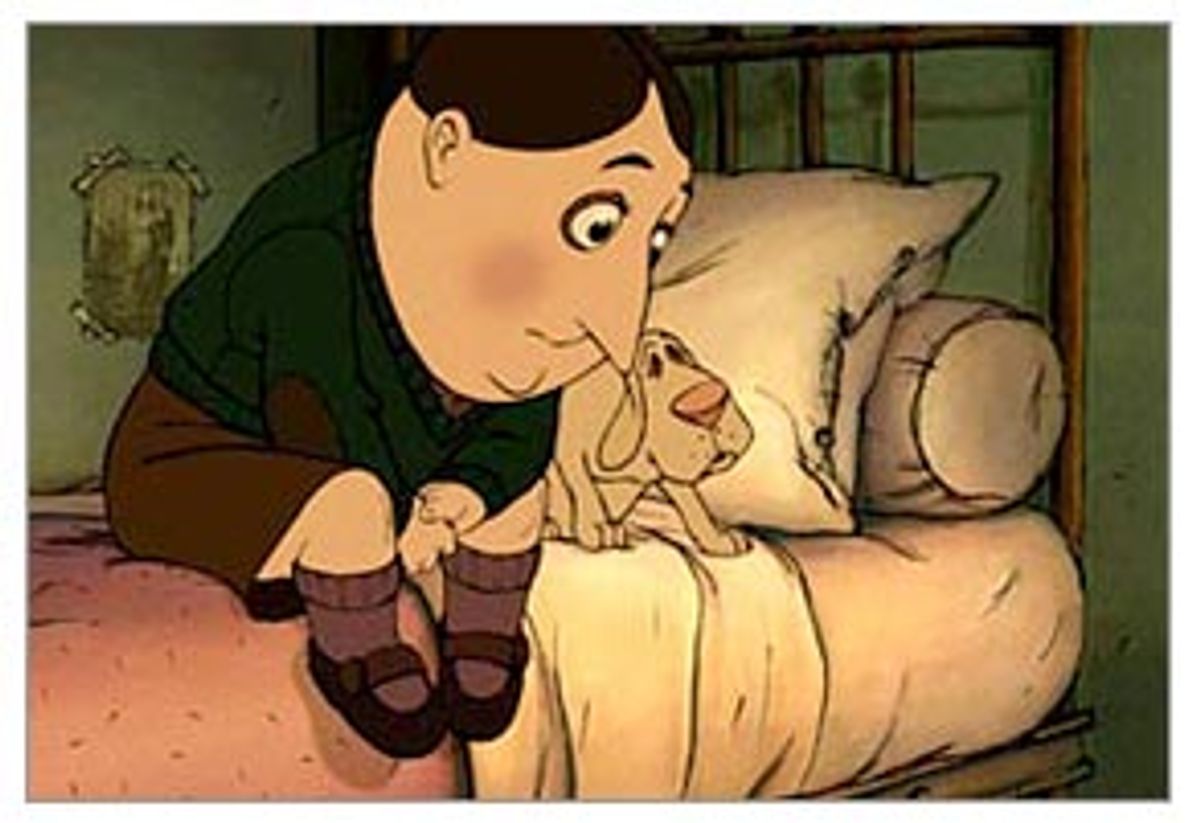 The first 10 minutes of Sylvain Chomet's animated feature "The Triplets of Belleville" constitute one of the eeriest, most inventive and loveliest animated sequences I've ever seen: Rendered in the style of old black-and-white Max Fleischer cartoons, a group of decked-out swells stream into a swanky nightclub. The women are diamond-draped giantesses further enlarged by the puffy furs they're swathed in; their swains are grasshopper-skinny, clad in twig-size tuxedos.

The performance inside the club begins: We see an insouciant Django Reinhardt plucking away at a guitar (he uses his toes as well as his hands, simply because as a cartoon, he can), a moony-eyed Charles Trenet cuddling up to a cushiony ballad, and a kinetic Josephine Baker, topless, wiggling and jiggling in a flirtatious banana dance. But the stars of this magnificent performance are the three stringbean-thin, rouged molls who cluster around a microphone to perform a strange and marvelous song based on improvised street rhythms. Their fingers snap, their heads bob. Their voices have a crackling, built-in echo, as if sailing forth from the speakers of an old cathedral-style radio.

When the performance is finished, we realize that we're watching a cartoon within a cartoon: Chomet pulls back to show us an old woman, Madame Souza, and her young grandchild -- he is known only as "Champion" -- who are watching this strange relic on TV. We're not in a Parisian cartoon nightclub circa 1930, but in a small house somewhere in mid-'60s France. This is the setup for "The Triplets of Belleville," a story about the Tour de France, feisty old ladies, and one big fat dog, perhaps not necessarily in that order.

If "The Triplets of Belleville" is any indication, Chomet, who was born in France and has lived in Canada since 1993, is one of the most inventive animators we've got. ("Triplets" is Chomet's first feature. He also made the 1996 animated short "The Old Lady and the Pigeons," and is a writer and illustrator of book-length comics as well.) The narrative of "Triplets" doesn't always stand up to its visual effectiveness: In other words, the story and the look of the thing don't meld as well as they should -- the emotional universe they create for us isn't as compelling as that of, say, the Nick Park "Wallace & Gromit" cartoons. And although "Triplets" sometimes moves like a waking dream, the action often takes disappointingly conventional turns. We're very aware that we're watching a cartoon, as opposed to being scooped up and swept, like willing captives, into an alternative world.

But "Triplets" is still captivating to watch, largely thanks to the charm of Chomet's line-drawing style. He finds novel ways to show the passage of time: The simple house that Madame Souza, young Champion and their tubby dog, Bruno, live in is taller than it is wide, a pretty, modest dwelling that sits on the outskirts of town. In a swift, graceful segue, Chomet shows us how it changes over the years, becoming cramped and crowded by other buildings and by power lines, eventually being nudged aside, like a miniature Leaning Tower of Pisa, by an elevated train track.

Chomet uses graphic shapes as a kind of visual shorthand: The calves and legs of a disciplined cyclist look like giant flesh-colored hams, while the rest of his body is a wiry formation of paper-clip angles. An explosion of frogs erupts from a pond as a stylized shower of fingers and toes and eyes and legs. A pair of look-alike gangster twins share the same black cube of a body -- they move in tandem, melded into one blocky, brainless rectangle.

There's not a whole lot of character development in "Triplets," but you might not miss it much. Champion, the boy we meet in the movie's early scenes, isn't really the center of the movie at all: He's an athletic machine more than a character. But his grandmother, Madame Souza, in all her good-natured crankiness, is very real. Her no-nonsense devotion to her grandson -- who has gotten himself into a bit of trouble while riding the Tour de France -- is bottomless. With her sturdy, matronly shape, her one clumpy, built-up shoe, and her huge, observant eyes lurking behind wire-rimmed glasses (they make a little "click" every time she pushes them back onto the bridge of her nose), Madame Souza is an Old World granny who refuses to be bullied.

But it's Bruno, the chunky brown dog, who's really the star of "Triplets." Bruno looks less like a dog than an oversize sausage with legs, and Madame Souza subjects him to all sorts of indignities. At one point, she uses him as a spare tire on her truck; other times, she merely grabs onto his tail, harnessing his energy so she won't have to exert herself.

But Bruno, with a sigh and a grunt and a beleaguered look in his eye, is happy to do whatever it takes to save his master. In one of the movie's most memorable scenes, he and Madame Souza take to the high seas in a paddle-boat, chasing after a very tall (and very evil-looking) ocean liner. Chomet works wonders with perspective and scale: Their boat is tiny, compared with the huge ship they're chasing and the even larger waves that swell and heave beneath and around them. But they paddle away tirelessly and with fierce concentration, eventually docking at their destination and continuing on their adventure.

Madame Souza and Bruno move with the fierce certainty that only cartoon characters are capable of, always knowing that, even if one of them should be enlisted for use as a tire, they'll always be able to pop back into shape. "The Triplets of Belleville" is an equally confident feat of animation, one that feels at once modern and comfortingly old-fashioned. Chomet bows to the tradition of conventional animation even as he tests its limits. He's an old-school artist who's happy to pedal into the future instead of racing toward it. His movie still has one wheel in the last century, and happily, that seems to be just the way he likes it.