The schmaltzy paeans to motherhood that crowd my in-box are supposed to be "inspirational." But what they're really saying is it sucks to be me. 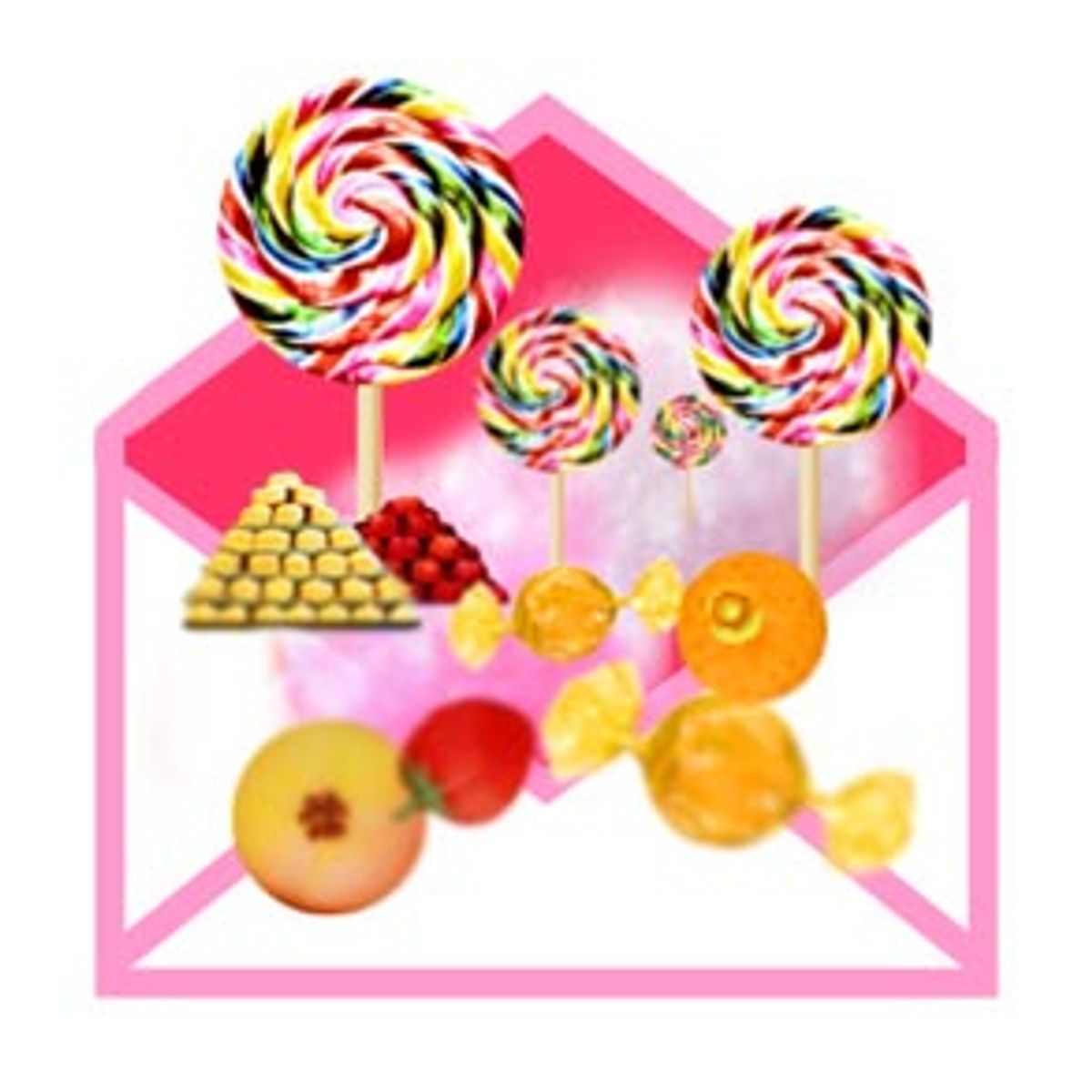 I gather I'm supposed to be -- what, amused? touched? -- right from the e-mail message's opening line:

"This is for all the mothers who have sat up all night with sick toddlers in their arms, wiping up barf laced with Kraft dinner and wieners, birthday cake and cherry Kool-Aid, saying, 'It's OK honey, Mommy's here.'"

Whatever reaction this provokes, it seems intended to be positive. It's supposed to be inspirational, to make me feel good about being a mom. If regurgitated junk food doesn't do the trick, I'm invited to savor other poignant moments: Walking the floors with a colicky infant. Shivering on the sidelines at kids' sporting events. Trying to subdue a screaming toddler in the grocery store...

In case these mothering challenges are wearing me down, the message -- which I received several times this year, under titles such as "Motherhood" and "Happy Mother's Day" -- offers encouragement. "Hang in there," it says.

Paeans to motherhood have been popping up in my e-mail in box for years -- ever since I had kids and got online, which happened at roughly the same time. Some are full of wisecracks, like Erma Bombeck or Roseanne. But most are sentimental, waxing syrupy amid the puddles of vomit. This one started out as a column in a small-city newspaper, where its tone was more cheerfully empathetic and less aggressively saccharine. As it made its way through cyberspace, it was embellished and rearranged on who-knows-how-many keyboards.

"Please pass this to a wonderful mother you know," someone has added, in closing.

Whoever sends out these mommy mails apparently wants to cheer me up. They want to boost my self-esteem, which they assume is flatlining. They want to reassure me -- God knows, they think, no one else will -- that although I am but a lowly mother, I am valued. My suffering is noble. Not for nothing do I forfeit my comfort, my leisure and perhaps my financial security. Yes, I have jettisoned my dreams, but for a glorious cause.

Funny how, after reading these messages, I don't find myself knuckling away tears of wistful joy. Funny how I feel more like, oh, faking my own death, putting on a wig and shades, ripping open my first pack of cigarettes in 15 years, and boarding a bus for some windswept little Western town where nobody would know me and I could get an apartment above the pawnshop and start a new life.

After arranging for a baby sitter.

The origins of mommy mails are mysterious. Few are signed or attributed, though in some cases versions with names attached can be hunted down on the Web. They aren't spam. They are forwarded to me by people I know, mothers themselves who, in turn, have received them from mothers they know. By the time I see them -- sometimes the same ones, over and over -- these messages have passed through many in boxes. Perhaps some come from Web sites such as Inspirational Stories, which offer browse-able collections of motivational messages on mothering (and other topics). Though some of the pieces on that site come with bylines attached, most of the mommy mails with which I'm familiar are marked "Author Unknown."

Whether cute or religious or maudlin, mommy mails profess to celebrate the wonders of motherhood. Underneath, though, many share the same disturbing subtext. It sucks to be you, they imply. But luckily, you're a martyr.

That's the way I read them, anyway. Take the perennially popular one titled "...That of Being a Mother," which -- though sent to me numerous times unsigned -- is elsewhere attributed to an author of religious and inspirational books. Here a young woman announces that she's thinking of starting a family. Her mother (in other versions it's a friend who already has kids), tears welling, wonders whether to reveal what lies ahead.

"I want to tell her that the physical wounds of child bearing will heal, but that becoming a mother will leave her with an emotional wound so raw that she will forever be vulnerable," the older woman muses.

She contemplates how her daughter's career will be "derailed by motherhood." How "her life, now so important, will be of less value to her." How she will want to hang in there anyway -- "not to accomplish her own dreams," which apparently have also plunged in value, "but to watch her child accomplish theirs" (unless that child is a girl, I guess, who may have children herself someday and be expected to forget about her dreams, too...).

The mother weighs these sacrifices against a quick recap of motherhood's rewards ("the exhilaration of seeing your child learn to ride a bike ... the belly laugh of a baby who is touching the soft fur of a dog or a cat for the first time") and makes her decision. It's no contest.

"'You'll never regret it,' I finally say. Then I reach across the table, squeeze my daughter's hand and offer a silent prayer for her, and for me, and for all of the mere mortal women who stumble their way into this most wonderful of callings."

My problem with mommy mails isn't that they exaggerate the downsides of motherhood. I've had my own horrific experiences with vomit, freezing sports events, and grocery-store blowups. Probably all three in one day.

No, what creeps me out is how average mothers are presented as shouldering these burdens with an air of acceptance that falls somewhere between Stepford-like and saintly. These mothers do not complain. They endure the indignities, weather the abuse, tackle the drudgery, surrender their dreams with tears in their eyes and smiles on their lips, never forgetting they are pursuing the "most wonderful of callings."

So where does this leave those of us "mere mortal women" who have responded, at least on the tougher days, with yelling or muttered profanity? Or who, more importantly, insist on clinging to a few dreams of our own? Mommy mails do not acknowledge our existence.

Occasionally, though, mommy mails hint that these scarily stoic women are not always thrilled with their lives. In "Why Women Cry," which I received two or three times in the past year, a boy catches his mother weeping and asks why. "Because I'm a woman," she replies. The kid, understandably still baffled, asks God why is mother is weeping. The Almighty explains that every woman is granted the ability to "take care of her family through sickness and fatigue without complaining," as well as the stamina to put up with the children "who hurt her very badly" and the husband who "tests her strengths and her resolve to stand beside him unfalteringly."

Usually, women deal. But for the really tough times, God adds, they receive "a tear ... to use whenever it is needed." He makes it sound a little like a cyanide pill.

Mommy mails may read like propaganda for motherhood, a type of motherhood dimly recalled from some not-quite-real past. But deconstruct these woeful tales, and you notice they make motherhood sound like hell, while suggesting that mothers like it that way -- or should. Whatever the senders think they're doing, I don't believe these messages are pro-motherhood at all.

Yet I have to keep reminding myself of this. Because damned if they don't haunt me, those virtuous mothers from the mommy mails. They may endlessly forgive their errant family members, but they're not so easy on other mothers. They hover over me like reproachful angels, frowning and gently shaking their heads whenever I yell or complain or sneak off to read rather than squat on the floor with action figures. They set the standards for "good" mothers -- and, by omission, define the shadowy territory occupied by the rest of us. Against my will and my better judgment, they have insinuated themselves into my conscience. They are a mechanism -- though not the only one -- for keeping mothers in line.

Which, I sometimes suspect, is exactly what they're intended to do.

But hey, lately a new kind of mom-related e-mail message has been appearing in my in box. They're not sent by friends. They're not at all poignant. But I will say this: The subject lines are novel.

If there's some dark Freudian explanation for this, I don't want to hear it. I prefer to think it's only for nice reasons that, to some minds at least, the word "mom" evokes not a pathetic exploited wretch or a paragon of virtue but, well, a hot babe.

One of these messages put it simply: "Moms like to have fun too," the subject line said.

Reading it, I almost had tears in my eyes.

Katy Read is a writer in Minneapolis.