Drudge does the Democrats a favor

A misrepresentation by the right-wing gossipmonger draws hundreds of high-powered Hollywood liberals to a beat-Bush meeting Tuesday night. 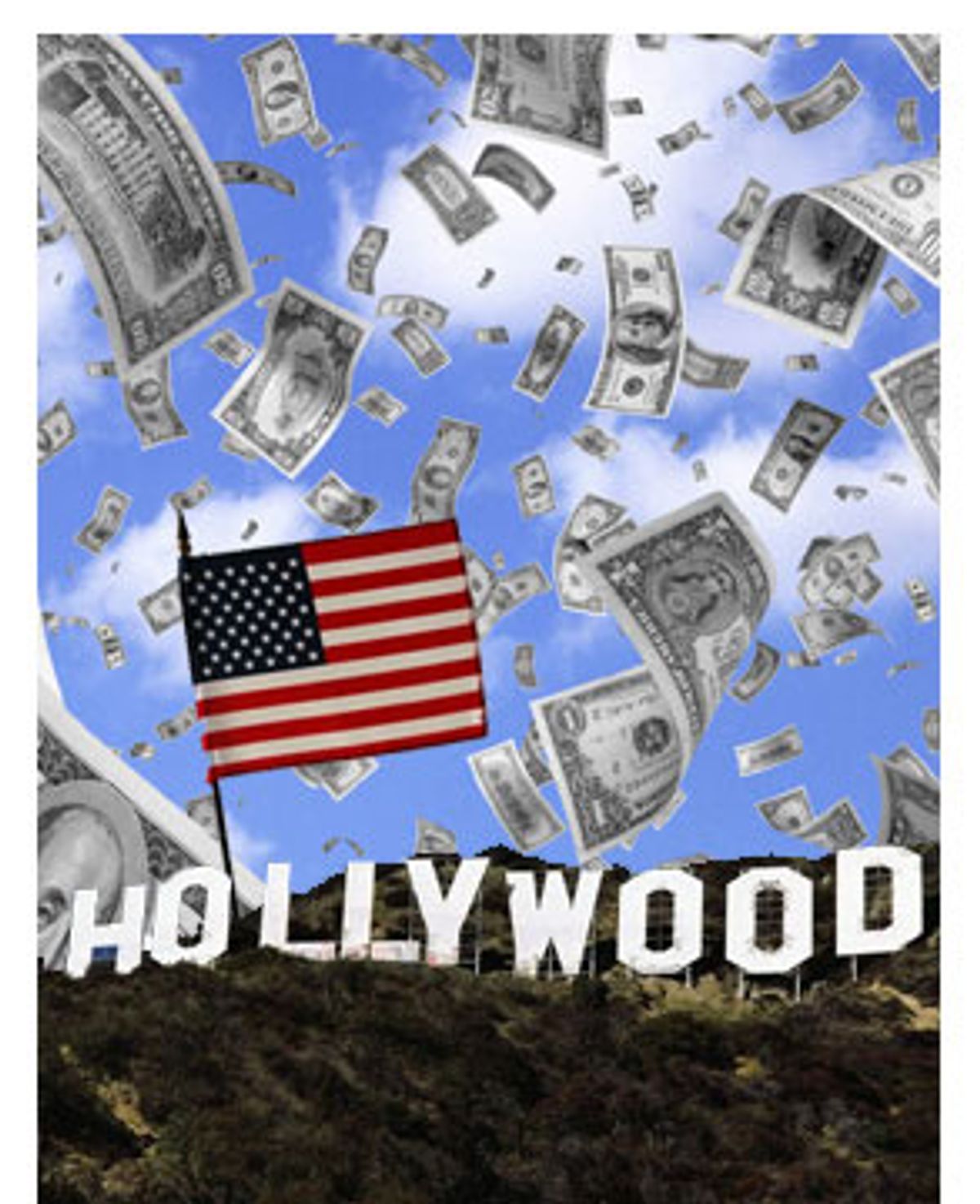 OK, so maybe David was being just a little bit facetious. Maybe she won't be zipping down to Whole Foods tonight for baking soda and a bag of chocolate chips. But the fact is, David owes Drudge today. And so does everyone else hoping to beat Bush in 2004. The reason: Through hyperbole bordering on misrepresentation, Drudge turned what should have been a small meet-and-greet session for two pro-Democratic political organizations into a star-studded spectacle of publicity and support for the groups.

Earlier this week, Drudge began trumpeting the news of a "Hate Bush" meeting planned for Hollywood Tuesday night. In a breathless "exclusive" report, Drudge claimed that "top Hollywood activists and intellectuals" were planning to "gather in Beverly Hills for an event billed as 'Hate Bush.'" Recovering addict Rush Limbaugh played along with the tune, warning of a coming confab by a bunch of "left coast Hollywood kooks" and suggesting that the likes of Jane Fonda would be involved.

The event to which they referred was something less -- and, ultimately, something more -- than they suggested. It was, in fact, an informational presentation by America Coming Together and The Media Fund, two groups working to raise money -- and spend it -- in support of the Democratic candidate in the 2004 presidential race. Organizers expected about 100 politically active Southern Californians to turn out for the event Tuesday at the Beverly Hills Hilton. But with Drudge and Limbaugh on the rampage, approximately three times as many Hollywood Democrats made the scene.

Actor Ed Asner was there. So was director Rob Reiner and "The West Wing" creator Aaron Sorkin, producer Lawrence Bender and actress Christine Lahti. "There were so many people there that we had to change rooms, and we had to turn people away," said David, who organized the event and was one of its celebrity hosts. "There were people from every part of Hollywood there -- celebrities, producers, agents, line people, directors, political activists. It was amazing."

And by the time the presentation was over, David said, many in the crowd were ready to write checks to Joint Victory Campaign 2004, the groups' collaborative project aimed at getting the message -- and the vote -- out in 17 swing states between now and November.

America Coming Together, founded by former AFL-CIO political director Steve Rosenthal and Emily's List president Ellen Malcolm, and The Media Fund, led by former Clinton campaign chief Harold Ickes, are two examples of a new breed of political organization, groups aligned but not directly affiliated with political parties. The McCain-Feingold campaign finance reform law prohibits "soft money" contributions to the political parties themselves, but it does not prevent big-money donors from giving money to ostensibly independent groups that -- coincidentally or not -- happen to advance the political agenda of one party or the other.

Republicans have begun to investigate and attack these "527" groups -- so named for the tax code provision that applies to them. The Republican-led House Administration Committee is investigating whether the groups really are independent from the political parties with which they are aligned. After several of the groups declined "invitations" to appear at one of the committee's hearings, the Republicans on the committee voted to give its chairman, Ohio Rep. Bob Ney, the authority to subpoena them to testify.

A spokesman for Ney said Wednesday that he is considering his next step. "He has some basic questions about whether or not they're coordinating with" the political parties, said Brian Walsh, Ney's press aide.

Steve Weiss, a spokesman for the Center for Responsive Politics, said McCain-Feingold was supposed to address the "corrupting influence" of soft money pouring directly into party coffers. The concern about the 527s, he said, is that "they're so closely affiliated with the political parties and run by former party operatives" that they may be a way for the parties to skirt the McCain-Feingold prohibitions.

"These groups are in many cases just a hair's width of distinction from the political parties," Weiss said. "The people who support McCain-Feingold would say that the corrupting influence of the soft money dollars is still there."

Lorraine Voles, a former spokeswoman for Vice President Al Gore who now serves as a consultant for America Coming Together, said that the group is operating within the rules established by McCain-Feingold. And she said the negative attention from the right -- first from the House committee, now from Drudge -- is a sign that these groups have the Republicans worried, despite the fact that Bush has already raised more than $85 million for his reelection campaign, three times more than any Democratic challenger. "We're clearly doing something right," Voles said Wednesday. "We've definitely got their attention."

On its Web site Wednesday, America Coming Together talked of its plans to "inform and mobilize" voters in 2004, and it asked its supporters to help spread the word and solicit contributions. In a dig at Drudge and Limbaugh, Malcolm wrote, "We won't count on the conservatives to keep up the free publicity forever."

In the backlash that preceded the meeting this week, David saw something beyond Republican fear at work. She saw signs of the right's ever-increasing hostility to all things Hollywood. "I think that, for some reason, Hollywood is a hot-button for people," she said. "People on the right, in particular, go out of their way to try to marginalize anything that comes out of this community. But they will not succeed because regardless of whether you're a celebrity or not, you have the right to speak and have a meeting and discuss politics."

As for whether or not Tuesday's get-together was in fact the "Hate Bush" event Drudge described, David says that she never called it that. Still, she says of the current White House resident: "If you're not angry, you're not paying attention."