Tom Cruise learns about honor, twirls those pointy sticks with the poise of a drum majorette, and seeks spiritual enlightenment in this deadly boring would-be epic. 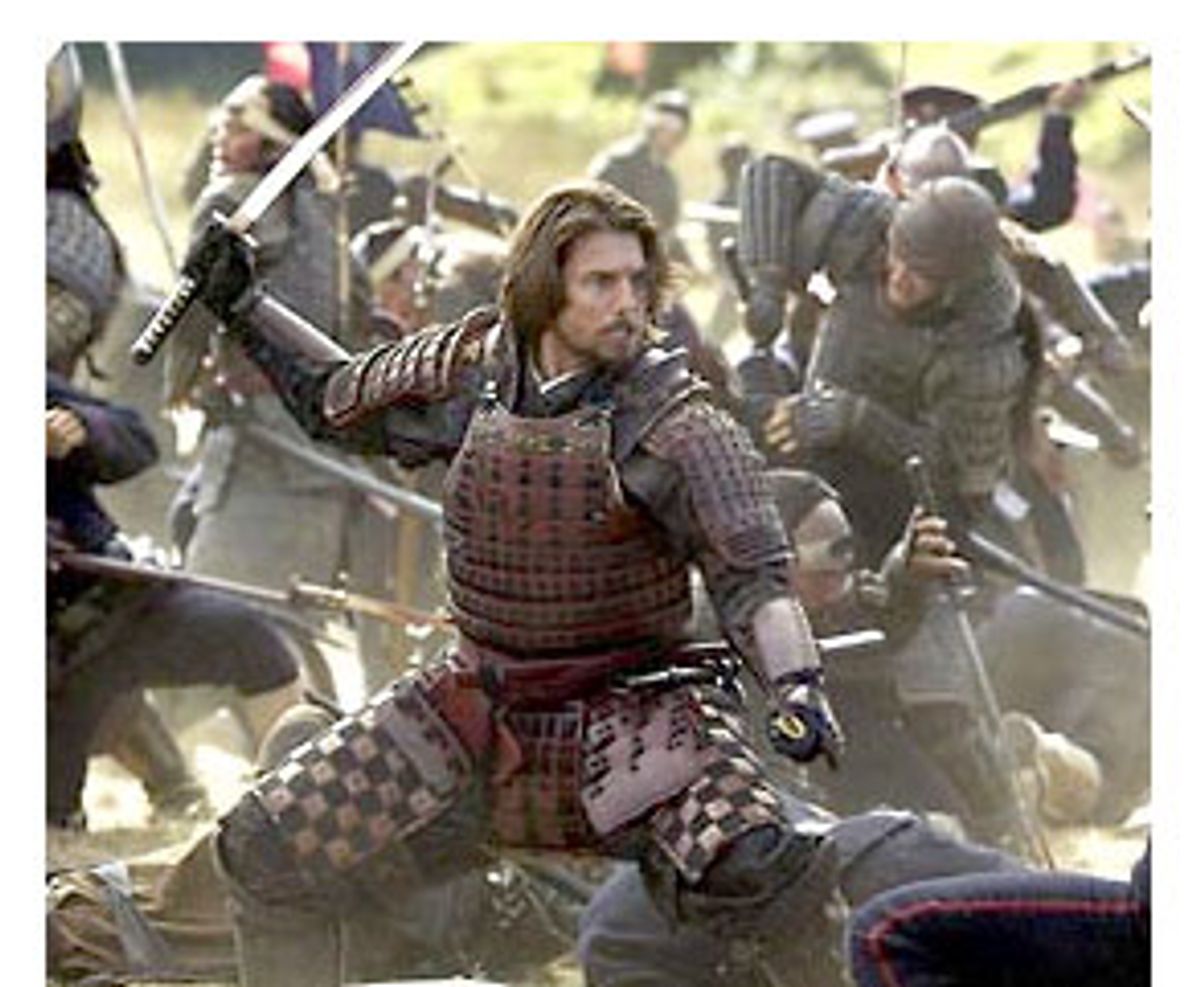 "The Last Samurai" isn't a star vehicle; it's a star tricycle. Tom Cruise plays a disillusioned, booze-sozzled Civil War vet, circa 1876, hired out to teach the eager-to-Westernize Japanese a thing or two about guns and stuff. In his first battle in the Land of the Rising Sun, he's captured by a group of samurai warriors, who bring him to their modest, austere community and teach him -- politely -- to bathe more often and to remove his shoes when he enters a house, among other things. Awestruck by the samurai's dedication to the simple life, and by their sense of honor in battle, he institutes sweeping changes in his own life, swapping his officer's coat for a comfy robe, laying off the sauce, and learning to wave a big stick around even better than Mark Hamill did.

Cruise pedals hard through "The Last Samurai," and the exertion shows. In fact, the whole picture is belabored and lumbering. "The Last Samurai" is designed to be big and historical, and it certainly feels like an epic, with all those fabulous vistas of mountains wreathed in wispy clouds and jagged roads that look lifted from an ancient painting on rice-paper scrolls. (John Toll, who also shot "Braveheart," is the cinematographer.) Yet even in the midst of all that centuries-old richness, there's something pinched and tinny about this movie. Cruise's character, Capt. Nathan Algren, writes of the samurai in his journal (we hear the words in a somber voice-over), "They are an intriguing people. From the moment they wake, they devote themselves to the perfection of everything they do," an observation accompanied by a visual of an old man stirring a pot, or making a pot, or something like that.

It takes a man of character to see the nobility of pot stirring, and that's a far cry from the earlier version of Algren we've seen. (In his job as a Winchester rifle demonstrator, back in the US of A, he'd wow noisy crowds with his macho marksmanship, barking the praises of his weapon's "smooth cocking action.") What a transformation this fellow has undergone! Spiritually, sartorially, warrior-ly. Only a stone could be unroused by it.

But then, a stone would have the good sense to sleep through it. There's a rueful lesson at the heart of "The Last Samurai": We Americans helped the Japanese destroy the old ways; we taught them the basics of modern warfare, which, some 65 years later, they turned upon us. The irony flows freely in "The Last Samurai," and we're invited to take a good, long drink. Director Edward Zwick ("Glory," "Legends of the Fall"), working from a script by John Logan and Marshall Herskovitz, has made a picture that vibrates with good taste; it wears its prestige like armor that's been polished to a thin, Oscary sheen. Which isn't to say the picture looks cheap -- the problem is that you never become engaged enough with the characters to forget how expensive it looks.

And it's not even all that exciting. The movie's early battle is supposed to be thrilling -- it needs to be thrilling to suggest the risk Algren is taking by going against these fearsome warriors. The music rallies us, sounding much mightier than the action we're seeing on-screen. When Cruise utters a battle cry, it sounds pinched and forced -- there's nothing in his voice or his demeanor to suggest even latent heroism. Bodies fly hither and thither, after being pierced by the samurai's mighty whatsits. It's Little Big Horn done Big Little Book-style.

Thanks to some fast-thinking nut-kicking, and his ability to twirl a pointy flagpole with the skill of a Texas majorette, Algren survives, and after that, the movie embarks on a stately march that lasts a long, long time. Algren passes the time, his and ours, by writing in his journal and sharing his deep thoughts in voice-over: "I am beset by the ironies of my life," he muses at one point. Later, he explains the nuances of Gen. George Custer to one of his samurai captors, showing a dazzling political correctness that's years ahead of its time: "He was a murderer who fell in love with his own legend."

Time passes; the seasons change. The chicken-scrawl in my notes for the movie reads, "Snow, robes, boring," which pretty much sums it up. This is just the kind of movie the National Board of Review -- a mystery group with ancient, mysterious origins who don their pointy-hooded black robes each winter to choose the best pictures of the year, after which they hold a gala, star-studded black mass at Tavern on the Green -- usually falls for. And, as surely as sand dribbles through an hourglass, they have, voting it the No. 2 movie of the year (after Clint Eastwood's "Mystic River").

There are some good performances in "The Last Samurai," held out to us like wet sponges on a sharpened stick, and we're grateful for them. Ken Watanabe is Katsumoto, the samurai leader, and he gives the role plenty of gravity while also coming off as a real human being. And any movie that Timothy Spall appears in is all the better for it: Here he plays translator and photographer Simon Graham, an Englishman transplanted to Japan, and the movie jiggles to life in his few brief scenes. (When he discovers that Algren knows something of languages, he exclaims with rapt delight, "A fellow linguist? Oh, capital!")

But mostly, "The Last Samurai" is just "Dances With Cruise," and the steps are enough to wear you out. I can't, even after all these years, bring myself to hate Cruise: He has next to nothing to give as an actor, other than a smirking stiffness. But he so badly wants to be an actor -- a good one -- instead of just a star that I can't help feeling some sympathy for him. Toned down and relaxed (as relaxed as he ever could be), he was enjoyable to watch in Cameron Crowe's "Jerry Maguire."

But with Cruise, the gears are always turning, and he wears them on the outside for everyone to see. He's deadly in "serious" roles like this one, where he clamps down on the mood as if it were a chew toy and refuses to let go. Like the samurai he so admires, he devotes himself to the perfection of everything he does, but the result is assembly-line rigidity, not hand-wrought elegance. And in the end, he's dwarfed by the faux-grandeur of "The Last Samurai" anyway. It's a benumbed epic with an action figure for a hero.