Jesus of the tenements 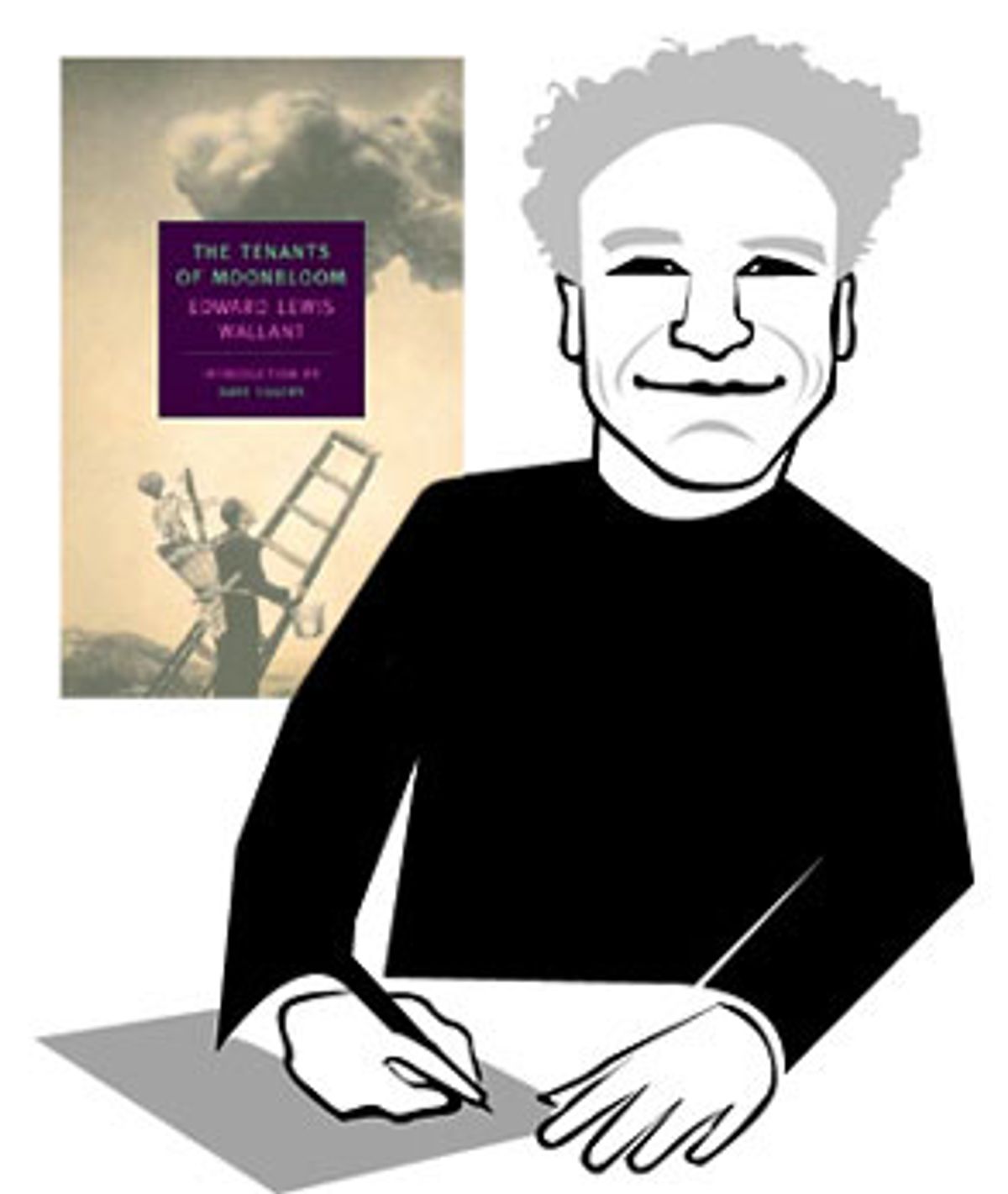 The photo of Edward Lewis Wallant most common in biographical sketches shows a very young man in a suit, handsome, neatly coiffed and looking away, with his brows converged in an expression of watchful concern. There is a softness about his face that seems to demand trust. It is the face of a young man who feels the world's inequities are his own, and feels compelled to try to fix them.

But that might be projection. The temptation after seeing this photo is to lend the face to the body of Norman Moonbloom, the protagonist of this book. It's the kind of face, compassionate but almost blank, that seems to fit. Moonbloom is the reluctant property agent for the Moonbloom Realty Corp., owned by his brother Irwin and comprising a small group of Manhattan apartment buildings. Norman regularly visits the many tenants with the hope of collecting rent. His own world is simple enough -- dreamy and impractical -- and so he becomes a kind of canvas onto which the tenants paint, with an Expressionist's rage and compassion, a picture of urban humanity. And though Moonbloom enters the book detached -- "He walked lightly and his face showed no awareness of all the thousands of people around him because he traveled in an eggshell through which came only subdued light and muffled sound" -- he's gradually pulled deep into the mess of lives lived in the buildings that bear his name.

Norman's rent-collecting rounds introduce us to a wild but wholly plausible menagerie of characters. Karloff, a German Jew, is over 100 years old, drinks schnapps dawn to dusk, and chooses to live in squalor. Stan Katz is a white jazz trumpeter who shares his rooms with Sidone, a gay black drummer who commonly answers the door unclothed. Wung, a young Chinese-American man, speaks like a hepcat and has a prolific and bohemian sex life, the details of which he shares with Moonbloom, without shame or pause. Norman becomes something like a cross between a psychiatrist making house calls and the tenants' father confessor. They tell him a startling amount about their lives, opening their doors for him to limn the rest. Joe Paxton, a black writer with protruding eyes, could be a James Baldwin manqué, while Wade Johnson, a rye-drinking English teacher trying to stay inspired, embodies the spirit of the Beats -- he rails against safe poetry, instead insisting on reading "The Waste Land" to poor Norman, who only wants the rent. Again and again Norman tries to extricate himself from the tenants' homes, concocting diversions and excuses to leave unmolested. One tenant, though, persuades him to stay a bit longer -- Sheryl, the sultry, kimono-wearing young woman whose clueless father doesn't realize what's happening -- and it does -- just under his nose.

Before Edward Lewis Wallant's death of an aneurysm at age 36, he published two novels -- "The Human Season" and "The Pawnbroker" -- while two others, "The Tenants of Moonbloom" and "The Children at the Gate," were released posthumously. He began writing seriously at 30, after serving in World War II, attending art school, and spending many years as an advertising art director in New York. In the short time he was writing -- about three years wherein he considered himself and was considered a serious writer -- he was counted among a brilliant group of postwar Jewish American writers, Bellow, Malamud, Mailer, and Roth among them. That Wallant died so young, unable to travel on with these writers, is criminal, especially given how prolific he was. But the novels he finished in his short life are all miniature masterpieces. "The Tenants of Moonbloom" is a particularly lovely book, lightly comic, frequently melancholy, carrying about it the unmistakable air of allegory.

Wallant's other posthumously published novel, "Children at the Gate," concerns the patients at a troubled city hospital, and in that book Wallant argues against their ability, in the face of disease, brutality and fate, to influence the outcome of their lives. "The Tenants of Moonbloom" is somewhat more optimistic. Though the tenants represent wildly different backgrounds, they all seem to have shaken free of imposed stereotypes and the accompanying fates that might have trapped them. The tenants inhabit apartments that are similar in dimension and systematic neglect but they create very different worlds within them. Some keep their apartments tidy and attractive, while others, their neighbors, dwell in filth. Common to all is the litany of complaints, from broken windows to dysfunctional stoves to rampant roaches and missing tiles, and it's Norman who must listen and then, given the paltry amount Irwin allows, make small repairs for those whose concerns are most pressing.

Wallant writes gorgeously, with prose that never overreaches, even as it leans toward the theatrical -- particularly in his tenants' frequent soliloquies. This is one area where Wallant's work departs from that of his young contemporaries, whose muscular naturalism he otherwise shares. His characters swing wildly between anguish and joy and are unafraid to let everyone know about it, clearly calling for help in many ways simultaneously. Wallant's prose shifts seamlessly between the spare, the ribald, and the relatively epic (Moonbloom is just a rent collector after all). The novel is sad, without being downbeat, and it teems with ambivalence.

About Norman's path to where we find him at the book's beginning, Wallant writes:

"He had gone to several universities ... and had found only curves and credits. He had become drunk on the idea of God and found only theology. He had risen several times on the subtle and powerful wings of lust, expectant of magnificence, achieving only discharge. A few times he had extended friendship with palpitating hope, only to find that no one quite knew what he had in mind. His solitude now was the result of his metabolism, that constant breathing in of joy and exhalation of sadness."

It's been noted that while his novels may tend toward the despairing, Wallant was actually an outgoing and cheerful man, happily married, with three small children. Surrounded by domestic contentment, he would sit at the kitchen table, writing. To research "Tenants of Moonbloom," Wallant lived for a time in a tenement downtown, and though the addresses of Moonbloom's buildings -- Mott Street, 70th Street, 13th Street -- are now pricey places to live, this wasn't the case in the 1950s. Instead, these places were shoddy, cramped boxes for humans to inhabit, and Wallant gives us a rather suffocating tableau; in each building, in each apartment, claustrophobia and decay rule. About the 13th Street tenement Wallant writes: "The house was squeezed breathless" by the surrounding warehouses, the block having the "gritty complexity of a broken rock." There are plenty of references to Dante's "Inferno" here, directly and otherwise, and while Wallant has great empathy for his characters, he doesn't pussyfoot around the fact that he sees them going to, if not already dwelling in, a version of Hell. Thus the book's lighting is dim, the smells pungent, the disrepair everywhere, with only Norman and the super, a black man named Gaylord, to do anything about it.

Moonbloom slowly buckles under the burden of the needs of the buildings' inhabitants. The pressure gets to him, and while attempting to stay within his brother's tight budget, and begging the patience of all, the death of one of the tenants, and the increasing volume of the tenants' demands, bring him to a point of crisis. He has to decide whether indeed, as he often states, he's "just an agent," or whether he bears a personal responsibility for improving, even if only slightly, the lives of his residents.

"All week he spent his evenings in the office, figuring his position in terms of dollars and cents; it seemed the only way to chart his personal latitude and longitude. Suddenly lost in a forest of lives, he yearned for a tabulator, longed for it as a mariner, adrift in a night without stars, might long for a sextant. By Saturday night, however, he had made a makeshift instrument from a week of plumber and electrician estimates."

In the end, Norman makes a decision, and with Gaylord embarks on a new path, one that promises a kind of salvation for his tenants.

"'I am no longer Norman Moonbloom,' he said aloud in the great privacy of the city night. And then, seeing the floral brilliance of windows and distant sign lights, he was suddenly confronted with a more terrible possibility, which made him bite the windy blackness and gasp, 'Or I never was.'"

Which leads us to the question: Is Norman a kind of Jesus? That's up to the reader to decide, though you should note that when we meet Norman, he's 33 and a virgin, and that he clearly shares with Christ a simultaneous revulsion and boundless love for his flock. Is there a rebirth scene, too? There is. But let's leave it at that.

When we think of urban novels of great humanistic scope, we tend to bring to mind long, mosaic-like books of Dickensian complexity oscillating wildly between fact and fiction and inclusive of the highest and lowest of society's echelons, and everyone -- and every location -- in between. But Wallant's New York novels -- all but "Children at the Gate," which is set in New England -- are less flashy, less sweeping, having about them a rumpled, slouching appearance, always with a dispirited man at their fulcrum. "All of Wallant's novels," Jonathan Baumbach has written, "have a similar, ritual structure: a man cut off from the source of himself, in a delicate truce with the nightmare of survival, slowly, terrifyingly, at the risk of everything, rediscovers the possibility of feeling." It should be noted that Moonbloom's epiphany comes without help of an interloping savior, or even a change of scenery. Wallant allows his heroes their renaissances without thrusting one upon them, and by keeping his canvas small and his characters without glamour or power, he gives us a portrait of New York that's unfortunately quite unfamiliar to many readers.

Or maybe not. This introduction is being written in the summer of 2003, just a week after the largest blackout in the history of the United States. Afterward, countless stories were told, broadcast and written about how the residents of New York City, among other metropolises, handled the crisis. A common picture showed the residents of a given apartment building sitting outside, on the sidewalk or on their stoops, into the night, sharing candles and flashlights, drinking and eating the food that would otherwise spoil. There were no riots, a negligible amount of looting, no violence and few deaths. The night reminded us all of just how interdependent, how docile even -- how perfectly calibrated in relation to each other -- the residents of a city like New York are, because they must be. Whatever rage and desperation festers within the millions who share such a city must be contained and mastered, because life otherwise is untenable, as would be life without our Moonblooms, soothing us, slightly but meaningfully, with their visitations and repairs.