What it means to be old

An extraordinary new book of photographs captures the diversity of America's elderly -- the giddy newlyweds, ballroom dancers, road-trippers, as well as the neglected and infirm. 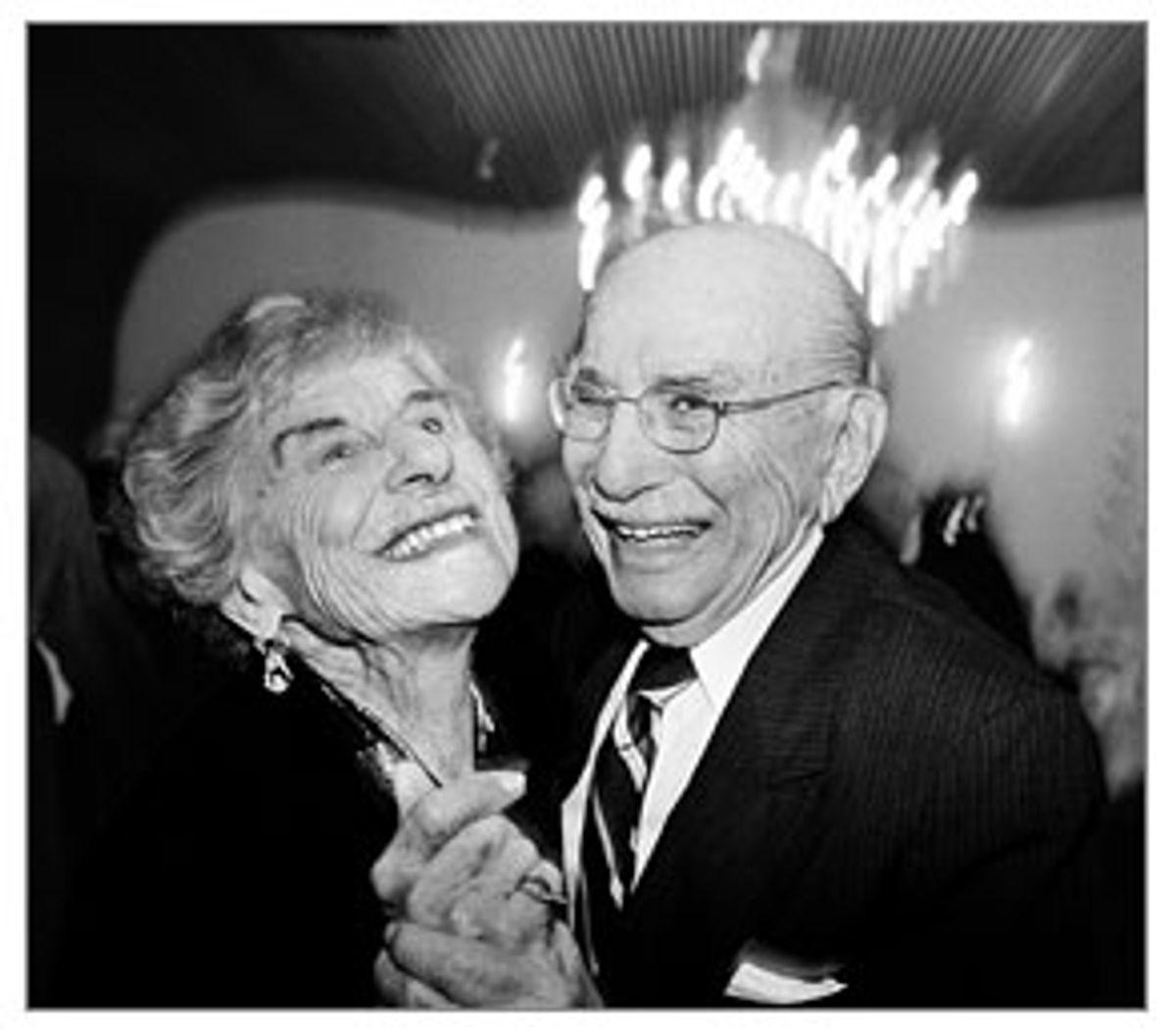 A shriveled man wearing running shorts and sneakers gracefully pole-vaults at the Senior Olympics. A 58-year-old woman in a thong spreads her legs in a wide split at the Miss Exotic World pageant. An elderly veteran, who suffers from arthritis, high blood pressure, and the aftereffects of a stroke, stands in his kitchen while his son swaddles him in a diaper. These are just a few of the bold, unflinching images in "Aging in America: The Years Ahead," a new book by photographer Ed Kashi and writer/producer Julie Winokur.

By mid-century there will be more Americans over 55 than under 18 -- a startling demographic shift that will have huge social, economic and cultural implications. With this in mind, Kashi and Winokur spent seven years traveling across the United States recording the stories and pictures of a segment of society that is often invisible: the aged. "We wanted to dispel myths about growing old," says Winokur. "Because too often the elderly are portrayed as caricatures rather than complex individuals."

"I believe we are the 'I' generation," says Yvonne Gardner, 69. She is on her way to an RV rally with the Loners of America, a club for single seniors. The Loners have three rules: you must love to travel, you must have some type of RV and you must be avowedly single. According to the bylaws, anyone who displays "coupling behavior" is out of the club.

"Most all of us got married relatively young," says Yvonne. "Then we had the children, so we always had to be giving and attentive to them. Then the children moved out and when we lost our mate, all of a sudden, we're all alone and it's the first time in our lives that we've ever been able to just think about us. I don't have to tell anybody what time I'm going to get up. If I want spaghetti for breakfast, I can have spaghetti for breakfast ... with garlic in it," explains Gardner.

As Gardner prepares her rig for a long day on the road, she says, "I still feel 45 or 50 or something. I haven't reached 'old.' I guess old to me is infirmity, when you can't do things and anywhere in between is not really old, it's aging or something like that."

After losing their mates, Ricky Caminetti and Gerald Gross discovered that it's never too late to fall in love. "When we went down to get our license, they couldn't believe that a 1914 was marrying a 1918," says Gerald. "I lost my wife a year ago. I called Ricky and asked her if she'd like to have dinner. We had dinner. And two weeks later, I was engaged."

Ricky, a religious woman, refused to sleep with her fiancé until they married. "There's a big spark there," admits Gerald, three days before their wedding. "We hug, we kiss, we squeeze. We do everything ..."

"Except," she cuts him off. Gerald shrugs his shoulders.

"I have a hip replacement. I have a prostate removed. But I'm still moving and that's what counts." Manning is one of the original Lindy Hoppers from the Savoy ballroom in Harlem, and at the age of 89 he still teaches sold-out workshops all over the world. "I don't actually think about what I can do or what I don't do. I just do what I can and enjoy life."

Frankie danced in the reviews of Billie Holiday, Duke Ellington and all the greats of the jazz and bebop era. He has lived long enough to see his art form go in and out of style several times. A whole new crop of devotees attend his birthday celebration every year, where he dances with as many women as his age. He often dances with two women at a time to meet his quota.

"Though I didn't see him fall, I heard it and it was a terrible sound," says Virginia Magrath about her husband, John's, recent accident. "He fell backwards against the bathtub and hit the back of his head. That was the worst night in my life."

A blood clot formed in John's brain and aggressive surgery did nothing to alleviate the problem. Virginia sat vigil by John's side night and day in the hospital for three weeks. She dealt with doctors and nurses around the clock and faced a lot of frustration trying to advocate for her husband. "Doctors ignore you entirely if you're old and there's somebody younger around. Like they would talk to my daughters, and they wouldn't look at me, they wouldn't direct anything they said to me. And I have said, on more than one occasion, 'I am his wife. Talk to me.' And they do, then."

Falls are the fifth leading cause of death for older adults, and after a grueling three weeks it became apparent that John would not get better. "John was blind and he had dementia. He had nothing to live for, no good life ahead of him," explains Virginia. "It seemed that was the point when we should let nature take its course."

Photojournalist Ed Kashi has covered stories for the National Geographic and other major magazines throughout the Middle East. He is the author of "When the Borders Bleed: The Struggle of the Kurds" (Pantheon).