Alicia Keys beats the odds, avoiding a Lauryn Hill flameout (or a Britney travesty) with the simple and joyous retro-soul of her new album. 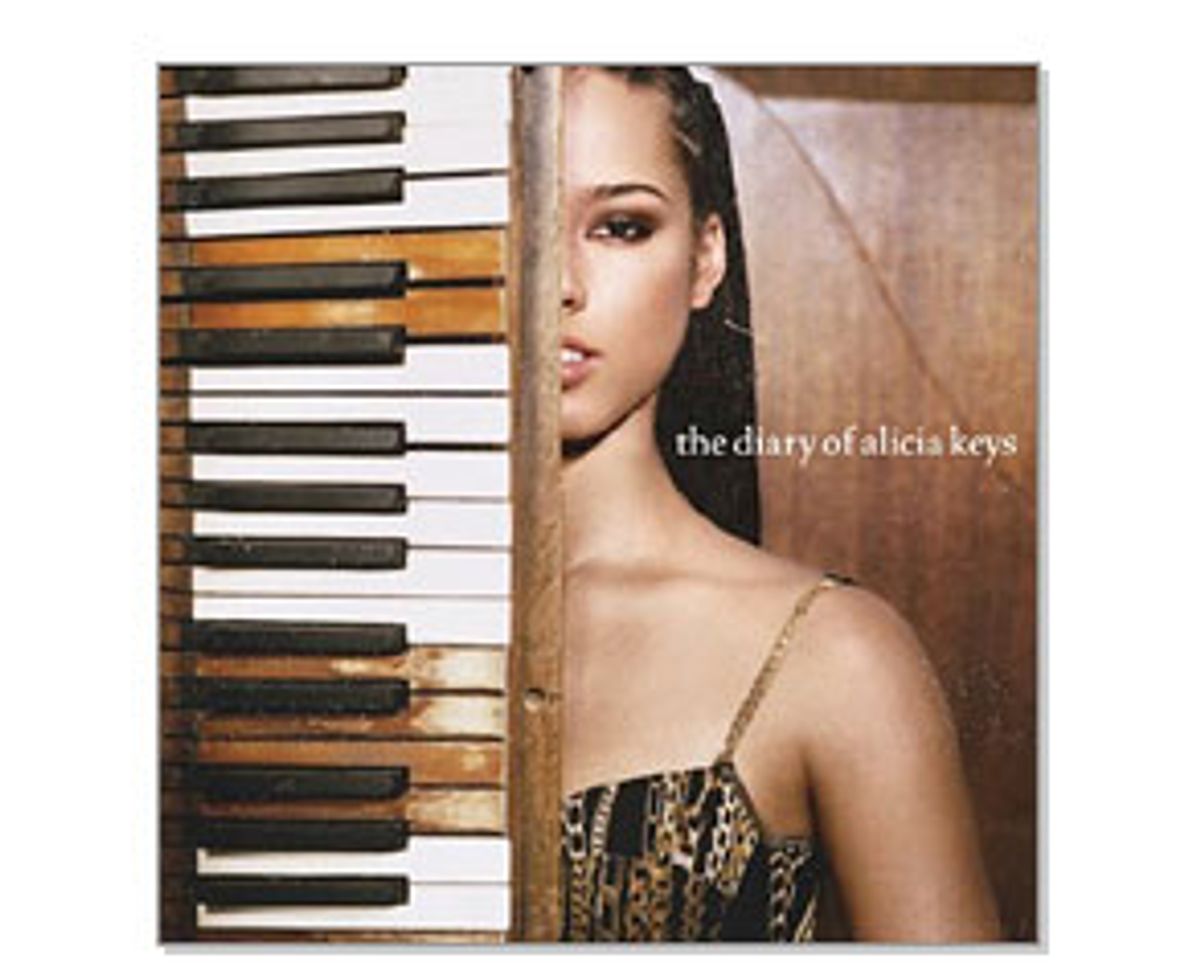 This PYT was rewarded with universal acclaim -- which, in real-world terms, means five Grammy awards. Glimmering statuettes in hand, she posed gorgeously for the press; then, with the music world at her feet, she disappeared into that land where artists go (the studio) eager to do what artists do (record a sophomore album). Fans salivated, anxiously awaiting their musical treat.

The album came; it was no treat. What, everyone asked, had spoiled such a good thing? The creative autonomy that came with fame, which allowed her to overindulge herself? Or perhaps the opposite: She had buckled under the onerous, restraining load of excess celebrity. Greedy fans, cheated of a precious follow-up, lamented their loss. Critics, meanwhile, dismantled the very pedestal they'd erected.

This is not the story of Alicia Keys; it's actually that of Lauryn Hill, ex-Fugees rap/R&B sensation. But if not for "The Diary of Alicia Keys" -- a joy of a second album -- it certainly could have been Keys' story. Both women, after all, recorded stunning debuts that earned them five Grammys, including awards for best new artist. Both were deemed heirs to the legacy of classic soul; both sold millions of records; and both had the industry wrapped around fine-looking fingers.

Perhaps because Hill's letdown of a follow-up ("MTV Unplugged No. 2.0") revealed the pressures inherent in instant greatness, Keys' anticipated return made folks nervous. Ironically, the fact that she was so good made marketing Alicia Keys harder than one might expect: If you nearly achieve perfection with your debut, where do you go from there?

Music marketing, after all, has a one-word mantra: Growth. Artists and their various representatives live by the claim that so-and-so's latest release exhibits artistic evolution. New releases are touted via an artist's literal growth, too: Christina Aguilera's upper region magically grew in time for "Stripped"; every post-debut Britney Spears album has been marketed as the one on which the pop princess -- no longer a girl and not yet a woman (or, wait, is she one by now?) -- has finally grown up. But Alicia Keys, at 22, is already more grown than Britney and Christina put together. We haven't gorged on tabloid photos of her either, nor have we been forced to watch her making out with Madonna and calling it maturity. What sort of growth could Alicia Keys possibly boast of?

Thankfully, none. "The Diary of Alicia Keys" is a superb album because Keys and her camp remembered that if it ain't broke, you don't have to fix it. The initial sign that all was as it should be -- in other words, as it was in 2001, when "Songs in A Minor" was released -- is Keys' current single, "You Don't Know My Name." Hearing its retro-sounding first notes -- Keys murmuring "baby, baby, baby" in dreamy tones, evoking '60s soul -- I exhaled. No seismic shift had occurred! This was the same Alicia we knew and loved. The song's sultry video was -- glory be! -- more of the same: Alicia, still in braids, still stunning, still sitting at the piano, still the chic-est thugette in New York. The video's only indication that Alicia has been moving on up is its cameo from A-list rapper/actor Mos Def. But hey, even thug princesses have to network.

"The Diary of Alicia Keys" is proof that it doesn't take a newer, raunchier look -- or a gimmicky all-grown-up-now persona -- to stage an artist's return. Much as I hate to be yet another critic clocking in at the Alicia Keys altar, I can't deny that sheer talent speaks for itself.

Three things make "The Diary of Alicia Keys" an album that will last. The first is -- what else? -- piano. Yes, it's rather irritating that piano playing has been turned into Keys' shtick. The album has its share of gratuitous keyboard moments, and photos of the damn thing are plastered all over her promotional material. But gimmicks aside, Keys can work those keys. A quality producer in her own right, she also does an impressive job of incorporating them into songs like "Karma," on which her hard vocals are reminiscent of Mary J. Blige's, or "If I Ain't Got You," a simple, soft ballad that's classic Keys.

Simplicity is the album's second successful ingredient. Keys is no extraordinary writer; her lyrics are neither profound nor eminently spiritual. Hallelujah! The music world needs fewer attempts at profundity and more plain, honest beauty. Keys lets her singing voice say it all; it's a voice that can soar, whisper, moan and belt. On paper, a song like "When You Really Love Someone" seems trite, indeed: "I'm a woman, Lord knows it's hard/ I need a real man to give me what I need," she begins. Or take "Dragon Days," on which Keys declares herself a "damsel in distress" and moans, "like a desert needs water, I need you a lot."

But "You make me feel like a natural woman" isn't exactly Yeats, either. Its art lies in its delivery. Keys, like Aretha Franklin, could sing the yellow pages and make them sound profound. Instead, she sings little songs about desire and heartache and a lover who leaves ("Samsonite Man," she calls him, on one touching track) -- but transforms them, via a voice that has integrity and passion, into big, beautiful tracks that seem classic already. Unlike such R&B divas as Monica or the latter-day Mary J. -- whose songs are complaints about ne'er-do-well suitors put to music -- Keys forgoes whining in favor of stoic complacency and sincere empathy.

As if playing humble, Keys persistently complements her voice with subtle background vocals -- the third secret ingredient on "Diary." Well-timed backup -- especially on the Timbaland-produced "Heartburn," which sounds straight outta "Shaft," or any other movie that Isaac Hayes wrote the score for -- lends the album its much-touted retro feel. Keys clearly has the right musical mentors, past and present, and possesses a musical sense well beyond her years, as well as an innate understanding of the word "classic." But listening to "The Diary of Alicia Keys," and silently giving thanks that this media darling hasn't gone off the creative deep end, you're not likely to think of what came before. All you hear is that voice, the one that not even critical acclaim could damage.