A reaction to vaccinations, including anthrax, probably killed 22-year-old Rachael Lacy -- and her grieving father thinks the Army has a lot of questions to answer. 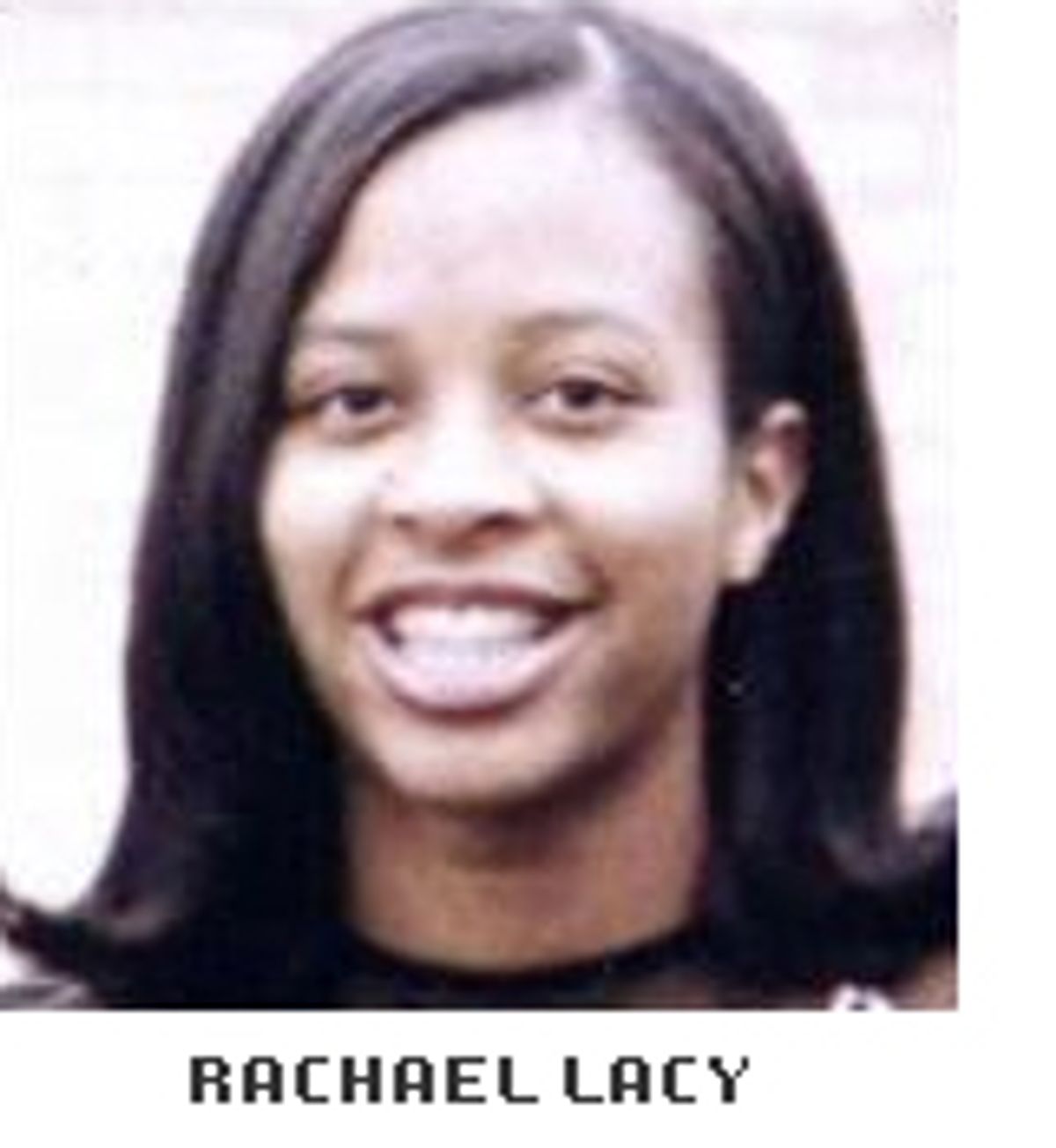 Eight months ago his oldest daughter, 22-year-old Rachael, died in a Minnesota hospital from what Army doctors said was pneumonia. Instead, it's likely her body swiftly rebelled against the vaccinations the Army gave her, including an anthrax shot, on the eve of her deployment to Iraq. The result was an amazingly swift and unstoppable physical decline.

"I'm just a wreck," says the father. "I went one time to her burial site because it needed some tending, she deserves to have a site that's pretty. But it took a lot of courage to do that. I avoid looking at her pictures in the house, but I can't take them down."

No doubt his anguish mirrors the pain and grief that parents of the other nearly 500 U.S. soldiers killed in association with the Iraq war feel today, especially as the emotional holiday season approaches. But Lacy's daughter's death is different: It was caused not by enemy fire, but probably by a controversial vaccination program.

In a phone interview from his home in Lynwood, Ill., just south of Chicago, Lacy talked about his daughter's perplexing death and the special pain that surrounds her memory. The hurt is especially piercing because his oldest son was shot dead five years ago, also at the age of 22. "I lost them both," he says with a sob. "My youngest son is afraid to turn 22, he thinks there's some omen attached."

Lacy's unlikely death, which garnered just a few headlines at the time last April, would likely have faded from memory for everyone outside her immediate circle of family and friends. But her passing took on added significance when a rash of similar, mysterious pneumonia-type cases were soon reported among troops serving in Iraq. In death, Rachael's case highlighted dangers that may be associated with the military's mandatory vaccination program, including the controversial anthrax inoculation.

To date, nearly 100 Operation Iraqi Freedom soldiers, all of whom received the shots, have been rushed to hospitals with potentially life-threatening pneumonia cases, and at least two have died, according to the Pentagon.

Lacy, who lived at home with her parents and was studying to become a nurse at nearby South Suburban College, got called up for active duty in December. "I felt in my heart she'd be all right in the war," remembers Lacy, 52, a safety manager for the Metra commuter rail service in Chicago who served in the military as a young man. "When she was activated, I told her, 'You'll be OK because I put you under God's protection.' If she went to Iraq, I knew she was coming back home."

On March 2, she received her vaccination shots at Fort McCoy, Wis., where she and her unit were preparing for overseas deployment. Within days her normally healthy body began its extraordinary deterioration. She ached all over, and worse, was having trouble breathing. Over time she was diagnosed on the Army base with pneumonia.

"And there lies the problem," says Lacy, who describes his daughter as a straight-A student and born leader. "Because people on the base were not trained well enough to recognize adverse reaction to vaccine. If I'm running a clinic that's administering multiple vaccines, is it that far-fetched that my doctors should at least know when a person is having an adverse reactions? If I know this and I have a simple college degree, isn't it logical that those people more learned than me should know this?"

Eventually, the Army base sent her to a hospital in nearby Lacrosse, Wis., where she continued to be treated for pneumonia. The antibiotics doctors prescribed had no effect, as her condition rapidly worsened. Looking back, Lacy is still baffled why doctors, he says, did not seriously consider the possibility of a vaccine reaction. He's convinced that "if they would have realized that it was vaccine reactions, they would have given her steroids and she'd be here today."

Eventually she was flown to the Mayo Clinic in Rochester, Minn., where she died two weeks later. The sad truth is it appears the first doctor to make a direct connection between Rachael's condition and the vaccination was the Minnesota coroner who performed her autopsy. He listed "post-vaccine" problems on the death certificate. As he told the Army Times last spring, "It's just very suspicious in my mind that she's healthy, gets the vaccinations and then dies a couple weeks later."

Indeed, for months the Pentagon, which had been playing defense over the anthrax vaccine for years, denied the inoculation had anything to do with her death. It wasn't until last month that the military conceded that it was "possible" and "probable" the vaccinations caused Rachael's death. The Pentagon suggested her death might have been due to an underlying immune disorder that was triggered by one or more vaccines. (Turner stresses the final evaluation pointed toward "vaccines," plural, and did not single out anthrax.) But the military maintains her case was rare and would not alter the vaccine program.

"I'm pleased that they admitted it was possible and probable," says Lacy. "Does it resolve my hurt and pain and sorrow? No sir, it does not. But what's a father to do at this point? My daughter suffered. She was sick and in a lot of pain and discomfort for five weeks, and then she died."

"The only reason for the Lacy admission was the military lost control of the evidence," suggests John Richardson, a retired lieutenant colonel in the U.S. Air Force Reserve. "Normally, the sick soldier is treated in a military hospital, and they do the autopsy. But because she was a reservist she was sent to Mayo Clinic, and was attended by civilian physicians. What the Department of Defense did was follow its M.O.: deny for seven months and then assert the death or illness was unique."

Despite assurances from Assistant Secretary of Defense for Health Affairs William Winkenwerder Jr. that the pneumonia rate among GIs was "consistent with what we would have expected," the Pentagon this summer nonetheless launched an investigation into the more than 100 cases of mysterious pneumonia-like illnesses among troops in Iraq and in Southwest Asia.

To the surprise of many, Lacy's death was not included in the pneumonia study. The Pentagon said that was because she was never deployed, so her case did not fit the pattern. But the pattern it did fit was of a service member who received the anthrax shot and then became deathly ill. It was just that Lacy's immune system gave way stateside, rather than overseas.

"Look at the common denominator," says her father. "I believe it's awfully curious for them to have exactly the same symptoms as my daughters described. Is that a coincidence?"

During an hourlong press conference in August discussing the pneumonia cases, top Pentagon officials never once mentioned the word "vaccine." And Col. Robert DeFraites, the surgeon general's senior preventive-medicine physician, told reporters, "No vaccines cause pneumonia as a side effect." But as UPI noted, a 2002 medical journal article found that the vaccine was the "possible or probable" cause of pneumonia among two soldiers.

By September, the Pentagon announced its doctors had an early lead on what caused the pneumonia cases: cigarette smoking, not the anthrax vaccine.

"That's absurd. They refuse to consider the obvious reason: the vaccination," says Dr. John Buck, who in 2001 became the first military physician court-martialed for refusing to take the anthrax shots.

On Thanksgiving Day, Rachael's GI boyfriend, serving in Afghanistan, called Lacy to tell the family his unit had named its base camp in honor of his fallen daughter. "I would like to get a photograph of Camp Lacy," says the father through his sobs. "Because she deserves it. She was destined for greatness, she was. And she died serving her country."