J. Steven Griles, the No. 2 man in Bush's Interior Department, has spent a lifetime undermining the federal government on behalf of Energy Inc. 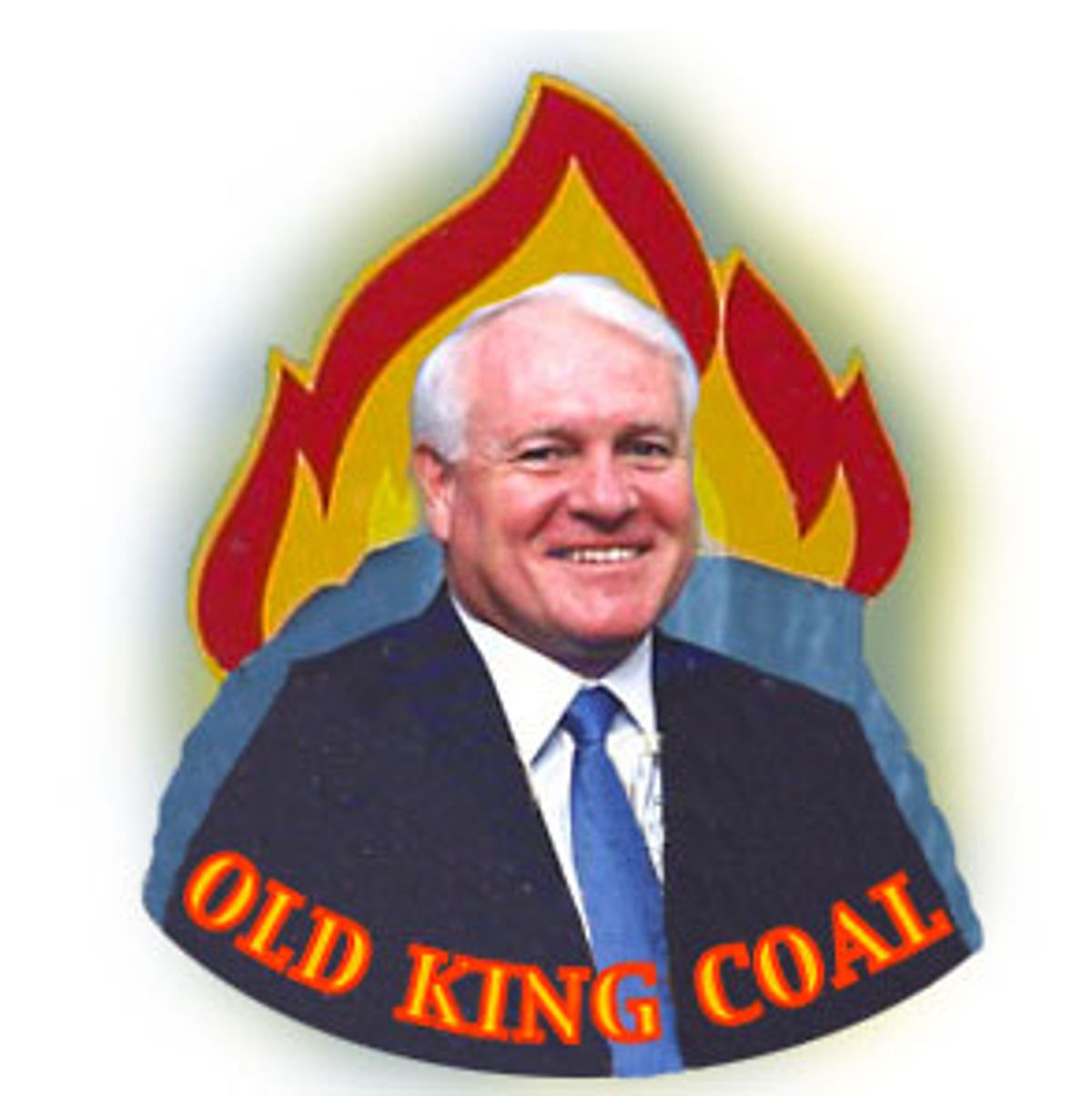 It's part of the lore at the federal Office of Surface Mining (OSM) -- a unit of the Department of the Interior that regulates the mining industry -- that J. Steven Griles once said that he "wanted to turn the lights out" at the agency. Griles, who today is deputy secretary of the interior, served as the No. 2 man at the Office of Surface Mining under President Reagan, and his comment was music to industry ears: Mining companies had been gunning for the office ever since it came into being in 1977.

In press reports over the years, Griles has neither confirmed nor denied the comment. But the record speaks for itself. As OSM's deputy director, Griles slashed staffing by one-third and dramatically reduced the number of federal inspectors at mine sites.

Ancient history? Fast-forward to 2003: Griles, now in an even more senior position at Interior, is being investigated by the department's inspector general for allegedly violating an ethics agreement. That investigation offers a fresh opportunity to look at Griles' 20-plus-year career as an industry-friendly political appointee and high-powered industry lobbyist. That career appears to have had one primary focus: get government out of the regulation business -- and when you can't do that, get mining executives into government regulation.

When the oil, coal and gas industries poured millions of dollars into George W. Bush's presidential campaign, J. Steven Griles was exactly what they were paying for. He's a perfect embodiment of the Bush administration's "never met an energy company we didn't like" stance -- and its revolving-door connection between an industry eager to slip free of government rules and a government eager to betray the public good. But then it's no surprise someone like Griles would receive a warm embrace from the Bush team; after all, it is packed to the brim with energy-industry insiders -- from National Security Advisor Condoleezza Rice to Vice President Dick Cheney to President Bush himself.

Griles formally recused himself "from becoming involved in official matters dealing with [his] former employers and clients" when he was confirmed by the U.S. Senate for Interior's No. 2 post on July 12, 2001. Previously, the deputy secretary had lobbied for Shell, Texaco, Chevron, Arch Coal, Pittston Coal, the National Mining Association and the Edison Electric Institute, to name just a few of Griles' former clients. In April 2003, Sen. Joseph Lieberman, D-Conn., requested that the DOI inspector general investigate whether Griles violated his ethics agreement when several questionable meetings were reported in the press.

Sykes says that a particularly revealing meeting took place on April 15, 2002, a dinner at the house of Marc Himmelstein. A business partner of Griles', Himmelstein bought Griles' lobbying firm when Griles joined the Bush administration. Himmelstein folded the firm into his own lobbying outfit, National Environmental Strategies, of which Griles was a principal partner. Currently, Griles is receiving $284,000 annually from National Environmental Strategies over four years as payment for his old client base.

Among the small group of people in attendance at the Himmelstein dinner were Kathleen Clark, director of the Bureau of Land Management, who herself is the subject of an ethics investigation by the DOI's inspector general for alleged conflicts of interest; and Jeffrey Jarrett, director of the Office of Surface Mining, a former coal company executive who was the subject of a criminal probe for obstructing an OSM investigation while he was at the agency in the early 1990s.

But the inquiry into whether Deputy Secretary Griles met with former clients and associates is only the tip of the iceberg. Griles is a key player in efforts by industry and anti-regulation ideologues to strip away regulatory and enforcement powers from the federal government, according to current and former DOI officials closely familiar with the deputy's career.

After his stint as deputy director of the Office of Surface Mining from 1981 to 1983, Griles moved up the chain of command in Reagan's Interior Department -- headed by the infamous anti-environmentalist James Watt -- first as a deputy assistant secretary and then as assistant secretary of the interior. According to DOI officials, Griles worked aggressively to bring industry-friendly personnel into the agency. One such example is Jeffrey Jarrett.

A former manager at Cravat Coal and Drummond Coal, Jarrett joined the Office of Surface Mining in 1988. He came to work for Carl Close, the regional director of OSM's eastern division. But he wasn't Close's first choice; he was fifth on a list of 10.

"There's a detailed review process," says Close. "I interviewed all the applicants, prioritized them, and sent my recommendations in to Steve Griles. This is usually routine." What ensued was anything but routine.

A few years after his selection, Jarrett narrowly avoided criminal charges for obstructing an OSM investigation in an apparent attempt to discredit the agency. Jarrett had made a series of harassing phone calls to community organizers while OSM was in the process of assessing whether coal mine blasting was responsible for property damage in Evansville, Ind. He also tampered with a personnel file, according to internal documents. Instead of facing disciplinary action, Jarrett was reassigned to another division.

The incident came back to haunt Jarrett and Griles in the fall of 2001. Griles personally recommended Jarrett for the directorship of the Office of Surface Mining, and Interior Secretary Gale Norton -- who called Jarrett the "perfect choice" -- forwarded the name to President Bush. On Oct. 3, 2001, the Senate Committee on Energy and Natural Resources abruptly aborted its confirmation hearing on Jarrett when a red flag popped up in his FBI file -- the Evansville matter. Ultimately, however, the Senate confirmed Jarrett's nomination.

For those who have worked to enforce federal mining regulations, Jarrett's confirmation is a bitter reminder of Griles' political reach. During the Reagan administration Griles was known as a hatchet man, firing or transferring regulators he deemed to be pro-environment, according to former DOI officials. He also sought to transfer regulatory authority to the states. By the time the Clinton administration took over, surface mining regulation had been "eviscerated," says a member of Clinton's transition team at the Department of the Interior.

On regulatory matters, Deputy Secretary Griles has repeatedly gone to bat for mining, gas and oil companies. He's pushed for a more speedy permit review process for mountaintop removal mining operations, the reintroduction of offshore oil drilling near the California coast, and the tapping of tens of thousands of natural gas wells in Montana. As an example, Griles criticized a draft Environmental Impact Statement that concluded that mountaintop removal operations -- the blasting of mountains to reach coal -- would destroy the Appalachian environment. In an Oct. 5, 2001, memo, Griles wrote that the study should instead "focus on centralizing and streamlining coal mine permitting."

The threat to the Appalachians is very real, according to a longtime DOI official, and might explain Griles' urgency to issue mountaintop removal permits. The DOI official estimates that there are only 10 to 20 years left of coal in the Appalachians that can be economically mined using current methods. "The big coal companies want to get their permits now to make sure they get the last of that coal," said the official.

One month after Griles' October 2001 memo, coal companies contributed $150,350 in soft money to the Republican National Committee, according to the nonprofit environmental law firm Earthjustice. The oil, gas, mining and electric utilities industries chipped in about $50 million in campaign contributions to help George W. Bush get into the White House during the 2000 election.

According to the Center for Responsive Politics, a nonpartisan organization that tracks campaign contributions, Bush has raised more than $84.5 million for the 2004 election. The energy and natural resources industries have donated about $1.8 million to the Bush-Cheney 2004 ticket so far. The Bush-Cheney team is expected to raise and spend a record-smashing $200 million for the 2004 campaign.

Griles was unavailable for comment for this article. Mark Pfeifle, press secretary for the Department of the Interior, says that Deputy Secretary Griles has behaved "ethically and professionally," and that the allegations against his boss are unfounded.

"What you're seeing is a lot of accusations from special interest groups that have a partisan bent," said Pfeifle.

There's no word on when the DOI inspector general's office will issue its report on the Griles matter. Those concerned about how the DOI manages the nation's natural resources -- the department oversees one-fifth of the land in the United States and nearly one-third of the country's energy reserves -- are anxiously awaiting the results.

"We'd like to see Griles removed from office," says Kristen Sykes of Friends of the Earth. "He's represented special interests, not the public's interest, and he's doing what's best for his corporate buddies, not what's best for the American people."

Phillip Babich is an investigative journalist based in the San Francisco Area. His articles have appeared in Salon, TomPaine.com, and Pacific News Service. His work as a radio producer has been heard on "Making Contact," Pacifica Radio, NPR, CBC, CBS, and AP. He's also a 2003 grant recipient from the Fund for Investigative Journalism.