BECAUSE I SAID SO!!

A new study says that yelling at your children -- even if you're trying to protect them -- is "psychological aggression." 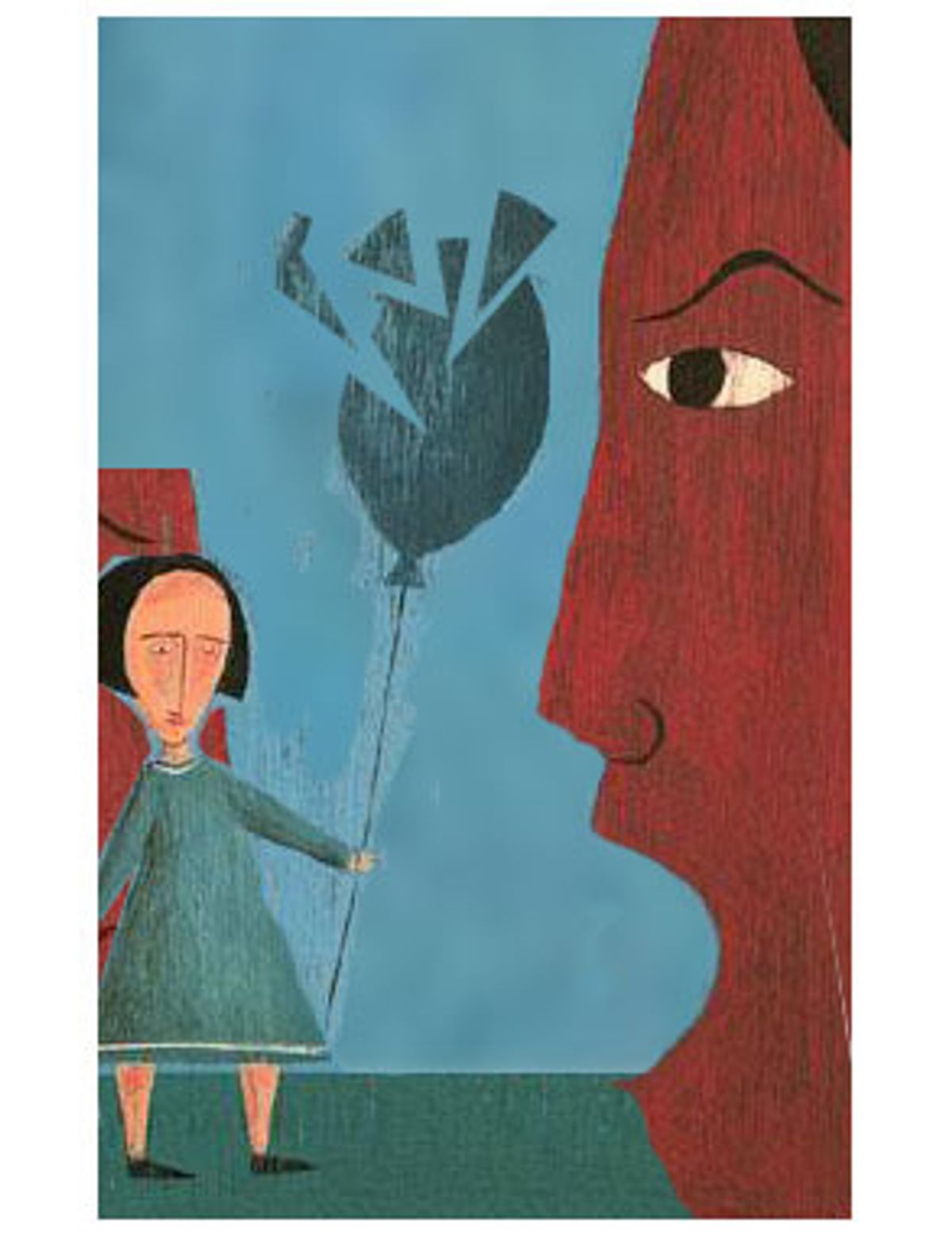 The day my daughter was born changed me profoundly. The first time -- when, in her toddlerhood, I saw her squeezing Legos through a heating vent into our furnace -- I screamed "Stop that!" after more gently spoken pleas went ignored was also a pivotal day in my life. According to renowned sociologist Murray Straus, that was the day I became an "abusive" parent.

Needless to say, it came as quite a shock to find out there were bona fide family experts who would consider my behavior toward my daughter, the most important person in my life, cruel. Yet according to Straus, yelling at my daughter even that one time was "abuse the moment it [was] done."

A few weeks ago, the respected Journal of Marriage and Family published a study by Straus and his colleague Carolyn Field that reports that "psychological aggression" toward children is "so prevalent as to be just about universal." This is the result of a telephone survey of 991 parents, 98 percent of whom admitted to using "psychological aggression" against their child by age 7. While the researchers' definition of "psychological aggression" includes such inarguably objectionable acts as calling your children obscene names and threatening to throw them out of the house, it also includes actions that most parents regard as a normal part of raising kids -- shouting and yelling. In fact, the 2 percent who came off completely clean in the study probably either lied or have nannies who do the hollering for them.

The tone of Straus and Field's report is unrelenting. They do not distinguish between different forms of communication -- harmful invective like "I wish you had never been born!" as opposed to "Do your homework now!" pleas. In their view, it also doesn't seem to make a difference if parents scream at their children constantly, or just get loud once in a while. They say, "We believe it should be never." While admitting that even the best of parents can sometimes lose their temper and get a bit snappish, they are sure to add, "This provides an explanation for some psychological aggression, not a justification."

Upon first reading the study, I was incredulous; could the authors truly believe that occasional yelling would damage my child? I contacted Straus in Belgium, where he is currently teaching, in hopes of getting some clarification. "Any yelling or screaming is bad parenting," he said, quite clearly. "It is not, in my opinion, a humane mode of family relationship." So now not only was I "psychologically aggressive" toward my daughter, but I was also "inhumane" -- a term I'd always associated with POW camps and cockfights.

I kept searching for some kind of caveat to Straus' all-out ban on shouting but never found one. Not even motivation seems to matter. Couldn't you get a free pass for yelling at your children out of frustration or concern as opposed to assaulting them with a malicious verbal attack that is intended to berate and belittle? "Because it is the lesser of two evils," Straus told me, "does not make it not an evil."

And yet, resolute as he is in his thesis, he admits there is still research to be done. "There is no empirical evidence," he told me, "to support either my hypothesis or the view of critics." But we're still supposed to feel guilty about it.

In the study itself, the researchers admit their reluctance to label psychological aggression as "abuse" -- mostly because there are legal definitions of abuse that some psychological aggression would not fit into -- but Straus didn't shy away from that word in the accompanying press release or in his interview with me. He also told me he "would not see any downsides" to future laws against psychological aggression. Such forms of discipline are tolerated right now, he says, because they are society's norm (and certainly anything done by 98 percent of the population qualifies as a "norm"). "The expansion of humanitarian rights that has occurred in respect to other areas of childhood, such as child labor," he said, "suggests that it is possible that the norms will change."

And there you have it. Shouting "How many times have we told you to stop eating Mommy's lipstick?" is on a par with manacling your kindergartner to a rusty antique Singer in the basement of a factory and forcing her to stitch up knockoff D&G handbags for 18 hours a day.

While Straus and Field certainly didn't create the blame-the-parents-first atmosphere that has begun to blanket our country, with this study they've supplied a diaper's load of fodder for all those people suffering from concerned-neighbor syndrome, the ones who seem to believe that the nation's children should be raised by an army of omnipotent Stepford parents, and who are ready to call in a SWAT team if they spot a mother who hasn't wiped her son's runny nose quickly enough.

There's not much a parent can do these days that doesn't bring on an onslaught of societal guilt. Letting kids cry is neglectful, letting them glimpse even a nanosecond of television is irresponsible, and putting them in day care is so awful the Brothers Grimm wouldn't use it as a plot device. You would think there's enough genuine abuse in the world that we could cut some slack to a father who accidentally lets his vocabulary lapse into PG-13 as the stroller rolls over his toe, but apparently not.

I can't count the number of times my wife was reprimanded, while our daughter was still in utero, for not exhibiting the mental tranquility of a Zen monk. "Stress can do horrible things to your baby," was the constant refrain -- one backed up by hordes of obstetricians across the nation. That, of course, only led her to become stressed out about becoming stressed out. When caring, responsible, attentive mothers can be made to feel like lousy parents before their children are even born, things have gone too far. It's as if the best caregivers would have to be unfeeling, unemotional automatons. Mr. Spock has replaced Dr. Spock, and an impossible standard is being set.

Raising a child is pressure enough without having to suddenly worry about your decibel level as your 2-year-old decides that the keyboard of your iMac might like a drink of milk. You don't need to curse at her, or berate her, or threaten to kick her out of the house (which would be a pretty nasty thing to do to a toddler). You may even admire her compassion with regard to your computer's thirst. But you also might shout at her -- intentionally or not -- to get her attention, to make sure she stops, and to underscore the message that mixing dairy products and expensive technology is a no-no. And even if the tone of your voice temporarily upsets her, chances are she'll get over it rather quickly. You don't need to start worrying that you've just crossed the line into Joan Crawford territory. And if anyone tells you that you should, well, I think that's psychological aggression.

Incidentally, after I yelled at my daughter that first time, she flashed me a big smile and giggled as if I had just put on an Elmo costume and done a headstand. Then she handed me back the Legos.