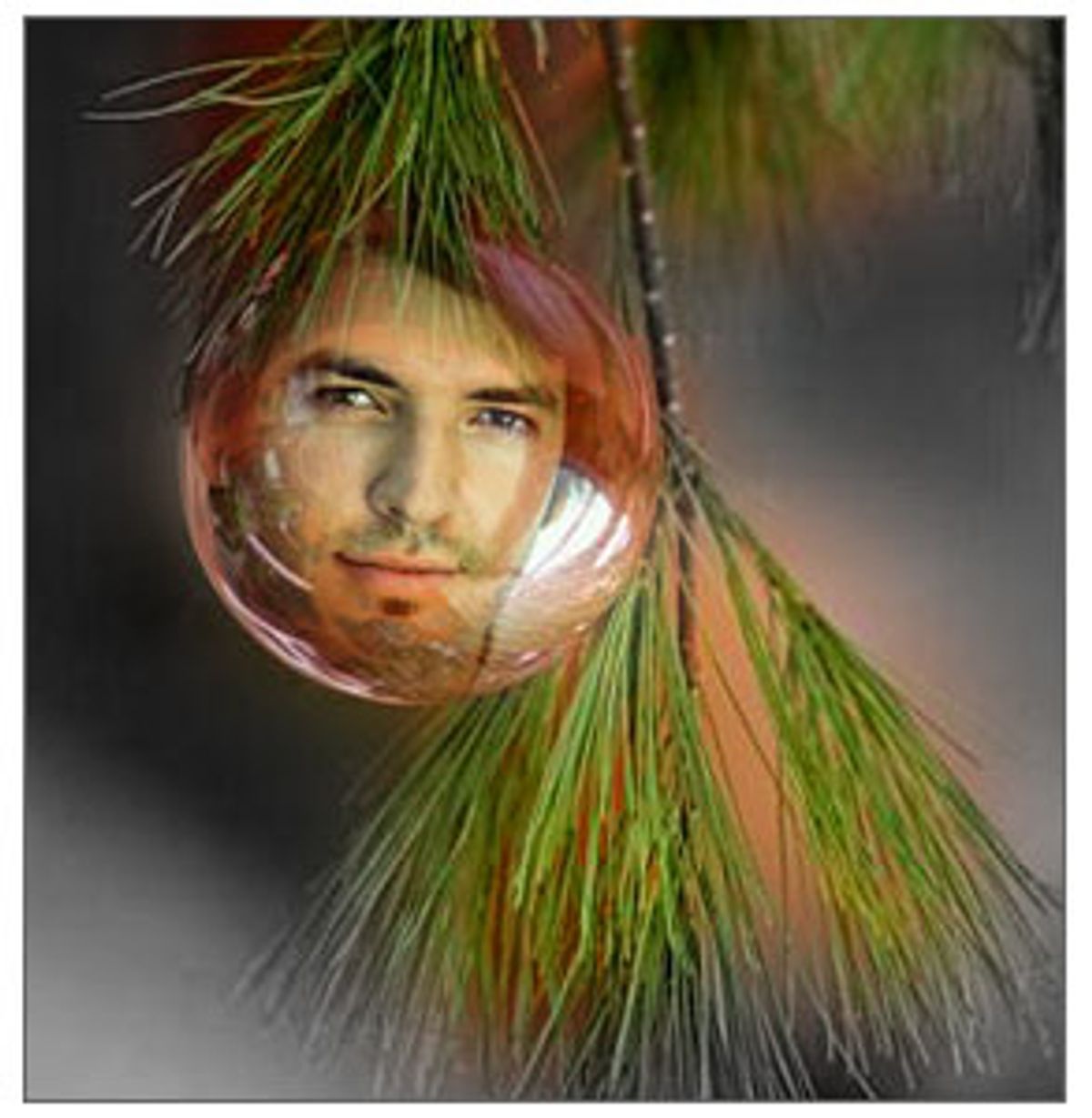 For one blissful month, I see these tall firm boys everywhere -- in dreary parking lots underneath optimistically striped tents, on sweetly scented tree farms that sidle up to two-lane roads north of the city. I even see them slouching curbside at the big discount chain stores. Truth be told, I could probably do without the tree, which is only going to shed and die, but as for the Christmas Tree Boys -- there'd be no Christmas without them.

Where do they come from, these strapping young men with their tight blue jeans, their big hands that smell of evergreen, their scuffed boots and tattered belts, their tousled hair sprinkled with pine straw? You can have your Nautilus men, your gym boys with their bubbling biceps and straining quads; in a test of strength and general stuff, I'll put my money on the Christmas Tree Boys, who make up for what they lack in bulk with their style and sex appeal.

Sadly, the older I get, the more forbidden they seem. They're so young, these holiday lumberjacks -- just boys, really, their faces still flushed from the stress of final exams. I see them and think of picket fences; surely sweet mothers await them with batches of gingerbread cookies, gallons of virgin eggnog. I think of their girlfriends too, who must be blond young things in ribbons and sweater sets. These boys, my lord, they seem to be of another century.

I remember my very first erotic encounter with a Christmas Tree Boy. It was on the Gulf Coast, a balmy winter in my 14th year. I'd driven to the outskirts of Mobile, Ala., with my parents and two sisters, and we'd just stepped out of the big yellow Galaxy 500 when I saw him. He was wearing a blue T-shirt with "Panthers" emblazoned across the chest, an old pair of form-fitting Levi's, and Converse low-tops with holes rubbed in the fabric. While my mother set out with my two sisters in search of the biggest tree and my father headed for the shabby discount ones huddled near the pump house, lumberjack boy sidled up to me, ran a hand through his thick black hair, and said, "Come on, I'll show you our prime stock."

Together we traipsed to the back 40. He had this Swiss Army Knife that he kept thwacking open and closed against his palm as he walked. At one point he drew blood -- just the tiniest trickle, but it was blood all right -- and as he brought his hand to his mouth and sucked at the fresh wound, I thought I'd be happy to give up telephone, TV and all my Madonna albums for five minutes alone with him. As we walked he asked me where I went to school, and what grade I was in, and if I had a boyfriend.

By the time we got to last year's trees -- the ones they'd never cut and that had grown too tall and wild to be smuggled into anyone's home -- both of us knew what we were after. He pulled me behind a Douglas fir and crushed his mouth against mine, and he'd already gotten my bra unhooked and slid one hand underneath the waistband of my jeans when I heard my mother calling my name. I scribbled my phone number on his forearm; he never called. To this day, I can't trim a tree without thinking of that boy's calloused fingers circling my nipples, his hand fumbling frantically with my button-fly.

Fifteen years after that first encounter, I found myself shopping for a tree one frigid December night in New York. It was a week before Christmas, and the snow had turned to ice. I didn't have a car, so a trip to a tree farm was out. Instead, I walked to the dirty neighborhood grocery store, Gristede's, where a ragtag band of jolly youths had set up shop by the curb. The kids were living in an old white van and selling scrawny trees on the sidewalk. The haphazard nature of their operation and the poor health of their trees did nothing to diminish the appeal of the Christmas Tree Boys.

It was a guy named Sven who sold me a little number not 2 feet tall that was nailed to a piece of plywood. As he wrapped the tree in newspaper, Sven winked at me and said, "So you won't hurt your hands on the needles, love." He had a slight and endearing accent -- Swedish, maybe, or possibly Finnish -- and his sweater was slightly off: too bright, too small, the kind of sweater no self-respecting New York City guy would ever wear. It occurred to me that perhaps, in New York, there weren't enough Christmas Tree Boys to go around, and so extras were imported each year from the small cold villages of Europe, where this type of boy surely exists in great number. I paid Sven 40 bucks (this was, after all, New York) and shook his big warm hand. That night I sat alone by my Charlie Brown tree and drank shot after shot of whiskey while visions of Christmas Tree Boys danced in my head.

I know for certain that I am not alone. What red-blooded American girl has not shuddered with delight at the sight of one of these woodsy, wondrous boys kneeling before the very tree she has chosen, sawing right through its hard brown heart to deliver that poor tree, its days now numbered, to her waiting trunk? Or, upon choosing a pre-cut tree from the lot, what otherwise faithful wife has not watched the boy sliding the tree through the bailing hoop and wished for a moment that she could be the tree, supine, submitting to his capable hands? Oh, one cannot help but think, to be tied up in just this way by him!

Unfortunately, the inevitable always happens: Christmas Eve comes, and the boys pack up their saws and gloves and Swiss Army Knives, their ropes and bailing wire. They climb into their trucks and drive away, a sweet scent of pine and wood chips lingering. And then there's the anticlimax of Christmas morning, a tree decked out in finery but devoid of any genuine sex appeal. That big green thing that once came shuddering and rustling from the brawny hands of some miraculous Christmas Tree Boy is nothing, on Christmas morning, but a gaudily glittering ornament. It is sad and somehow fitting that the holidays should end this way, with a tugging melancholy, followed by that tingly feeling in the gut and elsewhere -- a feeling that comes from knowing that, like Santa Claus and "It's a Wonderful Life," like the Macy's Day Sale and roasted chestnuts, the Christmas Tree Boys will be back next year. And while I'll be one year older, they'll be just the same as they always have been: a little too young, a little too good-looking, a little too sexy for a family holiday.