Why must every character in American films who revels in sexual pleasure realize he's been leading an empty life? Jack Nicholson and Diane Keaton do their best, but can't redeem this irritatingly moralistic romantic comedy. 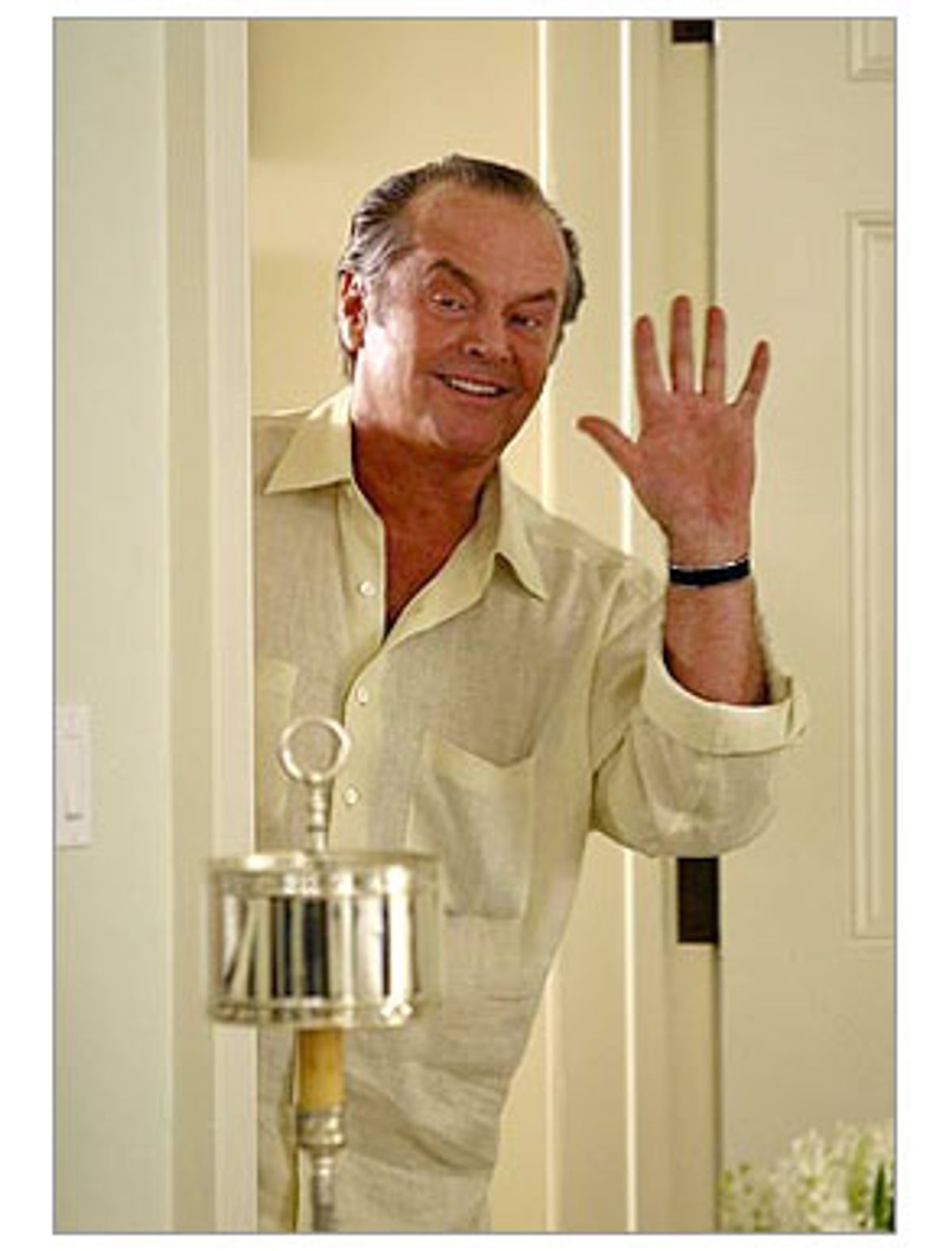 I never realized how deeply some women loathe men who date younger women until I saw the dirty looks I got when I took my 25-year-old niece out to dinner. (I used to kid her that I was going to get a T-shirt that said "She's my frickin' niece!" for our evenings out.) Forty years ago it was socially acceptable to look askance at racially mixed couples. Now it's politically correct to deride the combination of older men and younger women. As oodles of magazine articles will tell you, this new "social paradigm" has left women past 40 feeling as if they're no longer attractive, as if men no longer desire them, etc. You can't blame the women who have been dumped for younger women for feeling hurt and betrayed. But hurt feelings are a lousy foundation for criticizing the entirety of older male/younger female relationships, and there's something unattractively self-righteous about the collective pity party that has developed around the issue. The blanket disapproval of dating outside your age deserves no more respect than we accord to disapproval of dating outside your race or your religion.

This is the territory in which the new comedy "Something's Gotta Give" treads. Writer-director Nancy Meyers ("What Women Want") belongs to that school that has all but ruined American romantic comedy by turning it into the movie equivalent of one of those women's glossy articles about relationships and dating and sex. We're no longer expected to go to romantic comedies for anything so trivial as to laugh or be charmed -- we're there to improve ourselves, deal with "issues" and, hopefully, emerge with greater "empathy." Although Meyers intends it as a joke when, toward the end of "Something's Gotta Give," we see the events of the movie transfigured into a Broadway comedy, it seems perfectly fitting.

"Something's Gotta Give" is exactly the kind of "adult" dreck that you'd expect to see on Broadway. Its movie lineage is "serious" comedies like "As Good as It Gets" that are said to touch a nerve and transcend the genre. How good a comedy can you expect from people who have so little respect for the form they're working in that they set out to consciously transcend it? In a year of terrific comedies like "School of Rock" and "Bad Santa" and "A Mighty Wind" (every one of them funnier and more touching than anything in "Something's Gotta Give"), and after the sympathetic treatment of a romance between an older man and a younger woman in Sofia Coppola's exquisite "Lost in Translation," Myers offers an especially egregious example of Oscar-chasing.

The setup for "Something's Gotta Give" has Jack Nicholson as a late middle-aged impresario dating Amanda Peet, the latest in the series of young women he beds. Peet's mother is a playwright (Diane Keaton) whose success is measured by having a house in the Hamptons. Nicholson and Peet repair there for a weekend getaway only to find Keaton in residence. Keaton can barely contain her disgust at her daughter's being involved with a man Nicholson's age, but before he can make his getaway he suffers a heart seizure that necessitates that he stay put at Keaton's place while she nurses him.

It's a situation lifted right from George S. Kaufman and Moss Hart's play "The Man Who Came to Dinner" (and Meyers tries to cover her swipe by having Keaton say she feels like a character out of a Kaufman and Hart play). Anyone who's seen a romantic comedy knows that Keaton's prissiness and Nicholson's hedonism are the excuses for an opposites-attract scenario, and before long the two have fallen into bed.

Give Meyers this: She's found a sly way of presenting all the usual prejudices against May-November romancing. She isn't doctrinaire. She doesn't overtly give in to the cattiness that has of late made younger women a target for older feminists. We see Keaton acting incredibly rude to Nicholson, who takes her disdain graciously. And Meyers complicates things by having Keaton courted by Nicholson's young doctor, played by Keanu Reeves, and having to face all her unexamined convictions that a younger person cannot be attracted to an older one. It's a smart choice. You'd have to work pretty hard to find Keanu Reeves, who may be the best-looking man in contemporary movies, unattractive -- especially when his performance has the sort of casual ardor this one does.

But it's a rigged game. Keaton's character is given a sort of wisdom that Meyers seems to be saying is entirely the virtue of her sex. Her affair with Reeves is accepted, but Nicholson's character has to learn that he has just been on a quest for pleasure and correct the error of his ways. In other words, an older women who beds a younger man is embracing her sexuality; an older man who pursues younger women is just a poon hound.

The obstacles Meyers faces in her little object lesson are, oddly enough, her two leads. She manages to keep Nicholson from overacting in a role that might have been an all-out Jack-fest. Essentially, he's playing the image of himself that has been created from gossip magazines. Nicholson's small triumph is that he doesn't do it grossly. His character doesn't have the romance in his soul to be called a Casanova, but he's far from a jaded Don Juan. He doesn't lie to the women he's involved with about what he expects in a relationship, and from all appearances he treats them well. Nicholson gives a relaxed performance as a man who -- at least in the initial scenes -- knows himself, is happy with the choices he's made and has been lucky enough to live as he wishes.

But this is an American movie, and if there's one ironclad rule it's that every character who revels in sexual pleasure, even one who appears to treat his partners with tenderness and respect, must sooner or later realize that he's been living an empty life. Even Amanda Peet, attracted to Nicholson because her romantic life is similarly noncommittal, learns what she's been missing and settles down. Not only that, she gets pregnant, and Lord knows that's a sure sign of maturity. The conception of the role (if not Nicholson's performance) seems to be that it's a Jack Nicholson movie for everyone who tsk-tsked when they saw those gossip-column pictures of him with Lara Flynn Boyle.

At her best, Keaton is so good that she almost ends up validating the movie's hypocritical premise. At first she's just uptight in a way that we're meant to find funny but is simply grating. Her scenes after she goes to bed with Nicholson are amazing, in that direct way Keaton often is. The cinematographer, Michael Ballhaus, has filmed Keaton so that we can see the lines on her face, and that's to the movie's credit. She looks like a woman approaching 60 (she'll be 57 in January) and Meyers presents her as if to say, "Middle age can look damn good." On Keaton, it does. Her finest moments are the scenes right after she goes to bed with Nicholson and finds herself weeping with gratitude -- not that a man has deigned to make love to her, but because she's once again feeling a part of herself she thought was dead.

Keaton plays the exhilaration and confusion of these overwhelming emotions with the simultaneous desire to take the plunge back into romance and the fear of going too fast and scaring off her new lover, and she's superb. She puts flesh on the movie's fashionable thesis, which is more or less that the culture's preoccupation with youth makes older people (not just women) undervalue their beauty and sexuality. I'm sure some viewers will make the usual comments about Keaton -- that she's just playing Annie Hall again. But that was said in the '80s when she was turning in one stunning performance after another in pictures like "Shoot the Moon" and "Mrs. Soffel" and "The Good Mother," no two of them alike. She's doing something here unlike anything she's ever done. It's just a shame that this is the movie she's doing it in.

Given that feelings of being sexually unattractive are common to a lot of people past 40, the movie isn't honest about how feeling attractive to younger people can be a great ego boost. It's fine for women, Meyers tells us, but a sign of immaturity in men. She gives us no reason, though, to trust her idea of maturity. "Something's Gotta Give" is smooth in the manner that passes for craft in contemporary Hollywood (it has handsome production values, but not much panache or style and only a serviceable sense of structure). But it's so goddamn middle-aged.

Keaton's character is working on a play set in Paris, and the soundtrack is filled with songs by Charles Trenet and Edith Piaf, and also includes Louis Armstrong's recording of "Le Vie en Rose," all music that should appeal to anyone whose heart is still beating. But they're all presented as if they were nifty items that had just been picked up at Pottery Barn. What we see of Keaton's work is like some godawful collaboration between Neil Simon and Wendy Wasserstein -- bland, mature entertainment that pulls laughs and tears in mechanical show-biz fashion. (And at 125 minutes, this movie is a punishing length for comedy.)

If all Meyers had set out to do here was to say that our cultural standards of beauty are narrow, and that sex still can have a pull on us in middle age, who could argue? But better movies have trod this territory. "Bull Durham" didn't stint on sex or romance in a story about the inevitability of compromise. The great line given Danny Aiello in "Moonstruck" about why men chase women -- "They fear death" -- has more insight and sympathy than anything here. And Keaton herself starred in the great American movie comedy about middle age, Woody Allen's "Manhattan Murder Mystery" (overlooked, but his best movie since "Annie Hall") which dealt with people looking at their settled lives and wondering what they've settled for.

What people settle for in "Something's Gotta Give" doesn't seem such a prize. Meyers ends up telling us that older people are going to be much happier with someone their own age, and that younger people had better settle down and start making babies if they want to avoid that empty feeling. Meyers' last movie, "What Women Want," is the highest-grossing movie ever directed by a woman. "Something's Gotta Give" makes me shudder than anyone would take her word on what women want.