"Girl With a Pearl Earring"

Vermeer's famous painting comes semi-alive in this stultifyingly tasteful adaptation of a ludicrous book. Go to the museum instead. 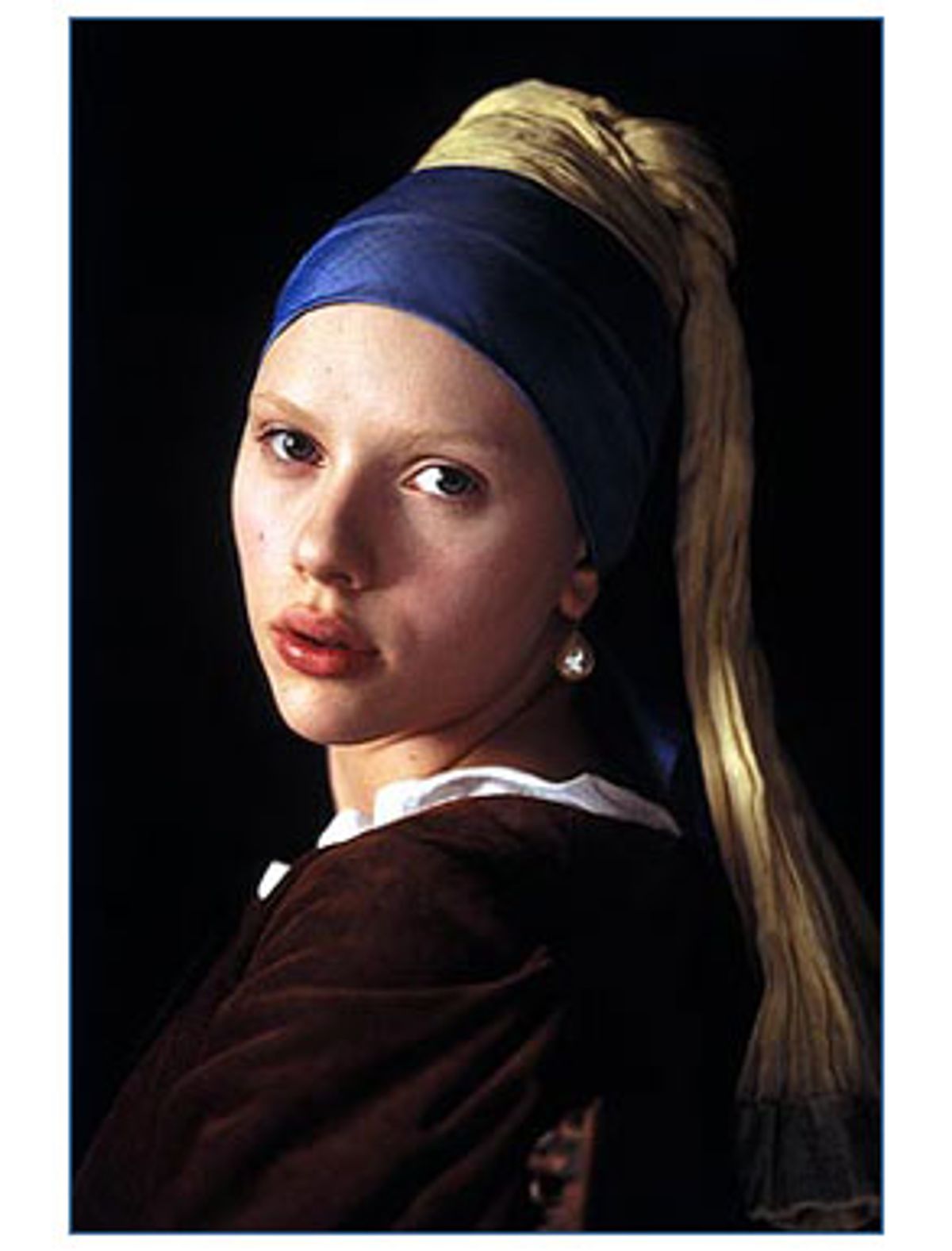 No actress can triumph over a milkmaid's bonnet. Scarlett Johansson is stuck in one of those head hankies for almost the entire length of "Girl With a Pearl Earring." She plays Griet, the 17th century Delft housemaid who becomes the subject of the legendary painting by her master, Johannes Vermeer. It's an unfortunate choice for Johansson to follow up her lovely performance in "Lost in Translation."

In a recent New Yorker piece, Anthony Lane, getting it wrong as usual, writes about the "historical kick" of the movie, telling us "the Griets of the world were not meant to be seen, and it is through the good offices of Vermeer ... that we know of such underlings now." Fine, but where does that leave poor Johansson? Bowing and lowering her eyes and tiptoeing meekly through the Vermeer household for the duration of the movie. She has been directed to deliver every line of dialogue as if she were clearing her throat in the midst of silent prayer. Johansson stays fully in character. When Vermeer instructs her to lick her lips, she does so primly, folding each lip into her mouth to moisten it. But it's not a character worth staying inside.

First-time director Peter Webber's film, based on Tracy Chevalier's ludicrous period bestseller, belongs to that strange genre that seems determined to drain the juice out of everything in the name of taste. The story of a beautiful young servant girl inspiring her artist-master and inciting tension with his wife is the stuff of period melodrama. But "Girl With a Pearl Earring" is for the crowd that wouldn't be caught dead reading a Georgette Heyer novel, or watching a movie like Bernardo Bertolucci's sumptuous Renaissance farrago of a few years back, "Stealing Beauty" (hubba hubba).

Webber is lucky to have the services of cinematographer Eduardo Serra, whose work includes Iain Softley's gorgeous film of "The Wings of the Dove." Serra's work here is beautiful as well. He reproduces the Dutch interiors that inspired Vermeer with the familiar diffuse, yet strangely precise light. And he tries to work in some grit by showing us the pig's heads and the Soutine-like sides of beef on display at the butcher's stall. This is, however, one of those movies where even the dirt and blood is picturesque. Serra is one of the masters of lighting among living cinematographers, but his choices here have an odd effect. So much of what we see has been made to look like a Vermeer canvas that the movie winds up inadvertently suggesting that Vermeer was merely replicating reality, and that shortchanges the painter's eye.

Still, it suits the Vermeer we see in this movie, played by Colin Firth in a wig that Johansson has claimed reminded her of Fabio. He spends most of the picture staring around door-frames or gazing, beady-eyed, at his canvasses. If all it took to portray an artist was to hover broodingly, Firth's performance would be aces. This Vermeer is a gent, saving Griet from the attentions of his slimy patron (Tom Wilkinson), and never letting his own ardor for her trespass into the physical realm (the movie would have been a hell of a lot better if it had), sticking to their understanding about light and color. But Firth, who can be charming, is stuck playing that undifferentiated intensity associated with artists.

By this point, it's less work to list the movies that offer believable portraits of visual artists -- Robert Altman's "Vincent and Theo"; Jacques Rivette's "La Belle Noiseuse"; Jacques Becker's great, forgotten film about Modigliani, "Montparnasse 19"; Martin Scorsese's "Life Lessons" -- than all the ones that go for the clichés. "Girl With a Pearl Earring" is as unconvincing as most of them. What distinguishes it is that it's part of what might be called the post-feminist response to the old saw "Behind every great man ..." Novelists and biographers in the past few years have been working overtime to tell us that every great male figure had an uncredited female muse/helpmate/spouse. The trend will probably continue. "Rembrandt's Whore" is already in the bookstores. Why not "Rimbaud's Bimbo" or "Mrs. Schweitzer, I Presume"?

Griet serves as Vermeer's muse here, which might be claimed as a triumph for women's influence over art if a) anyone still doubted it, and b) the other women in the film weren't so awful. As Vermeer's mother-in-law, Judy Parfitt is stuck in a black skullcap and pasty makeup that makes her look as if she's understudying Death in "The Seventh Seal." As Vermeer's wife, the Australian actress Essie Davis is playing a character who is simply unbearable. Her Catharina has no affinity for her husband's art, and though we're meant to feel some sympathy for this woman who is basically a baby machine and under the thumb of that Grim Reaper she calls a mother, Davis' cold neurosis makes it impossible.

It's always a danger to bring the standards of the present to bear on the past, and the movie makes us understand how an artist who painted a young girl was opening himself up to gossip. But the movie is so dead that you can't imagine that anyone in it has the energy for adultery, and so Catharina's wild fits of jealousy make her seem like the 17th century equivalent of those women who think their boyfriends are cheating if they look at a girlie mag.

Given the movie's paralysis, Tom Wilkinson's overacting is some kind of achievement. Remember when you made a face as a kid and your mother warned you your features would freeze in that expression? Somebody needs to tell Wilkinson that about his permanently cocked eyebrow. He can be a very good, unshowy actor (as in "In the Bedroom"), but almost every time he plays a villain he leers and skulks and hisses. And though he strokes his Van Dyke beard constantly, it has to be measured as some restraint that he resists twirling his mustache. Wilkinson is the baddie because he sees Griet as simply a vessel for his lust, no more real than the image she inspires. But the entire movie doesn't see her as much more than an image. What's the point of setting up a historical fantasia around an invented character if you're only going to make her part of the scenery?