Just months after Zeferino Colunga Sr. lost his GI son in Iraq, the government arrested him and sent him back to Mexico. 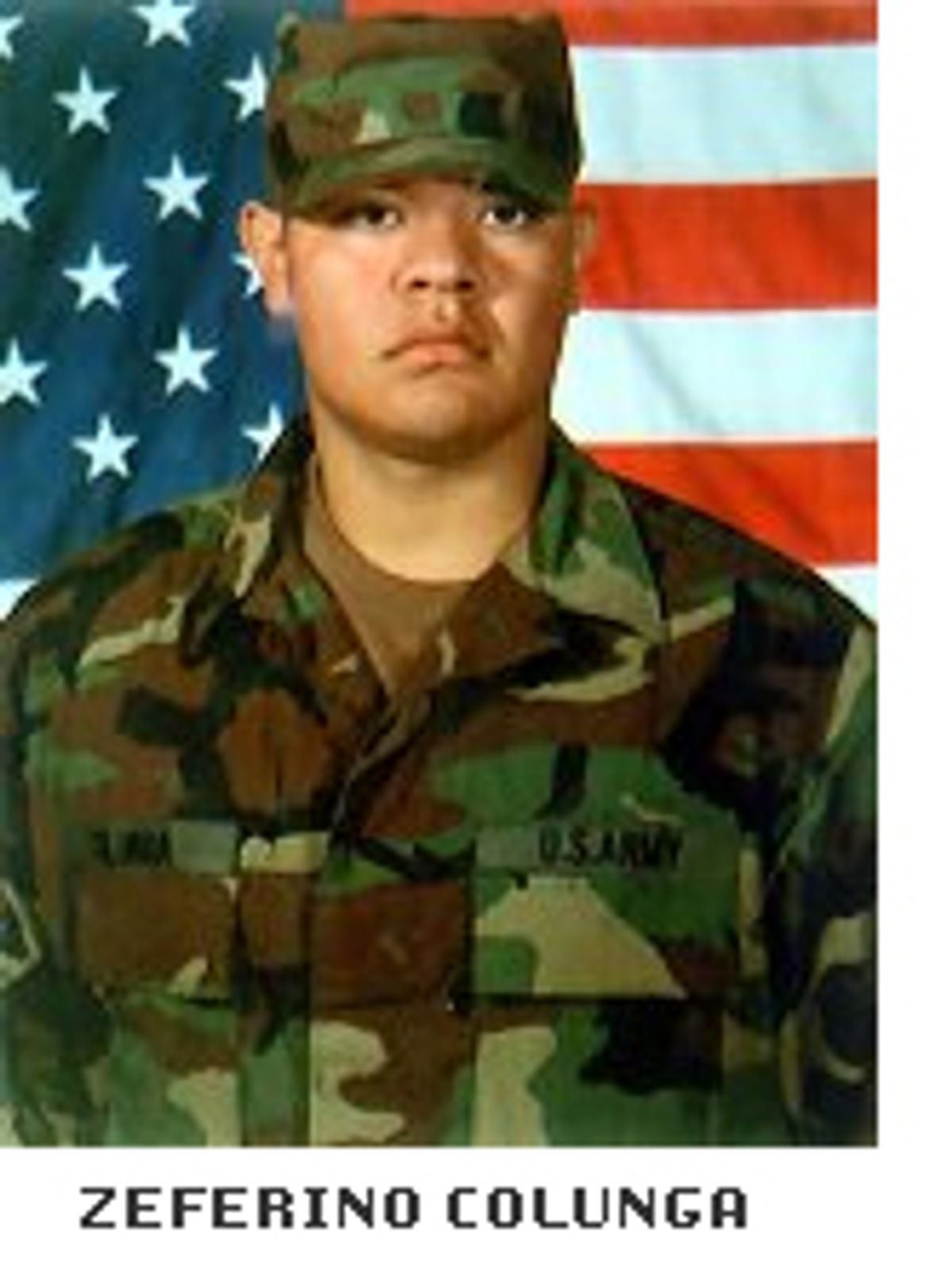 U.S. Army soldier Zeferino Colunga Jr. died four months ago from a mysterious illness he contracted while serving in Iraq and was buried with full honors in a Texas cemetery. Last week, with the family still in mourning, the soldier's father was deported to Mexico as an illegal immigrant. Now family members wonder if the deportation of Zeferino Colunga Sr. was connected to their public demand for an independent investigation into the young soldier's death.

The son's passing, and now the father's deportation, have shocked and saddened many in the small Texas community of Bellville, 60 miles west of Houston, where the Colungas have lived for nearly 20 years. But the U.S. Department of Homeland Security insists the death and the deportation were completely unrelated. And a review of the facts suggests the family may simply be suffering from a cruel twist of fate. But even the Austin County, Texas, sheriff who handled the case doesn't think it's fair that the still-grieving father was deported so soon after his son was buried.

"Sometimes I see things that I don't totally agree with even though I'm a lawman doing my job, and this is one of those times," says Sheriff DeWayne Burger. "Maybe my patriotism gets the best of me, but the man gave up his only son to serve the United States, and now we're deporting him?"

Colunga's strange death made headlines this summer, coming amid a rash of mysterious pneumonia-type illnesses that struck more than 100 soldiers serving in Iraq as well as Southwest Asia. Some have suggested the cases are tied to the military's controversial anthrax vaccine program.

Colunga, a 20-year-old who held the rank of specialist, died on Aug. 6 in Germany after being airlifted out of Iraq. For a month he had been complaining of chest pains. Army doctors diagnosed him with having acute leukemia. He contracted pneumonia soon after his airlift and died as his temperature reached 105, says his sister, Teresa. He was buried stateside in late August.

Three months later, the elder Colunga, a mechanic and truck driver, was picked up on an outstanding warrant for having entered the country illegally in 1999. He was deported Dec. 5. He had been deported once before, in 1993, after pleading guilty to an aggravated felony charge of marijuana possession in 1987. "He was removed in '93 as an aggravated felon. After he was deported he came back, but he can't reenter the United States if he's an aggravated felon," says Louisa Aquino, spokeswoman for the Houston office of the Department of Homeland Security, which now oversees deportations.

"Tragic as his son's death may be, it's irrelevant to this case," Aquino says. "Based on the laws on the books, we don't have any recourse but to remove illegal reentries. This case does not qualify for any hardship."

The bureaucratic efficiency leaves 19-year-old Teresa Colunga stunned. "I lost my brother in the war, and now I'm losing my father," she says. "The government doesn't even care that his son just died serving his country. I asked the Army to help us and they told me there was nothing they could do."

Texas politicians all sent sympathy cards when her brother died, she says. But, she adds, when she contacted their offices for help on the deportation case, "they shut their doors on me."

A spokeswoman for Rep. John Carter, a Texas Republican whose district includes Bellville, says the congressman's office is looking into the case. But she stressed that their options for helping a client are limited when the courts are involved. "The administration or the INS would have to take it up," the spokeswoman said.

The Pentagon is currently investigating the pneumonia outbreak, which, it says, has claimed two lives. It does not count Colunga's among them, however, since Army doctors say he actually died of leukemia. The family is still waiting for a copy of the final autopsy.

All of the sick soldiers took the mandatory anthrax vaccination shots. Earlier this year, Rachael Lacy, an Army reservist, died of pneumonia-like symptoms five weeks after receiving her shots. For months the Pentagon denied the vaccination had anything to do with her death, but then, in November, conceded that it might have.

On Aug. 12, the Colunga family, along with another whose soldier son died of the same pneumonia, wrote to Secretary of Defense Donald Rumsfeld seeking an independent investigation into the deaths. "We as a family are concerned that we are not being told the truth," the families wrote. "It is our right to receive truthful, honest and unfiltered answers just as the military required truth, honesty and commitment from our son."

"The family definitely thinks the deportation is payback, to try to keep us quiet," says Teresa. "If they want to report illegals, they should report half the town of Bellville. Why single my dad out, why now?"

According to Sheriff Burger, Colunga was riding as a passenger in a car that got pulled over for a traffic ticket in late November. When the deputy ran a check on the two people in the car, Colunga's outstanding warrant came up. He was arrested, the INS was notified, and a week later Colunga was deported. "It was a routine traffic stop," Burger says.

In the small town of Bellville, where Spc. Colunga's funeral drew a 200-car procession, it's likely the arresting patrolman knew about the father's loss. "I'm sure the officer did not take any pleasure putting the man in jail," the sheriff said. "But he was just doing his job."

Six months ago, Teresa Colunga, her brother and their parents made a family of four. Now both men are gone. "He gave this country his son, and they won't let him be buried next to him," Teresa said. "After my brother's death, we bought plots on either side of his tombstone for mom and my dad. Now we can't have that."