Eleanor Vast-Binder talks about taking it off in order to turn voters on -- against the president. 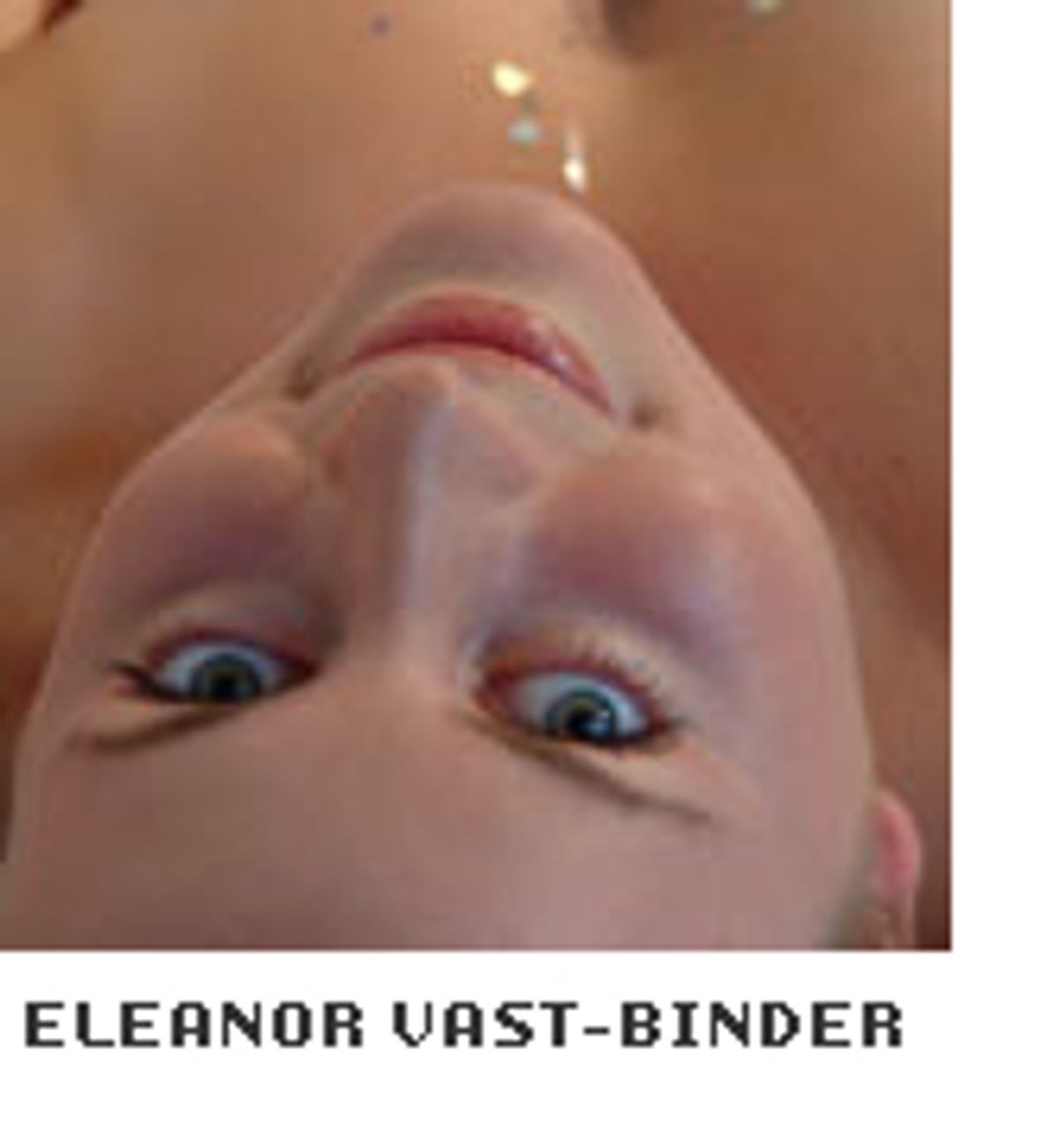 "In America, if you're rich you can fight," says 25-year-old Eleanor Vast-Binder of Detroit, who describes herself as a construction worker between jobs. "If you're not rich, what can you do? You don't really have a voice in this country."

Vast-Binder found her voice by joining Babes Against Bush, which aims to "put the pleasure back into liberal politics." Her personal contribution was to strip down and pose as Ms. January 2004 -- naked but for a carefully arranged scarf -- for the group's calendar, which features women in various states of undress. One smokes a cigar, wears a beret and holds a "Bring Back Bill" sign, another proudly displays an eviction notice for George W. Bush.

The calendar certainly gave Vast-Binder and the other Babes a voice -- and an appearance on Fox News' "Hannity and Colmes," anyway, and enough resulting hate mail that the group's site had to stop the flood of incoming messages and post an open letter in which the group's spokesman, David Livingstone, taunts the critics.

"Is it because a group consisting primarily of women is having the audacity to express views that aren't in lockstep synch with your hordes of button-down establishment pundits?" the letter asks. "Is it because common people -- those ordinarily without access to the power of the broadcast media -- have managed to make their voices heard above the din of the propagandistic garbage your media empires peddle as news?"

Or is it because a bunch of scantily clad women have adopted the motto "Because Hot Chicks Hate Him Too!" and taken to the page and the airwaves -- leading with their racks?

"This is not a sex issue," says Vast-Binder, a graduate of Detroit's Center for Creative Studies. "It so happens that women can convert their sexuality into power to get their point across. I am thankful we could use our feminine power in a way that encourages people to get out there and vote." Against George Bush, that is.

Vast-Binder became involved with organizing the calendar project in the winter and spring, when she was part of Detroit's antiwar protests. "We'd sit around talking about what we could do personally to spread the word that people need to start voting," she says by phone from her Detroit home. "And we came up with this idea for the calendar, which seemed to be an accessible idea for most people in America."

Most of the planners had never posed before, and the group did hire some professional pinups. But, insists Vast-Binder, the babes represent "a large variety of women who are political, and who are models as well."

"But I don't want to make it sound like this is a Democratic Party organization," says Vast-Binder, who voted for Ralph Nader in the last election. "We have a Republican model in the calendar," she says, before pausing. "But she doesn't want to identify herself publicly."

Vast-Binder then launched into a litany of beefs with the current administration. "My identical twin sister was just diagnosed with M.S.," she says. "The medical bills for this kind of thing are just astronomical. Of course I was worried, what if I have it, too? And I don't have any health insurance. Thankfully, she does. But so many people in this country don't have jobs, or have jobs but don't have insurance. It's a disgrace that has not been handled at all by this administration."

She's also upset about Iraq ("I don't believe that this war in Iraq is a just war") and the environment (The Healthy Forests Restoration Act "sounds all good but really masks a bill that is a detriment to the environment"), but steers clear of commenting on Bush's policies in Israel ("Oh, gosh that is another can of worms I'd rather not discuss"). She's not sure who she'll vote for in the upcoming elections, though both John Kerry and Howard Dean have caught her eye.

Did her family have any qualms about Vast-Binder exposing her politics? "They are so supportive," she says. "I grew up in a very political household." Her parents, in fact, were the first ones to buy a calendar from her.