Memo to U.S. press corps: Your coverage of "President Gives American Troops the Bird" was adequately fawning and obsequious. But failure to continue to grovel will be severely punished. 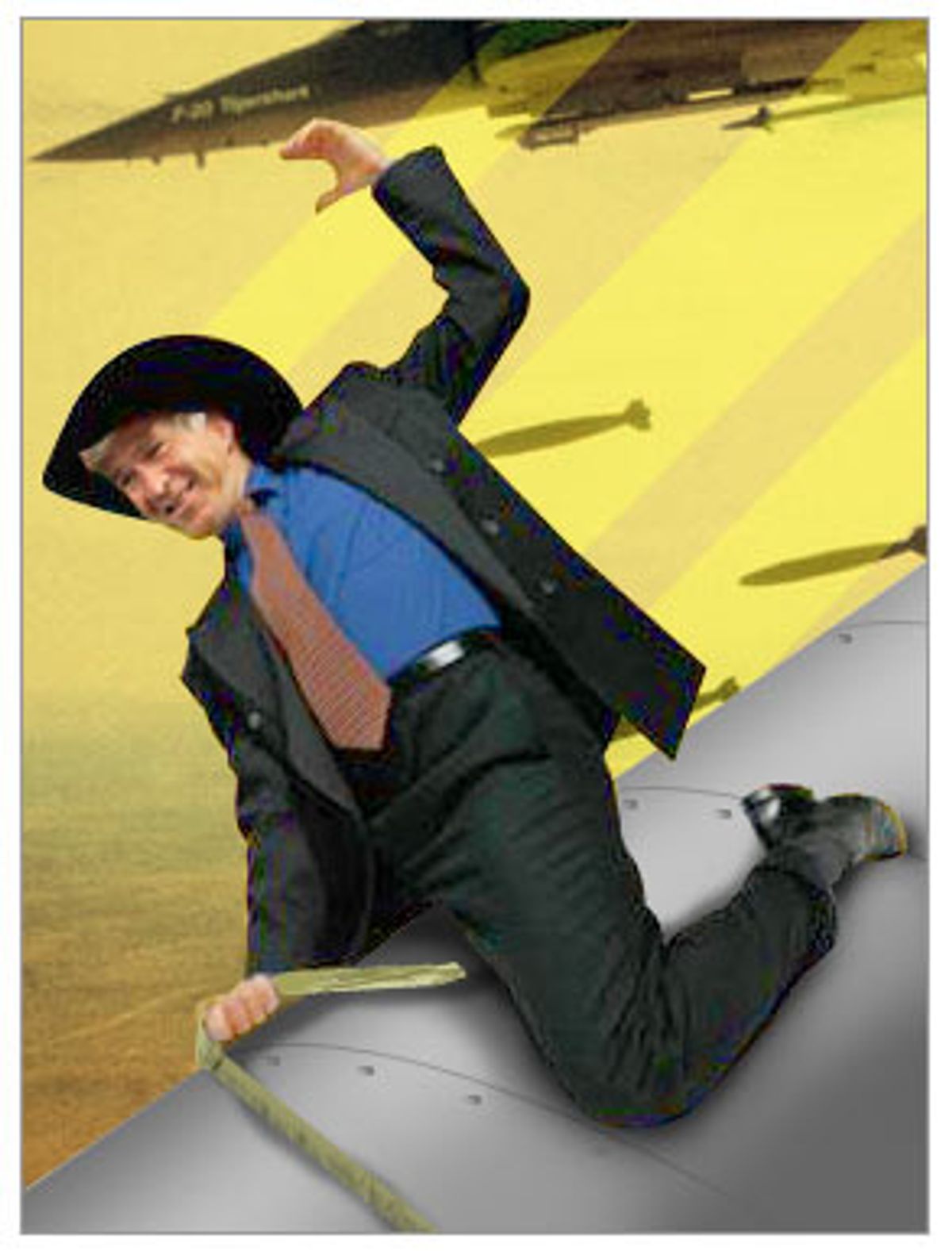 FOR IMMEDIATE RELEASE: All Press Contacts

(NOTE: This information is classified. Any credentialed press who leak this document to press or disobey any of our commands will be placed outside the BushCo™ Media Vortex and left to die shunned, bereft, and bitterly, bitterly alone.)

Hey! Thanks for "playing along" (and pretending you had a choice) with our Thanksgiving Day "President Gives American Troops the Bird"™ photo op. Thank goodness you "reporters" didn't actually "report" what was going on till we told ya to!

(NOTE: Prop turkey still missing. Please return, or $3,487 charge from Kellogg, Brown and Root will be transferred to press pool.)

And you weren't even offended (or at least didn't show it) when our beloved President, George "Fightin' Jeezus" Bush, called you "my bitches." Good goin'!

Ready? OK! Here are the next two big ones on Unka Karl's Agenda.

"Operation Chimney Drop"™: POTUS will depart Dec. 24 at 0200 hours, from yet-to-be-disclosed location to be "dropped down chimney" (lowered by Blackhawk Chopper One?) into a "Green Zone" 'Halliburton Party Palace' in Baghdad. POTUS, dressed in "Khaki Santa" muscle suit will distribute ACTUAL BODY ARMOR to yet-to-be-selected eager, young, dewy-eyed soldiers (FROM RED STATES ONLY) who will whimper gratefully and stare at POTUS with unabashed admiration.

(NOTE: Cameras are NOT, repeat, NOT to roll when Body Armor is confiscated.)

POTUS will then have 30-second LIVE SHOT (FOX ONLY) giving GWB Talking Action Figure to deserving (orphaned? Might be pushing it ...) Iraqi child. After EXACTLY 20 minutes, POTUS will be evacuated, waving in jolly fashion, saying, "God Bless You, Peckerwoods, Ever' One!"

HOLD THESE ON YOUR CALENDARS...

VALENTINE'S DAY 2004: POTUS will depart Feb. 14 at 1300 hours from yet-to-be-disclosed location and arrive in NORTH LAS VEGAS approx. 1615 hours. Secure motorcade will drop POTUS outside WAREHOUSE created by Bruckheimer, etc., to look like Vegas Wedding Chapel. CAMERAS WILL BE ESCORTED INSIDE exactly three (3) minutes before event. At exactly 1638 hours, POTUS, dressed in full SWAT attire, will burst into "Chapel" and "take down" two (noticeably effeminate) gay males, both wearing HOWARD DEAN BUTTONS. Gay males, minister, and witnesses will be arrested, cuffed, and frog-marched to local jail. POTUS will then RELEASE PRE-SELECTED PARTY DONORS/BAPTIST CHURCHGOERS who had (allegedly) been kidnapped, tortured and held captive by femme Deaniac gay couple for no apparent reason. POTUS will then "button" visit with "dinner" (POTUS will not eat dinner) at local "HICKORY PIT" Bar-B-Que Restaurant. POTUS will be framed at center of table, to suggest "Last Supper." Button shot op will last 10 seconds.

CREDENTIALS for these two events will be issued PENDING FULL REVIEW of Turkey Day Event, to ensure that coverage was properly reverential.

JULY 4, 2004: POTUS in New York, will single-handedly save STATUE OF LIBERTY from being blown up by embittered "Hate America First" lefty-liberal Democrats (yet to be cast -- think Marilyn Manson) who are in midst of planting "evidence," planning to blame debacle on Republicans. PRESS CONFERENCE will be held in "torch" of Statue, in which EVIDENCE will be produced linking Howard Dean campaign to group. President will show statesmanship by refusing to comment, then promise impartial investigation by John Ashcroft.

Thanks again! Please believe me when I tell you that there's NO WAY we could have "sold" this war (or these tax cuts, or any part of the BushCo™ Program) without your full, total, abject, servile, groveling compliance. And yet we still hate you! Isn't that strange?

Rich Procter is a writer in Los Angeles.