The former dictator "will face the justice he denied to millions," Bush declares, as Baghdad celebrates. 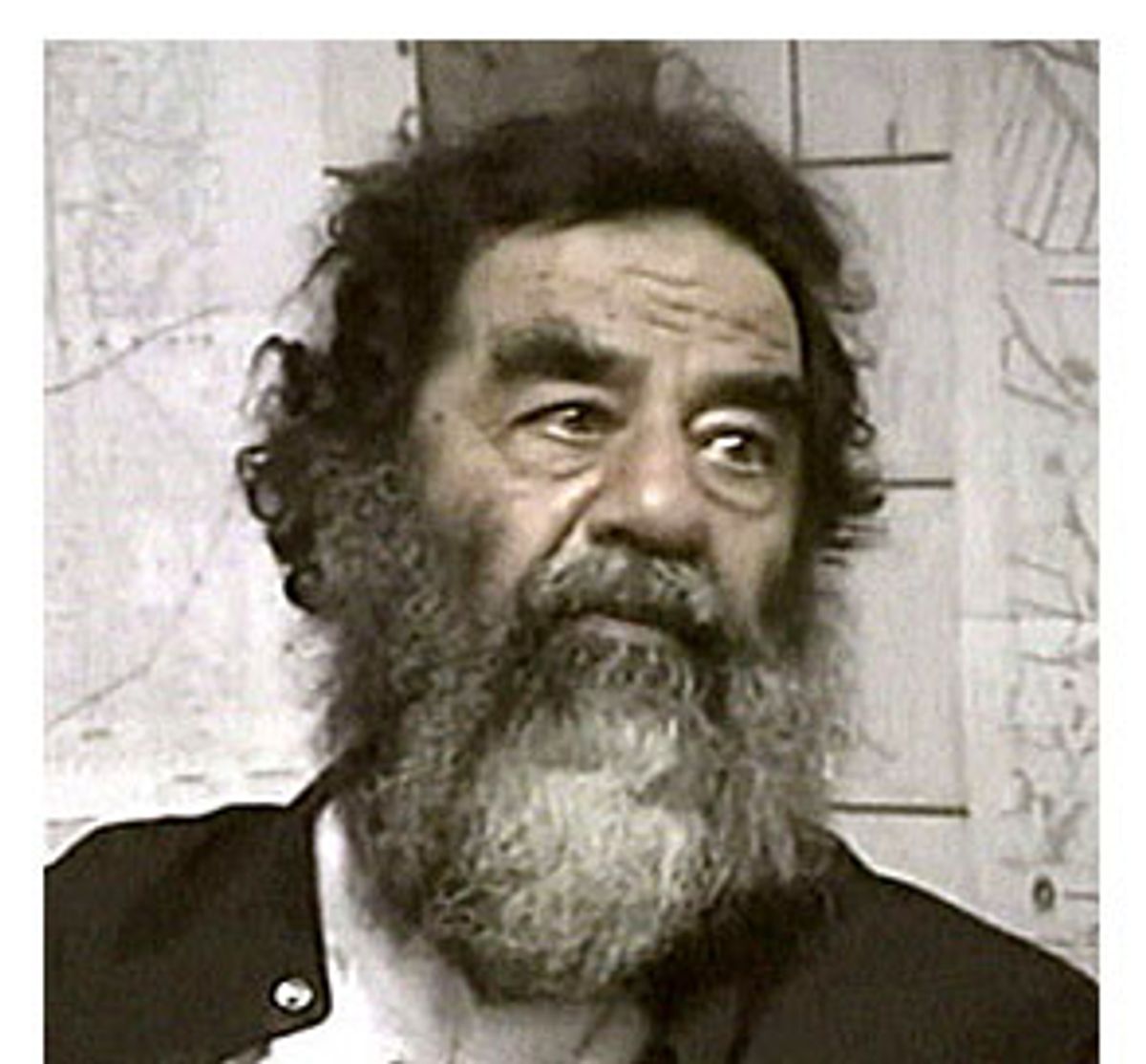 Without firing a shot, American forces captured a bearded and haggard-looking Saddam Hussein in an underground hide-out on a farm near his hometown of Tikrit, ending one of the most intensive manhunts in history. The arrest was a huge victory for U.S. forces battling an insurgency by the ousted dictator's followers.

In the capital, radio stations played celebratory music, residents fired small arms in the air in celebration and passengers on buses and trucks shouted, "They got Saddam! They got Saddam!" After sundown, large explosions were heard in central Baghdad, and flames and thick smoke were seen; bursts of gunfire rang out from the area of the blasts.

"The former dictator of Iraq will face the justice he denied to millions," President Bush said in a midday televised address from the White House, eight months after American troops swept into Baghdad and toppled Saddam's regime. "In the history of Iraq, a dark and painful era is over. A hopeful day has arrived."

Washington hopes Saddam's capture will help break the organized Iraq resistance that has killed more than 190 American soldiers since Bush declared major combat over on May 1 and has set back efforts at reconstruction.

But Maj. Gen. Ray Odierno, commander of the 4th Infantry Division, which captured Saddam, said the ousted leader did not appear to be directly organizing resistance -- noting no communication devices were found in his hiding place. "I believe he was there more for moral support," Odierno said.

Saddam's capture was based on information from a member of a family "close to him," Odierno told reporters in Tikrit. "Finally we got the ultimate information from one of these individuals," he said.

The capture took place at 8:30 p.m. Saturday at one of dozens of safehouses Saddam is thought to have: a walled compound on a farm in Adwar, a town 10 miles from Tikrit, not far from one of Saddam's former palaces, Odierno said.

"I think it's rather ironic that he was in a hole in the ground across the river from these great palaces that he built," Odierno told reporters in Tikrit.

The event comes almost five months after his sons, Qusai and Odai, were killed July 22 in a four-hour gunbattle with U.S. troops in a hideout in the northern city of Mosul. There was hope at the time that the sons' deaths would dampen the Iraqi resistance to the U.S. occupation. But since then, the guerrilla campaign has mounted dramatically.

In the latest attack, a suspected suicide bomber detonated explosives in a car outside a police station Sunday morning west of Baghdad, killing at least 17 people and wounding 33 more, the U.S. military said. Also Sunday, a U.S. soldier died while trying to disarm a roadside bomb south of the capital -- the 452nd soldier to die in Iraq.

Saddam was one of the most-wanted fugitives in the world, along with Osama bin Laden, the leader of the al-Qaida terrorist network who has not been caught despite a manhunt since November 2001, when the Taliban regime was overthrown in Afghanistan.

"Ladies and gentlemen, we got him," U.S. administrator L. Paul Bremer told a news conference. "The tyrant is a prisoner."

Some 600 troops and special forces were involved in the raid that netted Saddam -- though not all were aware beforehand that the objective was "High Value Target No. 1," Odierno said.

Troops found the ousted leader, armed with a pistol, hiding in an underground crawl space at the walled compound, Odierno said. The entrance to the hiding place, covered with rugs and dirt, was a few feet from small, mud-brick hut where Saddam had been staying.

The hut consisted of two rooms, a bedroom with clothes scattered about and a "rudimentary kitchen," Odierno said. The commander said Saddam likely had been there only a short time, noting that new shirts, still unwrapped, were found in the bedroom.

Saddam was "very disoriented" as soldiers brought him out of the hole, Odierno said. A Pentagon diagram showed the hiding place as a 6-foot-deep vertical tunnel, with a shorter tunnel branching out horizontally from one side. A pipe to the concrete surface at ground level provided air.

Saddam didn't fire his weapon. "There was no way he could fight back so he was just caught like a rat," Odierno said.

Two other Iraqis -- described as low-level regime figures -- were arrested in the raid, and soldiers found two Kalashnikov rifles, a pistol, a taxi and $750,000 in $100 bills.

A U.S. defense official, who spoke on condition of anonymity, said Saddam admitted his identity when captured.

Lt. Gen. Ricardo Sanchez, the top U.S. military commander in Iraq, who saw Saddam overnight, said the deposed leader "has been cooperative and is talkative." He described Saddam as "a tired man, a man resigned to his fate."

"He was unrepentant and defiant," said Adel Abdel-Mahdi, a senior official of a Shiite Muslim political party who, along with other Iraqi leaders, visited Saddam in captivity.

The official added: "He didn't seem apologetic. He seemed defiant, trying to find excuses for the crimes in the same way he did in the past."

The White House said Saddam's capture assures the Iraqi people that the deposed leader is gone from power for good.

"The Iraqi people can finally be assured that Saddam Hussein will not be coming back -- they can see it for themselves," White House press secretary Scott McClellan said.

Eager to prove to Iraqis that Saddam was in custody, Sanchez played a video at the news conference showing the 66-year-old Saddam in custody.

Saddam, with a thick, graying beard and bushy, disheveled hair, was seen as doctor examined him, feeling his scalp and holding his mouth open with a tongue depressor, apparently to get a DNA sample. Saddam blinked and touched his beard during the exam. Then the video showed a picture of Saddam after he was shaved, juxtaposed for comparison with an old photo of the Iraqi leader while in power.

Iraqi journalists at the press conference stood, pointed and shouted "Death to Saddam!" and "Down with Saddam!"

Saddam was being held at an undisclosed location, and U.S. authorities have not yet determined whether to hand him over to the Iraqis for trial or what his status would be. Iraqi officials want him to stand trial before a war crimes tribunal created last week.

Amnesty International said Sunday that Saddam should be given POW status and allowed visits by the international Red Cross.

Ahmad Chalabi, a member of Iraq's Governing Council, said Saddam will be put on trial.

"Saddam will stand a public trial so that the Iraqi people will know his crimes," Chalabi told Al-Iraqiya, a Pentagon-funded TV station.

British Prime Minister Tony Blair hailed the capture, saying the deposed leader "has gone from power, he won't be coming back."

"Where his rule meant terror and division and brutality, let his capture bring about unity, reconciliation and peace between all the people of Iraq," Blair said.

Celebratory gunfire erupted in the capital, and shop owners closed their doors, fearful that the shooting would make the streets unsafe.

"I'm very happy for the Iraqi people. Life is going to be safer now," said 35-year-old Yehya Hassan, a resident of Baghdad. "Now we can start a new beginning."

Earlier in the day, rumors of the capture sent people streaming into the streets of Kirkuk, a northern Iraqi city, firing guns in the air in celebration.

"We are celebrating like it's a wedding," said Kirkuk resident Mustapha Sheriff. "We are finally rid of that criminal."

Still, many Baghdadis were skeptical.

"I heard the news, but I'll believe it when I see it," said Mohaned al-Hasaji, 33. "They need to show us that they really have him."

After invading Iraq on March 20 and setting up their headquarters in Saddam's sprawling Republican Palace compound in Baghdad, U.S. troops launched a massive manhunt for the fugitive leader, placing a $25 million bounty on his head and sending thousands of soldiers to search for him.

Saddam proved elusive during the war, when at least two dramatic military strikes came up empty in their efforts to assassinate him. Since then, he has appeared in both video and audio tapes. U.S. officials named him No. 1 on their list of 55 most-wanted Iraqis, the Ace of Spades in a special deck of most-wanted cards.

Saddam's capture leaves 13 figures still at large from the list. The highest ranking figure among them is Izzat Ibrahim al-Douri, a close Saddam aide who U.S. officials have said may be directly organizing resistance.