What you want to know is how it feels to make love to someone when both of our wedding rings are off. 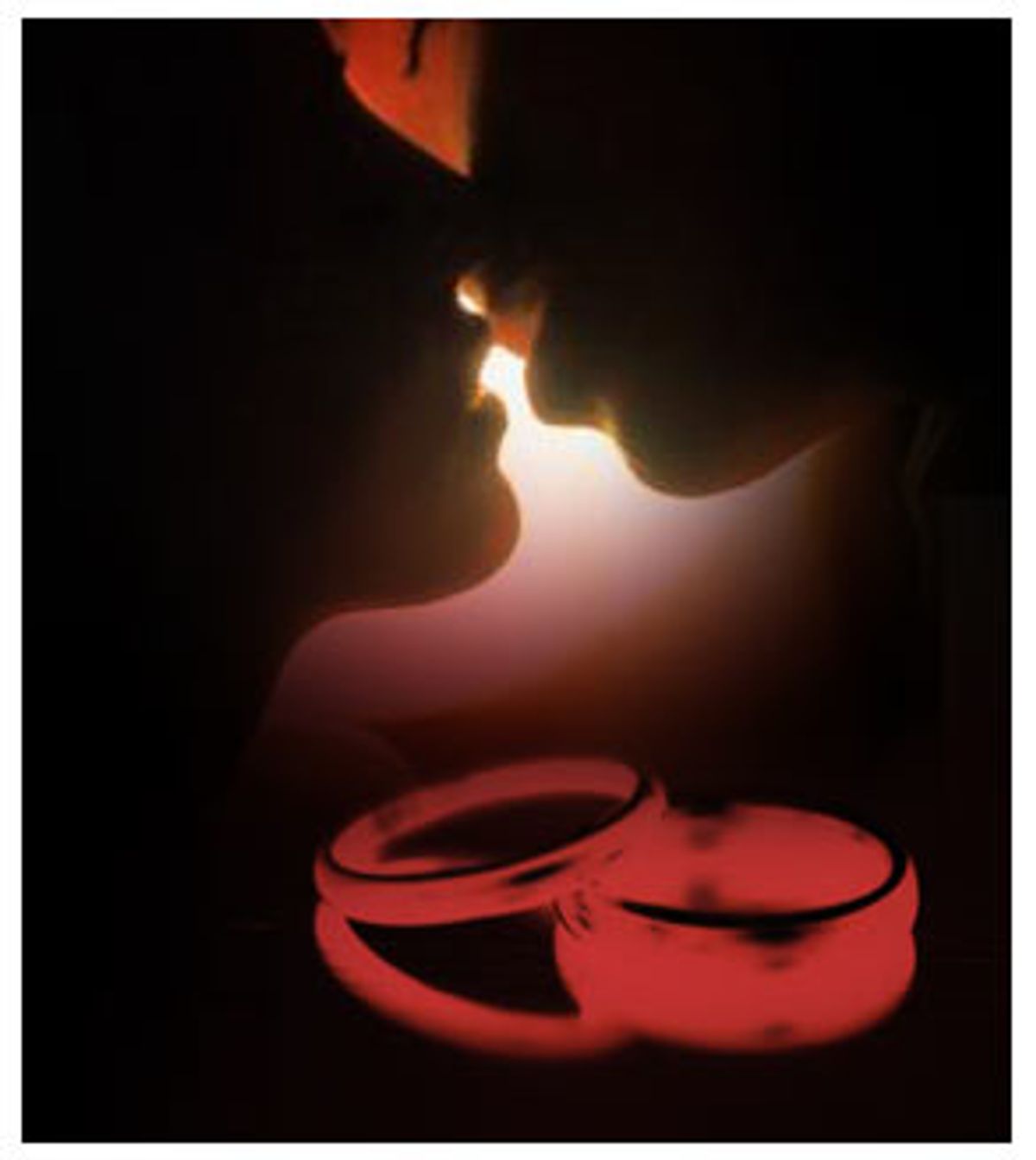 You want to hear what it is like to walk through the doors of the Hyatt Hotel, hand in hand with a man who has just slipped off his wedding ring. You want to know what it feels like to sit in a parked car in the hills of San Francisco, the city outside thick with night, my stomach and chest loopy like a kid on a ferris wheel, as I talk to my ex-lover. You want to know what it is like to whisper to a man I haven't seen in 10 years, to wonder aloud where we could meet one morning while my child is in preschool. You want to know how my body feels, how it opens up just talking to him, just wondering aloud with this man about where we could have sex. Because that is what we were talking about. We were not talking about wanting to meet for lunch someplace with crisp, white linen napkins. We were not talking about taking a stroll in Golden Gate Park, stopping for ice cream and tossing bread to the geese. We were not talking about an afternoon matinee and then, well, maybe if we still sparked, maybe a kiss. What you want to know is what it was like to stand in the reservation line at the Hyatt, hips nearly touching this man whom I hadn't laid eyes on in over a decade, what it was like to stand so close to him and realize that his scent was the same.

And I want to tell you.

Like a new mother, like an eighth grader after her first kiss, like an athlete who took the gold, I want to tell you everything. I want you to know how he looked that last day I saw him in March of 1993. How his dark hair hung down, just a little in his eyes. Those eyes like warlock eyes. I want you to understand how long and lean his legs are. How his thighs, just seeing or thinking about those thighs, makes me want to lie down naked and silent and open. You want to know about his hands. About his long fingers and how his hands are always warm and soft like grandma's strudel dough. I want to tell you how he arrived at my door that day, the day we finally ended our relationship, scuffed motorcycle helmet in hand, long thighs, long fingers, and the way he smells like sex. The way he always smells like sex. Musty, yes. Smoldering, yes. Like eucalyptus bark and rain-filled clouds and Tuscan tomatoes and red picante peppers and expensive worn leather shoes and that hint, just a hint of burgundy.

I want to tell you about that last time I saw him a decade ago. I want to talk about the last day, the day I assumed could be the last time I ever saw him. That day I couldn't hold the drama any longer. But I can't. I can't because as I am telling you about seeing him at the door that day, all I can think about is what happened after we stood in the reservation line at the Hyatt 10 years later, after we both had been married, changed jobs, had children, grown slightly gray, and asked for a day room.

Asking for a day room is like giggling while you buy the condoms, like showing up at the party an hour late with hickeys all over your neck, like feigning that you're tired when you leave your friends at 10 p.m., everyone knowing. Everyone knowing that what you really want, all that you're thinking about, all that matters is naked flesh and blood pulsing and torrents of jungle rain pounding into you. Asking for a day room, no suitcase in hand, is like gloating, like bragging, like saying, "Sorry you're stuck behind this big oak counter in the airless lobby. We're going upstairs now. We'll be three floors above you, undressing and licking and teasing and whispering and screaming in a tangle of sex." That's what a day room is like.

I want you to know what it is like to have the elevator doors shut. To be alone with a man I haven't seen for a decade. To have the doors shut and before I could think, before I could imagine anything else, he was there, pressed against me, me pressed against the back of the elevator, his mouth all over me, his hands all over me, almost inside of me, god, he was there, right there, musty and burgundy and ready. We were ready. That's what you want to know. Because you're thinking, It's been 10 years. How awkward. How they must have aged. How they must be noticing the wrinkles around the eyes and the shifts in each other's body. They're thinking of their spouses. They must be feeling guilt and shame and uncertainty. Certainly this meeting after so long must be fraught with discomfort, to say the least. But what I want to tell you, what you need to know is that I was not thinking of wrinkles or wedding rings. No, what I was thinking was nothing. There was no thinking there in the elevator, headed higher, the ride too short. You know what I'm talking about. You know what it is like to be just flesh and bones, to have no thoughts, to be a wild white tiger. You know what it is like to run from the cave, after being in the dark and alone for days. You know what it is like to wake up after sleeping too long and to be so hungry you can barely think.

You think I will tell you how sex in a hotel room at 10 in the morning led to a dark slide down to hell. You think there will be a price to pay. But don't count on me being the one to tell you about guilt and shame and remorse. There's nothing to tell. You know the thrill of that key lime pie after dinner, after you swore you would stick to your diet, after you insisted you would just have salad. You know what it feels like to think about a stranger's body in you as you lie in bed, your husband's sweaty thighs pressing, his nudging knees pushing you to open. You know what it is like to have that third martini, your skirt hitched a bit too high, your high heels slipped off, a jagged run in your nylons along the back of your calf. You know how it feels when you see a picture of yourself as a younger woman, eyes bright with anticipation and cheeks flush with life.

No, I can't tell you about remorse; I will not regret being brought back from the dead. What I want to tell you is the way his hands felt on my back as he lightly kissed my neck when we closed the door to the room. Like I was lying in the grass and the air was cool, the first day of fall. I want to tell you that I had forgotten how warm his lips always are. That I had forgotten the way his voice, melted dark chocolate, purrs in my ears; purrs and demands. How his body doesn't ask, doesn't wonder, doesn't hesitate. How he insists. And how I yield. I want to tell you about the way he slowly unzipped my dress. The way he slipped it off. And the way he left me wanting as he got up from the bed to hang my dress carefully on the chair. He carefully hung my dress on the chair and when he returned, when he climbed into bed and pressed into me, spooning, the way I laughed at his old-fashioned chivalry. The way I laughed and teased that he didn't throw it recklessly to the ground.

But you see, we are not two strangers. We used to go to the movies together. We cooked pasta together and washed the dishes afterward. We were once people who woke up together in the morning. He would help me on with my coat. I would brush the lint off his back. We were once more than just these two bodies, fitting like Legos together. There is the sex, yes the wonderful sex, but there are also those remnants of sweetness and care.

But you do not want to know about the sweetness. You do not want to know about the dress on the chair, now that the dress is no longer the lure, the tease of black lace bra, the possibility. You want to know how I quickly pulled on the black lace bra and panties that morning. How I rushed to cover them before my son could see. How I slipped into my low-cut summer dress, the one that makes me feel like I'm walking along the Seine. How I slipped it on and just then my son walked into the room. How he looked at me and said, "You look so pretty, Mommy."

You want to know how I dropped my 3-year-old son off at preschool at 9 a.m. on the dot. How I wore flat sandals, my heels in the trunk of the car. How I had a black shirt over my dress, over my low-cut dress with the black lace of my bra purposely showing, purposely teasing. How I wore a black shirt to cover the cleavage and lace, but I couldn't stop the teasing, couldn't stopped being teased as I felt the lace, as I felt the surprise of a sexy bra hidden on the way to preschool. You want to know how my son's teacher said, "You look great. You look so beautiful." And I said, "Thanks, I've got a meeting on the Peninsula. I have my cellphone, call if you need me." And how I drove two blocks away, stopped the car and slipped on my heels, slipped off the shirt, reapplied my lipstick, turned up the music and drove away really fast.

You want to know how I called him on the way. How I said, "Let's skip coffee, just meet me at the hotel." And the way he laughed. The way he laughed and said, "You got it. I'm on my way." You want to know how I pulled into the parking lot of the Hyatt Hotel at 9:30 a.m., music loud and lipstick red. Thighs tingling. How I looked in my rearview mirror and saw a black car park behind me and how before I even saw him, I knew it was him. I could feel him already.

You want to know how I got out of the car and it felt like movie-picture slow motion, like it was an hour before we opened our arms to each other and without a word, without hesitation, like he was just back from the Army, from being stationed far away, from fighting a war I couldn't imagine, like that we kissed. I want to tell you that if you asked me in that moment what year it was and if I was someone's mother, I could not have said. Kissing him, that kiss, being kissed, being that kiss, was stepping through a secret portal -- lightly pressing on that one part of the bookshelf and the whole thing spins to reveal a hidden room full of platinum statues with emerald eyes. And when I step into that room, it is the unraveling of all that's been held tight. It is the unleashing of possibility and promise.

Sabina Balou is a writer in California.