A chance to make up for Guantanamo and the PATRIOT Act 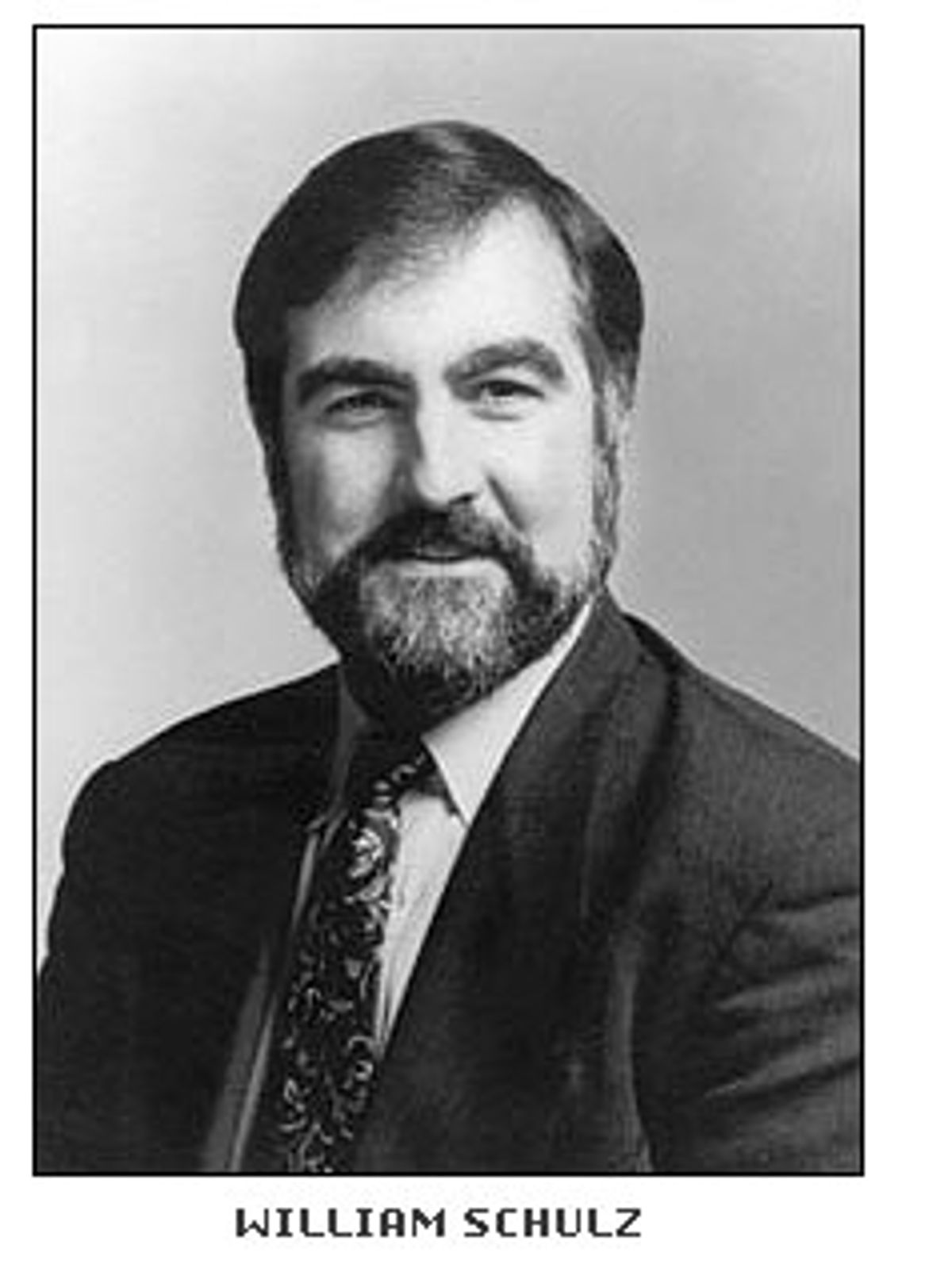 For more than two decades, Amnesty International closely documented the thousands of horrifying human rights crimes visited on the Iraqi people by Saddam Hussein's regime. On Sunday morning Americans were gripped by television footage of the former Iraqi dictator now in U.S. custody, his image transformed from an AK-47-toting, palace-dwelling tyrant into a scared, haggard-looking old man getting his mangy shock of hair inspected by a U.S. military medic.

It comes as no surprise that a top human rights leader would be as glad as anyone to see Saddam in U.S. custody. "No one who cares about human rights can be anything but grateful," William Schulz, the executive director of Amnesty International USA, told Salon in a phone interview Sunday afternoon. "The capture of Saddam provides a model opportunity for the United States and its coalition partners to demonstrate their commitment to [carrying out] international justice."

But the momentous capture of the former Iraqi dictator also carries a certain tension for critics of the Bush administration and its aggressive policies carried out in the name of the U.S.-led global war on terror. While hopeful of seeing Saddam brought to justice "in accordance with international standards," Schulz, who is the author of "Tainted Legacy: 9/11 and the Ruin of Human Rights," is cautious about what the tyrant's capture could mean for public perception of the Bush administration's war policies. While Schulz has been openly critical in recent months of the antiwar left's failure to address the complex issues of national security in the wake of 9/11, he reiterates that a number of Bush policies, including the USA PATRIOT Act and the detention of so-called enemy combatants in Guantánamo Bay, are responsible for corroding civil and human rights.

He believes that Saddam's capture should in no way vindicate such anti-democratic policies.

"If anything," he told Salon, "the capture of Saddam Hussein proves that an alleged perpetrator of horrendous human rights crimes can be taken into custody, and that the ability to do that does not depend in any way on violating other people's human rights."

While there has been much focus in recent months on the problems of Iraq's physical reconstruction, Saddam's capture thrusts into the foreground the essential challenge of repairing the Iraqi people's collective psyche -- one deeply damaged after decades of brutal repression. The United States, as Saddam's captor and as self-appointed leader of a high-stakes mission to reshape the Middle East into a more democratic region, will play a vital role in that process. Thus far, President Bush has signaled that the Iraqi people will be in charge of Saddam's trial. But the ability and readiness of the still-chaotic country to hold a war crimes tribunal remains in doubt. That's all the more reason, says Schulz, to ensure that there is adequate international oversight of due process for Saddam's trial.

And while the Bush administration helped sell the invasion of Iraq using the notion that Saddam had a hand in the 9/11 terrorist attacks -- a majority of Americans continue to believe he had a direct connection with al-Qaida, though one has yet to be proven -- Schulz also warns against letting Saddam's capture justify dubious Bush policies.

Salon reached Schulz by phone at his home in New York.

What does the capture of Saddam mean for the international human rights community?

Well, no one who cares about human rights can be anything but grateful for the fact that Saddam has been taken into custody. It's certainly a positive development that he was taken alive and therefore can be put on trial, and that those who have claims against him will, we trust, have an opportunity to have their cases heard by a responsible tribunal.

And it's important that Saddam be tried before a responsible tribunal, whatever form that may take. At this point Amnesty has not recommended any specific form for a tribunal, but whatever tribunal is chosen should be one that abides by international due-process standards.

What's your view of where and how Saddam should be tried?

Amnesty would probably favor a tribunal in Iraq, or an international tribunal of some sort. I think it's important that the Iraqi people have a role in such a tribunal. At the same time, it's important that the tribunal be seen by the world as having been fair and equitable, and that it has guaranteed Saddam his due-process rights. So it may be appropriate for the international community to play a role in the tribunal as well.

Do you believe Iraq as a society is organized and stable enough at this point to handle the trial?

I think that very much remains to be seen. It's certainly not clear at this point that Iraq by itself has the judicial structures in place to carry out such a trial. That is why I would think that some form of international participation would be desirable.

How important is it to the human rights community that Saddam was taken alive in terms of the information he might provide about the many human rights abuses of his regime?

It's very important, from several points of view. First of all, it opens up the possibility for people who had been victims, or whose family members had been victims of Saddam's regime, to confront him directly with his crimes. It provides an opportunity for those crimes to be laid out for the public record in a way that they otherwise might not have. It provides an opportunity to interrogate Saddam -- interrogate him appropriately, of course, without any mistreatment -- about various matters that could help resolve issues for the many victims of human rights crimes who suffered under his decades-long regime.

How long is it appropriate for U.S. officials to hold Saddam for interrogation before turning him over to a tribunal? And does the stature of a prisoner like Saddam -- the extraordinary degree of information he could potentially provide authorities -- justify any degree of coercion by his interrogators?

Of course Amnesty would oppose any form of coercion. I think the eyes of the world will be closely attuned to the treatment of Saddam. This is not a prisoner who will be easy to hide away in some remote corner of the globe. Clearly there will be intense scrutiny, both by Iraqis and the international community, of how this case is handled by the coalition authorities.

There's no reason to think that using coercion to interrogate Saddam is necessary at this point, nor is there any reason, to the best of my knowledge, to think it's being contemplated.

How important is the trial of Saddam in terms of setting a precedent for world affairs in the age of terrorism and preemptive war?

Even in recent years, there have been many precedents for how former leaders of countries who were responsible for crimes against humanity have been treated. Of course, there are precedents going back decades more as well. I think the international community has learned a lot since the Nuremberg and Tokyo trials. We've learned the importance of having these trials be seen as utterly credible and reputable, having the victims of the crimes and communities that have been victimized participate appropriately.

I would think that the capture of Saddam provides a model opportunity for the United States and its coalition partners to demonstrate their commitment to this form of international justice. Whether they will or not remains to be seen.

In your new book "Tainted Legacy," you're critical of the political left for spending much of its energy attacking the Bush administration, but not adequately addressing pressing issues of national security. The capture of Saddam is already being viewed by many as a huge boost for President Bush. Do you see it as any vindication of Bush's policies? And what should the political left and human rights advocates be saying about all this?

Well, the human rights community ought not -- and to the best of my knowledge it will not -- enter into the politics of this. It's not our concern whether this is a boost politically for President Bush or not. As I said very clearly in the book, while I certainly have great skepticism about the newfound rationale for human rights being behind the U.S. intervention in Iraq, I was also very critical of the French, Germans and Russians, who offered no alternative [to confronting Saddam] during the buildup to the war. The [antiwar left] had offered no alternative that would address in any realistic fashion the suffering of the Iraqi people under Saddam Hussein.

As I said, clearly the human rights community should welcome him being taken into custody, and believes that he should be brought to justice in accordance with international standards. And that he should be punished if he's found guilty within that process. If that ends up being a political plus for President Bush, so be it.

In your view, does the capture of Saddam justify or vindicate the way the U.S. carried out the invasion?

I guess that's not something I have an opinion about. As I've said before, Amnesty International doesn't take a position on military intervention per se. We didn't call for military intervention as a mechanism by which to stop the human rights abuses in Iraq -- though we certainly didn't oppose it on those grounds either.

Our concerns about the U.S. military intervention had to do with the process by which it was undertaken, in terms of the international community.

But are you concerned that Saddam's capture will reinforce or strengthen public support for Bush administration policies that Amnesty and others have strongly criticized? Namely the Bush doctrine of preemptive strikes against enemies that pose an "emerging threat" to the United States, and the administration's erosion of civil liberties in the name of fighting the war on terror?

I don't have reason to believe that this event in and of itself [bolsters] those Bush administration policies. Beyond what we've seen and heard on television, I don't know the details of how Saddam was captured, but I have no reason to think that the way in which he was captured was a violation of international human rights standards.

I don't see any direct connection between Saddam's capture and the other civil liberties and civil rights violations that the Bush administration is responsible for.

So the Bush administration shouldn't be able to point to this major victory in Iraq as a way to justify more broadly its national security policies?

I don't think that depriving a U.S. citizen of access to a lawyer, or violating the Geneva Conventions with the prisoners who are already in U.S. custody in Guantánamo Bay, or mistreating Muslim residents in this country ... I don't believe that any of those things -- or any of the other ways in which the Bush administration has violated human rights in its conduct of the war on terror -- contributed in a positive way to taking Saddam Hussein into custody. I see no connection.

I think that President Bush could have ordered the strictest adherence to human rights standards in all other respects and still taken Saddam into custody. As I understand it from preliminary reports, this success was largely a matter of military intelligence and military and police action of one form or another. If anything, it proves the exact opposite: that an alleged perpetrator of horrendous human rights crimes can be taken into custody, and that the ability to do that does not depend in any way on violating other people's human rights.