The menopausal romance "Something's Gotta Give" beats "The Last Samurai" at the box office. Do chick-flick fans dare hope that the tide of guns, honor and big-ass boats is ebbing? 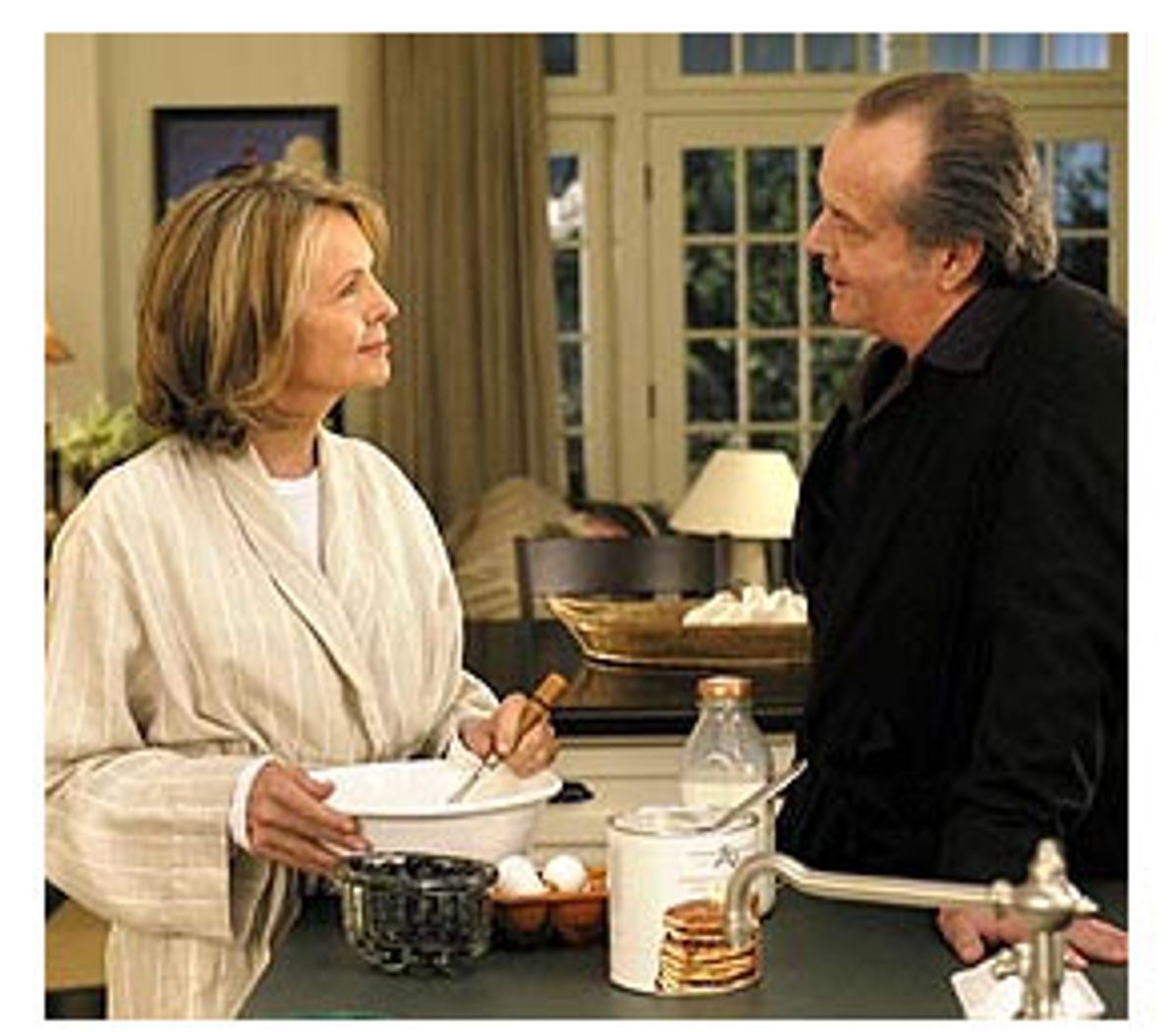 It may be one of life's smaller upsets, but something remarkable happened at movie theaters this weekend. "Something's Gotta Give," the romantic comedy written and directed by Nancy Meyers ("What Women Want") and starring 57-year-old Diane Keaton as a divorced mom who gets it on with both Keanu Reeves and Jack Nicholson, made more money than the Tom Cruise's expedition into Japanese warfare, "The Last Samurai."

"This is really good news for the much maligned upper-female quadrant," said Lynda Obst, the Paramount producer behind "Sleepless in Seattle" and last year's "How to Lose a Guy in 10 Days." She explains that the "upper-female quadrant" is a film-industry term for adult women, usually considered to be "the hardest audience to convert from interest to ticket buyer, so therefore the hardest to make movies for." This challenge is part of the reason that the "chick flick," née "women's picture" -- becomes increasingly imperiled with every passing year and every successful adaptation of a video game.

Since Hollywood executives are not convinced that enough people will shell out for films that reflect the realities or fantasies of women, they are reluctant to pay to make them. Obst says that the win of "Something's Gotta Give" at the weekend box office "means that people who want to make movies for older people -- and particularly older women -- can rejoice, and actually make the movies they want to make."

Admittedly, "The Last Samurai" was in its second week, while "Something's Gotta Give" was opening after a media blitz focused on Keaton's Best Actress award from the National Board of Review and her nude scene in the film. Not necessarily in that order.

But "Samurai" has been considered an Oscar contender, the other Civil War-era epic besides the upcoming "Cold Mountain," not to mention a vehicle for the country's biggest male movie star. After a semi-satisfactory opening weekend ($24 million), its backers could only hope that last week's East Coast blizzard had hampered ticket sales and rabid Cruise enthusiasts who'd been trapped under snow banks would emerge in droves to see their hero ride horses and wave big swords.

But "Samurai's" business fell off by about 42 percent in its second week. It made only $14 million, while audiences sought warmth with a couple of old coots, who are weirdly being marketed (to John Mellencamp fans?) as "Jack and Diane."

"Something's Gotta Give" made $17 million its first weekend. While that's not huge money in today's Hollywood, Obst describes it as "really terrific." She goes on, "Seventeen million represents people going in packs. And older women are not generally known to travel in packs."

Not that the movie has a shot in hell of keeping its top slot. Starting this Wednesday, with the release of "The Lord of the Rings: Return of the King," it's all hobbits all the time. And for those not already lined up in front of theaters wearing their mithril shirts and riders of Rohan helmets, there's "Mona Lisa Smile." This Julia Roberts vehicle, set at Wellesley College in 1953, has been tagged a "Dead Poets Society" for girls, and costars Kirsten Dunst, Maggie Gyllenhaal, Julia Stiles and Marcia Gay Harden -- and thus is being treated with the respect usually reserved for O.B. commercials. Its best hope in a season larded with Big Boats, Guns and Honor (see "Master and Commander", "The Missing" and "The Last Samurai") is that the traveling packs of "Something's Gotta Give" women are still scavenging multiplexes for something else. And that they have already seen "Bad Santa."

Although its glory is destined to be brief, something else about the opening-weekend success of "Something's Gotta Give" is worth mentioning. While older broads were certainly responsible for the film's triumph, one-third of the audience for the movie was under 30 and apparently perfectly happy to sit through a film riddled with Viagra, menopause and heart-attack jokes.