Is this the neocon century?

Richard Perle, one of the intellectual architects of the Iraq war, offers an acerbic defense of his ideology. 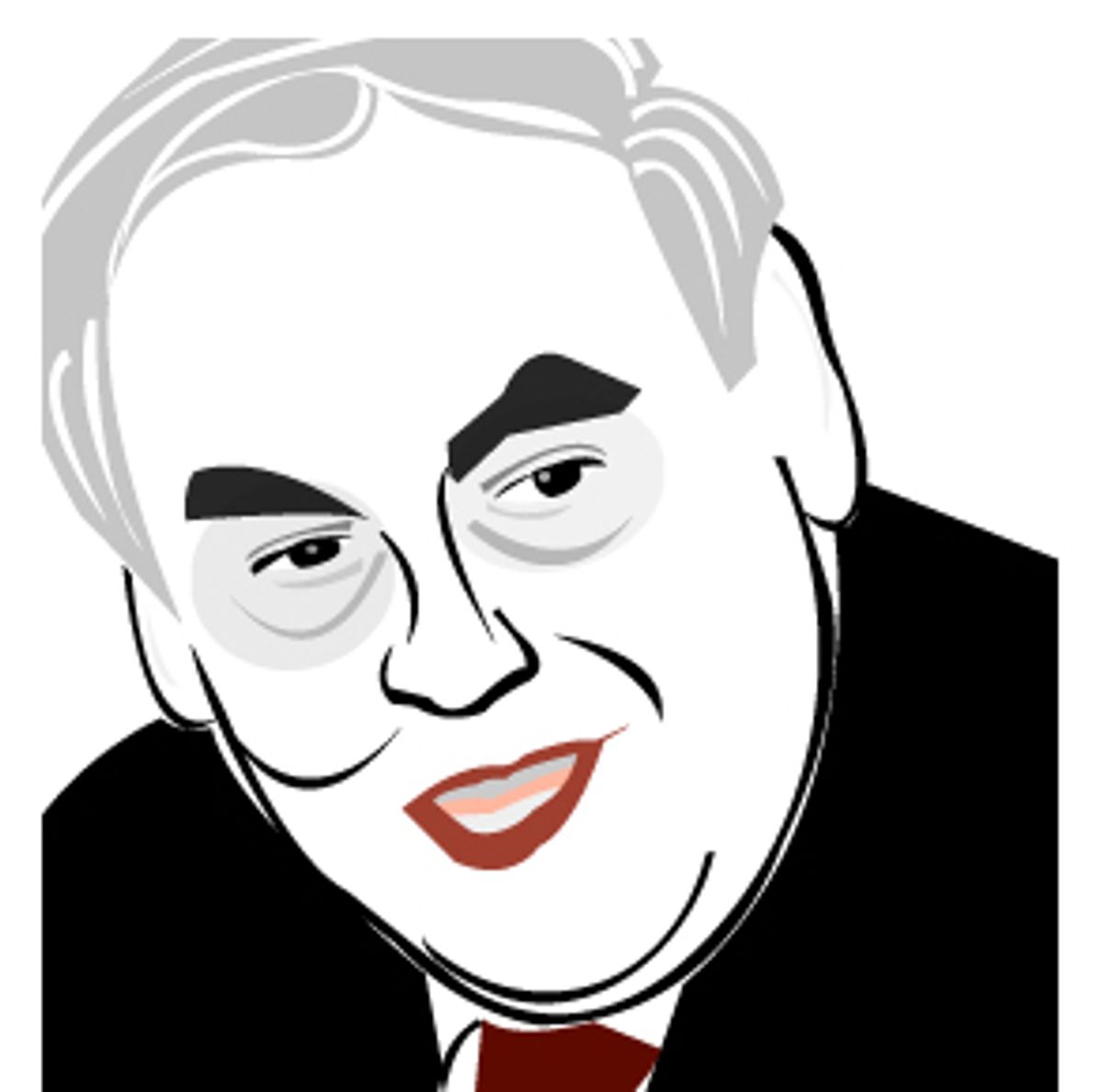 Neoconservatives are very sensitive people. Even those who've attained stature and power are exquisitely attuned to insults hurled from obscure quarters of the left as well as the barbs of French foreign minister Dominique de Villepin. It's not only bombastic blogger Andrew Sullivan who trolls Web sites like Indymedia.org, hunting for evidence of moral relativism. No less a personage than Richard Perle, the neocon kingpin who sits on the Pentagon's Defense Advisory Board, bristled with irritation when mentioning Talking Points Memo, the blog of liberal Washington journalist Joshua Micah Marshall.

To answer the criticism directed against his movement, Perle appeared with Marshall at a panel on Monday in Washington called "Is the Neoconservative Moment Over?" Perle's answer: Not even close.

"Not only is the neoconservative movement not over, it's just beginning," he said. "Also not over is the left's obsession with neoconservatism. If you look at Mr. Marshall's blog, it seems to occupy his every waking moment."

The panel was sponsored jointly by the Hudson Institute, a neoconservative Washington think tank, and the hawkish, Liebermanesque New Republic magazine, and it was moderated by neoconservative New Republic writer Lawrence Kaplan. Besides Perle and Marshall, the speakers included Gary Schmitt, president of the Project for a New American Century ("The object of many conspiracy theories," Kaplan said with a chuckle), and Adrian Woolbridge, Washington bureau chief for the Economist. The audience of 40 or so gray-haired eminences, packed into a small, fluorescent-lit conference room at the Hudson Institute's office, included Barbara Ledeen, wife of neocon bomb-thrower Michael Ledeen, and Michael Barone, a right-wing columnist for U.S. News and World Report.

There was little love in the room for Marshall. He recently co-wrote an article for the Washington Monthly about the qualifications, or lack thereof, of members of the Coalition Provisional Authority in Iraq. In it, he questioned whether 29-year-old Simone Ledeen, daughter of Michael and Barbara and advisor for northern Iraq at the Ministry of Finance in Baghdad, had enough experience to be charged with reshaping a quarter of Iraq's economy. At the end of the talk, Barbara Ledeen barreled forward to yell at him, wagging her finger in his face and shouting, "Shame on you!"

Aside from Marshall, few of the assembled were interested in contemplating the possible end of the zeitgeist that has empowered them, especially the day after the triumphant capture of Saddam. The real theme of the conference, then, wasn't "Is the Neoconservative Moment Over?" It was more like, "Are Critics of Neoconservatism Paranoid Anti-Semites Who Live in a Fantasy World?"

In his introduction, Perle ascribed the left's "obsession with neoconservativism" to its "visceral anti-Americanism." Yet if the left is obsessed with neoconservatives, neoconservatives are becoming obsessed with that obsession. In September, Joshua Muravchik, a resident scholar at the American Enterprise Institute (also home to Perle), published a 6,000-word rejoinder to neoconservatism's critics in Commentary. In it, he attacks the arguments that the neocons are the intellectual descendents of Leon Trotsky and of the political philosopher Leo Strauss, finding a whiff of anti-Semitism in his opponents' analysis.

Noting the profound differences between the two men, Muravchik writes, "There is, however, one thing that Strauss and Trotsky did have in common, and that one thing may get us closer to the real reason their names have been so readily invoked. Both were Jews. The neoconservatives, it turns out, are also in large proportion Jewish -- and this, to their detractors, constitutes evidence of the ulterior motives that lurk behind the policies they espouse."

Of course, the neoconservatives' harshest critics are also in large proportion Jewish, which Muravchik acknowledged while smearing them as self-haters. "Michael Lind, for one, has gone out of his way to assert his own Jewish 'descent,' and Tikkun is in some self-professed sense a Jewish magazine," he wrote. An hour-long BBC special about the movement had particularly incensed Muravchik, and he noted, "Even the BBC's assault on the neocons featured a Jewish critic [lefty journalist Jim Lobe] in the starring role. So passionate are these Jews in their opposition to neoconservative ideas that they have not hesitated to pander to anti-Semitism in the effort to discredit them."

Much of the debate Monday proceeded on about this level.

Moderator Kaplan began the proceedings by defining neoconservatism as "a robust approach to the foreign scene." It's a theory, he said, that "sees no inherent incompatibility between American interests and American ideals." Who could disagree with a theory like that?

The answer, according to Perle, is "ideologues investing their hopes not in the real world but in a fantasy world." These deluded sentimentalists would make American security dependent on international institutions and "signatures on pieces of paper." In Perle's view only the neocons, being hardheaded realists, are willing to do what it takes to keep the country safe.

And so it went, with Marshall trying, somewhat vainly, to argue that legitimate alternatives to neoconservatism existed, and a contemptuous Perle treating him as if he were a cross between Noam Chomsky and Tariq Ali. At one point, Perle mentioned the "execrable" Robert Fisk, the Middle East reporter for the British Independent newspaper, fierce critic of American foreign policy and hero to much of the left. Then he turned to Marshall and said: "I suspect he's a pal of yours."

Woolbridge, a wry man with tousled hair and small round glasses, also tried to raise questions about the neoconservative project, suggesting that democratizing Iraq may be insurmountably difficult. Perle, though, wouldn't engage him. Instead, he proceeded as if all the events of the past three years -- from Sept. 11 to the capture of Saddam -- have vindicated his beliefs. Despite Woolbridge's efforts, the question of whether the neoconservatives bear any responsibility for providing faulty intelligence about Iraq was hardly debated.

"The fact that we have failed to unearth stockpiles [of weapons of mass destruction] doesn't change the assessment that had to be made at the time," said Perle. He was unrepentant about his criticism of the CIA's intelligence on Iraq, despite the fact that it appears to be more accurate than what the neocons themselves came up with through the intelligence operations they set up to bypass the agency. "A number of institutions on which we depend are badly in need of reform," Perle said. "The CIA is in terrible shape. The FBI is not much better. The State Department has always been problematic when it comes to fighting a war." Yet despite these handicaps, Perle said, "we've done awfully well with the resources at our disposal.

"Saddam Hussein living in a spider hole is much less capable of conducting operations against us than if he had a government behind him," said Perle. "Our goal must be to drive terrorists into spider holes." It was left to Marshall to point out once again that no one has yet produced evidence that Saddam was in league with terrorists plotting operations against America.

At one point, Perle asked Marshall what he might have done differently than the current administration. Before the war, Marshall had argued that America needed to take action against Saddam but that the administration botched the diplomacy necessary to build a winning coalition, and he said much the same thing Monday. "I don't think we needed to be in that kind of rush," Marshall said, adding that a more deliberate approach would have garnered more international support, and with it, more money and troops for Iraq's reconstruction.

"Mr. Marshall says he would have left Saddam in place, " said Perle. "He says leave him in place and gather international support." But that, Perle said, would have been an "unacceptable risk."

The war, like neoconservative doctrine in general, has "nothing to do with some philosophical predisposition," Perle said. Its only impetus is pragmatism.

This meme -- that neoconservatism is dictated by the march of history, not the dreams of theorists -- was repeated by both Perle and Schmitt. When Marshall made the innocuous assertion that neoconservatives have had an influence on the Bush administration, Perle retorted: "Reality has had an influence." Later Schmitt claimed that any other president, whether a Carter-style liberal or realist like Bush père, would pursue the same foreign policy as the current administration.

They might try other approaches, he said, but "the logic of the situation, the reality, is going to pull them towards policies that look like the Bush administration's."

Put that way, the criticism of the neocons does seem unfair. After all, whatever the result of their Iraq policy, it's not their fault. The dialectic made them do it.