Orville and Wilbur Wright and a selection of the greatest moments in commercial aviation. Plus, the true significance of Dec. 17. 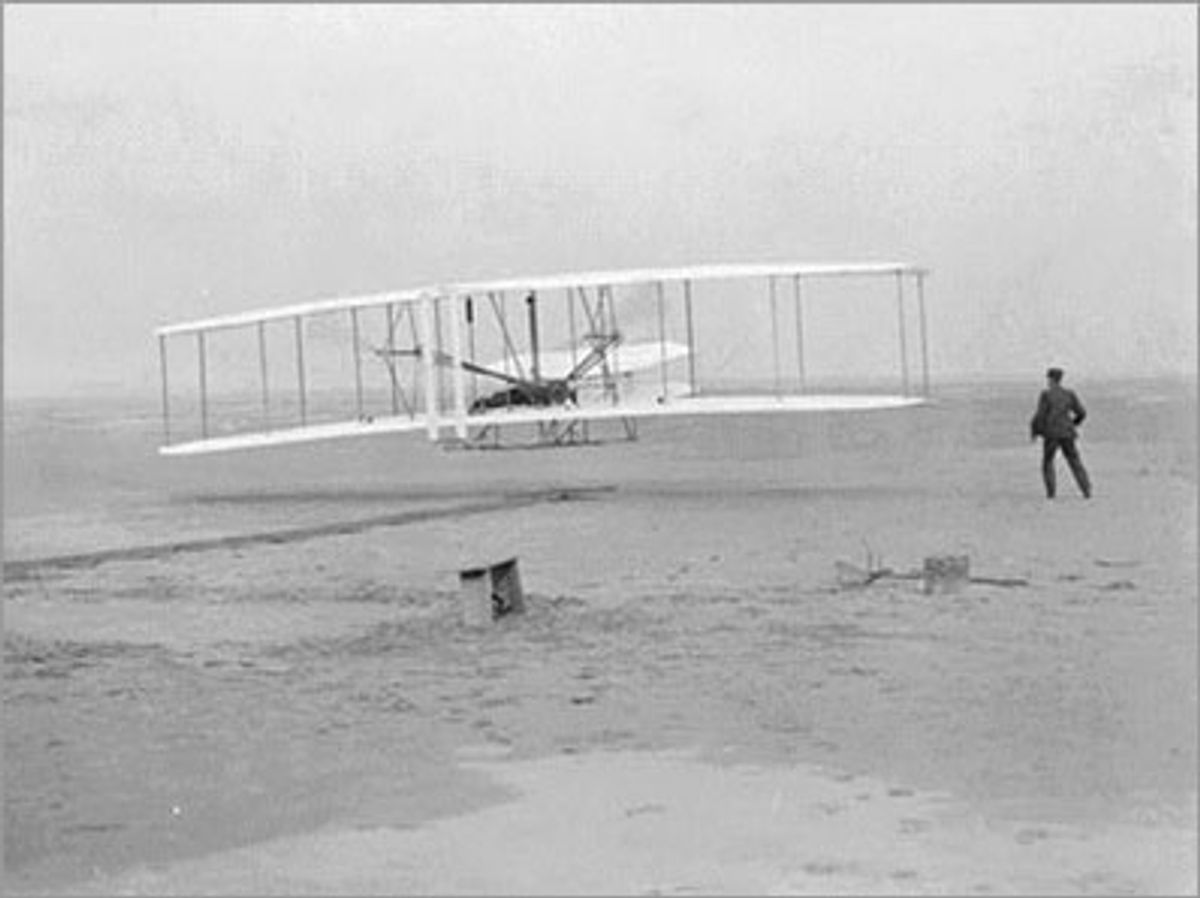 On that day, amidst some barren Outer Banks dunes, two high school dropouts from Ohio, Wilbur and Orville Wright, became the first human beings to fly in an airplane. Their vehicle, little more than a manned and motorized box kite, was a 600-pound assemblage of ashwood and stretched muslin. They called it the Flyer. Like a bird, its wingtips were pulled, warped, and twisted to maintain lateral balance.

Taking turns at the controls, the brothers completed four flights that day, the longest lasting less than a minute. The first of them, around midmorning, with Orville lying prostrate in the cockpit, lasted 12 seconds and traveled 120 feet. That's just about half the fuselage length of a Boeing 747.

Aside from the brothers, five other people were on hand -- men by the names of Brinkley, Dough, Ethridge, Daniels, and a 17-year-old kid named Johnny Moore. Brinkley was a nearby farmer. He and the young Moore, an out-of-town visitor, had simply wandered over. The remaining three were staffers from the nearby Kill Devil Hills Lifesaving Station -- lifeguards, you could say, who'd tromped across the sand to assist with the rail, ropes and guide-wires used to launch the Flyer.

The Wrights had been building and testing gliders along the Carolina shoreline for the past three years, routinely recruiting the help of local residents. There was lumber to move, rigging to assemble, gliders to carry up ridges of sand for launch into the stiff Outer Banks winds. So the presence of these helpers was nothing new.

A few days earlier, on the 14th, the brothers and a similar volunteer ground crew had made a first attempt. With Wilbur steering, the Flyer stalled after takeoff and fell to the sand. They spent the next two days making repairs.

Today, though, would be different.

John T. Daniels, one of the lifeguards, was put in charge of a cloth-draped 5-by-7 glass plate camera stuck into ground by Orville. He was instructed to squeeze the shutter bulb if "anything interesting" happened. Good scientists that they were, the Wrights were consistently careful to document their accomplishments with film, logging the shutter and exposure settings for every shot. The camera was aimed at the space of sky -- if a dozen feet of altitude can be called such -- where, if things went right, the Flyer would emerge in its first moment of flight.

Things did go right. The contraption rose into view and Daniels squeezed the bulb.

The image captured in Daniels' squeeze, later developed by Orville upon return to Dayton, Ohio, and since reproduced millions of times, is about the most evocative and beautiful photograph in all of 20th century iconography.

We see Orville, visible as a black slab, more at the mercy of the plane than controlling it. Beneath him Wilbur keeps pace, as if to capture or tame the strange machine should it decide to flail or aim for the ground. You cannot see their faces; much of the photo's beauty is not needing to.

I'm not much of an enthusiast when it comes to the early days of aviation, yet there is something irresistibly and ironically profound about that photograph. It is, at once, the most richly promising and bottomlessly lonely image. All the potential of flight encapsulated in that shutter snap; yet we see, at heart, two eager brothers in a seemingly empty world, one flying, the other watching him. We see centuries worth of imagination brought to a bleak, almost completely anonymous fruition.

Which is probably how it works -- how it has to work -- with many of history's more pivotal moments. This one, though, we've got on film.

Looking at the figure of Wilbur, it's tempting to imagine him exalted, to see Daniels' picture as one of restrained but almost desperate excitement. Serious as the moment was, the Wrights were too serious for that. There would be no celebration; not even a press release. No sooner had those 12 seconds elapsed when it was time to call in the crew and drag the Flyer back to the rail. Three more flights to make.

Wilbur died of typhoid fever in 1912. His younger sibling, however, lived until 1948. By then, Douglas had invented the airliner with the DC-3, the Enola Gay had let loose its cargo over Hiroshima, and Frank Whittle and Hans von Ohain had perfected the jet engine. One could say that Wilbur Wright lived just long enough to see his invention come of age, something every inventor dreams of, but rarely experiences.

KLM, the world's oldest airline, operates a 747 freighter named in honor of Wilbur. Elsewhere I ransacked my files looking for incorporations of the Wrights' vision into modern-day civil flight. Instances are rare, which is either the coarsest of crimes or the inevitable progression of technology.

For years the tail emblem at Japan's All Nippon Airways featured not the Flyer, but the 16th-century helicopter design of Leonardo da Vinci. Da Vinci's rigged corkscrew looks brilliantly, intuitively flyable, but never would have made it off the ground. The tribute was nonetheless a touching one, and I imagine the Wrights, engineers who endured their share of trial and error, would accept the snub graciously.

A montage of 20th century air-flight achievements -- de rigueur this month in publications and commemorations around the world -- calls out the usual suspects and their heavier-than-air machines: Lindbergh to France in the Spirit of St. Louis; Amelia Earhart disappearing over the Pacific; Yeager and his X-1 sailing through the sound barrier; Concorde.

My votes for aviation's three most important events aren't terribly at odds with the wisdom of greater experts. But aside from the happenings of Dec. 17, 1903, such benchmarks are, to me, less a matter of first, fastest, or highest, than a matter of scope, scale and influence. They are also, in keeping with the kernel of my affections for airplanes and the point of this column, decidedly within the realm of commercial air travel.

1. The Douglas DC-3, rolled out for American Airlines in 1935, wasn't really the first of anything, but it perfected the evolution of the all-metal passenger transport to become the first truly profitable and mass-produced airliner. So many thousands of DC-3s were built, in civilian and military versions, both in the U.S. and under license abroad, that nobody can cite a comprehensive count. As late as the 1960s more than 1,500 were still in airline service. Today several hundred remain flyable, and every airliner, from a 19-seater to the 777, bears a debt to this old piston twin.

2. In much the same way, Boeing's four-engined 707 changed air travel forever. The 707 was third in jetliner chronology -- the star-crossed de Havilland Comet and the Soviets' Tupolev copycat came before it -- but it was faster, with greater range and more seats, taking the Comet's ill fortune and turning it into gold. At twice the speed of mainstay prop liners, it safely crossed oceans and continents in unimaginable time. When, in 1958, Pan Am launched the 707 between New York and Paris (just like Lindbergh), the jet age truly was born.

3. Boeing's 747 was the next great leap. The industry's first-ever widebody -- and for now still the largest ever built -- it took the 707's economies of scale and more or less doubled them, ushering in, like it or not, the concept of affordable travel for the masses. Pan Am was first again, and its Clipper Victor debuted between New York and London on Jan. 21, 1970. Boeing had staked its entire future on the project, and the gamble paid off. Into the 1990s the 747 was the plane maker's most profitable model and it continues in production.

Yes, well, sorry to some of you prone to lobby for something flashier. Concorde might make a prettier icon than a 707, 747 or DC-3, but sexy and expensive, it proved nothing beyond the non-viability of the SST concept. Perhaps when hydrogen replaces kerosene this category will be reborn. Until then, here's your supersonic whiz jet.

On that note, coming soon will be the Airbus behemoth, the A380. A revolution in air transport? Not exactly. It's worth remembering that 34 years ago the 747 offered more than twice the capacity of the next largest jet at the time (a stretched version of the DC-8). By contrast, the A380 will weigh in roughly a third bigger than the 747, carrying a comparable number of people over a comparable number of miles. And, I should add, with none of the 747's elegance.

Pardon me now while I digress now on a personal tangent. Those not interested in some sentimental mush-mouthing may click elsewhere and have a nice day ...

For the past two decades I have come to associate Dec. 17 not with flying at all, but with music. Or, more correctly, with being young. These things happen, I suppose, to those among us who tend to over-anniversarize our lives and infatuations. Twenty years ago, on Dec. 17 1983, I saw my first Hüsker Dü concert at a place called The Channel in downtown Boston. The Channel, since demolished, was a warehouse-like venue hung along the edge of the harbor. Inside, it stank of clove smoke and seaweed.

Somewhere there's a handful of people who appreciate what I'm talking about. All of us feeling like aging Deadheads -- or maybe Düheads, or something pathetic like that. Bob Mould, decked out in a Hawaiian shirt, was flicking handfuls of guitar picks into the audience. Opening act was the Minutemen, another early '80s trio with its share of apostles. I remember my friend Mary, pressed against the stage, attempting to tie Mike Watt's shoelaces together.

I nearly killed myself at that show, sliding backwards over the shoulders of some rowdy stage-divers (moshers, that would be, in today's silly parlance), and hitting the floor not with my feet, but upside down with the back of my neck. For several seconds I couldn't move my arms or legs.

That's one of two occasions in my life when I thought I was either dead or about to be. The other time, a few years later, was, yes, in an airplane. For that story you'll need to wait a few columns, but I promise it's coming.