SCO, open source and the world

While a small Utah company launches a frontal assault on free software, the rest of the globe is saying: Gimme some of that! 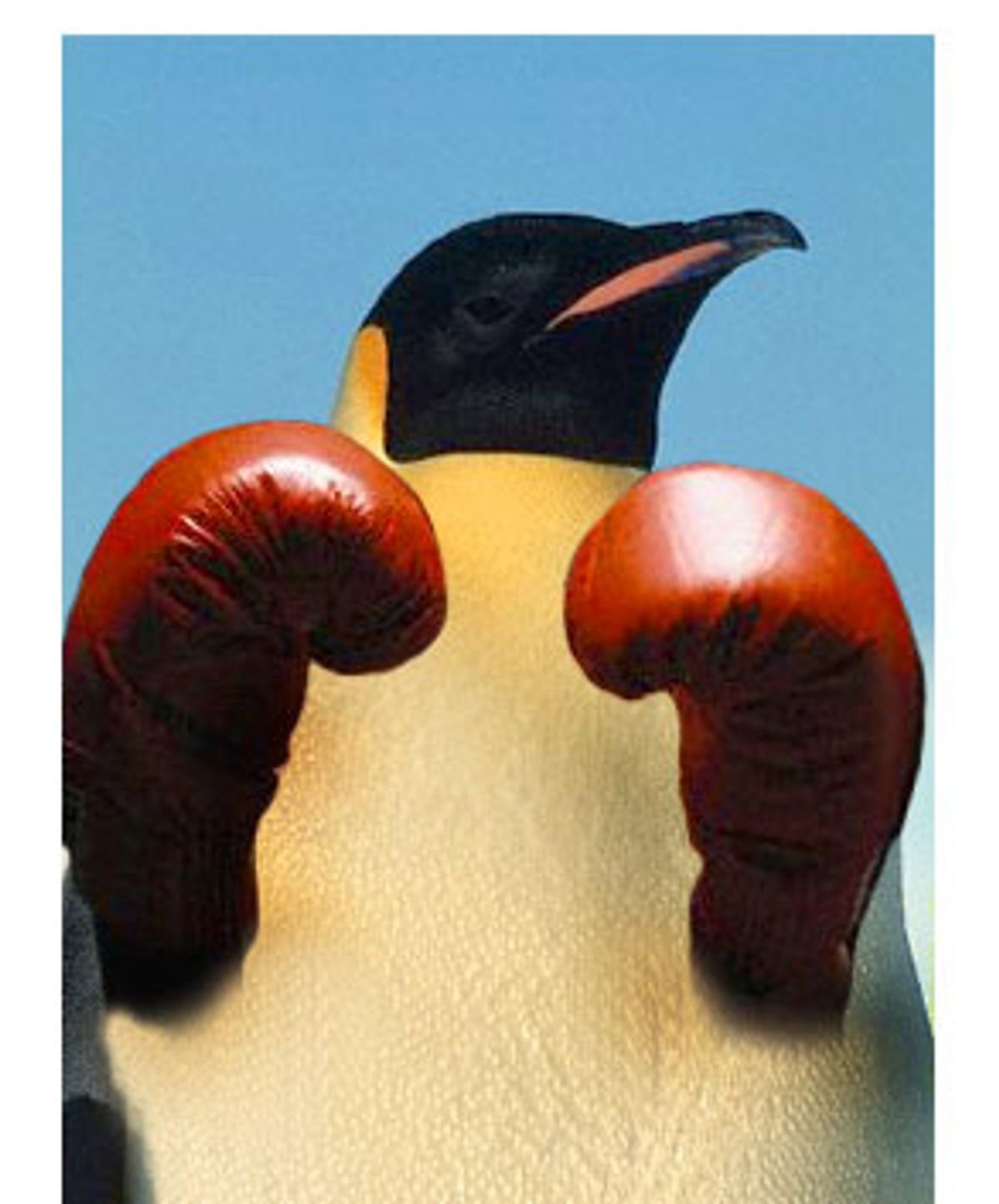 On Dec. 4, Darl McBride, CEO of the SCO Group, unleashed the latest of his periodic broadsides attacking the world of Linux and open-source software.

"There really is no middle ground," wrote McBride. "The future of the global economy hangs in the balance."

The SCO Group is the Linden, Utah, outfit whose yearlong lawsuit against IBM has riveted the attention of the software universe. The company has inflamed the passions of thousands of open-source software developers by committing to a strategy of tarring Linux, which IBM supports commercially and which SCO representatives claim was a depository for misappropriated Unix source code licensed by SCO to IBM.

Labeling the political philosophy and legal strategies of the free-software movement "ill-founded" and "contrary to [the U.S.] system of copyright and patent laws," McBride has been unafraid to frame his company's legal battle as an all-or-nothing crusade. His bold statements are a major reason that the SCO-vs.-IBM battle has dominated open-source news coverage throughout 2003. Looking back at the "year in open source," it might even seem that SCO was the only story anyone was paying attention to.

But while it's true that the SCO-IBM battle does have long-term legal implications -- a victory on SCO's part would certainly jeopardize the popularity of Linux as a low-cost software tool for U.S. and European information technology (IT) departments -- extending those implications to the world at large hits a stumbling block as soon as you consider the other major open-source storyline of 2003.

Here's a brief recap: In March, the same month SCO filed its lawsuit, a Japanese daily newspaper, Nihon Keizai, revealed that more than 100 Asian software developers were meeting in Thailand to lay the groundwork for an Asian offshoot of Linux. In September, the month McBride launched his first open letter, which attacked "structural flaws" in the Linux development process, technology ministers from China and Korea confirmed joint plans to underwrite the earlier-mentioned localized version of Linux in the hopes of building a regional wireless network capable of supporting 200 million low-cost (that is, Linux-powered) devices.

And finally, in November, as McBride was preparing his latest open letter, Sun Microsystems CEO Scott McNealy announced to a Las Vegas Comdex audience that his company had forged a deal with the Chinese government to ship up to 1 million desktop versions of the Java Desktop System -- Java tools bundled with Linux and the open-source StarOffice application suite -- by the end of 2004, a deal that, when completed, would automatically make Sun a front-runner in the Linux desktop market.

"That's not the only opportunity," boasted McNealy, alluding to similar upcoming deals. "We're out calling on every [technology] ministry on the planet."

In other words, what we have here are two diverging storylines. In one, the future of open source is in jeopardy or, at the very least, a cause of division among corporations. In the other, open source is becoming a unifier of markets, governments and the companies eager to serve both. These warring realities offer as much proof as one could beg for that free software is relevant to today's technology sector. And McBride is right -- the future of the global economy is at stake. But as far as a vast portion of the world is concerned, SCO's CEO is fighting for the wrong side.

Tossing aside the parochial biases of the U.S. news media, the split nature of open source's growth trajectory is troubling, because it parallels the much more significant geopolitical schism that finally broke to the surface in 2003. If you take a look at the governments that have officially embraced open source over the past five years -- governments in China, India, France, Germany and Brazil -- you get a rough outline of the "against us" camp in the current Bush administration world view. The overlap isn't perfect, of course, but it's close enough to suggest both a linkage and a set of ideological tensions that go beyond the issues of terrorism and international security.

This tension was evident in the run-up to this month's World Summit on the Information Society in Geneva. Hosted by the International Telecommunication Union, a U.N. agency, the WSIS was originally billed as a Kyoto-style gathering of government officials and nongovernmental organizations who wanted to address the "digital divide" separating citizens in technology-driven economies from their counterparts in the developing world. That billing proved ominous, however, as U.S. and non-U.S. contributors to the summit's framing documents repeatedly clashed over language that would have put U.S. proprietary software corporations at a future disadvantage.

A good example of this clash was the summit's draft "Plan of Action." As recently as August, preliminary versions were calling on governments to "encourage" the "development and deployment of open-source software" as a way to facilitate access to information technology "at an affordable cost." When U.S. representatives argued this encouragement overlapped with the regulatory power of the World Intellectual Property Organization, drafters neutered the language in the final document. Instead, they called on governments to "encourage research and promote awareness" of the "possibilities offered by different software models," namely proprietary, open-source and free-software development models.

According to Evan Leibovitch, president of the Linux Professional Institute, a Canadian nonprofit that was one of only a few open-source advocacy groups to be represented at the summit's trade fair, the similarities between Kyoto and Geneva are far from accidental.

"Countries are almost starting to look at open source as an environmental issue," says Leibovitch, whose organization gave out more than 5,500 CDs containing free copies of Linux. "They can see for their own eyes, regardless of what anybody says to them, that open source is giving the ability to create jobs, to create opportunities, to create an IT industry independent of any outside control."

Bob Rogers, founder and president of the Global Information Infrastructure Commission, a consortium of IT and telephony executives, and another summit attendee, sees the U.S./non-U.S. schism from a different viewpoint. As a former telephone company executive used to looking to the Federal Communications Commission for guidance, he has spent the better part of the past year tuning into alternate frequencies just to keep up with his overseas commissioners.

"This open-source issue has just become so big," Rogers says. "I'm a telecom guy and I'm just inextricably being drawn into it."

One way to look at the schism is to see it as an inevitable consequence of the global economic downturn triggered, in part, by the U.S. technology crash in early 2000. As was true in the last big slowdown, the Great Depression of the 1930s, governments have grown more aggressive in protecting their domestic markets. None, however, have broken away from the global marketplace as some did in the 1930s. The commitment to free trade remains strong in places like China, India and Brazil, where governments have learned to balance state socialism with market-based incentives.

Adopting the philosophy that the best defense is a good offense in the current global economy, these same countries have followed the Keynesian path of pouring money into infrastructure improvements as a spur for future economic growth. Viewed from this perspective, open source becomes almost a no-brainer: a way to build your domestic software industry on the cheap.

Ironically, it is the United States that has most closely followed the old 1930s recovery model. Steel tariffs, increased military spending, and the recent exclusionary economic moves in Iraq all have a decidedly "retro" feel, even if driven by necessity.

That such responses have been coupled with a hands-off policy on communications and information technology has already caught the attention of those, like Rogers, who prefer not to bash the White House but hate to see the United States lose a step in the global marketplace.

"You get somebody like the secretary of commerce speaking about things IT, and it feels like a speech somebody else has prepared," says Rogers. "When it comes to tax cuts, though, he can speak off the cuff for minutes on end."

Foreign observers such as Colin Teese, a former deputy trade secretary in the Australian government, are even more concerned. In a magazine column written last month, Teese lamented that the 1990s global economy is already breaking into three major trading blocs: Europe, the Americas and East Asia. If such a trend continues, he said, peripheral players who pledge allegiance to the world's No. 1 economy by default might be doing their countries a disservice.

"Those countries which ignored the economic prescriptions of the English-speaking Western world have done better -- in terms of economic growth -- than those who followed them," argues Teese. "It is hard to imagine that the U.S., whether or not it clings to its present economic policies, can hope to match the combined growth rates of the emerging Asian countries."

Economic downturns and fears of Asian supremacy tend to run on the same periodic cycle. For all we know, another bubble might already be in place. China's government spending and dodgy bank loans have already created a money mirage good enough to lure foreign investors with short memories of the dot-com collapse.

That said, a government that pays only $50 per Linux desktop can certainly spread its money a lot further than a government that insists on paying retail prices for, say, Microsoft Windows. The big question is already in place: Which government economic stimulus package will prove the wisest by the end of the decade?

Such questions are a long way removed from the SCO-vs.-IBM legal dispute, but they tie in well with the argument advanced by McBride: The middle ground is disappearing, and the future of the global economy is at stake. The only uncertainty is whether such a "stake" can be divvied up in the narrow confines of the U.S. judicial system.