A certain breed of parent is happily buying postmodern rugs, art deco lamps and vintage sports posters for their children. But who are these items really for? 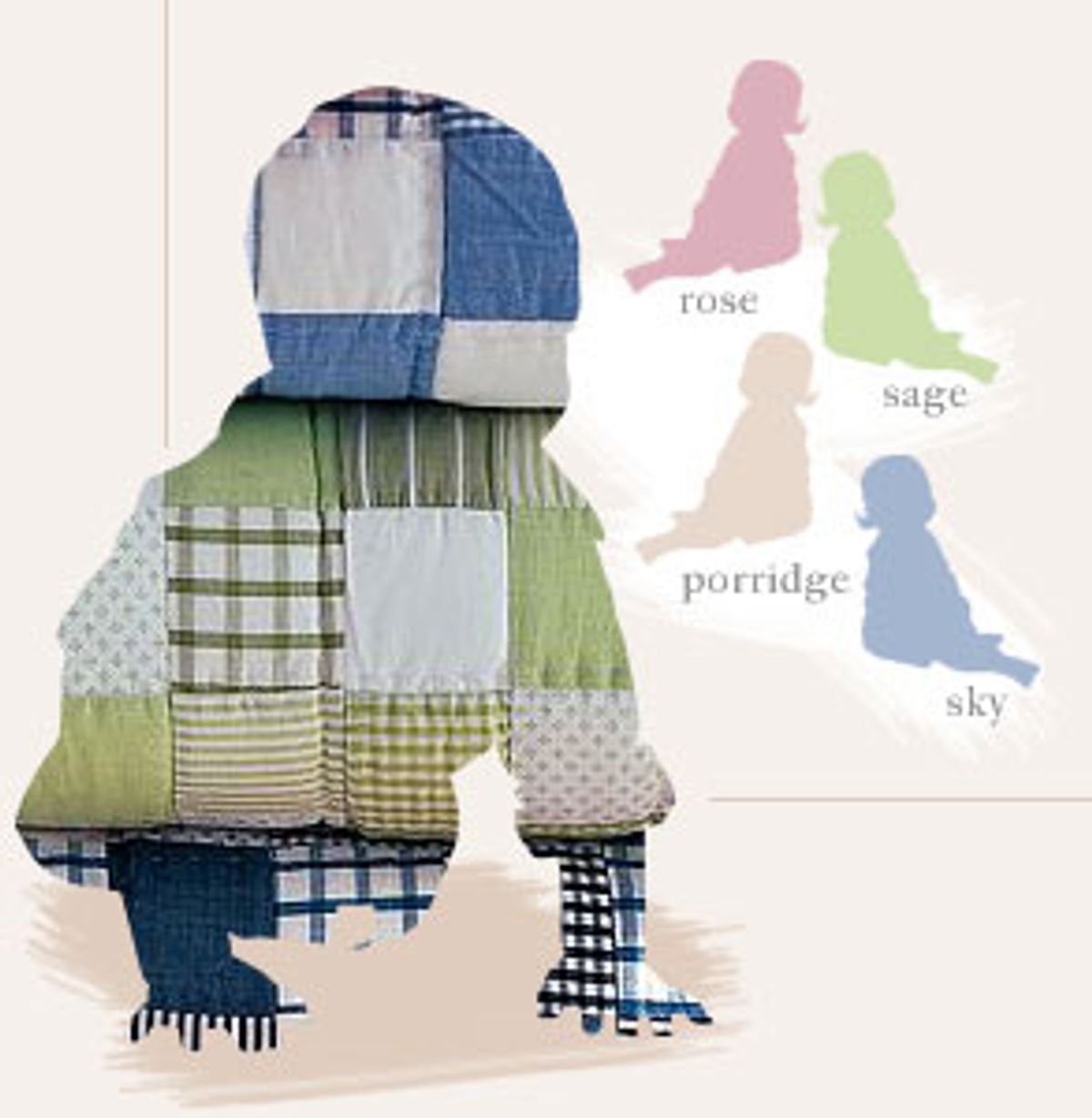 I slept with my Star Wars comforter until I was 10; by 1982, when I finally crammed it into the back of my closet, behind the life-size E.T. bank, most of the stuffing had escaped through unmended tears at the seams and its original role as a source of warmth had been long since forgotten. Still, for half a decade, nothing made me happier than waking up every morning to the sight of a poorly painted Wookie across my chest. That officially licensed duvet, with its overcrowded starscape of characters and horribly clashing color scheme, was not an item my parents found particularly attractive. Yet they, just like the parents of my friends, quietly suffered the whims of prepubescent interior design. My desire for that sci-fi bed set went completely unquestioned.

Although it would probably have been more pleasing to the adult eye, I can't imagine the younger me would have had the same fondness for a reversible embroidered silk Pottery Barn Kids quilt with matching sham. I try to keep this in mind now, when purchasing décor for my daughter's room. It's difficult, though; I know a Dora the Explorer light fixture would elicit endless squeals of delight, but would it go with the Picasso print hanging over her crib?

The bedrooms of today's preschoolers have a decidedly different aesthetic than those of my Mattel-driven youth. Gone are the Willy Wonka-inspired candy murals, the Smurf-shaped beanbag chairs, the My Little Pony window treatments. In their stead we see braided chenille rugs, hand-painted boutique lampshades, and four-poster beds draped with mosquito netting. What happened to those hideous "Hey! I'm sleeping in a Ferrari!" racecar beds that sat in the rooms of every sitcom preteen between 1978 and 1985? Either children have far more sophisticated tastes than they did a few decades ago, or today's parents, when they buy for their kids, are really buying for themselves.

Perhaps the answer lies more in marketing than pure selfishness. Sure, the current crop of new parents is a product of the "Me Decade," but there's more to it than that. Mine was the first generation of kids to have TV shows based on toys, instead of the other way around. And we were among the first guinea pigs to experience children's advertising after the National Association of Broadcasters deregulated it in 1982. Now that we have purchasing power for our own children, a whole new army of adult brands is seeking to lay psychic claim to the cash we've earmarked for our offspring. That's why we're spending $70 on white cashmere Baby Gap sweaters for children we know will inevitably puke on them.

Grown-up stores marketing children's items add to the misconception that kids are just like adults, only smaller. And the unfortunate side effect of that theory seems to be the burgeoning concept of parenting by art direction: The belief that one can mold his or her child's personality by purchasing the appropriate accoutrements. ("But, sir, my daughter couldn't possibly have been the one who started the fight; everything in her room belongs to the same Victorian teddy bear theme.") We follow this line of thought in part because we are easily duped by catalog-induced fantasies.

Flipping through the Pottery Barn Kids 2003 Christmas catalog, one is amazed by the apparent fact that most grade-schoolers are not only very tidy, but organized to the point of OCD. Checked-off to-do lists serve as centerpieces for several rooms, and every vintage toy and logo-less crayon is stowed away in its appropriately labeled wicker basket. Children are also seemingly much more well-behaved than films like "Mr. Mom," or "Daddy Day Care," or, say, most people's home movies, would have us believe. Children study diligently at their antiqued white desks, they cut out paper dolls, they brush their teeth, they use flash cards, and on Christmas, they sit in their individual monogrammed armchairs and stare at the tree. (In keeping with the season, the current catalog also offers monogrammed stocking, monogrammed ornaments, monogrammed wooden sleds, monogrammed turkey aprons, and, of course, monogrammed Santa hats.) The pages of this catalog feature no fewer than 26 children who are either reading, writing or engaged in some kind of non-messy craft project. You can almost sense an eerie silence in the photos, as if the only thing a foley artist would need to do to score this catalog would be to leave his microphone in an empty cathedral.

We can only jump to one conclusion: Stylish, trendy, modern but old-looking furniture creates perfect children. But take a closer look and you may start to question for whom these rooms are actually designed. How many 7-year-old boys do you know who are obsessed with 1940s-era floppy leather football helmets? Yet we see an entire room devoted to that very motif. In fact, a common trend among Pottery Barn Kids is a fondness for things that were popular 40 years before they were born. As evidence, I present the brothers who own several jars of marbles, the boy with the Adam West-era Batman comic, and the young man whose favorite movie, based on the poster hanging over his bed, is the 1965 Dale Robertson western "The Man from Button Willow."

It's a common belief that the way we decorate our homes is an expression of who we really are. And we've now begun twisting that concept in terms of our children, believing that the way we decorate their rooms is an expression of who they will be. Pottery Barn offers hope of orderly, intellectual, very urbane children, the kind that most orderly, intellectual, urbane adults want. They're the kids who will grow up to attend the subdued yet jazzy cocktail parties that are the intended destination of everything the adult version of Pottery Barn sells.

The Ikea catalog, in contrast, promises a completely different kind of child. The Swedish manufacturer's lower price points naturally lend themselves to a more bohemian philosophy from that of Pottery Barn. Ikea kids don't just sit quietly and do their homework, they boldly climb all over the furniture; they hang from the ceilings; they devour ice cream cones and let the melting soft-serve drip all over their faces, because they know how to enjoy life, dammit! On the pages of this catalog you will find children who are creative, free-thinking, and liberally inclusive -- each Ikea household appears to be overrun by a multi-ethnic brood of dreamers.

The 2004 catalog, narrated from the kids' point of view, labels its rooms with sobriquets like "City in the Clouds" and "The Good Smell Factory." It encourages wild and wacky creativity, like donning flippers in the bathtub or wearing a tiara while watching your flat screen TV. It celebrates the curious nature of kids who snoop through their parents' drawers, like the little girl on Page 13, who says, "The City in the Clouds has lots of hidden treasures. Including some things your parents thought you didn't know about." Ikea kids don't let anything hold them back, not even an inability to pronounce umlauts. They want their toys stored in suspended overhead nets; they want shredded shower curtains; they want to have their courage challenged nightly by a stuffed bee the size of a Macy's float hovering in the corner of their room. The parent who chooses Ikea is proudly shouting to the world, "It's OK if my child becomes a starving artist! And I'm going to show him that by making sure no two objects in his room are the same color!"

So the question is, which kind of kid do you want: Pottery Barn or Ikea? Or Bloomingdale's? Or Target? My apartment is currently half-Pottery Barn, half-Ikea, so you can imagine the state of confusion I'm in. There's suddenly a brand new worry for parents: anxiety over buying for the right subculture. Thankfully, we can all look back upon our own youths to find an easy solution to this dilemma -- just buy whatever your friends buy. But this strategy leads to peer pressure. Parents can be made to feel horribly inadequate when they take their preschooler to a friend's house for a lunchtime play date and watch the other child climb into his hand-crafted Italian booster seat, or upon realizing that the Crate & Barrel entertainment unit in their friends' family room is stocked with the entire line of Baby Einstein videos while they know their own daughter is back home engrossed in her 17th viewing of "Lilo & Stitch."

A curious segregation sprouts up between parents who opt for different accessory styles, and it can be just as dramatic as the rift between the cry-it-out crowd and the attachment parents. Roll a hulking Graco stroller down the streets of Manhattan and you'll be greeted with xenophobic stares from all the Maclaren pushers. But this is not just urban elitism; it goes both ways. Take one of those lightweight Maclarens with you while visiting relatives out in SUV country and you'll have incredulous neighbors asking you where the baby's cupholder and clip-on toy rack are.

Still, all of these well-thought-out purchasing decisions are just wishful thinking on our parts. It's not abnormal for parents to want their kids to be like them. But what seems oddly pathological about the current obsession with childhood accoutrements is that we apparently want our children to be like our current selves, not like we were when we were their age. How else can we explain toddler products being retailed by Starbucks? (Yes, the ubiquitous coffee house chain once offered the short-lived "Bearista" sippy cup which was eventually recalled after being deemed a choking hazard.) We need to come to grips with the fact that they're simply going to be who they're going to be, despite our best attempts to pigeonhole them while they're young. There's a part of me that knows that no matter how many Shakespearean pop-up books I ply her with, my daughter will still end up captain of her high school's co-ed lacrosse team.

I honestly don't know if my parents had any kind of future vision for me when I was growing up. I'd like to imagine that, with some kind of pop culture foresight, they knew that I'd be able to pull that Star Wars blanket out of retirement when I was in college and score major kitsch value points with my dorm mates. But they probably just got it for me because I liked it. The one thing I know for sure is that the only marketing and peer pressure that contributed to the purchase of that particular movie tie-in was directed solely at me, the child.