Video gaming and its discontents

Was 2003 the year of the great online multiplayer gaming flameout, or the year when a whole new approach to computer games finally gained real momentum? 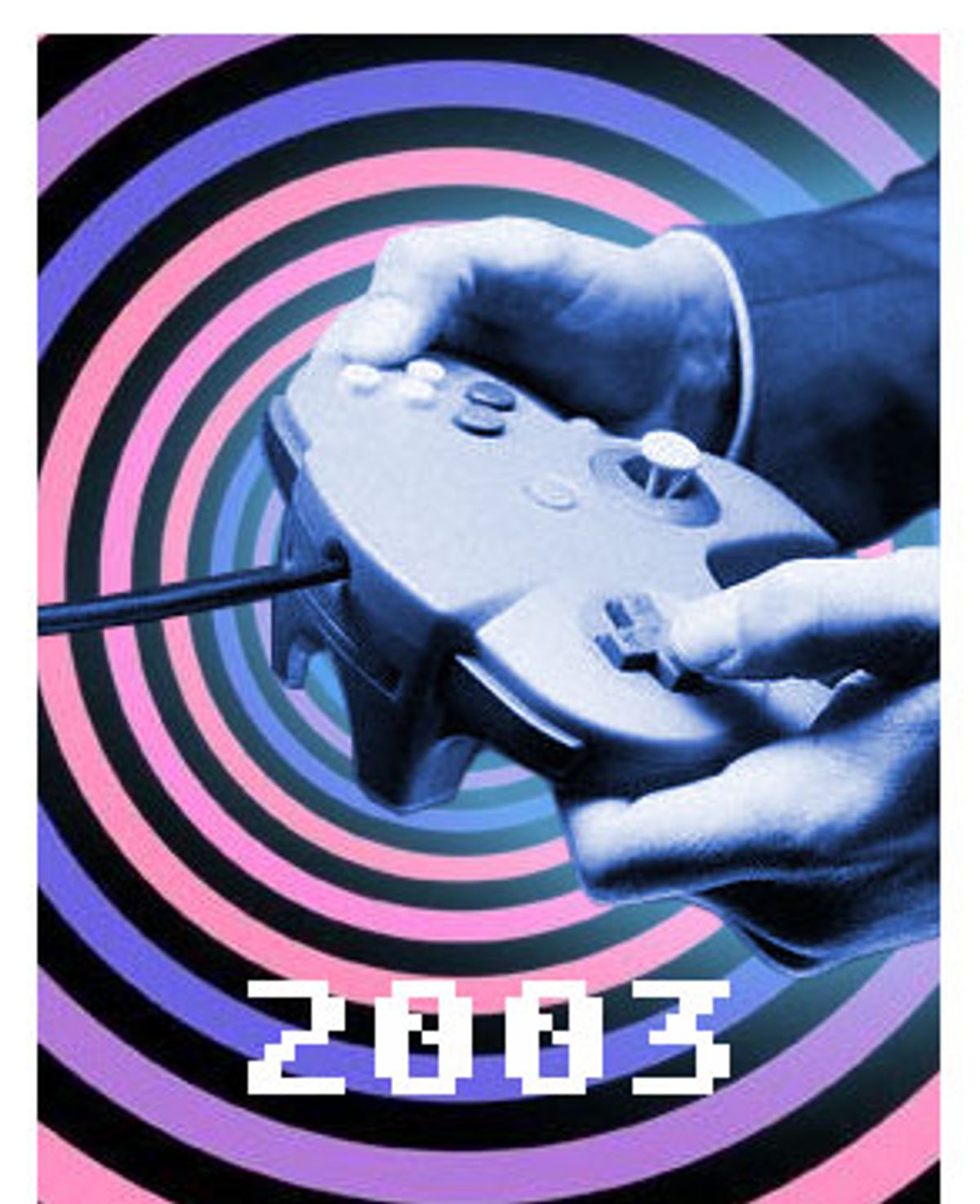 The Entertainment Software Association reports that the average gamer is now 28 years old, and maybe that's part of the problem: We are not so easily distracted by shiny pretty things anymore. But how to resolve the contradiction that where some find ennui others wait with bated breath?

Jason Zada, gamer and designer, writes on his blog, "Video gamers should be extra happy this Holiday season. The quality and amount of video games that are coming out are pretty impressive." At the same time, Steve Bowler writes on the group blog I maintain, "I've purchased three games this past month, and although they all please in the average sense, nothing is blowing me away. I can't get past the negatives, nor the lack of anything truly innovative."

So which is it, as we look back on the past year? Are we condemned to nothing besides genre retreads and sequels or is there an avalanche of great games just waiting to be found? As usual, the answer is "both" -- we're just not hearing about the good stuff.

You hear about what is hyped, and the hype is built up around all the safe bets in the industry. The surefire hit, the Bruckheimer production of the game world, gets all the cash and glitz. The result is that the bulk of current games speak to the same old audience -- the guys (and they are almost all guys) who loved "Halo," "Half-Life," and "Deus Ex." Good, solid games, perhaps, but yet again, 2003 was another year in which gaming failed to break out of the gamer ghetto. The anticipated online gaming revolution never happened. Sales of key games -- like the buzz-worthy "Prince of Persia" -- are sluggish. Is it gamer malaise? Market fatigue? Too much rehash of the same old, same old?

Maybe we should look a little further, stand up from our keyboards and joysticks and peer into the distance. Out on the fringe wait the odd little games. The offbeat, the wacky, the strange games are available, but they're hiding under piles of overstocked "Tomb Raider."

Sure, most of these games won't sell more than 20 units; many of them will remain in France or in Japan and never be ported to North America. Most gamers may not even hear about them. But some of them will spark tiny trends and slowly carve out new niches in overcrowded genres. Some of them will pull gamers out of their chairs and back into their own bodies -- as disconcerting as that may sound to the true geek. And some of them will achieve what so many have tried and failed to do so far: They will bring new fans to gaming, non-hardcore gamer fans, especially the sought-after, ever-elusive female gamer.

Game developers have been scratching their heads over the woman-gamer question for several years now. Freud's somewhat flippant question just won't go away: "What do women want?"

There are in fact a lot of women playing Web-based games online, on sites like Electronic Arts' pogo.com or Microsoft's zone.com. Virtual world community There.com also claims that over 60 percent of its player base is female -- and comparable numbers are cited for "Arkadium" and "The Sims Online" -- all online games requiring fairly high levels of social skills.

But the wave of high-profile, massively multiplayer role-playing games that debuted this year was supposed to bring in unprecedented numbers of female gamers, and that just didn't happen. Neither of the most-anticipated online games, "The Sims Online" and "Star Wars Galaxies," did anywhere near as well as expected. People signed on and quit when the games didn't fulfill their expectations. Did they launch too early, with not enough features? Did people just run out of time or money? Were women uninterested?

Some observers think too much is being made of the supposedly bad showing by the marquee games. "I think any perceived failure is probably just hype fatigue," says Julian Dibbell, author of "My Tiny Life," an account of Dibbell's adventures in an early online role-playing game. "True, massively multiplayer online games don't seem to have taken over the world's leisure life the way the approach of TSO and SWG led some people to expect, and I guess that's a sort of a failure. [But] the total number just keeps growing -- Final Fantasy XI just added 300K to the mix with no appreciable drop-off in other games' numbers."

It's possible that as the multiplayer online space slowly grows, it will be populated by more and more women. But mainstream console games -- the big moneymakers in the business -- fail again and again to attract significant numbers of female players. One obvious factor is the lack of female influence in the highest echelons of game development and design. There are a handful, but they are not yet enough to balance out the boy culture that still rules nearly every aspect of video game design, development, publishing and promoting.

Girls do want to play games. Lifelong gamer Souris Hong-Porretta says she has simple requirements for what she wants to play: "Good game play, something that can be picked up by either sex and is fun to play is good enough for me."

But the advertisers aren't looking for her. Robin Hunicke, a gamer-geek-girl getting her Ph.D. in computer science at Northwestern University has been studying video games -- formally and casually -- for most of her life. "Most advertised games tend to fall into the shooter and sports categories," she noted. "I think it's a marketing problem. It certainly promotes the conventional-wisdom stereotypes about games and gamers."

And as far as games that directly target women go, many girl gamers and gaming women express outright horror at the idea of the Barbified games.

"It's tricky because if the developers think about games for women, most are tied to a publisher who would have some heavy market research saying we needed things like pink and ponies," explained Hong-Porretta.

She knows what she's talking about: Hong-Porretta recently co-founded the independent game development studio Invasiv in New York. She personally doesn't care much for ponies and pink. She would rather play "Counter-Strike" than "Lizzy McGuire: On the Go!"

But there is innovation to be found -- games that are not gender-stereotyped and exciting. The coolest thing I've seen this year is a Playstation2 peripheral that is selling steadily on word of mouth and spectacular in-store demos. The EyeToy nearly caused a riot at the Tokyo Game Show this fall. It's insanely and infectiously fun, and you don't need to know anything about games to get why it is utterly engrossing.

The EyeToy is a camera that sits on top of your television and projects your image onto the screen. You are then able to interact with onscreen elements, like karate-chopping targets in a game such as "Kung Foo" or hitting all the onscreen bubbles in the right order in the funky dance game "Groove."

EyeToy suggests a new era of interactivity, one that increasingly looks like the movement-based control scheme Steven Spielberg designed for Tom Cruise in "Minority Report."

"I think the reason it's compelling is obvious," says Jim Greer, a programmer and gamer. "It takes video games out of the thumbs and uses the whole body. The whole geekiness of games -- there are multiple components -- but one element is that it's a rather tight, enclosed, compressed, cerebral experience. [EyeToy] takes video games off the couch and the armchair. It's the difference between typing and dancing."

Musical games are not new. In 1997, the boutique game studio NanaOn-sha, headed by musician and producer Masaya Matsuura, scored a sleeper hit with the instantly accessible beat-matching game "Parappa the Rapper." "Frequency" and its sequel, "Amplitude," were more hardcore versions of the genre, featuring faster, harder beats. The gorgeous, blissed-out trance game "REZ" offered synesthesia for auteurs and artists.

The latest NanaOn-sha product is too Japanese to make it out of the island nation. But "Mojibribbon" is so unusual, and so compelling, and such a lovely little game that it deserves mention. It's a beat-matching game in which you write Japanese kana in calligraphy to the time of the rap. If you have too little ink on your brush, your script is light and scratchy; too much, and it's wet and blotchy. Pressure counts, too -- just enough on the analog stick will create perfect, clear characters. If you unlock Level 9, you can compose your own raps and send them as e-mail to your friends via the "Mojibribbon" network if you have the PS2 network adapter. You can also download the raps that other people have composed.

Dance games are probably more popular than simple beat-matching games. "Bust a Groove" and "Dance Dance Revolution" mapped the moves to music, requiring the player to perform the supafly combos on giant dance pads. Hardcore gamers don't like the genre, typically, because it forces them to do something they probably haven't done since they were forced to do the Hustle in seventh-grade gym class: get up and get jiggy. At DDR tournaments, lithe kids sweat their way through impossible configurations of foot and hand movements, the best ones perfectly choreographed and synced with a partner. It's a jaw-dropping feat of turbo-powered grace. The home version continues to be popular, with new songs and remixes coming out every year.

Games that involve the body in its totality, like DDR and games for the EyeToy, and games that are musically tied to the action are manifestly not geeky. Geeks use their heads; non-geeks use their bodies.

But getting non-geeky may be the key to getting games out of the hardcore ghetto and really attracting women in large numbers. Getting funky shaking the maracas to "Samba de Amigo" or wailing on little plastic taiko drums is just plain fun. These games go a long way toward dispelling the image of gaming as a solitary, bloodthirsty sport of young males sniping at each other over the Internet. These games have an instant, intuitive appeal -- you get the point of them in seconds, and the fun factor is effortless. And the replay value is huge -- at least, until you develop a leg cramp.

Put the body together with interaction with other people, and you've got a world of potential.

"I like the social aspect of gaming," says Souris Hong-Porretta. I like games that involve more than just me."

The first home entertainment system, the Magnavox Odyssey, hit the market in 1972, one year before I was born. Video games and gamers are mature 30-year-olds now. We're ready to move beyond games as nicely packaged, salable consumer products. We're ready for cultural products. Good, bad, and ugly games. Experimental games. Games that are not entirely successful but try out a new idea or a new technology. Games that are more than just games. We're getting there. And for all the love of video gaming that gamers still bear, that seed of discontent is just what's needed to keep looking for the next great thing that breaks boundaries, wakes people up and rocks the world.