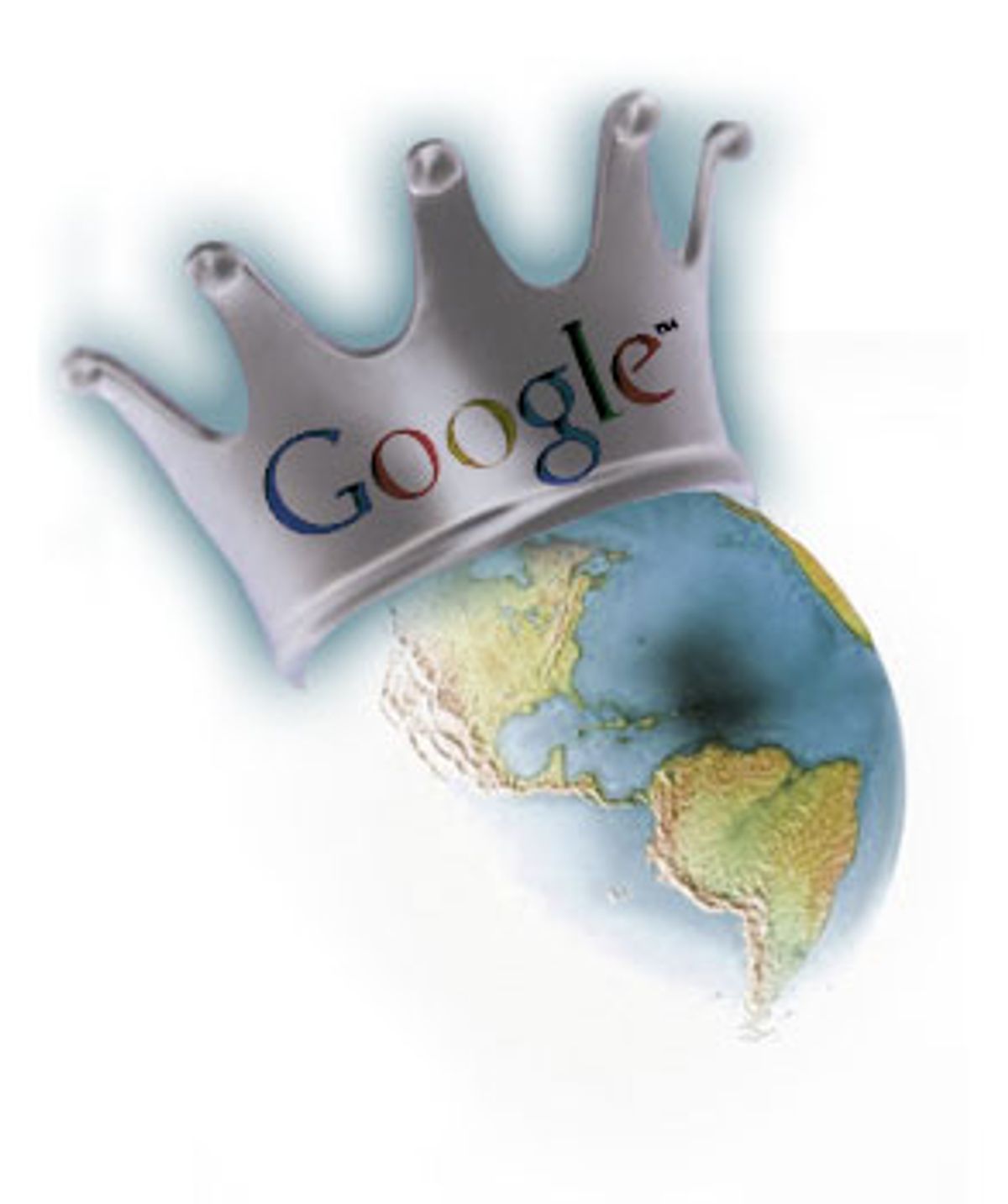 Google ends months of fevered speculation regarding its IPO plans by announcing that, instead of a stock offering, executives have decided that the company will best achieve "increased long-term asset valuation" by taking over the world.

"We hear that some know-it-all tech pundits are calling us 'too powerful,'" Sergey Brin, Google's co-founder, says at a press conference that mysteriously pops up on every TV channel. "We looked into it, and you know what? They're right! We are powerful!"

To conquer the world, Google abandons its prized PageRank search algorithm and begins routing Web traffic according to a new program called However We Damned Well Please, OK? Search on "president" and you see Google's choice for leader of the free world. Type in "bookstore" and you are routed to Google's own bookstore, which sells only titles that conform to the company's ideology, Googlism. What is Googlism? It's a state of mind, it's a way of life, it's a worldview that emphasizes math, clean living and Linux, and prohibits all references to alternative search engines or, really, any alternatives to the idea that Google is all you have to live for. Remember, Google is watching you.

As medical studies have proved, millions of men who were unable to satisfy their needy women before the advent of the Internet have been helped by the various sexual remedies peddled over e-mail. In 2004, those sales reach a tipping point -- thanks to spam, so many men grow so long and so hard that the market for online pornography (which consists largely of men who are, in the words of one e-mail, "built like a mosquito") free-falls. Instead of lusting after virtual women on a pay-by-the-month basis, men with new and improved bodies flock to Internet dating sites and lust after women who are real (even if their pictures have been retouched a bit in Photoshop -- nobody's perfect!). Millions of happy, loving and extremely sexually satisfied couples form lasting unions, and online smut peddlers have no choice but to close down their Internet filth shops and begin doing something more wholesome, like selling the penis patch.

In a related development, a formula to end hair loss, enhance male genitalia, and cause instant weight loss is discovered by researchers at Harvard Medical School. But no one believes it. Worn down by the heartbreaking false promises of millions of spam e-mails, American men ignore the news of the real miracle. The start-up marketing the all-in-one solution for baldness, small penises and potbellies will go out of business before the end of the year.

The parents of an obese 11-year-old girl in Port Aransas, Texas, sue the National Pork Board, charging that their daughter developed a daily bacon habit after surfing the Pork4Kids Web site.

"We have software on our home computer to protect Brenda from pornography and pedophiles on the Internet. But we had no idea that this kind of corporate filth was out there targeting her, too," the girl's father tells reporters, after being awarded $13 million and copies of "Charlotte's Web" and "Lord of the Flies" from a sympathetic jury. The Center for Consumer Freedom issues an incensed statement arguing that the National Pork Board has a God-given constitutional right to urge kids to "go hog wild."

"It's not easy living in a cave," Osama bin Laden explains to U.S. interrogators moments after he's captured early in 2004. "You might learn to put up with the cold, the bugs, the lumpy bed, but it's the social life that hurts the most. So you go online for a few hours to keep up with your friends. Where's the harm in that?"

But Friendster, the popular online social networking tool, proves to be OBL's undoing. Through a series of unlikely relationships -- which folks like Michael Moore have long been whining about but which were not quite clear until Friendster graphically demonstrated them -- George W. Bush turns out to be connected to bin Laden.

See, Bush knows this guy (an acquaintance, not a friend) from his DKE days, and this guy's wife has a sister who knows this dude with great hair who once, when he was young and very drunk, spent the night with this woman who is a huge fan of the MTV show "Cribs."

Small world! Bin Laden's second wife also loves "Cribs"! FBI investigators, who now routinely use Friendster in their searches for terrorists, piece together these connections and hit the jackpot -- Osama bin Laden's profile complete with an e-mail address, OBLbKickin@aol.com. Investigators initiate a virtual romance with the terrorist leader, and he invites what he believes to be his virtual paramour up to the cave for drinks. Sadly, none of OBL's 49 Friendster friends -- although many give him glowing testimonials on the Internet -- spring to his defense in the real world.

After more than a year of searching through company documents and persuading dozens of mid-level execs to testify against senior management, the Justice Department declares that Enron, on second thought, didn't do anything wrong.

"The whole thing was a big misunderstanding," John Ashcroft tells reporters. "Our bad." Enron's managers weren't really stealing millions and hiding their actions through deceptive accounting practices, Ashcroft explains; the company's transactions were just so mathematically intricate that the media and government investigators were too dumb to understand them.

What about the shredded documents? "I told you -- just trying to save money on firewood!" an angry Ken Lay, Enron's former CEO, tells stupefied reporters. "You guys really loused this one up. Good one."

The Power of One

In a noble effort to do his part to contribute to the U.S. economy's jobless recovery, CEO Larry Ellison orders that all non-core jobs at Oracle Corp. be outsourced, offshored and otherwise globalized. After workers at the company's Redwood Shores offices train their replacements in the Third World (who work for 1/20th of their salaries), there is only one U.S.-based Oracle employee left: Larry Ellison.

The Smoking Gun uncovers documents proving that the Earth Liberation Front, the shadowy environmental group linked to the torching of several Southern California Hummer dealerships is actually funded by oil-industry money. Apparently, the petroleum-industrial complex funded the front group to try to smear the environmental movement and discredit the greenies' position on the human causes of global warming.

Snopes.com confirms the authenticity of photographs circulating on the Internet that show Dick Cheney wearing an E.L.F. cap while sipping snifters of brandy with oil execs. Attorney General John Ashcroft uses the PATRIOT Act to prosecute the vice president as a domestic terrorist and "make America safe for Americans."

But a spokesperson for ChevronTexacoMobilExxon chuckles at the accusation that the energy industry is trying to make itself look bad. "Don't be ridiculous -- that's like saying PETA is a front for the mink fur industry."

The assembled reporters gasp, then rush for the exits.