MoveOn's contest to come up with the best Beat Bush ad campaign produces some fire-breathing doozies -- and the Democrats should pay attention. 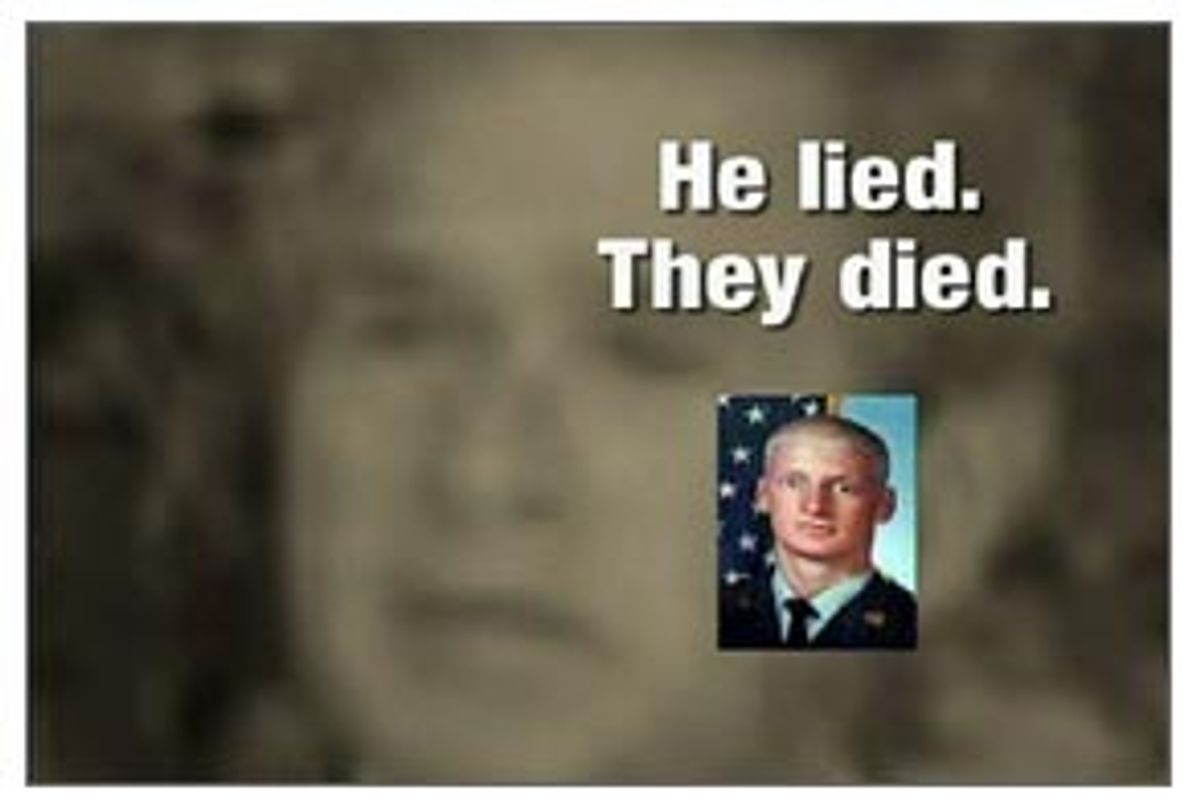 The opportunistic flapdoodle that Republican National Committee chairman Ed Gillespie has made of the two Bush/Hitler comparisons on the left political-action group MoveOn's Web site is a slyly convenient ploy. If Gillespie can convince the media that the ads, two of more than 1,500 submitted as part of MoveOn's "Bush in 30 Seconds" ad campaign contest, are typical of all the responses, he'll be able to divert attention from other, first-rate entries.

The 15 finalists chosen by MoveOn show more wit and finesse than that dum-dum equation. They range from the gibes of some world-class smartasses to the accusations of the outraged to heavy-handed speechifying to 30-second elegies for a country gone horribly wrong. [To view any of the ads, click here.] Among the wittiest of the lot is David Haynes' "Desktop," in which we see a computer screen bearing the presidential seal and file folders labeled "The Economy," "Civil Liberties," etc., being dragged into the trash. The legend "What's Next?" is the capper. Just as good is Andrew Boyd's "Leave No Billionaire Behind," in which a bunch of preschoolers break open their piggy banks and hand over the cash to a corporate exec sitting at a kiddie-size table.

Kids are also featured in "What Are We Teaching Our Children?" in which a school debate becomes a parody of a stump speech (among other campaign promises, the contestants pledge to question the patriotism of anyone who questions them), and most effectively in Charlie Fisher's "Child's Pay." Beautifully shot and striking just the right degree of irony, the ad shows kids working as dishwashers, janitors, garbagemen and assembly line workers, leading up to the legend, "Guess Who's Going to Pay for President Bush's $1 Trillion Deficit?"

I could have done without Mark Vicente's "Imagine," which rehashes strident clichés about the war being fought entirely at the behest of corporations -- one of the biggest obstacles to getting Bush out of office would be an assumption that, despite the lies, he doesn't mean what he says. And though the idea of Outpost 7's "In My Country" is unobjectionable (a man of Middle Eastern descent talks about the oppressions in his country, which turns out to be -- surprise! -- the United States), the execution is annoyingly heavy-handed.

The lies Bush told in his State of the Union address are the taking-off point for some of the most successful attacks, like Adam Feinstein and Rich Garella's "Polygraph," in which -- as we hear the claims that Saddam sought uranium in Africa -- a lie detector goes off the charts. And then there is Mike Cuenca's devastating "Bring 'Em On," in which the same clips heard during "Polygraph" are seen coming out of Bush's mouth while, in the lower right-hand portion of the screen, a montage flies by of American soldiers killed in Iraq. "He lied. They died" is the dead-perfect kicker.

For all the Republican ire any of these spots would raise if they made their way onto TV, the Democrats would be unwise to ignore their effectiveness. If the candidates collectively, or the nominee after he is chosen in July, cannot match the bluntness of these ads, if he decides to take the high road (that is, wuss out), then the party is going to find itself alienating the very people who constitute one of the strongest forces that might gather to defeat Bush. If I were Howard Dean or Wesley Clark, the impact and economy of these ads would make me think twice before I shelled out big bucks to some media professionals. If a contest for ads can solicit this response, and if the best can be so effective, whoever the Democratic candidate is has an ad army waiting to be ordered into combat.