Two online entries out of hundreds in MoveOn's TV-spot contest compared Bush to Hitler, and Republicans cry "hate speech." But they're the ones who are twisting the truth. 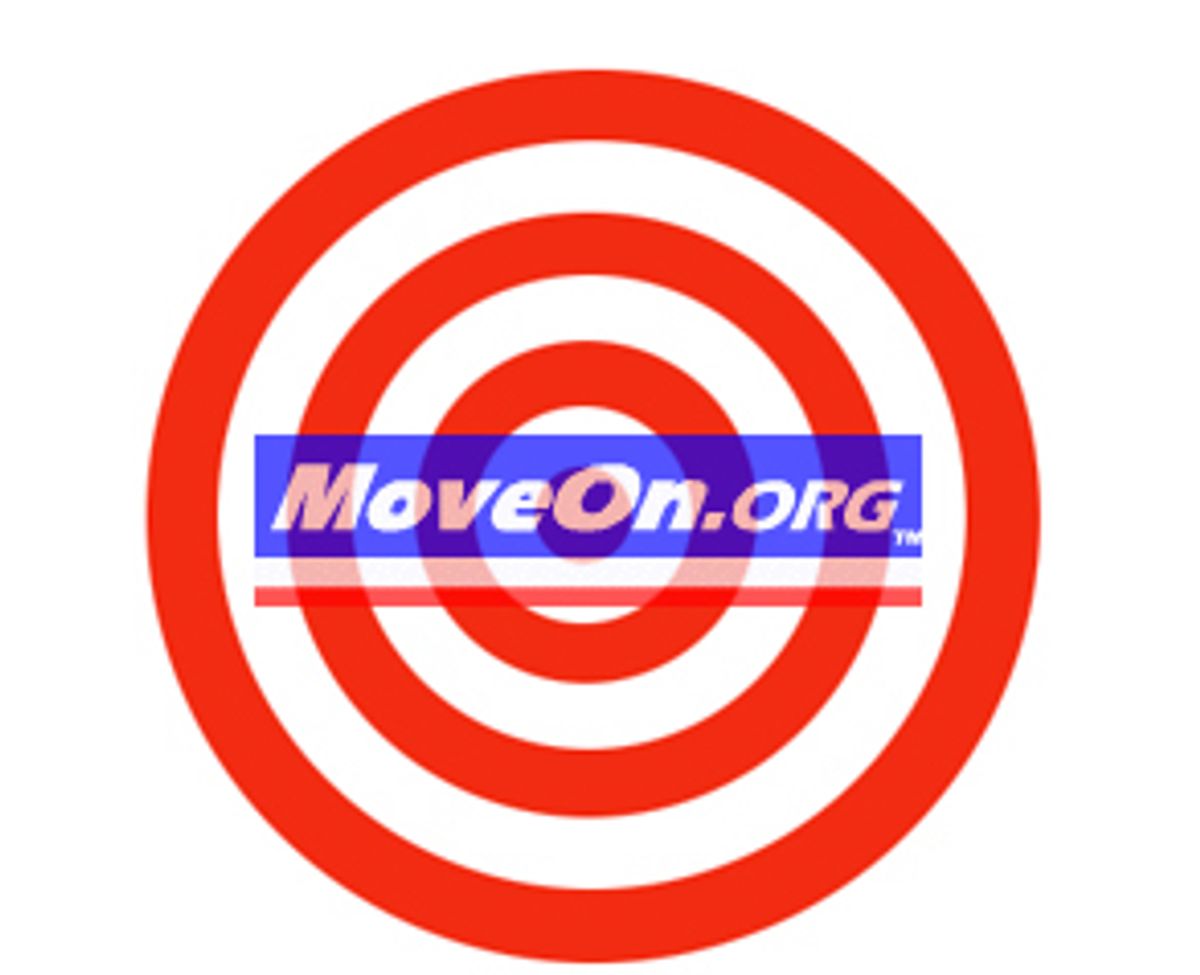 The Iowa caucuses are still 12 days away, not a single Democratic voter has cast a presidential primary ballot, but already the outlines of the 2004 campaign are clear: The Democratic nominee, whoever he is, will be depicted as soft on Saddam Hussein and Osama bin Laden by GOP hatchetfolk, while the Bush campaign and its media echo chamber insist it's Democrats who represent the party of hate. Got it?

That's why the MoveOn.org flap this week is a good warm-up for the ugly battle to come. Everybody who follows national politics knows the story line by now: MoveOn stands accused, by the Republican National Committee, Matt Drudge and the Wall Street Journal Op-Ed page, of sponsoring television ads comparing George W. Bush to Hitler. Following the Republican "revelation" of MoveOn's political perfidy, some Jewish leaders denounced the ads for belittling the Holocaust by comparing our president to the man who murdered 6 million Jews. The moral of the story: Bush's opponents are crazy, vicious haters who'll do anything to disparage him, even disrespect the memory of the victims of Nazi horror.

Another day, another big Republican lie.

In fact, as those who've followed the story know, MoveOn didn't sponsor or create, let alone televise, ads comparing Bush to Hitler. MoveOn's issue-advertising arm, the MoveOn Voter Fund, ran an innovative contest, "Bush in 30 Seconds," challenging its members to make their own political ads illustrating the shortcomings of the Bush administration in a humorous, creative way. (The contest winner will have his or her ad nationally televised by the Voter Fund.) The online advocacy group got more than 1,000 ad submissions, and posted the vast majority on its Web site. Its network of more than 2 million activists was eligible to vote to narrow the field to 15 finalists, and selected them this week; a celebrity panel will pick a winner, to be announced Jan. 12. Both Hitler ad submissions scored poorly with MoveOn supporters, and would have been consigned to history without the publicity boost from the RNC. (Now, ironically, the only place you can find them is on the RNC's Web site.)

As I watched the controversy unfold, I winced for MoveOn. The grass-roots cyber-upstart, founded to protest Clinton-impeachment madness, has become a crucial channel for smart liberal opposition to Bush policies on the war and the economy, a welcome alternative to the craziness of International ANSWER and the willful marginality of Green Party dreamers. MoveOn is decidedly not part of the Bush-is-Hitler loony left. But it has become a target of the vast right-wing lie machine precisely because of its sanity and effectiveness, which in turn drew the attention and funding of liberal donors like George Soros and Peter Lewis, which in turn drew MoveOn even more right-wing vitriol. Bill O'Reilly and Tom DeLay regularly inveigh against it, and I've been watching with a little trepidation to see how MoveOn -- still led by Berkeley, Calif.-based founders Wes Boyd and Joan Blades and a small team of colleagues -- would handle the big time.

Judged on the basis of the Hitler ad flap, I'd say they're handling it imperfectly, but admirably, and they'll be just fine. MoveOn political director Eli Pariser quickly denied the RNC slur that the group had sponsored the ads, pointing out the facts: that they were posted to the site as part of a contest, and never received MoveOn's imprimatur. But he also said that the group "regrets the appearance" of the Hitler ads on its Web site, and promised that in the future, MoveOn would have a better process for vetting member-generated political content. For MoveOn enemies, Pariser's statement was too little, too late, but I thought it was just right.

Reached at their Berkeley home Tuesday, Wes Boyd and Joan Blades acknowledged they should have taken more trouble to screen their supporter-created ads for content that could be exploited by their enemies. I was surprised by their candor about their RNC-sponsored learning experience. "We had a small committee running the contest," Boyd admitted, which included Pariser and rock star Moby. "We screened mostly for legal issues" -- there are limits to what the MoveOn Voter Fund's 527 status lets the group advocate politically -- "and we referred some questionable things to our lawyers. We decided to let our members decide [on content], and actually the process mostly worked really well. The good stuff rose to the top." The Hitler ads sank.

But with hindsight, given the group's new political prominence, Boyd says, "We should probably have had a content filter in the process. It's really tough when you're dealing with political speech, but we should have had one. But that's how it works. You learn, your sensitivity grows. We expressed regret, and that is real." Boyd said he'd spent the day talking to Jewish leaders who'd been offended by the ads, explaining the group's process and personally extending his apologies. "I think they've accepted our expressions of regret."

Blades acknowledged that she worried the flap could overshadow the creativity of the group's contest winners. "But I think the contest is just so cool -- the ads that were chosen are just so powerful -- that it will do what it was meant to do. Look, this 'gotcha politics' that's practiced now causes a lot of people to be afraid of getting involved. Our end goal is bringing new people into democracy, and we're achieving that. We're flexible enough to learn along the way. So we're going, 'OK, we have to be prepared to put in place ways of making sure that stuff that shouldn't get through doesn't get through, whenever we do things like this.' "

And so MoveOn moves on. Its enemies won't, of course. That's why it's important that the group admitted it stumbled, a little, by ducking the admittedly tough task of vetting the ads for content before posting them to the site, and that it says it learned from the mistake. Of course, the RNC didn't apologize when Republicans ran ads that turned disabled veteran Sen. Max Cleland into Osama bin Laden, or Senate Minority Leader Tom Daschle into Saddam Hussein. RNC chair Ed Gillespie hasn't yet demanded an apology from columnist Ralph Peters for his Monday New York Post Op-Ed comparing Howard Dean to Hitler. And he never will. Republicans smear without apology. And sadly, they mostly get away with it.

Meanwhile, on the more genteel Op-Ed page of the New York Times, GOP apologist David Brooks got away with a genteel kind of smear Tuesday, suggesting that critics of the powerful neoconservative movement are A) crazy, because there really isn't a powerful neoconservative movement, and B) anti-Semitic, because to the extent that there is a neoconservative movement (which isn't powerful at all, by the way), it's made up of Jews. Brooks didn't say "crazy," and he didn't say "anti-Semitic," but both slurs kind of hovered in the piece, and in his smooth way Brooks practiced a version of the dishonest political thuggery Ed Gillespie used against MoveOn: calmly inject a political falsehood into the debate -- in Brooks' case, that there's no neoconservative elite peddling a foreign policy vision that led to the Iraq war, and that those who say there is one are paranoid and anti-Semitic -- and then keep repeating it, with confidence that the mainstream media will either be hypnotized or intimidated into repeating the slur as truth.

That's Campaign 2004, and MoveOn will do well if it learns from this week's experience not to give its enemies ammunition. But other liberals should learn from MoveOn: The group admitted its mistake and expressed regret. Its leaders publicly shared what they learned from their experiment, and what they thought it meant about American democracy. And then they riled up their base to fight the Republican lies, sending out e-mail alerts exhorting supporters to take issue with the way the media has repeated the RNC slur as fact. MoveOn could come out of this mess stronger than before.

"This is why we have the politics we have, these sterile campaigns -- nobody will take chances, nobody wants to make a mistake," says Boyd wryly. "Mistakes are what get you fired in politics. Well, we made a mistake, and nobody's getting fired. We're learning. We're listening to our base. That's what too many organizations don't do: learn from or listen to their base."