Mandy Moore plays a presidential daughter itching for freedom. Why won't Hollywood give the talented Moore a little bit of her own? 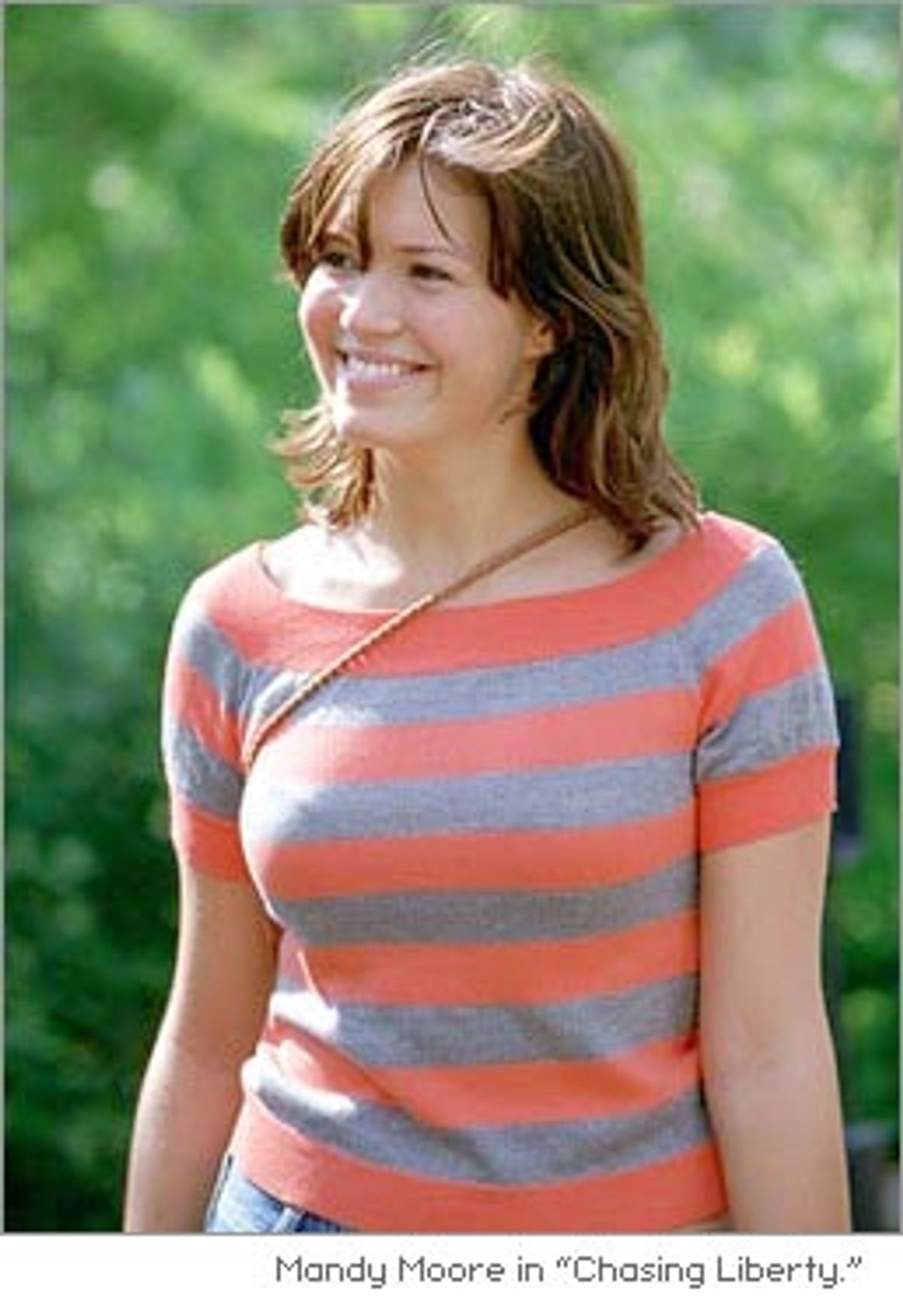 "Chasing Liberty" doesn't do Mandy Moore any favors. Moore has been trying to break out of her saccharine pop-star image and in the past year two things have gone some way to doing just that. Her instinctive, uningratiating performance in the sweet teen movie "How to Deal" showed a flair for the type of flinty sarcasm that gets you on a character's side. And the surprisingly deep voice Moore shows off on her album "Coverage," as well as the taste she demonstrates in her selection of '70s and '80s pop songs, made it one of the year's best pop albums.

How disappointing then that in "Chasing Liberty" she's been directed to alternately chirp and pout. "Chasing Liberty" is the kind of bland, perky comedy that neuters whoever is spun into its cotton-candy web. (It doesn't help that in the first scenes, Moore is costumed to look as if she's the poster girl for Talbot's.) If Elvis couldn't prevail in these sorts of movies, Mandy Moore surely can't. "Chasing Liberty" made me feel like I was a kid passing a Sunday afternoon by watching "It Happened at The World's Fair" on television.

The script, by Derek Guiley and David Schneiderman, is a gloss on "Roman Holiday," with Moore playing the president's daughter who eludes her Secret Service handlers on a trip to Europe for a taste of freedom. In "Roman Holiday" Audrey Hepburn was aided by Gregory Peck as a reporter angling for an exclusive on a princess's spree. Moore's accomplice (Matthew Goode) is, unbeknownst to her, a Secret Service agent posing as a photographer motor biking through Europe. He's been given the assignment by the president (Mark Harmon) who wants to make sure that even this bit of his daughter's freedom is managed.

By itself that's not a bad idea for a comedy -- especially a teen comedy. All teenagers feel constrained and infantilized by their parents. Who better for them to identify with than a girl who can't go on a date without the Secret Service conducting surveillance from a FedEx truck parked outside? And Moore is certainly adorable enough to watch in a romantic escapade.

The trouble is that director Andy Cadiff, a veteran of sitcoms like "Home Improvement" (his previous feature was the big-screen version of "Leave it to Beaver"), has directed Moore to telegraph that she's adorable. Scene after scene is shot largely in close-ups so that the postcard shots of Berlin, Prague and Venice, even when populated by the leads, feel like establishing shots done by the second unit. Cadiff and the screenwriters keep things as nicey-nice as possible so that the off-kilter elements -- a club performance by the Roots; Moore's friend, the French ambassador's daughter (the lively Beatrice Rosen) explaining to Harmon just what her tongue piercing is for -- feel as if they'd strayed in from another movie. And when something does threaten to disrupt the family-friendly tone, a scene where Moore and Goode pose as newlyweds and have to share a bedroom, it's in the sunny, faintly smirky tone of a Doris Day picture. It doesn't help at all that her love interest is the smooth-voiced bore Matthew Goode. In "Master and Commander," Russell Crowe plays a hero from the age of Lord Nelson. Goode couldn't play that sort of role, but he's stiff enough to be cast as Nelson's column.

The only things approaching romance in the movie are the scenes with Jeremy Piven and Annabella Sciorra as the Secret Service agents trying to catch up with Moore and Goode. Their material is third-rate at best but their sparring has at least a few meager sparks and shows the understanding of the romantic-comedy formula that matches are made from people who keep butting heads. Every time the movie cut to them, I wished it stayed there.

"Chasing Liberty" is forgettable fluff but it left me in an unaccountably bad mood, mainly because it's a step back for Mandy Moore. She's no actress, but it's easy to believe her charm (and the flippancy she showed in "How to Deal") could be harnessed to make her an appealing screen presence. She's not going to get that chance, though, if she keeps making fake movies with fake directors. Is any director with talent and a feel for directing actors willing to give Moore that opportunity? (The looks of disbelief I've gotten when suggesting people listen to "Coverage" says a lot about how hard it is to challenge a perceived image.) Sometimes in movies, the difference between bad taste and good taste simply has to do with people willing to take a chance.