Why am I a strong believer in intermarriage? Because too much Jewish angst, WASPY stoicism or Catholic repression in one household isn't healthy. 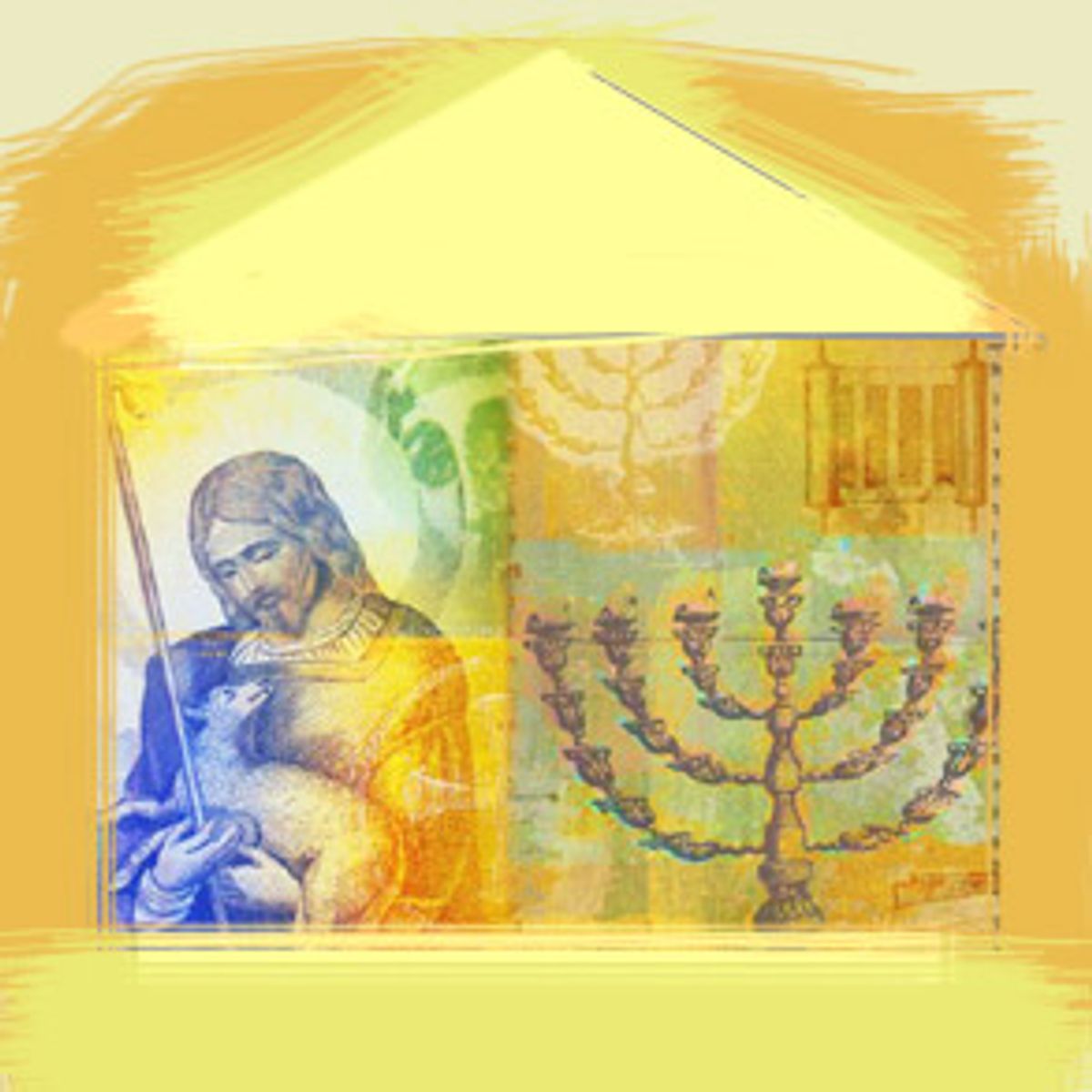 A few weeks ago I did something I haven't done in years: I went out with a Jewish guy.

This was a big deal, as my last intratribal relationship was in 1994, and that was a disaster. He was, in no particular order, whiny, angst-ridden, afraid of his stove, and hairy in all the wrong places. He found me, in turn, charming, adorable and nuts. We were a terrible match, but we stayed together for a while because it seemed like we should. We were both writers, we were both Jewish; clearly, we were supposed to be miserable.

Since then, I've avoided Jewish men like locusts, frogs and boils. The last place you'll find me, for example, is on online Jewish singles sites like JDate or JCupid. My worst relationships have been with Jewish men; they're too familiar -- and not in a good way. They're argumentative and contentious, which I tend to be. The writer and I picked at each other mercilessly: He didn't like the sound my clogs made in his apartment. I didn't like that he checked the stove five times to make sure it was really off. He wanted me to kick in for the heating bill, even though we weren't living together. I thought he should try to be less, er, frugal. Our disagreements may have had nothing to do with our backgrounds, but he pushed a lot of buttons that only someone with a similar upbringing could touch.

I grew up in a family that was not afraid to voice its opinions. When we had a complaint, we let it out. Loudly. My parents adored their three kids and consequently critiqued just about everything but our bowel movements. Do I want my husband doing that? No. And while I get terribly frustrated by people who can't talk about their emotions, sometimes you don't want to analyze and dissect ad nauseam. Sometimes you just have to shut up.

Of course, I am stereotyping; not all Jews are critical and mouthy. In fact, some of my best friends are Jewish. I just don't want to marry them. I know plenty of people who feel completely different than I do: They believe it's easier to have a relationship with someone who shares a similar background, who knows, say, what kind of fish is a gefilte. To them I say, "L'Chaim!" But frankly, I've never wanted to make my world that small. Yes, it would be nice to have someone to eat Chinese food with on Christmas Eve, but the potential for antagonism isn't worth the moo shoo pork.

Which is precisely why I'm a firm proponent of interfaith marriage -- or, at least, not at all against it. And apparently I am not alone. A recent report, the National Jewish Population Survey, found that from 1980 to 1984, 38 percent of all Jews in the United States married outside the faith. The number increased to 43 percent from 1985 to 1990. By 2001, it was at 47 percent.

This study caused all sorts of discord in the Jewish community: The numbers were too low, too high, too inclusive, too exclusive. But what some Jews see as a crisis, I see as a blessing. We've wised up, we Jews. We've finally realized that too much Jewish angst in one household is not good. (Neither, for that matter, is too much WASPY stoicism or Catholic repression.)

Clearly, it's not just Jews who feel this way; if we're marrying outside our faith, other people are marrying outside theirs. We're all mixing things up, and it's only for the better. Think about it: Baptists like to suffer; Jews have suffered enough. For the kids' sake, wouldn't it be better to have at least one parent who isn't interested in unnecessary pain? Who doesn't think the Messiah has come and gone and that we are all doomed to hell -- or, conversely, that he is right around the corner?

"You're a self-loathing Jew!" my mother cried when I explained to her that I would never attend the Matzoh Ball, or any other Jewish singles event for that matter.

"No, I'm not," I told her. "I'm quite happy with myself; other Jews are the problem." I know what I'm talking about: I spent the first seven years of my life at a yeshiva. I didn't like the exclusivity, the sense of superiority, the arrogance born of being "chosen." I didn't like the constant haranguing about marrying within the faith that began in grade school: "Stay away from the goyim!" What if the person I fell in love with wasn't Jewish? Should I dump him in favor of a guy whose last name is Rabinowitz, even if I couldn't stand him?

"Look at all those Kennedy women," my mother pointed out. "They all want Jewish men!"

"Of course they do! They're not Jewish!"

The Kennedys aren't the only ones who have intermarried with abandon. From Woody Allen and Mia Farrow to Charlotte and Harry from "Sex and the City," men and women of different religious backgrounds -- whether famous, fictional or real -- have always fallen in love. Again, I think it's because familiarity often breeds contempt -- or at the very least, exasperation. Besides, coupling with someone who is different is more exciting, exotic even. Jewish women and non-Jewish men work because non-Jewish men know how to humor Jewish women. They are amused by our outspokenness and assertiveness; they like that we aren't shy. Jewish men want shiksas because they don't remind them of their overbearing mothers. They get worshipped but not smothered.

My friend Chandra, 29, a magazine editor in New York who was raised in Jeffersonville, Ind., is as Wonder Bread as they come. She was born Catholic, raised Lutheran and had never known (that is, biblically) a Jew until she moved to Manhattan. Tired of Match.com, she posted an ad on JDate, figuring she'd give the Hebrews a whirl. She announced right off the bat that she wasn't Jewish, but did anyone mind? Au contraire. The first week she was on she was bombarded with messages -- about 100 in three days. "If I log on at night and stay logged on while I'm out, I'll come back to find 30 messages and/or missed IMs waiting for me in the morning," she says. "Most of them say things like, 'I never really date Jewish girls anyway.'"

This does not remotely surprise Craig Zavielsky, 41, an I.T. expert from Long Island, N.Y. "Non-Jewish women appreciate me more for just being nice, in the same way non-Jewish men probably excite Jewish women more because they're more classically male and maybe not as nice," he says. "Jew-on-Jew romance is a bit incestuous, almost like you set up the relationship you had with your mother."

Those persistent stereotypes -- Jewish women who are bossy and opinionated and Jewish men who can't use a power drill to save their lives -- can actually be quite endearing to non-Jewish members of the opposite sex.

"When we got locked out of our apartment Jon wanted to call the locksmith," laughs Rebecca Bradshaw, 37, a non-Jewish marketing consultant from Minneapolis who married a Jewish man a few weeks ago. "I had him lift me up through the window. He's not interested in the car, including washing it. I come from a family of people who can fix things."

That said, she's not at all bothered that he doesn't own a tool belt. "I love the intellectual side of him and that we can talk about all kinds of things," says Bradshaw, who's actually converting to Judaism. "I like the fact that he doesn't go ice fishing and hunt deer; I can talk to him about clothes and politics and we will have an energetic conversation."

After my friend Cindy, 32, a graphic artist in New York, returned from a weekend away with her new Jewish beau, it occurred to her that she'd done all the cooking and cleaning. But she didn't mind. For her, the benefits of being with a menschy man outweighed her domestic efforts.

"Jewish men are less emotionally repressed," she says. "The ones I have dated come from these huggy, kissy Jewish families where love is expressed freely. Really, it comes down to the fact that I already have one emotionally repressed family; I don't need someone else's."

Of course, there are thorny issues associated with intermarriage. I know scores of interfaith couples who aren't sure how they want to raise their kids, whether they ought to join a church or a synagogue, or if Jesus should be a regular part of their lives or just an exclamation.

I'm certainly not advocating abandoning Judaism; I'm hoping the tribe expands and explodes and lives forever. I'm a big fan of conversion -- assuming you're doing it for the right reason and not to please someone's mother-in-law. If I marry a non-Jew, I want my kids to have some kind of Jewish identity, just as I would want them to have some kind of American identity if I raised them in Europe. I'd like to have a house filled with a smorgasbord of festivities: Let's play dreidel by the warm glow of the Christmas lights, with Buddha sprawled on the mantel and the Tao of Pooh on the bookshelf. "With intermarriage the kids will grow up in a household where it's accepted that neither religion is true," says Douglas Rushkoff, 42, the author of "Nothing Sacred," which examines how Judaism has been misconstrued over the last century. "And that's the most important thing."

"It used to be seen that difference was harder to transmit to our children; part of what people used to do was create sameness because that was seen as easier," says Debby Hirshman, until recently the executive director of the Jewish Community Center in New York, which has an array of interfaith programs for its members. "The healthiest society [is one where] people realize that differences can coexist and become a strengthening force within each of us."

I agree. And as my recent Jewish date will attest, it doesn't look like I'll be frolicking under a chuppah any time soon, anyway. He and I went out, we made small talk, we split the bill, I was unimpressed, and that was that. But the final nail in the mezuzah? I discovered that our parents live in the same condo complex in Florida. And the only thing worse than two Jews in a relationship is six.