Ben Stiller and Jennifer Aniston have absolutely no chemistry in this romantic comedy about an uptight germophobe who falls for a peasant-blouse-wearing ditz. 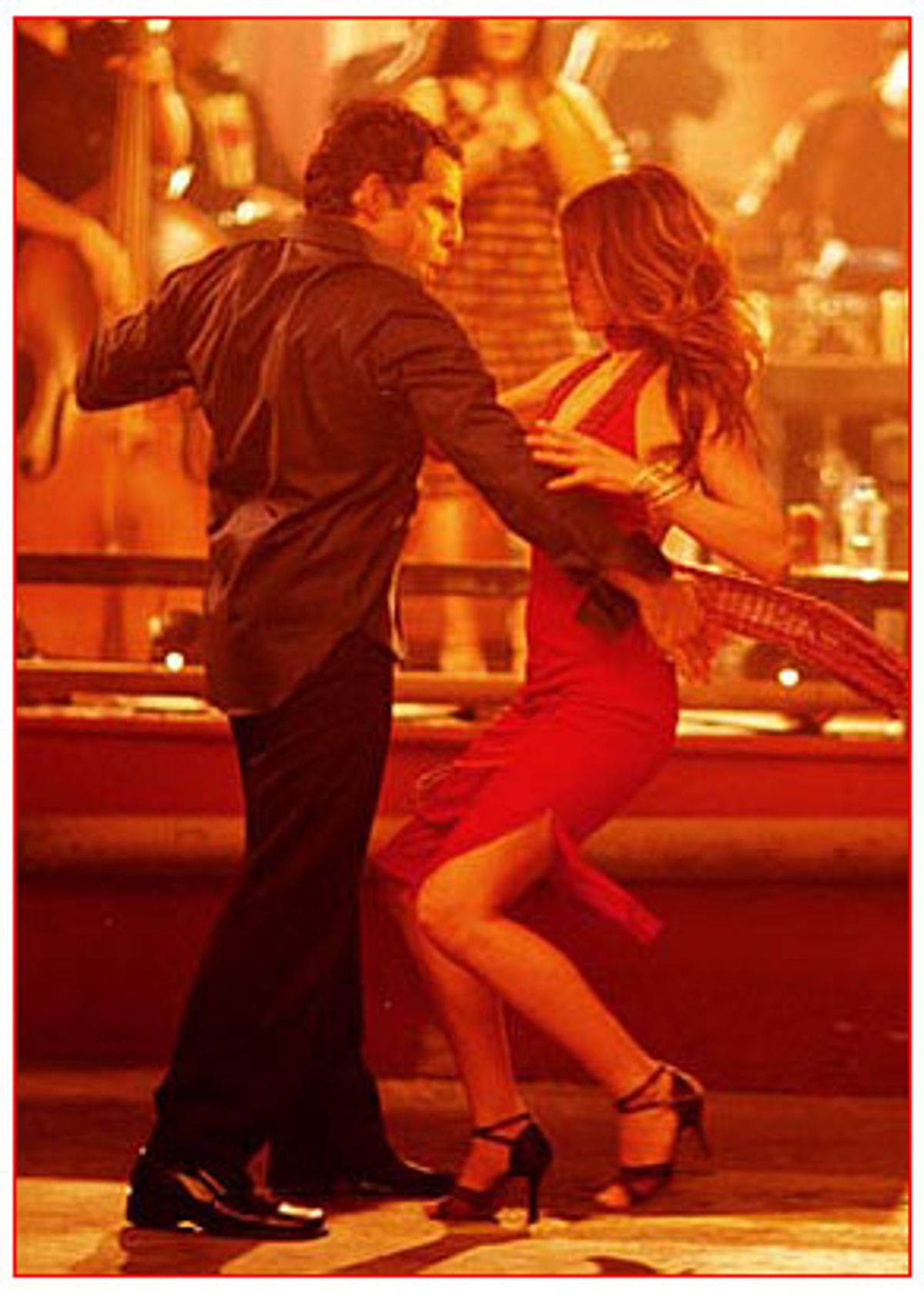 "Along Came Polly" is for everyone who's been waiting for a love story between an anal retentive and a flake. This latest nail in the coffin of American romantic comedy stars Ben Stiller as an insurance company risk assessor who, on the first day of his honeymoon, finds his new bride (the bright, bland Debra Messing, whose appeal eludes me) in flagrante with a French scuba instructor (Hank Azaria). Returning to his shattered life, Stiller runs into Polly (Jennifer Aniston), a free spirit he knows from junior high. Convinced that she's the girl for him, he sets out to win her, even though her lifestyle sends his meek, cautious nature into a tizzy. She flits from place to place and job to job. Her idea of a meal out is a night at a Moroccan restaurant -- which sends his irritable bowel syndrome into overdrive.

The writer-director is John Hamburg, who co-wrote "Meet the Parents." Broad as it was, the comedy of discomfort worked in that movie. I squirmed watching it, but I laughed. The formula in "Along Came Polly" has calcified into potty jokes -- Stiller has an embarrassment-on-the-toilet scene that's lifted from Jeff Daniels' similar scene in "Dumb & Dumber" without any of the explosiveness -- and "outrageous" gags like Aniston having a blind ferret for a pet. We're meant to find it hilarious when the animal keeps bashing his head into walls and doors.

This is the sort of movie where as talented an actor as Philip Seymour Hoffman (as Stiller's best friend, a former child star still trading on his fleeting fame) is used for fat-slob jokes. He makes his first appearance in his wedding tuxedo, his cummerbund clinging to his gut more perilously than Eva Marie Saint clung to Mt. Rushmore in "North by Northwest." The wonderful character actor Bob Dishy, as Stiller's dad, is stuck in the role of the henpecked Jewish husband who has learned to keep silent. His only lines are a sappy speech toward the end, where he delivers the lesson of the movie as if he were Doc in "West Side Story."

The only real laughs here come from Hank Azaria speaking pidgin Franglish (when he says "flesh and blood" it comes out as "flish and blued"); Azaria has a knack for the sort of foreign caricature that Erik Rhodes did in the Fred Astaire-Ginger Rogers musicals. And Alec Baldwin is amusingly coarse as Stiller's boss, a growly-voiced vulgarian whose wedding toast ends with him tossing off "mazel mazel, good t'ings" as if he were placing an order for a pastrami on rye and a cream soda.

As for the stars, there may be less chemistry between Stiller and Aniston than between any romantic pairing in recent memory. You never understand why these two people would be drawn to each other, and on their own, each character is so unappealing you wonder why we're expected to be drawn to either of them. Stiller is the type of guy who, when Aniston reaches for a bowl of bar nuts, can't resist lecturing her on all the unclean hands that have reached into the same bowl. Put it this way: If his character were forced at gunpoint to get a tattoo, he'd have "Employees Must Wash Hands" applied to his forehead. Stiller does some small, clever things, like tidily folding a straw wrapper up into a minuscule ball, but he's played this role enough already. I'm not sure what it says about Hollywood that a comic actor whose specialty is shifty, wiseass insincerity has become the favored regular putz of romantic comedy. It seems to indicate that the people who make mainstream movies are no longer interested in asking us to believe the scenarios they set up, even on a fantasy level.

I've usually liked Jennifer Aniston in the movies she's turned up in. She seems like a real person. As an actress, however, Aniston has not yet displayed a big enough personality to command the screen. She's never the cuddlebug you fear, but her glow is tiny. Aniston isn't unbearable here, but her character is. Polly is every cute, world-music-listening, peasant-blouse-wearing, Carlos Castaneda-reading, tofu-eating, indecisive ditz you've ever fled a blind date with (the cabala string dangling from her left wrist doesn't help). She's meant to be the kind of woman earlier romantic comedies referred to as a kook. But those kooks -- from Katharine Hepburn in "Bringing Up Baby" to Audrey Hepburn in "Breakfast at Tiffany's" to Melanie Griffith in "Something Wild" -- had a breathless style that beguiled the men on-screen even as they knocked them off balance.

As with those women, Aniston's appeal here seems meant to be that she frees the uptight male to take chances and live his life. Except that the way she frees Ben Stiller translates to stomachache, sexual humiliation and general indifference to his finicky ways. In the end he learns that all this discomfort signals that he loves her. At last -- a movie where love means diarrhea.