With its shocking realism, "Open Water" may be the perfect cross between "The Blair Witch Project" and "Jaws." 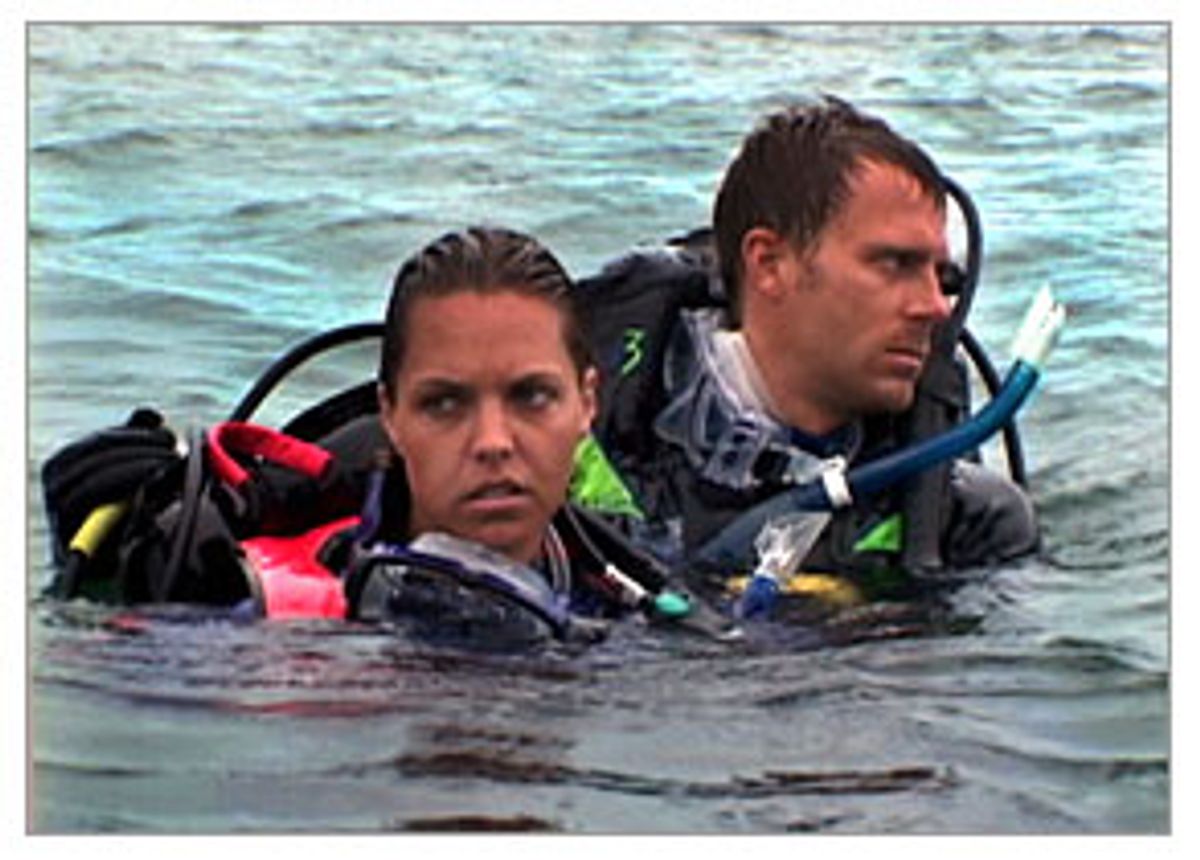 If you haven't rented "Jaws" or watched the Discovery Channel's "Shark Week" for a while, you might have conveniently forgotten about our friends the sharks, with their razor-sharp teeth and their curious little quirks. Enjoy this blissful lapse while you can, because director Chris Kentis is about to refresh your memory. The heart-stopping realism of his movie "Open Water" has the most reserved crowds at Sundance gasping and cringing in horror. Based on a true story of a vacationing couple scuba diving and abandoned in the middle of the ocean, "Open Water" has a straightforward style that pulls the viewer, kicking and screaming, into the narrative.

Aptly described as "Jaws" meets "The Blair Witch Project," the film somehow brings the horrors of sharks alive without special effects or expensive mechanical beasts. Yes, that means that the actors were actually in the water with real sharks. No, I wouldn't do that in a million years either, so I was excited to meet these insane individuals to learn what it's like to be surrounded by sharks while your producer throws bloody chum at your head.

How did you first hear about the true story that was the basis for "Open Water"?

Chris Kentis, director: I was aware of the story for a number of years before I did this, just as a vacation scuba diver. I first heard about it in dive circles and newsletters, and it really sent a chill down my spine. I was horrified by it, but never really thought about it in any other way. But then with the advent of Dogma 95, Lars Von Trier, Thomas Vinterberg and of course "Blair Witch" and those things, it became clear that you really could make a movie on this [digital] format and people are open to seeing it. I thought this story would work well in this format -- they would complement each other as opposed to just shooting a story because it's all we can afford.

You two worked very closely on this film, which sounds like a trial for anyone, let alone a married couple. And I noticed the relationship and the clashes between the couple in the film were very realistic...

Laura Lau, producer: That has nothing to do with our marriage!

Well, you two are perfect together, of course.

Lau: Of course. We work really closely. We've been together a long time. We made a film before this ["Grind"], we made a short before that, and we've written a couple of scripts together. We have a lot of fun working together.

Kentis: We're really a filmmaking team. There's really no job that isn't interchangeable. I did some producing, and we shot the film together.

Blanchard Ryan, lead actress: Working with a couple, it made us feel better, because it was a risky film on many levels: the nudity, the sharks, being in the ocean, having to carry a film when you're two actors who no one knows. We trusted them and knew they weren't going to clash like other teams, and that was a comforting feeling for us.

Daniel Travis, lead actor: We'd often be doing a take, and Laura would say, "Are you sure you got this?" Everybody was making sure that everyone else was taken care of the whole time.

Did you do a lot of takes? Because being out at sea like that, it seems like it would be hard to get the right footage.

Ryan: We'd be in the middle of a take and a wave would splash up into your face and we'd have to say, "Well, that was a great take but it ain't gonna make it into the movie."

Kentis: Also, they look like they're floating in the middle of the ocean, and they are -- we were about 18 miles out, in the Bahamas -- but the currents were wicked. So at first we tethered them to the boat. That kept them from getting swept off, but they had to really swim. In every single scene, they're kicking like crazy just to keep in position for the camera. So, to still perform and do all the emotional stuff they had to do

Lau: Everything was very tightly scripted, and when you guys got out there, it was hard. You had to remember your lines.

Ryan: The sky would change and we'd have to flip to another scene. So we had to have the whole script in our heads.

Travis: The jellyfish just showed up one day. So we jumped into that scene.

Lau: Actually, that's the scene we were shooting!

Kentis: It was one of the wonderful things that happened. The jellyfish were always in the script, but I thought we'd have to go out and search for them, and the day we decide to get the topside coverage of it, we went in the water and we were immediately surrounded by jellyfish.

Yay! What could be better?

Kentis: Yeah, what a stroke of luck, surrounded by jellyfish!

Ryan: We felt like Mother Nature was on our side. When we were doing one of the more intense scenes, it was just a normal, choppy day, and then all of a sudden, the water laid down like glass. It was completely calm and it suited the scene so well.

The water is doing so many different things during the movie, it seemed choreographed to fit the emotional mood.

Kentis: It was a conscious thing. We generally knew the mood we wanted and what we wanted the sky to look like.

How close did to you stick to the real story of what happened to these people?

Kentis: It actually happened off the Great Barrier Reef in Australia, but I wasn't interested in the real people involved. I did no research on them. I didn't want to represent their relationship or their lives. We changed the names, we invented our own characters, because that wasn't what I cared about, and also out of respect for the real people involved. That's why we left where it was set ambiguous on purpose, because we didn't want to lay that trip on anybody's tourist trade.

Ryan: Plus, there are great white sharks in the Great Barrier Reef. I would not have wanted to swim around with those.

Kentis:: They're not by the reef, really. They're out in the open ocean.

Ryan: Well, we were in the open ocean.

What kind of sharks did you actually film with?

Kentis: They were gray reef sharks.

Kentis: They average seven to 11 feet. And there were bull sharks now and then. We worked with real experts. It was low budget, but the money that we had went toward paying for the safety aspects of it. There are top shark people in the Bahamas, which is why we shot there. We shot for two days with the sharks, and they wore anti-shark chain mail suits underneath their wet suits. I did not, because I was working the water camera. Laura was working the boat camera.

Ryan: The chain mail cut into you, too. After a while, I only wore it on my legs.

Travis: And it's hard to stay buoyant when you have that extra weight on.

So you have to throw tuna in to get the sharks to come close?

Ryan: Yeah, and then when they wanted the sharks to swim really near us, they would throw the chunks of tuna right next to us. I'd shout, "A little close on that one! That's a little close!"

Lau: You know, I never told you this before, but I would wait until you weren't looking and then I'd throw it nearby.

Kentis: Laura and one of our wranglers were in cahoots.

Lau: When she looked away, I would hurl the chum in that direction, because [to Ryan] whenever it got close and you saw it, you would freak out.

Ryan: Yeah, I wonder why!

Yeah, you're such a high-maintenance actress, whining about chum being chucked at your head in shark-infested waters.

Ryan: No kidding! But they're beautiful, powerful, amazing animals. I kept trying to talk myself into it by saying to myself, "Look at how lucky you are! You're swimming in the middle of the Caribbean on a gorgeous day with these exotic animals! You could be sitting in some office building at a job you hate!" But then 10 seconds later I'd say, "No, I'm miserable! I want to get out of here!"

Lau: These are known shark populations, and the people we work with go out there every day. The sharks know, almost like pigeons, that they're going to get fed. It's true that the actors couldn't splash around too much because they could get bitten by accident. Anytime you're in the water with animals with large teeth, there is a danger. But I certainly never felt that anybody is in danger. I'd be standing on this platform in water that was filled with blood and chum

Kentis: What happens is, we throw the chum in the water to get the sharks to move. But once too many pieces are in the water, they get really worked up, and then the actors would have to hurry and get up out of the water. But Laura would still be on that platform and they'd be going mental. And in the water with the camera, you'd be getting bumped constantly. There were times I'd look down, there would just be gray, no blue.

How many sharks are around at one time?

Kentis: I'd be shooting, and the camera would get jerked, and without even thinking about it, I'd yank it back, and I'd be pulling it out of a shark's mouth. When we'd come up, you could see the teeth marks on the housing.

Why would they bite that and not you?

Lau: Because it was yellow.

Lau: Show them your scar.

Ryan: There's the scar -- it's healed a lot, but it was bleeding like crazy. I was like, "Did you get it?" Because if I'm gonna get bit, at least let it be usable footage.

Kentis: We missed the shot. But that was an important dive, it was a dive where I knew we'd see barracuda and nurse sharks and a big eel.

When I saw the eel, I thought it must be footage from some show on the Discovery Channel, but then there you are touching them.

Ryan: It was important for us to be in the shots with the animals so that people didn't think it was fake.

Kentis: That was key to the movie to me. Everything today is done in CG [animation], and personally, I don't get the same sense of danger that I do with movies from the '70s and '80s, when you saw stuntmen doing things, and you'd say, "Oh my god, someone was in that car when it wrecked!" So, it was important to work with real sharks, the way their tails flop around like big rats in the water

Ryan: Yeah, we've all seen sharks cruising by on "Shark Week" but you don't realize how erratic and jerky they can be in the water.

Travis: In movies, there's one shark in the water, that's the one that's going to attack you, as opposed to a group that just hangs out and circles in and waits.