Don't call it a comeback

John Kerry may be the new front-runner, but he knows how dangerous that can be. Case in point: The retooling Howard Dean. 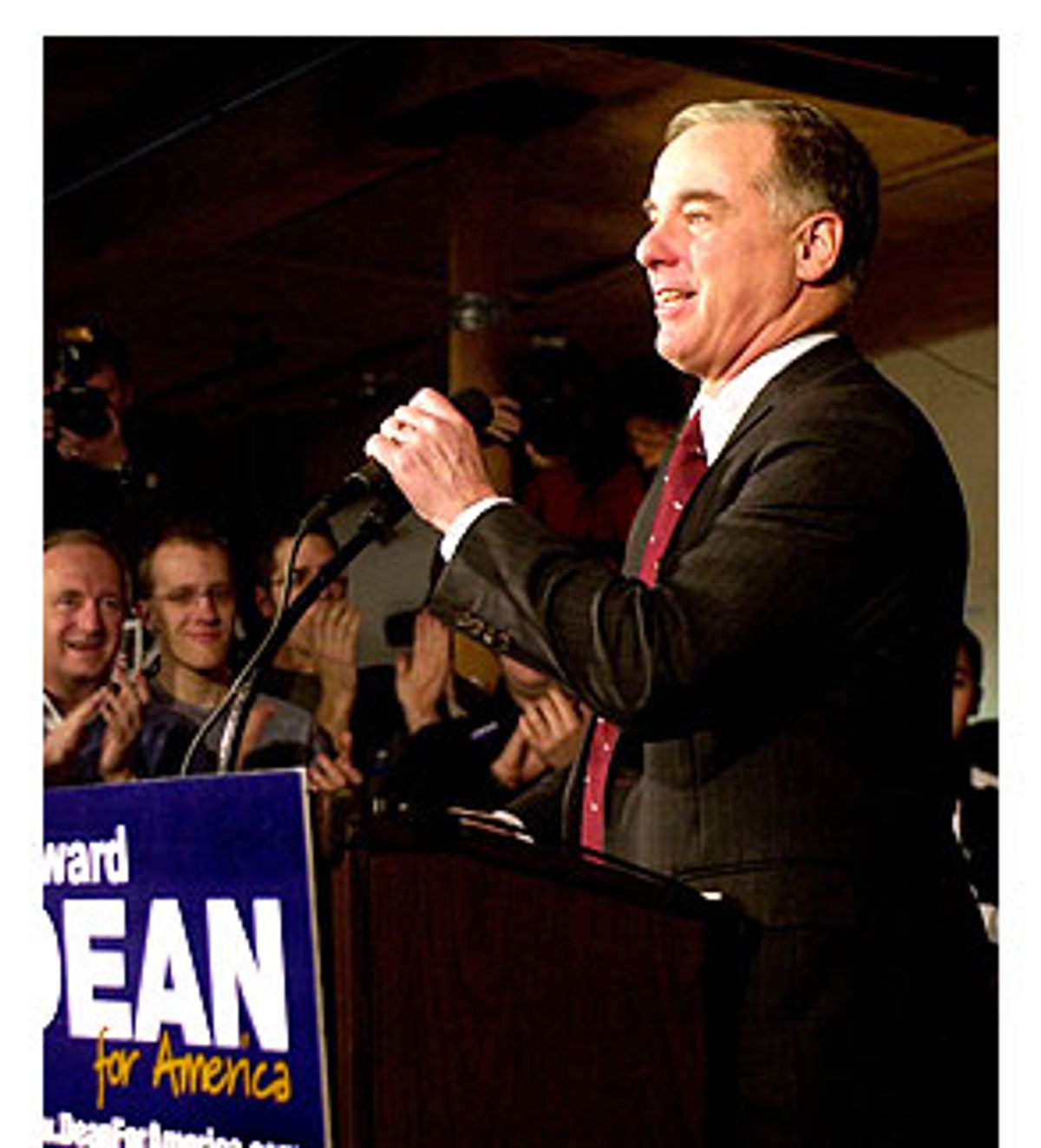 At a "town hall" event Thursday at Daniel Webster College, there wasn't nearly enough room to accommodate the media who came to see John Kerry, let alone the voters he was actually there to address.

Over at Kerry headquarters in Manchester, staffers were asked to give up their cellphones to a bunch of veterans who had shown up to volunteer, and the campaign ran out of phones to spare.

After his emphatic come-from-behind victory in Iowa, all eyes -- and the dreaded "front-runner" label -- are on Kerry, whose campaign is now bracing for assaults from six opponents desperate to knock him down.

"The last two weeks of this campaign have really been very different," he told the audience at one of his appearances.

Kerry's not the only one adjusting to dramatic changes ahead of the New Hampshire primary on Jan. 27. All the candidates now face a field completely realigned since just two weeks ago, when Howard Dean dominated the polls here. Kerry trailed both Dean and Wesley Clark before Iowa, but polls now show him ahead. A Boston Herald poll has Kerry 10 points ahead of Dean among likely primary voters, with Clark in third place.

It looks certain now that the primary season will be highly competitive and drawn out. The good news for Democrats, at least theoretically, is that whoever comes out of it will be a stronger general election candidate. Kerry and John Edwards have already improved dramatically, as the results in Iowa prove. (Kerry won with 38 percent of Iowa's delegates and Edwards finished with 32.)

But the new alignment of the field pretty much kills the possibility of the quick and orderly contest that Democratic Party chairman Terry McAuliffe had hoped for, meaning that the nominee is likely to emerge depleted of funds to take on President George Bush in November.

Dean, who before placing third in Iowa was the only candidate with the means and popularity to win quickly, now finds himself under enormous pressure to change course. The danger is that many undecided voters in New Hampshire are reaching the same conclusion many Iowans did: The man may not be electable. (And for all you Dean supporters who think this is all a consequence of media overkill, please note that Iowa made its choices well before the deluge of down-on-Dean analysis over the last couple of days.) The task of calming those concerns becomes more challenging every time his unusually raucous concession speech is lampooned on television.

One elderly voter at the Nashua forum, Milton Willis, said that he supported Dean, but was rethinking his options after Iowa. "I just didn't think he was very presidential," he said.

Along with retooling his image, Dean will also have to find a new issue. The fact that even the most fervently antiwar Iowans went heavily for Kerry and Edwards -- despite massive spending by the Dean campaign on a commercial about his early opposition to the war -- suggests that Dean will have to find a different way to contrast himself with his opponents.

He's already expanding his message. There's a new TV ad about Dean's vision to fix the economy. And Thursday, Dean introduced a new campaign finance proposal to limit contributions to $250 across the board.

In the meantime, his supporters have bombarded Dean's Blog for America with desperate suggestions about how to turn things around, and some of his big contributors have vented their concerns on emotional conference calls with campaign staffers.

Dean's defeat in Iowa doesn't erase the considerable assets he has here, both in long-committed support, organization and money, all of which makes it premature to be talking about his campaign in the past tense. But the media story that has moved rapidly from "Dean Can't Lose" to "Dean Is Dead" can have a self-fulfilling effect: Just as the first story line helped Dean raise funds and attract volunteers, the second could just as easily drive them away.

Whatever happens with Kerry and Dean, a number of the other candidates could have a huge impact on the race without actually winning here.

Clark has quietly built up considerable support while his opponents were in Iowa, although his nonparticipation in the caucuses left him often overshadowed by the events there. His campaign has held that a strong showing in the primary here would position him to do very well in the seven contests to be held on Feb. 3, including South Carolina, Arizona and Missouri, states in which he is strong in the polls.

Edwards, who has effectively cast himself as the race's most positive campaigner, is hoping to repeat his Iowa performance and translate a good result here into big wins on Feb. 3. He has already seen his fundraising spike dramatically in the last couple of days.

And Joe Lieberman, who also skipped Iowa, hopes to resurrect his candidacy by being the sleeper candidate this time around, and then moving on to win in Arizona or another of the more conservative-leaning states voting that day.

Interestingly, the only one of those candidates with significant funds who hasn't spent money on ads in any of those Feb. 3 states is Kerry, who is depending on a second win here to make him a force in the contests to come. To achieve that, he'll have to continue to do what he did over his last weeks in Iowa, where his urgent performances on the stump and effective outreach to veterans fueled his victory.

Kerry's Iowa win has already translated into hundreds of thousands of dollars raised, according to the campaign. And he'll attempt to press home his electability with a new ad that says he is the candidate who is "ready for the presidency."

But Kerry is no longer in a position to sneak up on the field as he did on Monday night. His great victory in Iowa will earn him front-runner treatment in New Hampshire, which means ceaseless attacks from his opponents, and greater scrutiny from the media. His challenge will be to avoid the complacency trap he fell into early last year, when his status as early media favorite -- based on fundraising and establishment support -- was completely eclipsed by the more innovative and exciting Dean campaign.

"Kerry went through a political near-death experience," said Robert Zimmerman, a Democratic fundraiser who threw his support to Kerry in December. "I think he knows that he can't afford to think of himself as a front-runner, or to allow his campaign to be characterized that way."

At Daniel Webster College on Thursday, Kerry proposed reducing healthcare costs by allowing the importation of drugs and by using the federal government's buying power to negotiate lower prices. He also reacted to Bush's State of the Union speech last night, saying it showed that the president "just doesn't get it."

But the speech was mostly an amalgam of what one reporter called Kerry's "greatest hits," the recitation of his accomplishments as a soldier and a politician punctuated by applause-inducing condemnations of the White House.

The audience reviews were mixed. Mary Willis, Milton's wife, thought Kerry did "wonderfully," and that she would likely vote for him. Tom Callahan, a registered Independent, said he was in the process of making up his mind between Kerry, Edwards and Clark. But Kerry's performance did little to move him, offering criticism that echoed what many Democrats said about him a year ago: "I like him," he said, "but I think maybe he needs a new speechwriter."