Silence of the blogs

Why did the New York Times ignore Baghdad blogger announcements and accounts of a big pro-democracy demonstration? 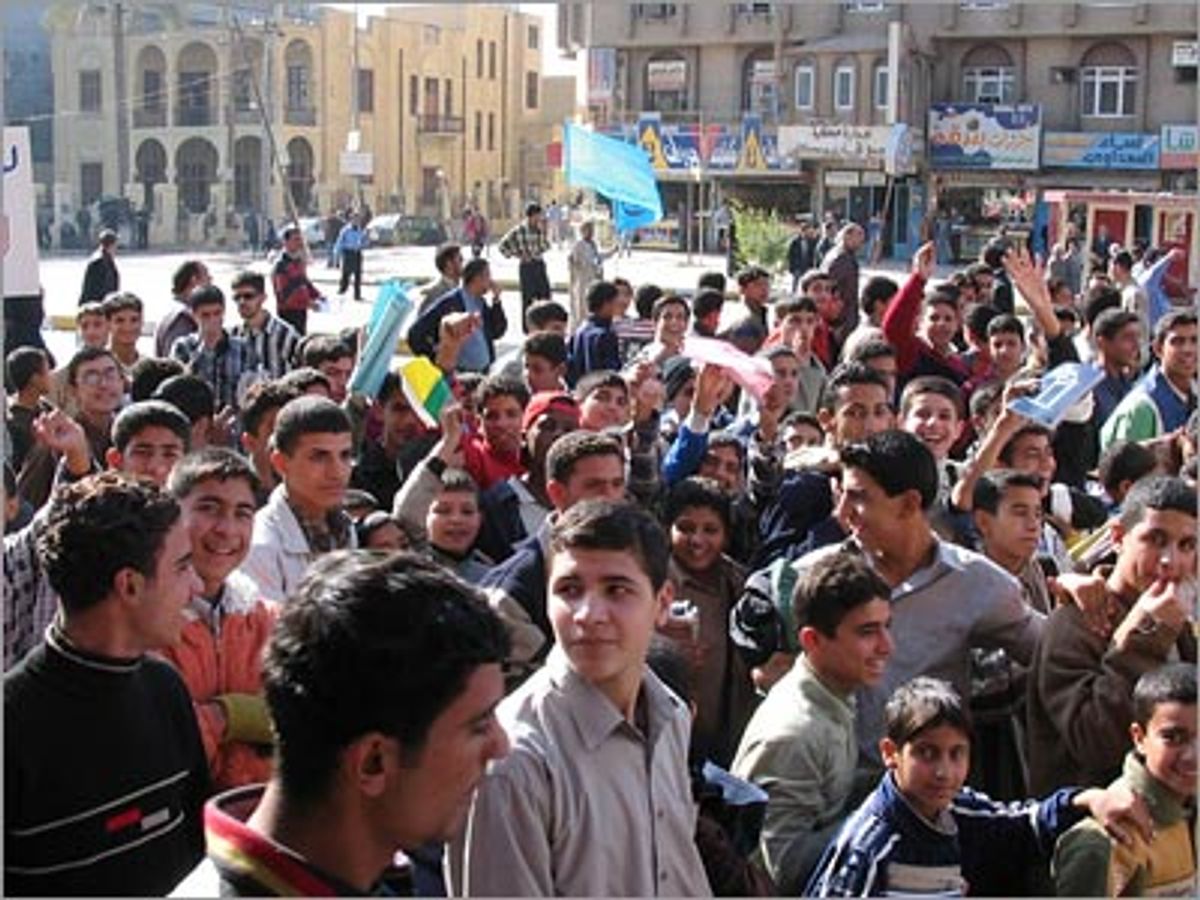 Zeyad, the "gamer of Baghdad" profiled earlier this week in Salon, is famous in the international gaming community for his reports on gamer culture in Iraq. But he was also recently responsible for a furious stir online regarding the way news from Iraq is covered by the Western media.

On Dec. 10, 2003, pro-democracy, anti-terrorist demonstrators peacefully flooded the streets of Baghdad. A coalition of Iraqis of many political parties and religious affiliations, tribes and ethnicities, young and old (including many students), demanded an end to attacks on civilians. They also demanded that Arab media stop depicting the Baathist and foreign jihadi culprits as members of some kind of just "resistance." Even the Al Jazeera network estimated them at over 10,000 strong.

I know all this, not from reading any significant coverage of the event by the mainstream Western press (There was little to none). Rather I know it because an Iraqi who's been a computer user since childhood went out and reported on it himself. Zeyad's entry was linked to throughout the Web. But the so-called "paper of record," the New York Times, gave the event scarce coverage, and that enraged many leading lights of the blogosphere, especially those on the conservative or liberal hawkish end of the spectrum.

"The organizers of the demonstration failed to alert the Times in advance," says New York Times public editor Daniel Okrent, relating to blogger Glenn Reynolds of Instapundit the Baghdad bureau's explanation for why the march received scant coverage in his paper. (Especially when far smaller Iraqi protests often wind up on the front page of the Times Web site.) "More crucially," added Okrent, "the responsible parties at the Times dropped the ball."

This was perplexing, because Zeyad and other Iraqi bloggers promoted the march on their sites days in advance. But is Baghdad bureau chief Susan Sachs or her staff even aware of Iraq's postwar blogs?

I contacted Daniel Okrent on this, and he called Sachs in Baghdad, then related her answer back to me:

"She says that the staff -- including people who monitor the wires, the police radio, the military, the CPA, [Coalition Provisional Authority] the Iraqi Governing Council, the Arabic TV and Arabic Web sites -- does not check blogs on a regular basis. One of the office staff sometimes run across them when doing Google or other similar searches."

Okrent notes that Ghaith Abdul Ahad, a friend of the original Baghdad blogger Salam Pax, publishes a blog called Gee in Baghdad, and is on the Times' Baghdad staff. (As was Salam himself, for a time.) Ahad's blog, however, has not been updated since September.

As for Sachs, Okrent tells me by e-mail, "Susan says she personally does not refer to the blogs."

A direct response from Sachs did not arrive by press time. Daniel Okrent did however put me in touch with acting foreign editor Alison Smale, for more background.

In the Times' defense, Smale cites the bureau's stretched resources on Dec. 10. While declining to speak for Sachs, she tells me by e-mail, "I can say that it is often, though not always, more effective to send an e-mail than to rely on people logging on to blogs. In general, of course, the point you make is valid -- they offer important tips, if not always instantly verifiable facts."

So it was that Dec. 10 came and went, and while the Times has given much more coverage to much smaller demonstrations (for jobs, for Saddam, for al-Sadr, and so on), the thousands of Iraqis calling for self-rule and an end to being targeted by random Baathists and other fascists rated a single photograph. Conservative press like the Murdoch-owned Weekly Standard (which triumphantly ran an excerpt of Zeyad's account in a recent issue, were inclined to believe this disparity prima facie evidence of leftward bias. But at least for the Times, a better explanation is probably contained in the Jan. 15 New York Observer, which describes a bureau besieged by internal politics, cut off from the city by a tall fence that has garnered it "the Jail" as a nickname, and staffed by overtaxed reporters who cannot perhaps be bothered to click though a Google link. So it was that a computer literate Baghdadi dental student had the scoop on Dec. 10 over the Times and pretty much every other major Western news outlet with a local bureau.

"Here is one young man in Baghdad equipped with nothing but a camera and a keyboard who reported on news better than established media worldwide," says blogger Jeff Jarvis. "This shows what citizens media can accomplish." (It was Jarvis who put the digital camera in Zeyad's hand, sending it to him via Federal Express to Baghdad at a shipping cost half as much as the $200 camera.)

"My guess is that it would take years for Westerners to understand Iraq and Iraqis," Zeyad tells me, "but we're working on it and that's what my blog is mostly about." As it turns out, the first step may be convincing Westerners that their own press isn't always (or even usually) the best authority on the subject.