The Sundance winners that will be coming to a theater near you soon -- and the ones that won't but should. 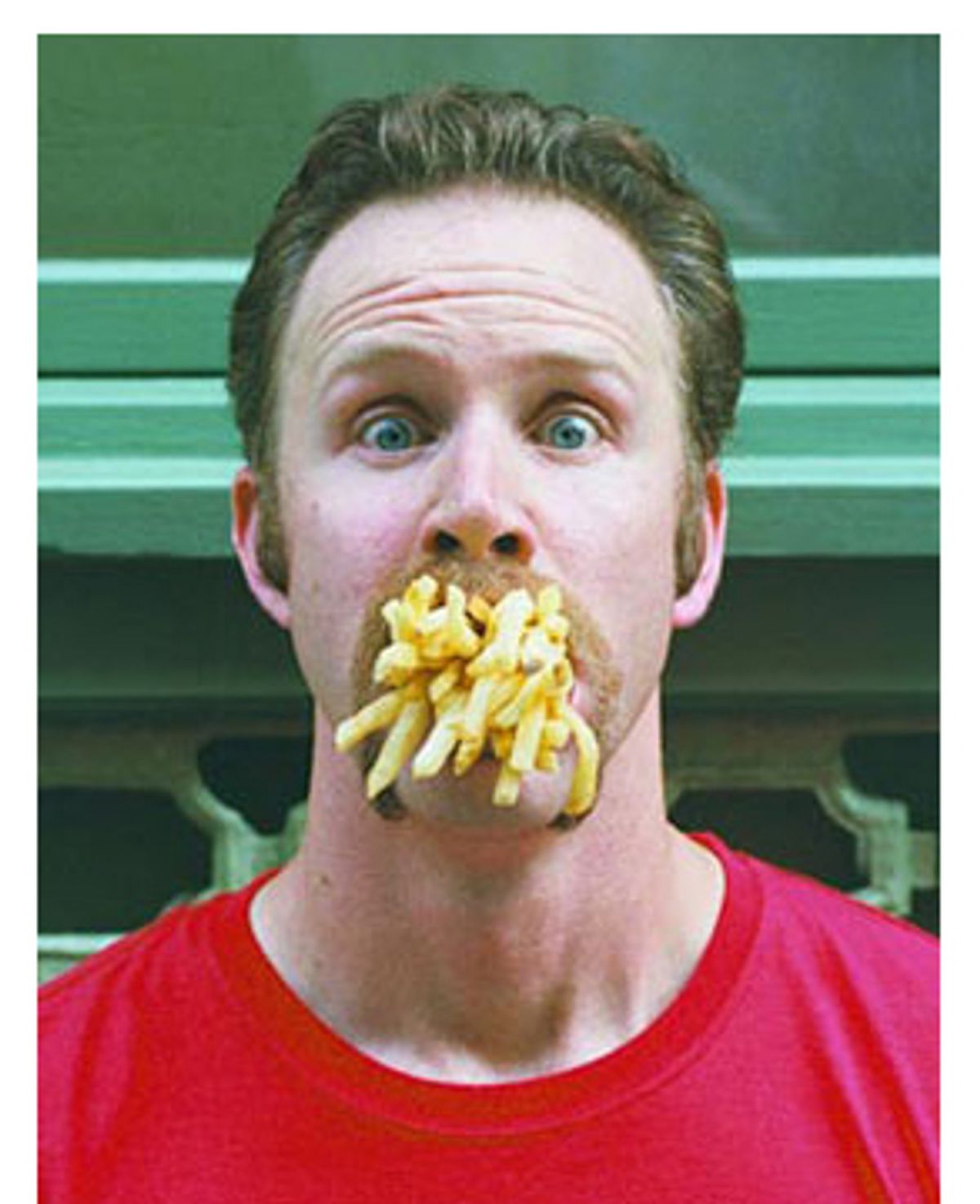 As Sundance wraps up, the 40,000 people who attended this year's festival have learned many lessons: 1) Not everyone looks good in a bright pink cashmere hat and scarf, even if they were free at the Independent Film Channel party; 2) dining without a reservation on the first Saturday of the festival means waiting more than an hour for really bad miso soup; 3) sometimes two hours ahead of showtime isn't early enough; 4) you might look like a rock star walking around smoking cigarettes in 15-degree weather without a hat, but you won't feel very cool the next day when your head is full of snot; and 4) it's OK to gaze at Peter Sarsgaard when you see him on the street, as long as you don't listen to what he's saying ("How could I turn down a black cashmere sweater?").

While the rise and fall of the lords of the Sundance might have been foreseeable, this year's festival was anything but predictable, down to the unexpected winners announced at Saturday night's awards ceremony. Many thought that "The Woodsman" would take the Grand Jury Prize for best film drama, but instead it went to the ultra-low-budget "Primer," about two men who invent a time travel machine. Director Shane Carruth looked even more shocked than the audience when the award was announced, but managed to thank "a cast that doubled as a crew" when accepting the top honor for his $7,000 film. Quirky comedy "Napolean Dynamite" looked like a shoo-in to win the Dramatic Audience Award, but Joshua Marston's "Maria Full of Grace," about a girl struggling to support her family in Bogota by smuggling drugs to the United States, walked away with the prize.

Winners in the documentary category were far more difficult to predict, given how many outstanding films made it to the festival this year. The Documentary Grand Jury Prize went to "DIG!," in which director Ondi Timoner follows the rise and fall of rival musicians. The Documentary Audience Award went to "Born Into Brothels," a moving exploration of the children of Calcutta's red light district which received consistent rave reviews among crowds in Park City. While many expected Morgan Spurlock's "Super Size Me" to take the Audience Award, Spurlock did win the Documentary Directing Award, while the Dramatic Directing Award went to Debra Granik for "Down to the Bone," the story of a mother battling with drug addiction.

But surprise winners probably made sense this year, given the number of times the reigning opinions seemed to shift dramatically. During the first few days of the festival, attendees seemed to agree that the pickings were slim. Distribution executives, publicists, producers and members of the press traded harsh reviews as they bumped into each other in crowded restaurants and parties.

And yet, as the first weekend expired, festival-goers began to chat excitedly about their new favorites. While the words "low budget" and "shark movie" have probably never been uttered in the same sentence before, "Open Water" offered all of the nail-biting realism of "Blair Witch" without inducing vomiting. It's not tough to figure out why Lions Gate snapped this one up -- try mouthing the words "'Jaws' meets 'Blair Witch'" in a crowded room and see how many ears perk up.

And if that reference pair sounds good to audiences, how about "Bend It Like Beckham" meets "Smoke Signals"? Although "Edge of America," by "Smoke Signals" director Chris Eyre, seemed to hit every feel-good film cliché, no one at my screening was able to resist its charms, thanks to understated but snappy dialogue, a satisfying narrative arc and a memorable performance by James McDaniel. Two other films receiving roundly positive reviews were "The Motorcycle Diaries" (purchased by Focus Features) and "Speak" (no distributor yet).

Big talk of "Napoleon Dynamite" from early on in the festival panned out, as the goofy comedy about a teen misfit was picked up by Fox Searchlight. Described as a kinder, gentler "Welcome to the Dollhouse," the film didn't win any awards but is sure to draw healthy crowds when it1s released to wider audiences this year. Warner Independent Pictures purchased "We Don't Live Here Anymore," a dramatic exploration of the trials of marriage starring Mark Ruffalo, Laura Dern and Peter Krause. In addition, director Kevin Wilmott's look at what would've happened if the South had won the Civil War, "CSA: The Confederate States of America," was loved and hated and heatedly discussed all week, so it's no surprise that IFC Films snapped it up. Fine Line acquired "Maria Full of Grace," and word was that Sony Pictures Classics was nearing a deal to acquire the gay-themed comedy "Touch of Pink." Even films with risky content won out. "The Woodsman," in which Kevin Bacon plays a recovering pedophile, was picked up at the end of the week by Newmarket Films. [For a full list of the winners of Saturday's Sundance awards, click here.]

Viewers in search of fare a little edgier than "Edge of America" couldn't have been disappointed -- not at first, anyway. "One Point O," directed by Jeff Renfroe and Marteinn Thorsson, was indeed a "Kafka-esque nightmare" as advertised. But with such a striking visual style, thoroughly original ideas, subtle but disturbing dialogue, and a relentlessly foreboding mood, you would expect this film to blow you away. No such luck. The viewer learns too much too fast, leaving the plot to repeat and repeat and double back on familiar ground until its hasty conclusion.

"The Machinist," directed by Brad Anderson ("Next Stop: Wonderland") shares the darkness of "One Point O," but has the opposite flaws. Instead of aimlessly pacing back and forth along the same corridors, the plot of "The Machinist" unfolds carefully and hits all the right marks. Unfortunately, the Big Reveal at the end of a suspense thriller ("The Usual Suspects," "The Sixth Sense," "Seven" -- the list goes on and on) has become so common that, once you can see, very early on, that a Big Reveal is on the way, it's tough not to become consumed with trying to figure it out. And when you're solving a plot puzzle instead of following the dramatic action of a film, you're out of the game. That said, "The Machinist" is the kind of movie that will naturally draw in audiences. If the thoroughly mediocre tricks with smoke and mirrors of "The Ring" can make $128 million, then "The Machinist" should be a hit -- if and when it attracts a distributor.

One delightful movie that seemed to be getting very little buzz was "D.E.B.S.," a sure-footed teen comedy directed by Angela Robinson about an elite paramilitary group populated by long-legged agents in Catholic school-girl uniforms. Despite clever dialogue and hip visual touches, this appeared to be just another goofy low-budget "Charlie's Angels" -- that is, until Amy, head D.E.B., falls in love with the beautiful criminal mastermind she's been charged with bringing to justice. Considering how fun and hilarious and modern this movie is, it's surprising that more people aren't talking about it. Regardless, Sony's Screen Gems is its distributor, so you should be able to find it in theaters sometime this year.

Most festival-goers agree that this was a great year for documentaries at Sundance. While viewers raved about such films as "Imelda," a stirring look at Imelda Marcos that "goes beyond the shoes," and "Deadline," an exploration of Illinois Gov. George Ryan's move to commute the sentences of 167 inmates on death row, distributors were in hot pursuit of the next "Bowling for Columbine." "Riding Giants," Stacy Peralta's doc about big-wave surfing, is also a clear crowd-pleaser, and while it lacks the crystal-clear, high-tech cinematography of last year's surfing doc "Step Into Liquid," it more than makes up for this lack with much sharper commentary, far more personal stories that range from quirky to deeply moving, and the distinct visual style that made Peralta's "Dogtown and Z-Boys" such a critical success. Peralta has a great eye, a real knack for story, and the passion to do justice to the dizzying evolution of big wave surfing over the past 40 years.

While some of the flashier docs with fun subjects are sure to get a lot of recognition, films with heavier subjects like "Control Room" and "Home of the Brave" are likely to get lost in the stampede. That would be a real shame, given the knack both of these documentary filmmakers have at making very broad subjects so affecting and personal. In "Control Room," director Jehane Noujaim explores life behind the scenes at Al Jezeera, the independent news outlet watched by millions in the Arab world. Instead of pounding home one particular point of view, Noujaim introduces us to memorable characters, and in so doing, reveals the passions, biases, and heartbreaks of those involved in covering the war in Iraq. For viewers who've mostly watched American coverage of the war, "Control Room" offers an entertaining but eye-opening glimpse at last year's events through a different perspective.

Surprisingly, "Home of the Brave" offers the same very personal approach to significant events, even though most of them took place 40 years ago. Director Paola di Florio examines the life and death of Viola Liuzzo, the only white woman murdered during the civil rights movement, partially through the experiences of her children. Liuzzo was campaigning for black voting rights near Selma, Ala., when she was killed by four members of the Ku Klux Klan, one of whom turned out to the a member of the FBI. As new details of the story emerge and Liuzzo's family struggles to come to grips with her death years later, the film reaches an emotional high pitch that's so heartbreaking yet full of hope, the experience is unforgettable. After so many paint-by-numbers documentaries about the civil rights movement, it's remarkable that a filmmaker could manage to bring the period and its tragedies alive through such a personal story.

As the Sundance festival wound down, the talk on the streets was far more positive than it had been just a few days earlier. Those who hadn't stayed out until 3 a.m. all week were clamoring to make it into the repeat screenings that had been set up later in the week to accommodate the most popular films. Others vowed to see the films they missed as soon as they made it into theaters nationwide -- a feat that's not so tough to accomplish, thanks to the enthusiasm of distributors this year. Whether or not any of these acquisitions makes sense critically or financially remains to be seen, of course. For the moment, though, despite the bleary eyes and crumpled clothing that signal festival burnout, most of the temporary residents of Park City you run into are more than happy to proclaim this year's festival a success.

But that may just be the free sushi and the pink cashmere scarves talking.