Meanwhile, Dean spins second as a moral victory -- but will he ever come in first? -- Edwards' backers say his fourth-place finish beats Clark's third, and Lieberman vows to fight on. 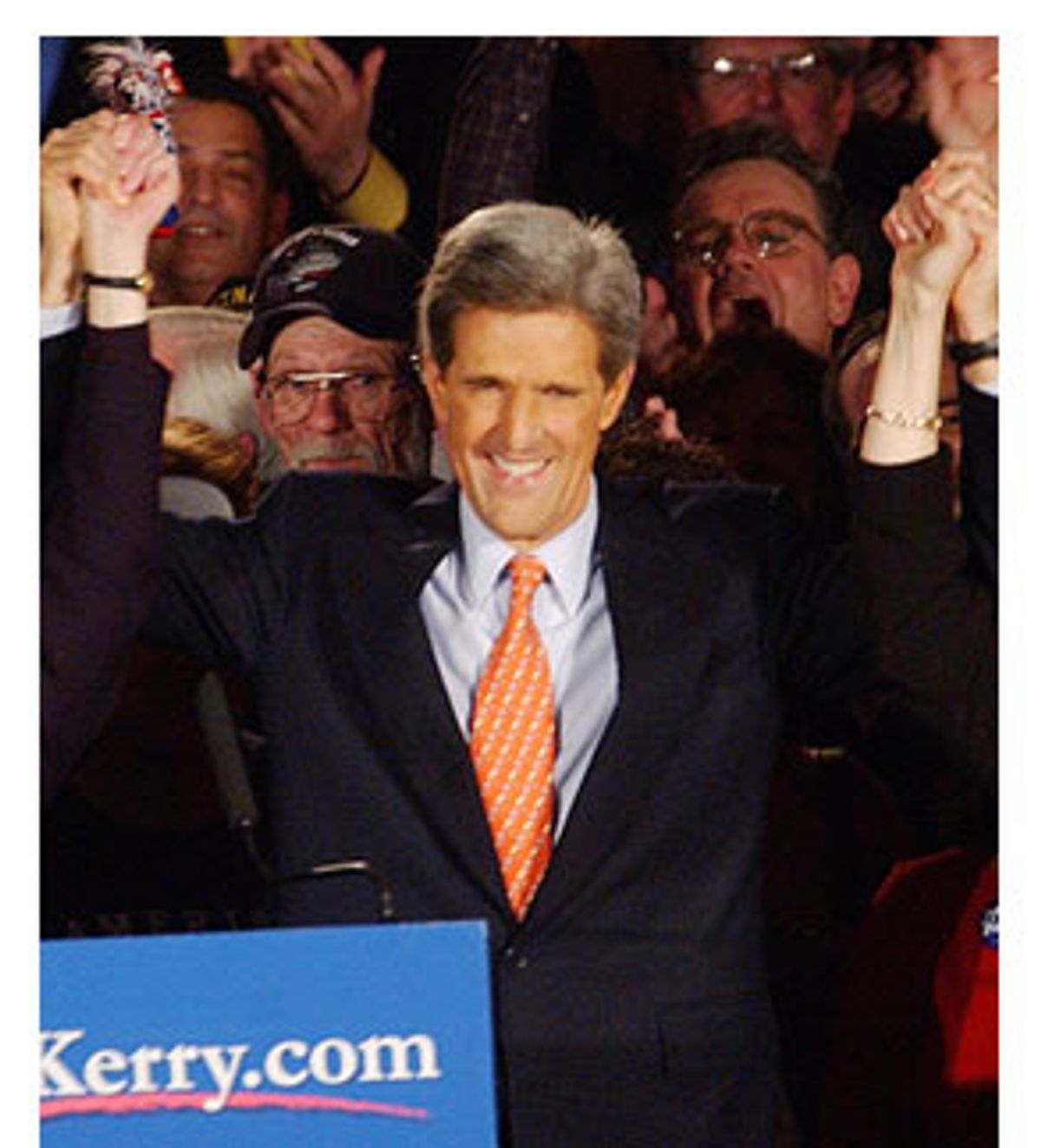 Hours before the polls closed, John Kerry was standing in the street outside his primary night headquarters, all but certain of another victory. Democratic Party chairman Terry McAuliffe leaned out his car window in a vain attempt to get Kerry's attention and yelled, "Go get 'em, John!"

Oblivious to McAuliffe, Kerry continued reaching into cars, shaking hands and commanding the drivers to "go vote." Cars and trucks drove by and honked, while a van with a P.A. system rolled by urging everyone within earshot to "change America" by voting for John Kerry.

"I really do have a great feeling," Kerry said to an unruly gaggle of reporters standing in the snow at roadside. "You've got to fight for every vote, and we've worked long and hard at this. I feel really good about this."

He had good reason. After a week of energetic if cautious campaigning, John Kerry emerged as the big winner in New Hampshire, and his support seems to be based largely on a simple argument: that he has the best chance to win in November. With 94 percent of precincts reporting, Kerry had 39 percent of the vote, with Dean at 26, Wesley Clark at 13, John Edwards at 12, Joe Lieberman with 9 and Dennis Kucinich with 1. And in most exit polls, Kerry's supporters tended to be those who placed the highest premium on the belief that their candidate could beat President Bush.

The Kerry campaign hopes that the win, coupled with his surprise victory last week in Iowa, will catapult him to victory in most of the seven contests a week from now, in South Carolina, Oklahoma, Arizona, New Mexico, Missouri, North Dakota and Delaware. Kerry takes off tomorrow for Missouri, where the withdrawal of native son Richard Gephardt last week left the state up for grabs.

"Now this campaign goes on to places all over this country," he said Tuesday night. "And I ask Democrats everywhere to join us so that we can defeat George W. Bush and the economy of privilege, and so that we can fulfill the ideal of opportunity not just for some, but for all Americans."

Meanwhile, it was the second straight defeat for Howard Dean, who was widely regarded just a couple of weeks ago as a heavy favorite for the nomination, but will now face huge pressure to win in the next round of contests. The question Tuesday night was how Dean supporters and opponents would spin his second-place finish, and whether North Carolina Sen. John Edwards' showing -- probably fourth, but just behind Wesley Clark, whose third-place finish wasn't impressive given the resources he invested -- was strong enough to give him momentum heading into Feb. 3.

Dean started off the week in a dire position, coming off an upset defeat in Iowa and an incessantly replayed concession speech that will go down in history as "I have a scream." After seeing a quick collapse in his support here, his campaign managed to do some nifty damage control, and ran a good enough race here in the last week to avert a defeat that some polls predicted would be even more lopsided than it turned out to be. He replaced his stock stump speech, whose refrain of "You have the power! You have the power!" was perfect for rallying the converted, with practical discussion of his executive experience as a moderate Vermont governor.

He lessened the fallout from his post-Iowa speech by addressing it with humor, simultaneously making the story seem trivial and strengthening the conviction of his dedicated supporters that the media was against him. It helped when he yielded to advice from many of his staffers by bringing his wife, Judith, out onto the trail. And his new ads were considerably brighter than the stark and negative fare served up by his campaign in Iowa, as Dean tried to make the angry caricature of a week ago seem like a distant and irrelevant aberration.

"We came in a solid second," Dean told Larry King on CNN after Kerry's victory was projected. "We needed a recovery from our performance in Iowa. We did what we needed to do."

But that's still not clear. The Feb. 3 contests don't favor Dean. John Edwards, thanks to his relatively strong finish here after a surprise second-place showing in Iowa, as well as his Southern roots, may well be able to claim a position as the chief challenger to Kerry in the South and West. The advantage in those Feb. 3 contests -- large and spread out as they are -- will go to the candidates with money for ads and positive coverage in the media. Following this result, Edwards should have plenty of both.

In comments to reporters while watching the returns come in, Edwards talked about his momentum. "Just a week or 10 days ago, we were in mid-single digits here, and we're clearly moving up," he said. "It's very encouraging."

Wesley Clark will have a harder time characterizing his share of the vote as anything quite so positive. Because he skipped Iowa to focus on achieving a good result here, and because his support in the polls fell so much from where he was just a week ago, the result has to be viewed as a disappointment.

Clark, whose rallying cry is "I'm not a politician," watched his support melt away over the last week when his lack of political skill became clear. After building up a lot of support while the other candidates were in Iowa, he spent the entire week trying to get the media to talk about something other than seeming discrepancies in his position on abortion rights, a comment from Michael Moore at one of his rallies that President Bush was a "deserter," and, in the final days, his slipping position in the polls.

But Tuesday night may have been most disappointing for Joe Lieberman, who comes from the neighboring state of Connecticut. (There were even rumors today that he would suspend his campaign in the event of a weak showing, which Lieberman denied.) His appeal was premised upon his ability as a moderate Democrat to win votes from independents and moderate Republicans. But for now, Kerry seems to be making that case most effectively. The veteran Kerry's strongest appeal is the line he uses over and over: "If George Bush wants to make this campaign about national security, I have three words that I know he understands: Bring it on!" As in Iowa, he has reenforced this selling point by surrounding himself with veterans, especially Max Cleland, the former Georgia senator who lost three limbs in Vietnam, and then lost his Senate seat when the Republicans painted him as weak on national security.

Kerry's appeal clearly worked on Democratic and independent voters united by a visceral desire to get Bush out of the White House. "It's the same thing over and over," said one frustrated Dean campaign worker, after logging dozens of calls to pledged supporters. "'I really like Dean, and his heart's in the right place, but we just gotta get Bush outta there.'"

But it's not clear sailing for Kerry. On Feb.3, he'll have to prove that he can appeal to the more conservative voters who dominate those states, as well as to black voters, who comprised almost none of the electorate in Iowa and New Hampshire. And even with whatever bounce he gets out of his win today, he'll have to overcome a natural disadvantage to Edwards and perhaps Clark, both of whom are Southerners.

Kerry didn't help his cause earlier today when he tipped his hand about the stock he would put in the South if he's the general election candidate. "Everybody always makes the mistake of looking South," Kerry said, in response to a question about winning the region. "Al Gore proved he could have been president of the United States without winning one Southern state, including his own." It may have been an honest assessment of the situation, but it's hardly the sort of thing he wanted to put into the hands of the Edwards campaign in time for next week's contests. No doubt Clark and Edwards would like to see it become the kind of issue that Dean's past remarks disparaging the Iowa caucuses became in that state.

For now, though, the Kerry crowd can celebrate another solid performance by a campaign that was brought back from the dead after a big shakeup at the end of last year. Over the last week, Kerry racked up endorsements from the Boston Globe and the League of Conservation Voters, which he quickly repackaged into his ads here. He spent the week keeping up a full schedule campaigning, including a fly-around on a helipcopter yesterday, while his staff pointed out just how hard he was working. "He gets up every day and zeroes in on voters like a heat-seeking missile, talking about what matters in their lives," said Kerry spokesman David Wade a couple of days before the vote.

It wasn't that Kerry was the most electrifying candidate. The crowds at Dean and Edwards events were certainly more responsive. Even in the context of his new, punched-up stump speech, Kerry still tends toward old-school faux-Kennedy rhetoric over his opponents' more conversational styles. (Even his line about the need to offer "solutions, not slogans" is itself a slogan.) But this is a year in which notions of natural charisma are taking a back seat to general election credibility.

Which brings us back to Dean, who now faces real questions about whether he can stabilize his candidacy, and whether the adjustments in his campaign over the last week came too late to prevent the idea from taking permanent root that he is a weak general election candidate. While his staffers talked about the momentum he gained by not being shellacked after his Iowa upset, it's still not clear which, if any, of the Feb. 3 states will provide him with an electorate that's any more sympathetic to him than New Hampshire. The Granite State, after all, neighbors Vermont, and voters there are highly familiar with him. He also had a top-flight ground organization. Now, he has to win fast: He can only spin second-place finishes as moral victories for so long.

For all his staff's spinning, the candidate seemed to know this, and was fully aware of the urgency of his need to come up with a big result tonight. Following a town hall meeting at Exeter Academy on Monday, Dean plunged into the crowd to shake hands, and to urge supporters one last time to get out and vote for him.

But he didn't, and it's still not clear when he will.