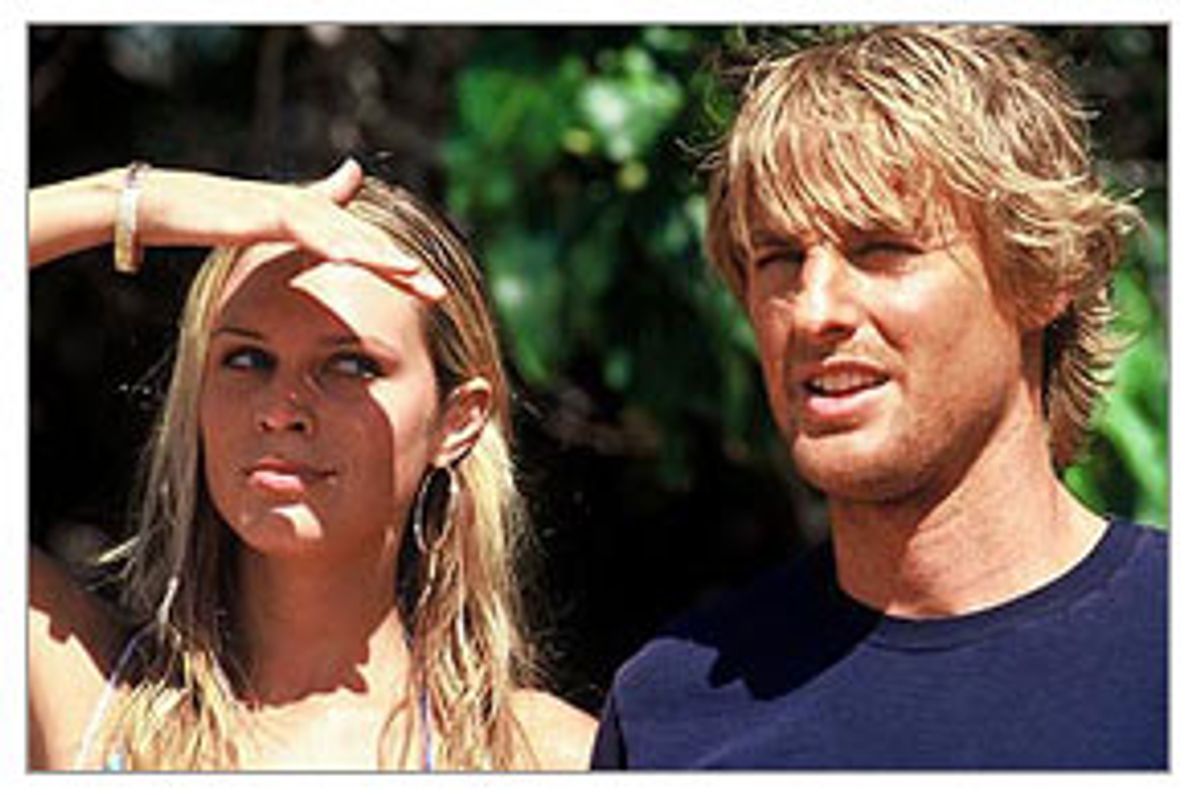 Deprived of forward momentum, a bounce merely goes up and down in the same place. George Armitage's film of Elmore Leonard's 1969 novel (his first foray into crime fiction after a career of writing western pulps) catches the shaggy-dog essence of Leonard's writing. The story is about Jack Ryan (Owen Wilson), a small-time burglar who gets caught in a scheme to rob a crooked construction tycoon (Gary Sinise). The movie is a garage-sale conglomeration of anecdotes and oddballs. The director and the screenwriter Sebastian Gutierrez understand the deadpan satire of Leonard's approach to caper plotting: The twists are not so much there to take our breath away as to make us laugh as Leonard's put-upon hero encounters one damn thing after another.

But casual is not the same thing as cavalier. Leonard may downplay plot mechanics but he doesn't neglect them (as can be seen in his new novel, "Mr. Paradise," in which he's near the top of his game). A plot has to be in place before it's possible for an audience to appreciate the way a writer or a director treats it, and Armitage's approach is so lackadaisical that the revelations of who's scamming whom have no snap, no irony; they glide by like everything else in the picture. So when the big surprises come at the end, it's next to impossible to figure out what's just happened, how the parties plan to get away with it, or how it was set up in the first place.

The laziness is disappointing because, for the first 40 minutes or so, "The Big Bounce" is very enjoyable. The book (which was filmed once before, in 1969, with Ryan O'Neal, Leigh Taylor-Young and Van Heflin) was set in Detroit. Gutierrez has changed the locale to Hawaii, and Jeffrey Kimball's cinematography sets you up for something funny and yummy and sinful. The look of the picture seems to have been inspired equally by tiki lounges, travel brochures, and a dirty-minded adolescent's fantasy of what a Coppertone ad might look like. It's so sunny and inviting that you can't blame anyone for lusting after a life of indolent wealth -- it's the natural reaction to the beach and the breeze and the rays. Sara Foster, as Sinise's mistress, and inevitably the woman to whom Wilson's happy-go-lucky loser is immediately attracted, fits right into the setting. She seems to have been created for nothing more strenuous than sunbathing and walking along the beach in a bright yellow bikini. You can hardly blame Owen Wilson for not being able to look at anything else, though it's typical of Wilson that he doesn't allow Jack's eyes to pop out of his head.

As in other comedies, Wilson has the pleasantly distracted air of a stoned Boy Scout. His thieving and lust aren't threatening; they're ticklish. Wilson looks so all-American that even his kinks seem wholesome. He's the perfect actor for a comedy that treats larcenous behavior with a shrug, and the good lines he's been given in the first half of the movie roll naturally off his tongue.

"The Big Bounce" is full of good people trying to get into the spirit of things. Morgan Freeman, as a judge who hires Wilson to work at his beachside bungalows, has more slyness and ease than he's had recently. And I wanted more of Willie Nelson and Harry Dean Stanton as Freeman's dominoes buddies. Bebe Neuwirth's approach is too stylized and brittle to fit comfortably into this type of casual comedy, and Gary Sinise doesn't have the material that would allow him to get laughs from playing the sleazy businessman -- he's just a snake in a cabana shirt. Charlie Sheen, as his gofer, doesn't have the material either, which is too bad because he seems always ready to be funnier than he's allowed.

"The Big Bounce" isn't painful to sit through, and Armitage has, here at least, left behind the violent perversity that marred the comic tone of his film of Charles Willeford's "Miami Blues" (and that also stuck out in "Grosse Point Blank"). This laid-back style suits him better as a director, but finally everything here is too mild, too sloppy. The title is meant to refer to the sexual thrill Sara Foster gets joining Wilson on his breaking and entering jobs. But the movie is so focused on getting a PG-13 rating that it doesn't go hog-wild with that premise. A noir comedy can't work on our fantasies of lust and greed if the director is trying to figure out how to keep his leading lady's breasts and bottom off the screen. "The Big Bounce" feels more like a dribble.