Not judgment day -- yet

Kerry has another big night, but Edwards and Clark still have some fight left. And they might buy Dean the time he needs to get back in it. 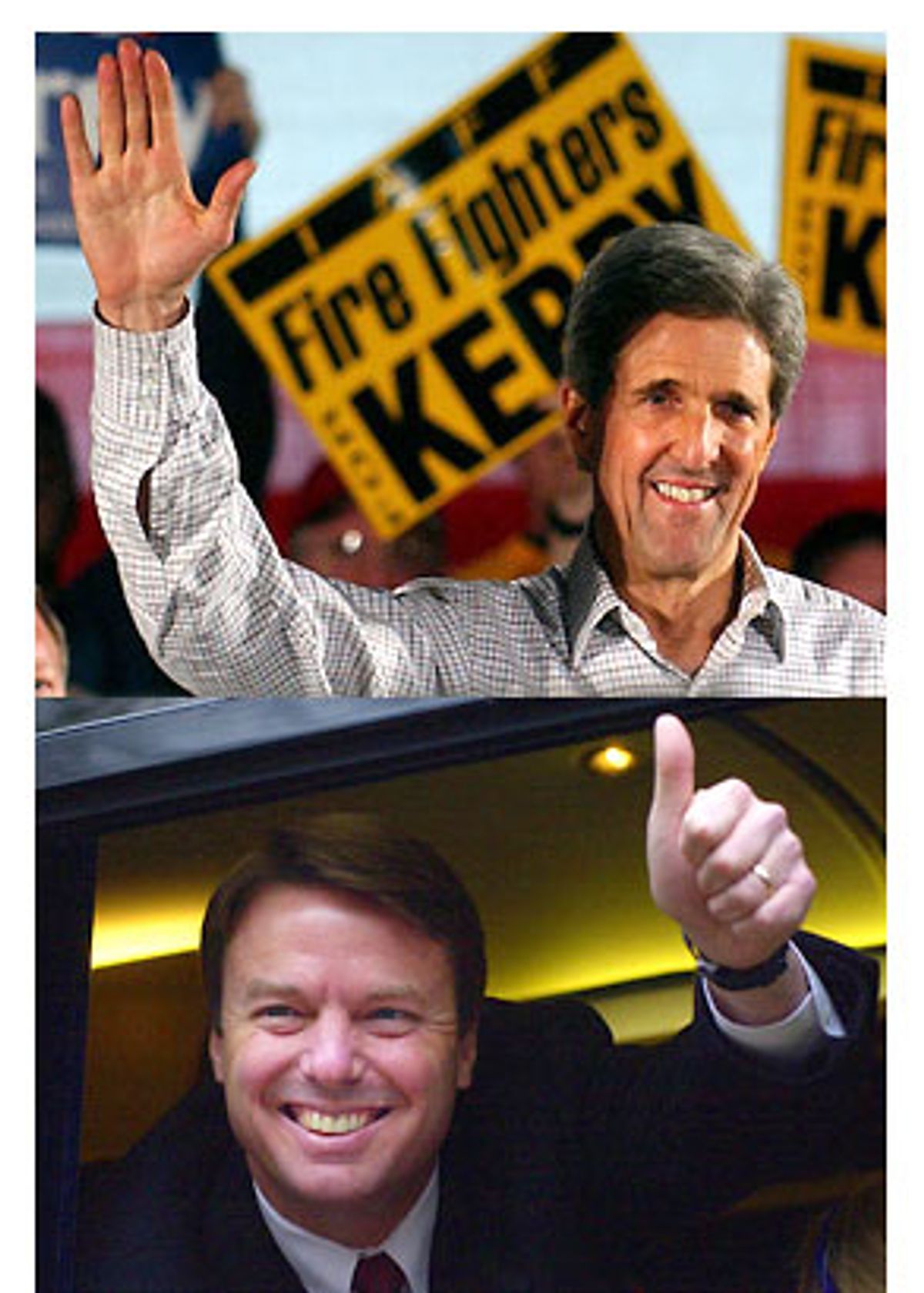 The home cooking went down easy in Columbia and Florence and Sumter and Greenville, and it helped Edwards cruise to a double-digit win over Sen. John Kerry in the South Carolina primary Tuesday night. But 49 other states have a say in picking the Democratic Party's presidential nominee, and John Edwards wasn't born in any of them.

As the race for the Democratic presidential nomination moves to some of those states in the coming week -- there are caucuses in Michigan and Washington on Saturday and Maine on Sunday -- the challenge for Edwards is this: Explain how his native-son status didn't really drive his victory in South Carolina, and show that he can win somewhere -- anywhere -- that can't be considered his backyard.

Edwards almost did that Tuesday night. The North Carolina senator ran neck-and-neck with Ret. Gen. Wesley Clark in Oklahoma, a state that may have some allegiance to the South but isn't really part of it. By midnight, Clark was leading Edwards by about 1,200 votes in Oklahoma, enough for Clark to claim victory even if CNN wasn't ready to call the race. The Edwards camp was laying the groundwork for spinning the result in Oklahoma as -- not unreasonably -- a tie.

Kerry supporters, eager to wrap their candidate in an aura of inevitability, moved quickly to dismiss Edwards' win in South Carolina and Clark's apparent win in Oklahoma as regional victories by regional candidates. Indeed, their efforts began even before the polls closed. Former Georgia Sen. Max Cleland, who campaigned hard for Kerry in South Carolina, told reporters in Columbia Tuesday afternoon: "There's no question that John Edwards has this as his briar patch, and Wes Clark has Oklahoma as his briar patch, so it's been an uphill race in those states."

The Edwards staff fired back with a lesson in geography. "Looking at the map, it looks to me that Oklahoma is about a thousand miles away from South Carolina," Edwards strategist David Axelrod told Salon late Tuesday afternoon, when it appeared that Edwards might win in Oklahoma. Another Edwards backer, College Democrats of America President Ashley Bell, said that Edwards' victory in South Carolina is no more of a "regional" win than Kerry's victory in New Hampshire was.

All that may be true, but with Tuesday's wins in Missouri, Arizona, Delaware, North Dakota and New Mexico, Kerry can now credibly claim to have national -- albeit not Southern -- appeal. For Edwards and Clark to position themselves as serious challengers, they're going to have to start showing the same kind of broad-based success.

It's hard to see how they do that.

Clark, a native of Arkansas, was initially pitched as a candidate who could do well in the South, where voters have a soft spot for veterans and for native sons. Although Clark was exuberant in claiming victory in Oklahoma, he barely made a dent in South Carolina. He finished fourth here, well behind Edwards, Kerry and the Rev. Al Sharpton, and the mood of his South Carolina supporters was sour.

Tuesday afternoon, a handful of Clark supporters waved signs in front of the State Capitol; one said she couldn't bear to look at exit polls and complained about what she considered intimidation of voters by Kerry supporters at a polling place she had visited earlier in the day. Tuesday night, the Clark victory party in South Carolina was more like a wake. Few supporters turned out for the event, and some of those who did complained about the "bastards" in the media who they say unfairly ignored the Clark campaign.

Clark's supporters aren't likely to feel much better today, at least as far as the press is concerned. Although Clark's campaign trumpets his win in Oklahoma and his second-place finishes in Arizona, New Mexico and North Dakota, Edwards did essentially as well as Clark did in Oklahoma and won decisively in South Carolina while carrying 25 percent of the vote in the big swing state Missouri. Advantage: Edwards, at least in the delegate count and in the eyes of the mainstream press.

And the Edwards campaign certainly acted as if it had the advantage Tuesday night. A few doors down from the somber Clark gathering in Columbia, the Edwards campaign threw a rollicking victory bash at the same bar where Hootie and the Blowfish played a benefit for the campaign Friday night. "Tonight, you said that the politics of lifting people up beats the politics of tearing people down," Edwards told several hundred mostly youthful supporters at Jillian's. "And today, we said clearly to the American people that in our country, our America, everything is possible."

Well, maybe not everything. While Edwards should be competitive in Tennessee and Virginia on Tuesday, success probably isn't possible before then. Both Axelrod and Edwards' press secretary suggested Tuesday afternoon that Edwards wouldn't compete seriously outside of the South again until the Feb. 17 primary in Wisconsin, implicitly suggesting that he would not campaign actively in Washington, Michigan or Maine. Tuesday night, however, Edwards vowed to campaign in Michigan, although possibly only to counter the perception that he was giving up on states outside of the South.

Larry Sabato, the director of the Center for Politics at the University of Virginia, said there's a good reason for Edwards to hesitate before heading too far north or west. "Winning South Carolina means that he's still alive and that he's got a ticket for Virginia and Tennessee," Sabato said. "But he can't win in Michigan, he can't win in Washington, and he can't win in Maine."

Edwards has at least a shot in Wisconsin. Former Vermont Gov. Howard Dean, who all but sat out Tuesday's contests after defeats in Iowa and New Hampshire, has a strong organization in the Badger State and hasn't lost much of it, said Seth Boffeli, communications director for the Wisconsin Democratic Party. But Boffeli said that it's important to remember that Wisconsin isn't just the Dean-friendly confines of Madison. "Wisconsin's claim to fame is being a big progressive state, which traditionally would lean to Dean," Boffeli said. "But it's also a big blue-collar state, and the late support in Iowa for Edwards came from that working-class community."

Edwards seemed to have his mind very much on the blue-collar vote as he prepared to leave South Carolina for Tennessee Tuesday night. Although Edwards made millions as a trial lawyer, he is the son of a mill worker and grew up poor. In recent days, he has begun to compare his upbringing with Kerry's patrician past, just as he has begun to draw distinctions between Kerry and himself on trade issues, including NAFTA. And on Tuesday, he added a new riff to his stump speech, talking at length about a hypothetical 10-year-old girl who goes to bed hungry and hopes her father finds a job.

"She's one of 35 million Americans who live in poverty every single day, unnoticed and unheard," Edwards said. "Tonight we see her, we hear her, we embrace her. She is part of our family, and we will lift her up."

Merle Black, a professor of politics at Emory University, said that Edwards will have to find ways -- and NAFTA and poverty are examples -- to distinguish himself from Kerry if he hopes to make up any further ground against him. "In order for him to remain competitive, he will need to develop some issues that allow him to set himself apart," Black said. Even if Edwards can do that, however, Black said he believes that Kerry's momentum is so strong that Edwards is "running for vice president" now.

That's certainly the message the Kerry campaign would like to convey. In an interview with the Associated Press Tuesday, Kerry complimented Edwards for his win in South Carolina but said, "I think you have to run a national campaign, and I think that's the strength we have shown tonight. You don't cherry-pick the presidency."

Gary Copeland, a political science professor and director of the Carl Albert Congressional Research & Studies Center at the University of Oklahoma, likewise warned against reading too much into the success of Edwards and Clark Tuesday. He said voters in South Carolina and Oklahoma may have voted against Kerry only out of concern that the race is coming to a close too quickly.

"If South Carolina and Oklahoma and other states that looked like they were slanting toward Kerry five days ago get reversed, I think part of it is that we're not quite ready to coronate King Kerry," Copeland said. "Even if he would prove to be a good nominee in the long run, there are people who want to have him vetted a little longer. There are people who want to slow down, to have the campaign play out a tad longer."

That's exactly what Kerry doesn't want, of course, and it's exactly what Howard Dean needs. Although only about 10 percent of the delegates have now been selected, the fact remains that Dean is 0-9 in the first nine contests in the race. For Dean to have any hope of getting back into contention, he's needs time -- time an Edwards or Clark can provide by denying Kerry a lock on the lead. Dean was in Tacoma, Wash., Tuesday, campaigning before the Washington caucuses. He told supporters Tuesday would be a "tough night," but he said -- calmly, this time -- that he was "going to keep going and going and going and going and going, just like the Energizer Bunny."

Rep. Dennis Kucinich and the Rev. Al Sharpton also vowed to continue their campaigns Tuesday, despite the fact that neither broke into double digits anywhere. Kucinich drew more than two percent only in New Mexico and North Dakota; he couldn't even crack one percent in South Carolina or Oklahoma. Sharpton picked up just under 10 percent of the vote in South Carolina, where he made himself a fixture in black churches over the last several weeks, but he didn't do nearly as well anywhere else.

Only Joe Lieberman saw in the results a clear sign that it was time to give up. With lackluster -- and worse -- results across the board, Lieberman told supporters gathered in Virginia that "the judgment of the voters is now clear."

That was certainly the case for Lieberman's campaign, just as it was for Kucinich's and Sharpton's even though they chose not to listen. But for Kerry and for Edwards -- and, to a lesser degree, for Dean and for Clark -- judgment day is still to come.