Bands on the run

What ever happened to Kajagoogoo, Frankie Goes to Hollywood and A Flock of Seagulls? VH1's new "Bands Reunited" tracks them down and finds out -- and it ain't pretty. 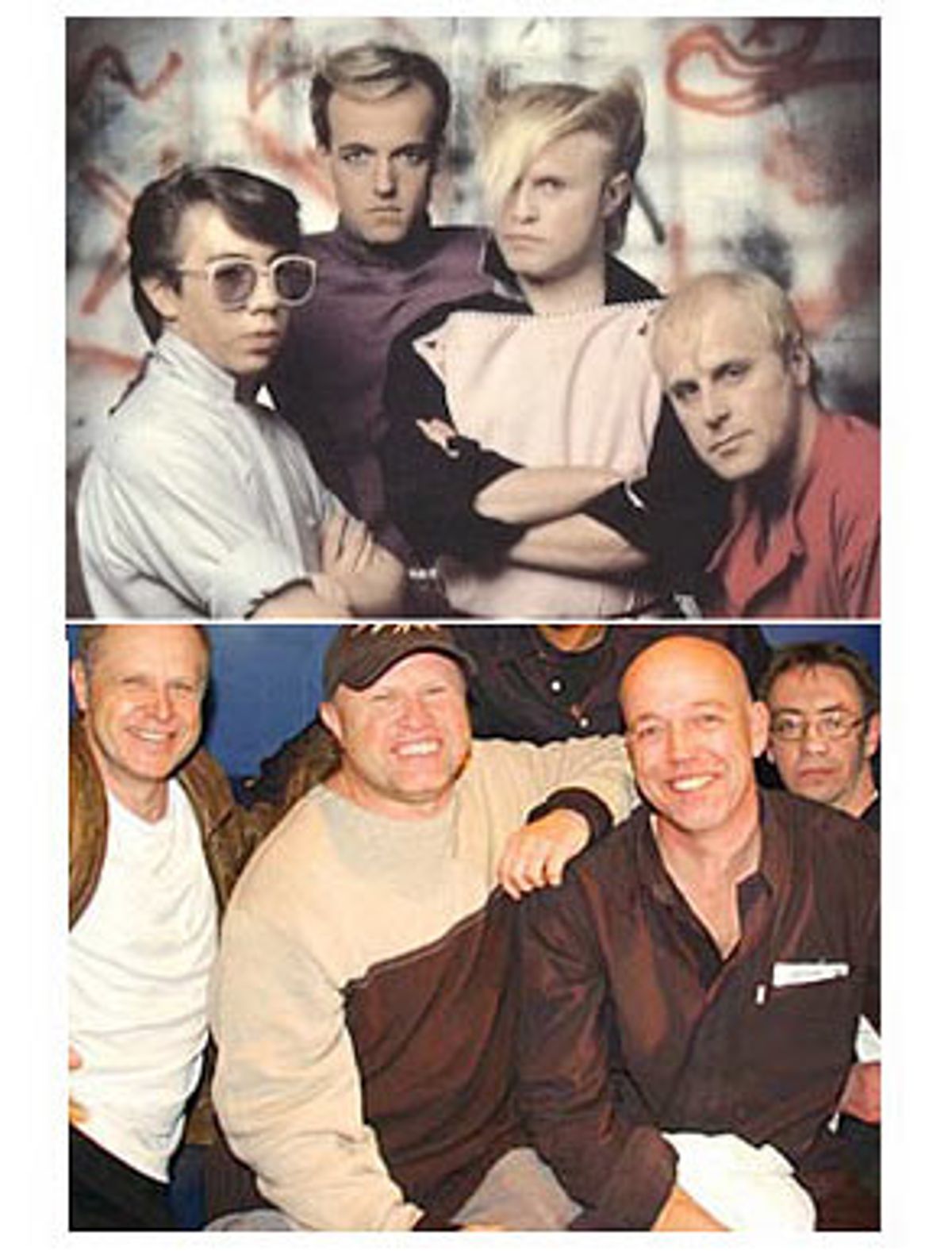 In 1976, Lorne Michaels did one of the funniest things I've ever seen anyone do on "Saturday Night Live," and he didn't take part in a skit or tell a single joke. What the young producer did was offer the Beatles the "generous" sum of $3,000 to get back together and perform on his show. In those days, rumors of a reunion were constantly in the air with promoters offering the former fabs as much as $100 million for a single concert. Michaels had no idea at the time how close his parody of those offers came to bearing fruit. As John Lennon later revealed in his famous Playboy interview, Paul McCartney happened to be in town and visiting at the Dakota on the night of April 24. The two were watching the show as Michaels made his offer and briefly toyed with the idea of calling a cab -- though, in the end, they decided they were too pooped to make pop-music history.

Another thing Michaels couldn't possibly have known at the time: Nearly three decades later, producers who probably hadn't even been born yet in 1976 would be making riveting television by doing essentially the very same thing: VH1's new "Bands Reunited" debuted on Jan. 19, and it is, without a doubt, the greatest show on earth.

What could possibly be more all-around entertaining than a program on which the members of long-defunct ensembles are tracked down one by one, isolated in a room with former band mates they haven't seen in years (due in many cases to still-raging feuds) and coerced into reliving their rock 'n' roll glory days as viewers recoil in amazement at the amount of hair lost and weight gained? One-time Vancouver VJ Aamer Haleem does the hosting honors, a position that demands a high degree of both music-industry knowledge and diplomacy. According to VH1's Web site, "shock, embarrassment and sometimes anger are just a few of the reactions" Haleem encounters as he "shows up unexpectedly and surprises each band member with the possibility of reuniting."

The concept is pure genius. And the show's creators are smart enough to understand they walk a fine line in terms of the acts they unearth. Dig up a group from the late '60s and you run the risk of your trail leading you straight into a nursing home or, worse, that big jam session in the sky. That'll unplug the fun in a hurry. Instead, the producers of "Bands Reunited" tend to target long-dormant headliners from the '80s. This way, the former pop stars may be all but unrecognizable but at least they're not dragging around oxygen tanks.

Then there's the bonus that so many bands from that period now appear utterly ridiculous. What they may have lacked in talent, acts like A Flock of Seagulls, Dramarama and Klymaxx tried desperately to make up in hairspray and polyester -- which makes them the perfect subjects for a show like this. The whole world looks at them as musical laughingstocks, but raise the possibility of getting together to make one night's worth of music -- without pay -- and you've never seen a bunch of people take themselves more seriously.

The British has-beens are by far the worst when it comes to this sorry behavior. In the episode on Kajagoogoo (1983's "Too Shy"), the first four members of the synth pop quintet contacted agreed to reunite but expressed serious doubt that lead singer Limahl would consent to the proposition. After all, the four had arranged for their manager to boot him out of the band without explanation nearly 20 years earlier, effectively ending his career. Indeed, when confronted by Haleem about the possibility of burying the hatchet, the vocalist becomes visibly agitated. To the fellow's credit, though, he decides to let bygones be bygones and breaks down and weeps only three or four times in the course of the culminating live performance. Hey, nothing says rock 'n' roll quite like a blubbering middle-aged man.

The installment featuring Frankie Goes to Hollywood (1983's "Relax") doesn't have quite so happy an ending. That's because lead singer and self-appointed serious artist Holly Johnson is a gwumpy little man whose sense of humor seems to have been surgically removed in the decades since the homoerotic dance-pop outfit's ultra-brief heyday. Never mind "Relax." Someone should tell this guy to "Chill."

You had to feel sorry for the other members of the band. Sort of the Brit version of the Village People, only with way, way more attitude, Frankie was pretty much a sensation that came and went overnight and you could tell these guys were psyched to be receiving any kind of media attention. Like their counterparts from Kajagoogoo, the group's foot soldiers seriously doubted their commander in cheese would deign to join them for a march down memory lane. Johnson stunned everyone by agreeing to come to the initial confab but apparently did so only to make that much more disheartening his refusal in the end to engage in musical activity of any kind. A few self-important proclamations about the impact his art has had on the world and off he sashayed with his poodle -- or whatever it was -- padding along at his heels. Horrid twit. Great TV.

The installment on A Flock of Seagulls -- 1982's "I Ran (So Far Away)" -- is one of my favorites. The oft-maligned new wavers arguably are remembered better for their hysterical hairdos than for any of the songs they recorded. Frontman (and then professional beautician) Mike Score may have been the most femmed-out figure in the history of popular music. He made Little Richard look like Ike Turner.

Which is why it's so funny to watch him in his present incarnation. The guy's positively burly! I mean it. He has to be closing in on 300 pounds and dresses like a Hells Angel. One of the show's most entertaining features, a split screen in which you see the band as they were in their early MTV videos and performing the same songs today, is used to particularly cruel and hilarious effect with A Flock of Seagulls. In fact, if these guys decide to stay together, they should change their name to A Flock of Meat Loafs.

The episode's highlights? Hearing members of the group speak gravely about how they were driven apart by "artistic differences." And before that, at the beginning of the show, watching the one-time demigods ask their bosses for permission to miss a few days of work.

In the episodes I've seen, ensembles from this side of the pond have tended to take themselves and their moment in the spotlight less seriously than their colleagues from the U.K. Remember Romeo Void (1981's "Never Say Never")? Perhaps having learned a lesson from its encounter with Huffy Holly, the show's crew tracked down full-figured vocalist Debora Iyall first and secured a commitment before rounding up the rest of the retired post-punkers.

All five reacted to the ambush with good spirits and a sense of fun. Members of RV were clearly excited by the prospect of playing together again. The group has even managed to remain one of the few in the world that's apparently 100 percent feud-free. Nonetheless, a true reunion wasn't meant to be. Just when it looked as though nothing could possibly spoil the party, Haleem tracked down reclusive saxophonist Benjamin Bossi and listened in horror as the withered musician ticked off a laundry list of personal tragedies. On top of serious problems with drug and alcohol addictions, the highly regarded sax player revealed that he's been taken out of the game by an incurable case of tinnitus, the same form of hearing damage that afflicts Pete Townsend.

To hear Bossi tell it, the toll taken by years of playing in front of blasting amplifiers was exacerbated by his substance abuse. The worse the ringing in his head got, the more booze and pills he used in an attempt to mask the condition's symptoms. The bottom line: The poor guy can't afford to risk losing what little hearing he has left. So he joined his old friends on the day of the reunion and gave them all a big hug but had to excuse himself when it came time for everyone to pick up their instruments. The group soldiered on with the help of a session player but, sadly, one member of Romeo Void had to say "never" after all.

You see what I mean. "Bands Reunited" is a basic-cable bonanza for music fans, reality fans, and anyone who's ever stumbled across a long-forgotten eight-track or cassette and wondered what happened to the group that recorded it. Similarly fascinating sagas are already in the can detailing the rise and fall of Extreme, Berlin, Squeeze and the Alarm. Of course, plenty of shows (VH1's own "Behind the Music," for example) already chronicle the rise of famous bands. A show documenting their fall is long overdue. When people make the journey from world tours to working day jobs, there's guaranteed to be drama, wreckage, lessons learned, and human interest in spades. And, with so many expired acts awaiting postmortem, it looks like this is a show that will go on. And on.