The real-life triumphal tale of the 1980 U.S. hockey team may be rousing, but this movie based on it is slushy and sadly personality-free 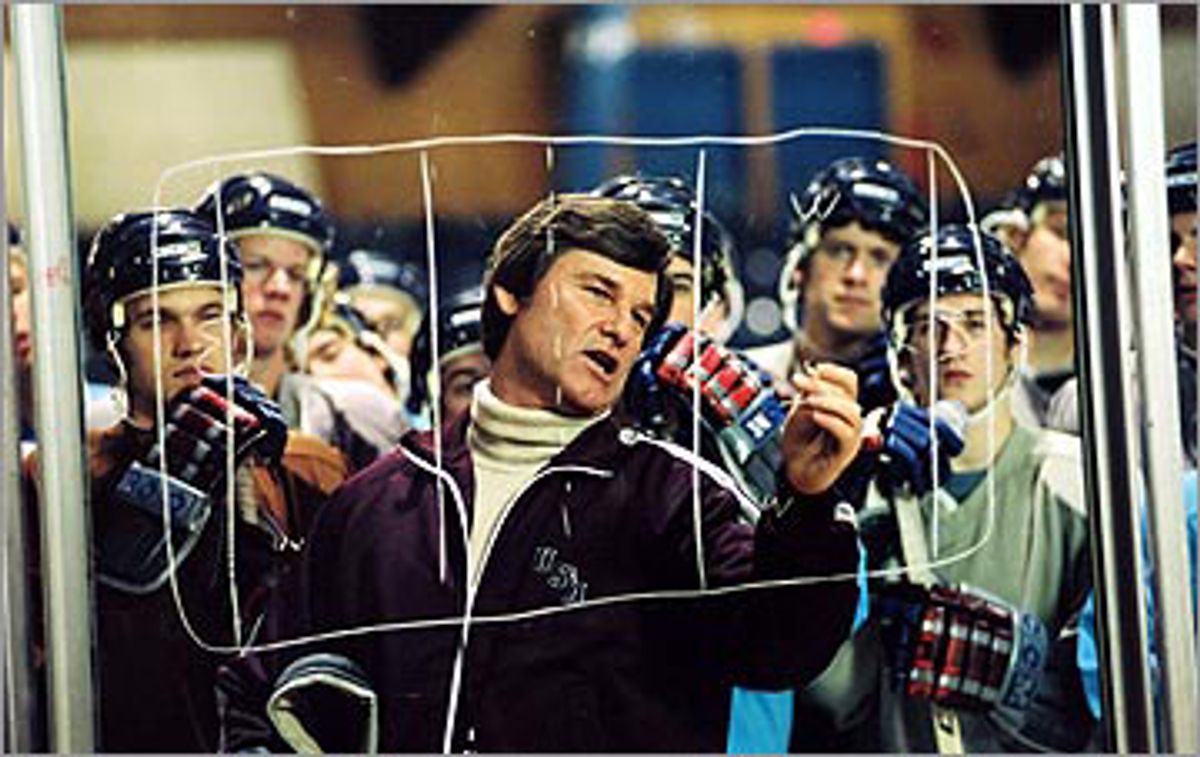 The years 1979 and 1980 represented a dismal time for America: the gas shortage. The hostage crisis. Plaid pants. We were a nation in need of hope. Or at least better haircuts. According to Gavin O'Connor's sports fable-cum-motivation seminar "Miracle," the U.S. hockey team's gold-medal victory at the 1980 Winter Olympics, in Lake Placid, was just what the country needed. A bunch of scrappy kids who'd barely played together were handpicked by a tough coach, Herb Brooks (here played by Kurt Russell), who trained the dickens out of them. After learning the value not just of teamwork but of being a "family," these guys were able to defeat the surliest and best hockey team in the world, the Soviets, many of whose members had been playing together for more than 10 years.

There's no way around it: The victory makes for a rousing story. At the time, even people who couldn't have cared less about hockey were intrigued by the chutzpah of the U.S. team. And since the then-Soviet Union was at the time both an enemy and a mystery to us, the U.S. team's astonishing win was loaded with patriotic symbolism as well.

Even so, "Miracle" slathers the metaphorical sauce on a little too thickly, particularly since, in the end, it ends up being little more than a pedestrian tale about all-American stick-to-itiveness. I could see "Miracle" easily being used in business-success seminars. There's also more than a whiff of military masculinity to it. Brooks, as played by Russell, whips his team into shape and, the movie implies, turns them into real men. He announces early on that he's the guys' coach, not their friend. He's a muscular fountain of manly sayings, things like "I'm not looking for the best players -- I'm looking for the right ones," "Win, lose or tie, you're gonna play like champions," "This can't be a team of common men, because common men go nowhere," and (my personal favorite), as he's urging them to strengthen their skating muscles, "The legs feed the wolf, gentlemen" -- which, particularly in a sport like ice hockey, does make sense, even if it only hits you on the rebound.

"Miracle" is big on slogans, but low on personality. Few of the players emerge as distinct characters, perhaps partly because in casting the movie, O'Connor sought kids who could actually play hockey, as opposed to actors who'd have to be rigorously trained -- a choice that makes sense in terms of the film's action sequences, but perhaps flattens it out elsewhere. The exception is goalie Jim Craig (played with diamond-in-the-rough sensitivity by Eddie Cahill, who has had a recurring role on "Friends"). Goalies tend to be the most beloved figures in hockey, probably because most of us can sympathize with the task they're up against. (If you think you've got a rough job, what do you suppose it's like to have small discs of hard rubber flying at you all day, at speeds great enough to kill you?) They're also saddled with potentially heavy feelings of responsibility and guilt when the puck slips by them. In "Miracle," Cahill manages to convey the kind of romantic soulfulness we like to imagine in our best athletes (and which, in some, really does exist).

But as Brooks, Russell doesn't give us much of a sense of the man behind the tough guy. That's probably as much a fault of the script (written by Eric Guggenheim) as anything else. As a high-schooler -- the last time I paid attention to sports of any kind -- I remember seeing stern, disciplinarian coaches in action and wondering what they were like at home with their wives and kids. Did they bark demoralizing orders at them, too? Or were they pussycats, glad to quit the act so they could come home and be themselves? Russell gives you glimmers that Brooks (who died shortly after principal photography on "Miracle" was completed) was more of the latter sort. Still, even though we get a few scenes showing us how Brooks connects with his wife, Patty (Patricia Clarkson, who's fine, as always, in a not particularly distinctive role, and has to wear some pretty bad helmet hair to boot), we don't get much of a sense of what kind of person he was, beyond the fact that he had character and could help build it in others.

Then again, maybe that's just a reflection of how hard it is to make a movie about the nebulousness of what we call "leadership qualities." (I'd argue that Peter Weir's "Master and Commander" gets as good a handle on that slippery concept as any picture made in the past 10 or even 20 years.) But "Miracle" does have some style: The hockey sequences are well shot (the cinematographer is Daniel Stoloff) and often flat-out exciting. One of the great pleasures of ice hockey is marveling at how figures dressed up like the Michelin Man can glide so nimbly, so gracefully and so fast, on two skimpy little blades. "Miracle" captures that pleasure, as well as some of the hard knocks (and high tempers) that make it such a rough game. And Stoloff pulls off one fantastic novelty shot, in which a puck flies directly at the camera lens. I confess, I flinched. At moments like that, "Miracle" feels most alive.

Still, the best and most moving part of "Miracle" may be the closing credits, in which we see pictures of the actors accompanied by the names of the real-life characters they played and a strip of type that tells us where they are now. We see these youthful, buoyant faces -- faces of men who, in real life, are now in their 40s -- and learn that they're doing regular jobs, just like most of the rest of us: Some of them work in professional hockey organizations, or coach college teams. Others work in real-estate sales and development, management consulting or financial planning -- good jobs, but not necessarily glamorous ones.

The point isn't that these vibrant young men went on to get dull, average jobs, or even good, well-paying ones. It's simply that they went on to grow up, to do all the things that many fine young athletes go on to do after they leave school. You get the sense that these guys grabbed the most out of an exciting time in their lives, and you're glad they had that moment of youthful glory.