John Kerry dominated Michigan and Washington on Saturday. But will it be possible to please both big industrial unions and environmentalists? 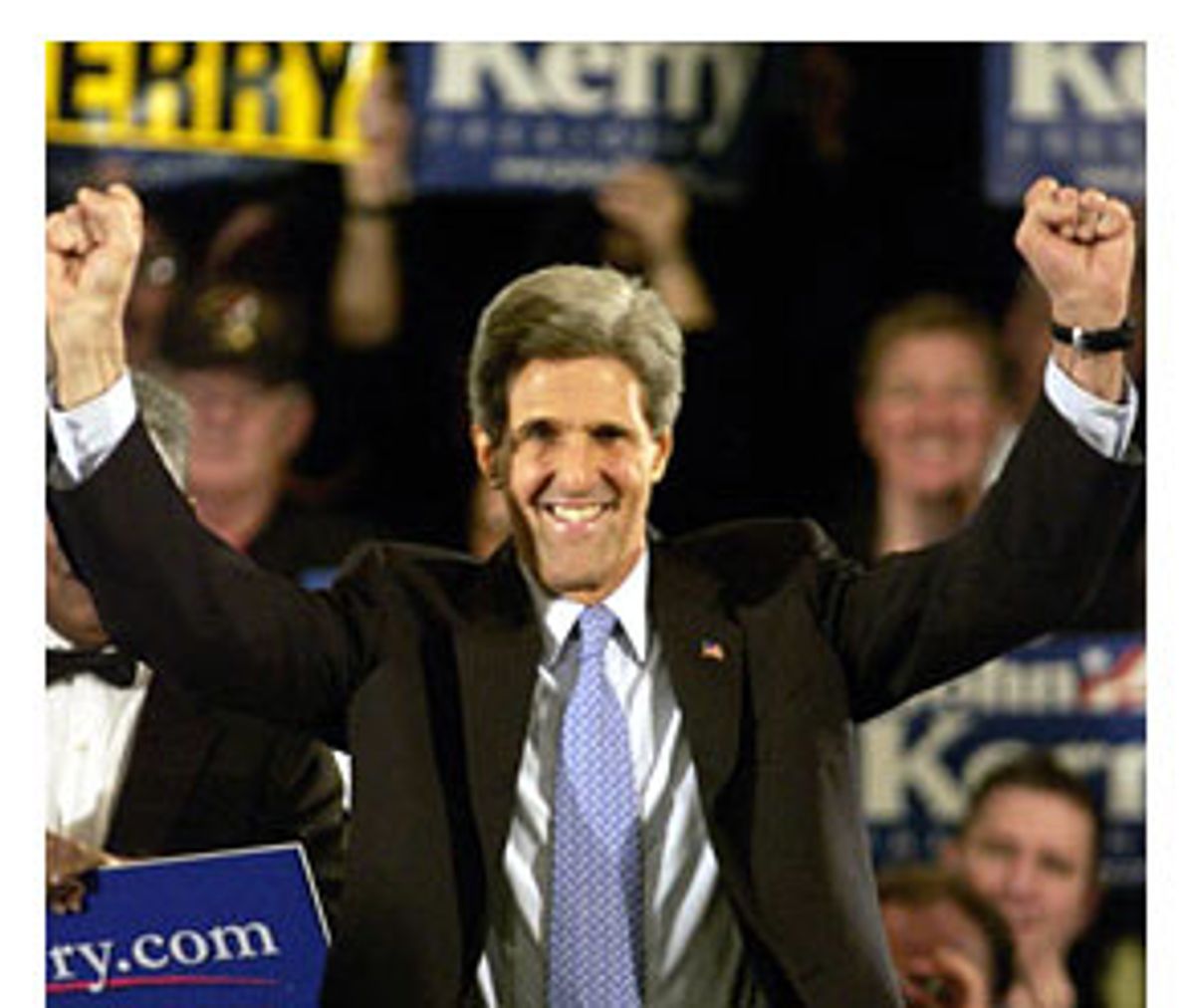 A steady stream of Democrats flowed into the caucus sites in Greenville, Mich., on Saturday, and when the polls had closed, the voters in this economically anxious small town of north central Michigan shared the strong consensus of voters from all parts of the state: Massachusetts Sen. John Kerry would be the best candidate to take on President George W. Bush in the fall.

"There were lots of anti-Bush comments and anger all day," said the Rev. Vince Lavieri, chairman of the party in Montcalm County, where Greenville is located. "But everybody seemed upbeat. They seemed to be thinking, now we're getting this process going. We're beginning to do something." Defeating Bush was clearly that something.

Yet as Kerry's solid victories in the caucuses in both Michigan and Washington consolidated his front-runner position, some political analysts worried that Kerry's support might prove to be a bubble that could be pricked, much like Howard Dean's early support, and that the damage might come after the primary season. Most voters are not very familiar with Kerry or his record, and the accelerated primary schedule and absence of a stiff challenge from a single leading opponent have let Kerry through without the kind of tough review that could test whether he really is the strongest candidate.

"This was an electability question," said Stephen Reck, political coordinator for a public employee local of the Service Employees Union, which endorsed Dean. "People are looking at Kerry, from a military standpoint especially, and thinking he can go toe-to-toe with the president on these issues. Given the fact that Kerry saved that one guy's life, the timing of that coming out, that picture was burned in voters' minds when they saw him pulling that guy out of the water. But I think he's going to be facing what Dean had, the barrage of questions, [questions about] campaign contributions, the record of 20 years of service [in the Senate], particularly when you have sound bites driving the whole thing. It's usually not congressmen but governors who get elected. They don't have those voting records over years that people can distort and take out of context and run with. That's what I'm concerned about, that Kerry will come under scrutiny for all his votes."

Kerry's victory was decisive in Michigan, as it was in Washington. Kerry won 52 percent of the votes in Michigan, with Dean winning 17 percent and Edwards 13 percent.

But the numbers could be misleading: Kerry could still have problems in Michigan because of his past record of voting for NAFTA and similar global trade and investment deals. A voter backlash against those votes could be deeply damaging to Kerry, not only in Michigan, but in states like Wisconsin, Ohio and Pennsylvania that are also expected to be crucial to Democratic hopes in November. Such problems could be compounded in Michigan because of Kerry's support for higher Corporate Average Fuel Efficiency (CAFE) standards for automobiles and trucks.

The difficulty of such issues for the front-runner was evident in Washington, too. Kerry won 49 percent of the vote there, with Dean winning 30 percent and Rep. Dennis Kucinich scoring his best result to date with 8 percent. There, Kerry's environmentalism -- and an early endorsement by the League of Conservation Voters -- undoubtedly helped. But if he backs off on fuel standards as he apparently promised Michigan Gov. Jennifer Granholm, who endorsed him, he could alienate the environmentalists.

There's likely little time left for Democrats to give Kerry a closer look. While Dean's second-place finishes were among his best showings, only a month ago he had been the front-runner in both states. Even after his losses in Iowa and New Hampshire, his campaign thought he might be able to beat Kerry in either state. But Dean stopped campaigning earlier in the week in Michigan; he's moved on to Wisconsin for the Feb. 17 primary, but has indicated he could withdraw from the presidential race if he doesn't win there.

Even before the results came in on Saturday, Dean lost the endorsement of the 1.4 million-member public employees union, AFSCME, whose backing had given him one of his biggest boosts last fall. With U.S. Rep. Dick Gephardt, the favorite of a group of more than 20 unions, now endorsing Kerry, it is likely that many unions that had supported Gephardt or had remained neutral may join Kerry's bandwagon. (The small but feisty apparel and textile union, UNITE, endorsed Edwards late last week.)

Kerry won in every part of Michigan, including largely African-American Detroit, where Rev. Al Sharpton drew roughly one-third of the votes. Despite his record supporting free-trade deals, Kerry also won nearly half the votes in the area around Greenville, where there was deep distress over the recent announcement that an Electrolux refrigerator factory will move to Mexico in 2005, a devastating blow that could cost the area thousands of jobs.

But in a reflection of local anger about the impact of global trade and investment agreements like NAFTA, Kucinich won 11 percent of the vote, nearly four times his statewide average. On Friday before the caucus, Kucinich appeared at a rally at the local United Auto Workers union hall, even though the UAW international union, which is neutral in the race, tried to discourage his use of the hall. Some of the union's local leaders supported Kucinich, but the sentiment at the rally was unequivocal on two points underscored by bumper stickers distributed in the parking lot: "Nothing Sucks Like Electrolux" and "Let's Get Rid of the Son-of-a-Bush."

Both Washington and Michigan are considered potentially tough battlegrounds in the fall election, even though Michigan has gone Democratic in the past three presidential elections and Washington has voted for the Democratic candidate in the past four. Kerry's strong showing in Michigan, however, doesn't mean he has a lock on the state. Although national polls reported in Newsweek show Kerry narrowly ahead of Bush at this point, "All the polls in Michigan up until a month ago when Dean collapsed and Kerry came on strong showed Bush way ahead of Dean, Kerry, anybody," cautioned Bill Ballenger, editor of the Inside Michigan Politics newsletter.

"It's way too early [to predict the outcome]. The idea that Michigan is some Democratic state is misguided. Memories are very short. In five straight elections from 1972 to 1988, Republicans won. Four years ago, most people thought Michigan would be very close, but Gore ended up winning [51 percent to 46 percent over Bush]. The power of incumbency is worth a lot. Who is the nominee? What is his record? How does he play in Michigan?"

Although Kerry voted for NAFTA, many workers, union leaders and Democratic politicians from Michigan -- such as former Rep. David Bonior -- have been ardent critics of those deals. Gov. Jennifer Granholm reportedly said that Kerry promised to "fix" NAFTA if elected, and he has joined with the mainstream of the Democratic candidates in arguing that future agreements must also protect workers' rights and the environment. NAFTA critics certainly won't be attracted to Bush, but they might feel less than enthusiastic if they don't believe Kerry really will change course.

Kerry faces a similar dilemma on some environmental issues. "Major [Michigan] Democratic politicians, no matter how liberal -- [U.S. Sen.] Carl Levin, [U.S. Sen.] Debbie Stabenow, [Rep.] John Dingell -- they all fight those CAFE standards," Ballenger said. "Every politician and member of the elite will be on the same note: Don't make it tough for us on CAFE standards. Union members may not feel that way and think they should be tough. But in Michigan you just don't go around preaching, well, we've got to buck up those CAFE standards. Kerry is already backpedaling, seriously."

Kerry's record on automobile fuel efficiency may not play as badly with voters as with politicians. A public opinion survey conducted for the Sierra Club in Michigan four years ago indicated that 74 percent of union members favored higher fuel-efficiency standards. Republicans are sure to beat up on Kerry on this issue in Michigan if he's the nominee. But too much defensive backpedaling on the issue could hurt Kerry with important environmentalists.

"The idea that Kerry is a great candidate or nominee from Michigan ain't necessarily so," warned Ballenger. "It may prove to be that way if Kerry gets in here and connects with voters." But neither Kerry, who held a series of rallies on the eve of the Michigan caucus, nor any other candidate campaigned much in Michigan after polls showed Kerry surging ahead. Without much of a fight, turnout was much lower than party officials had hoped, especially after they introduced the option of Internet voting for the caucus. The party predicted that as many as 400,000 members would participate, doubling the record in 1988, when Rev. Jesse Jackson upset Gov. Michael Dukakis and won the caucus vote. But only about 163,000 Democrats did take part, the majority by traditional balloting, in the second-best turnout since Michigan Democrats switched from a primary to a caucus.

Without a vigorous campaign and television advertising, Kerry may not have been able to use the caucus to establish his identity early with Michigan voters. "It's by default," Ballenger said. "Kerry is walking into it without campaigning, spending money or defending himself on tough issues. He's gotten away with murder." Although the party leaders and voters seem to be coalescing around Kerry quickly, he will need to work hard even after any decisive victory to generate enthusiasm among core Democrats before Republicans can put him on the defensive with his political base.

Without such work, Kerry's early and lopsided victories might prove hollow. There may be strong anti-Bush sentiment, but Kerry has a long way to go to win the hearts and minds of core Democrats and to prove to swing voters, too, that he is indeed the candidate who can defeat Bush.

David Moberg is a senior editor at In These Times and a fellow at the Nation Institute.