Land of the lipstick lesbians

Showtime's dramedy "The L Word" gives us a cast with an impossibly glossy, positive and superficial sheen. 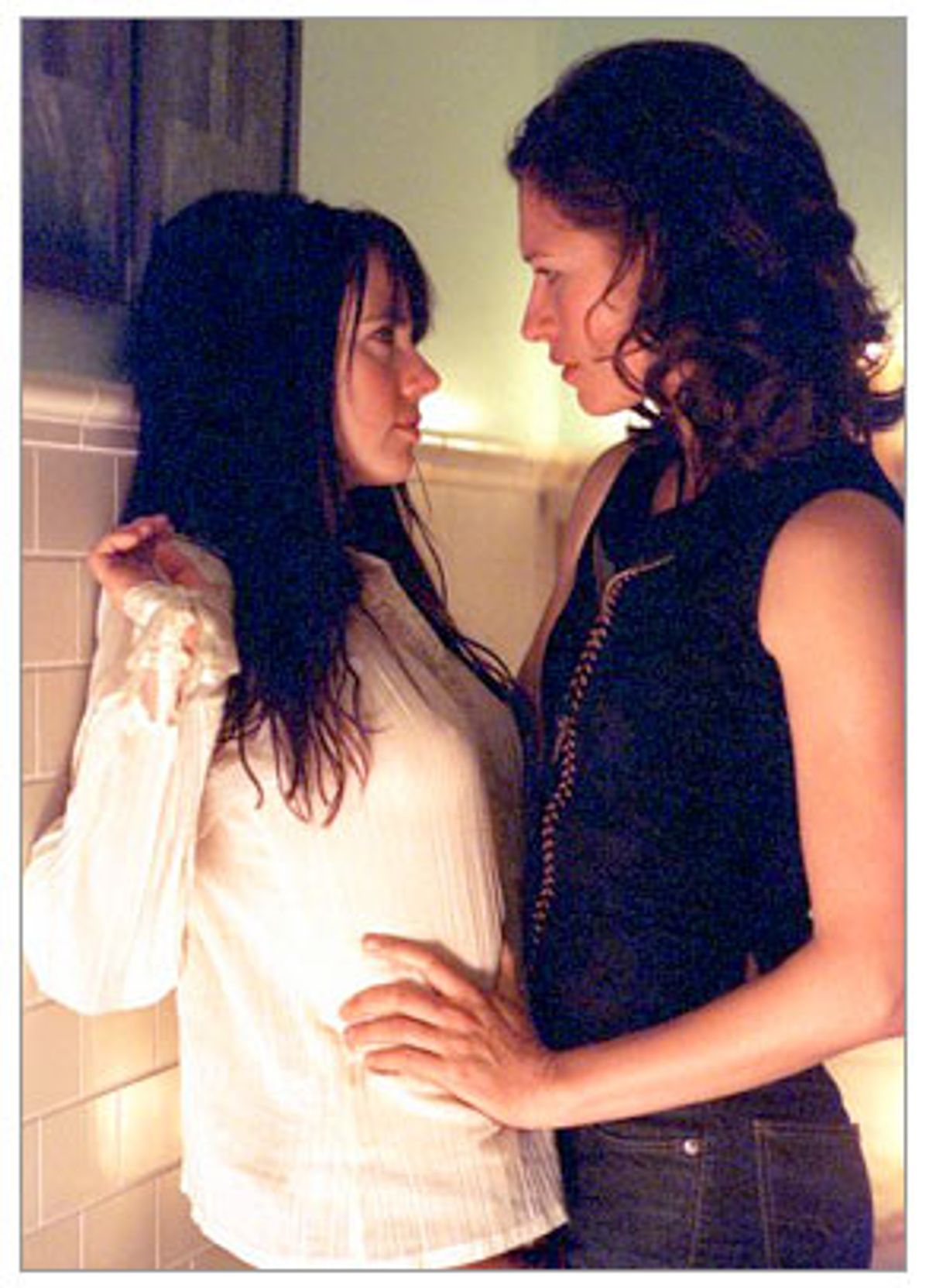 When you think of Los Angeles, do you think of palm-tree-lined streets, quaint craftsman homes, and sun-drenched coffee shops filled to the brim with scorchingly sexy lipstick lesbians?

No? Well, you may not know it, but there's a utopia of highly evolved, wildly beautiful gay women in Los Angeles, depicted vividly in Showtime's new drama "The L Word" (Sundays at 10 p.m.). These women spend their days gossiping over herbal tea or reading each other's short stories or descending on a country club to determine the sexuality of a certain tasty sous-chef. From gorgeous coffee shop owner Marina (Karina Lombard) to pro tennis player Dana (Erin Daniels), each one of these women is slim, stylish, creatively fulfilled and emotionally well-balanced. Thus, any drama must arise not from flaws or limitations or, god forbid, anxieties specific to lesbians, but from the world outside their warm utopian microcosm.

Thus, longtime couple Bette (Jennifer Beals) and Tina (Laurel Holloman) are both young and beautiful with minor relationship challenges that aren't remotely specific to a relationship between two women. Although they're trying to have a baby together, neither shows any ambivalence when parents disapprove or when sperm donors back out, except when it takes the shape of a cookie-cutter, one-size-fits-all emotional unavailability. Another character, the free-wheeling Shane (Katherine Moennig), beds a steady stream of women, promises she'll call, and then doesn't; she's like any stud we've seen before, except she's really, really nice about it. The only truly dysfunctional character on the show, Jenny (Mia Kirshner), is engaged to a man, but is having an affair with a woman, and won't admit the truth to herself or to her fiancé. She's only messed up, we're led to believe, because she's trapped in the wrong life.

"The L Word" throws in plenty of zany "Sex and the City"-style antics that make comparisons to that show inevitable even without Showtime's ad campaign ("Same Sex, Different City," the slogan goes). But "The L Word" seems so intent on representing lesbians in a flattering light it winds up in a toothless nowhere land of cute quips and flat characters. While the show's primary focus is on realistically depicting the lives of a diverse group of lesbians, these characters feel remarkably similar to each other, mostly because outside of their surface identities -- magazine writer, gallery curator, athlete -- they don't seem to have unique traits, perspectives or problems that might draw us in. Quarrels are resolved politely without further exploration, and tense dialogue melts into pleasantries, glossing over major conflicts. Even when Bette and Tina aren't getting along, they act like a dreamy pair. Shane and Dana clash amiably but never discuss anything of real weight. The only scenes that feel dangerous and real are the ones that involve straight couple Jenny and Tim (Eric Mabius), presumably because there's no need to pull punches.

The show also circumnavigates any and all clichés associated with lesbians. It's understandable that they might not want to populate their coffee shops and bars with big women sporting crew cuts and biker boots, or explore such clichés as the much older woman seducing the younger woman, or the lesbian who suddenly marries a man in order to escape her fears of existing in a marginalized realm. But by completely sidestepping anything that might seem remotely stereotypical (or negative), they end up with stories that feel a little dishonest and not nearly textured or involved enough to keep our interest. All people, gay, straight and bi, are far more flawed and conflicted than the writers of this show are willing to admit.

Why didn't Showtime take its cue from a show like "Six Feet Under," which manages to explore a wide range of characters struggling for happiness against difficult circumstances? Creator Alan Ball takes an unflinching look at the perils of straight married couples, gay couples, older women, artists, teenage girls and others without shying away from their sometimes awkward and embarrassingly demographic-specific troubles, from Keith's annoyance with David's camp-happy friends to Nate's restlessness with his ultratraditional role as a new father and husband.

All relationships are challenging in their own peculiar ways. Even fluffy "Sex and the City" isn't afraid to cast a harrowingly harsh light on the heterosexual female. So where's the woman afraid of introducing her butch girlfriend to her parents? Why not have just one character who's not a Size 6 or under? How about one woman who's ambivalent about how she could ever fit in with the lesbian scene? Daniels played this role in the pilot, but they inexplicably made her far less confused and cynical in subsequent episodes. Now that she's made her choice (women), she suddenly has a consistently sunny disposition, is madly in love, and the only thing causing her real trouble is her handlers, who don't want word to get out that she's gay. It's a difficult situation, so why does Dana have to handle it all so perfectly? After she brings her faux-boyfriend to an event instead of her girlfriend, she later apologizes profusely and promises her girlfriend that she'll come out. What about those individuals in the spotlight who absolutely refuse to come out, for fear of the impact it might have on their careers? How do they ever find love, or handle it when they do? Wouldn't that make for a more challenging and, consequently, far more dramatically compelling story line?

If your show is primarily focused on sexuality, as "The L Word" is, it really doesn't make sense to make the source of every conflict over sexuality external. Either broaden your scope ("Six Feet Under" isn't just about death, and "The Sopranos" focuses more on married life than on the mob) or deepen your portrayal with a more courageous, unflinching exploration of your subject, warts and all. Because the real disappointment of "The L Word" lies in its wasted potential. A whole universe of rich, complicated characters and fresh plotlines could be mined here. Now and then, when a scene or a bit of dialogue breaks past the surface to deeper, richer groundwater swirling underneath, you catch a glimpse of the possibilities of this unique landscape.

Yet, by refusing to delve into anything confusing or difficult that's specifically associated with relationships between two women, "The L Word" feels like a fantasyland, imagined and utterly weightless. While you can't blame them for their self-protective stance, ironically, by keeping their characters locked up in a sunshiney utopia of idealized traits and whitewashed scenarios, the creators of "The L Word" prevent us from understanding or feeling for these women at all.

Sex And The City Television