There he goes again!

Matt Drudge and the GOP smear machine are back in the Democrats' pants. 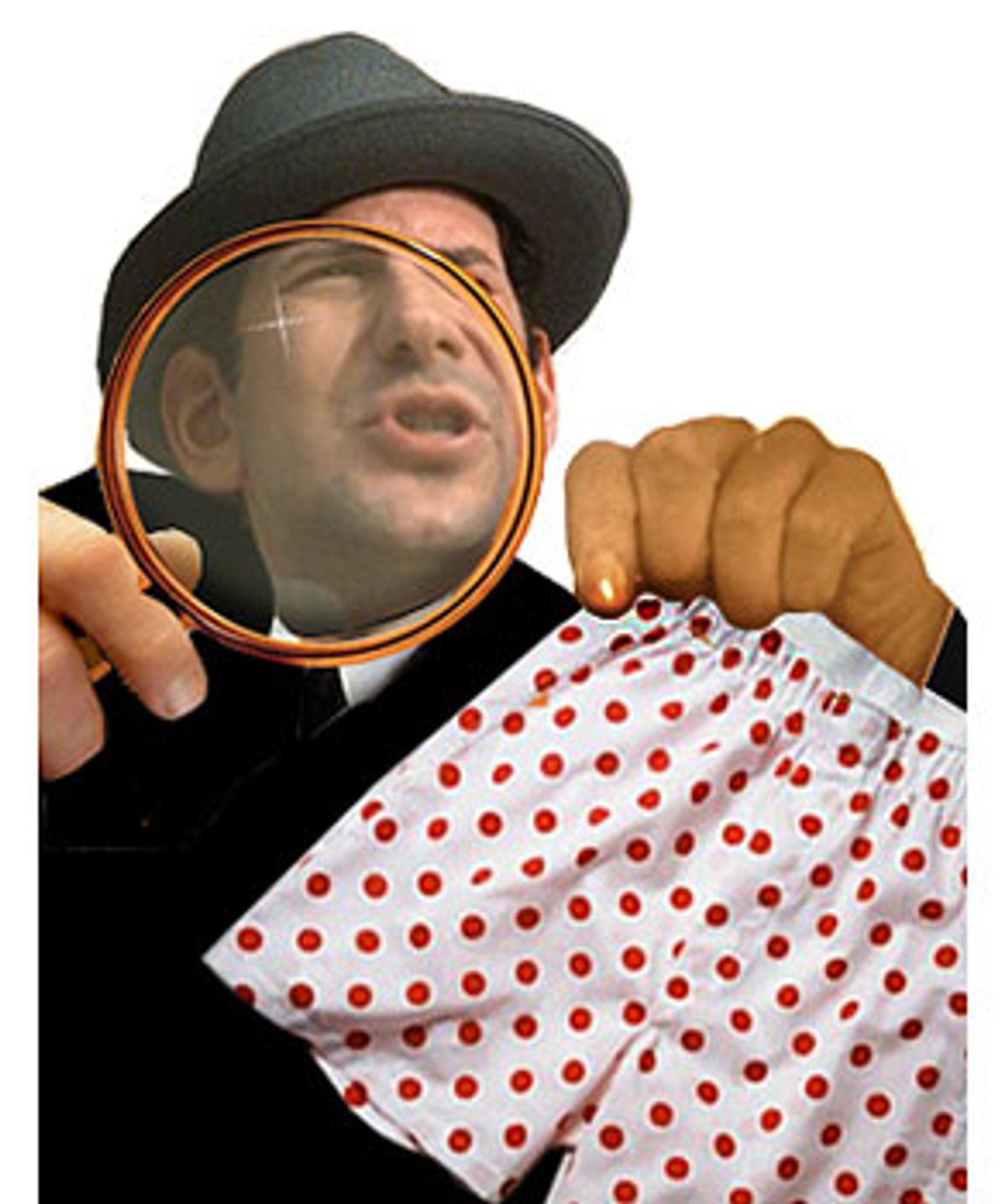 Is American politics suddenly returning to the bad old days, when Washington journalism became frenzied with sheet sniffing and keyhole peeping? That seems to be the default program of the right-wing media machine whenever Republican poll numbers sink into the red zone.

Late Thursday morning -- with George W. Bush's credibility damaged on several fronts as reporters demanded answers to questions about his National Guard service that should have been asked years ago -- the Drudge Report defamed his leading Democratic challenger with a "world exclusive" smudge of personal dirt.

Vague and unsourced but hyped to the maximum by Drudge, the brief item sounded disturbingly familiar. The Internet gossip accused John Kerry of "recent alleged infidelity" with "a woman who recently fled the country," adding that a "close friend of the woman recently approached a reporter with fantastic stories." The same item ran an "off the record" comment attributed to retired Gen. Wesley Clark, who was quoted as saying, "Kerry will implode over an intern issue." Major news organizations from ABC News to the Associated Press, warned Drudge, were all over the story.

By evening, however, no major news organization had run with it, though many were chasing it. Perhaps frustrated, Drudge put up an additional item eight hours later, with a few more details about the alleged relationship. "Unlike the Monica Lewinsky drama, which first played out publicly in this space, with audio tapes, cigar and a dress, the Kerry situation has posed a challenge to reporters investigating the claims," his later item explained. Drudge also quoted a "top source" as saying: "There is no lawsuit testimony this time [like Clinton with Paula Jones]. It is hard to prove."

But the kind of proof usually required by national news organizations isn't what Drudge needs in order to put innuendo into circulation.

Somewhat conveniently, Drudge had earlier posted an item that blamed the sudden smudging on a disgruntled Democratic consultant named Chris Lehane, who had been fired by Kerry before going to work as a communications aide to Clark. That second item was later taken down without explanation. By then, of course, this Drudge-drama was already "rocking" Democrats -- and delighting Republicans -- across the nation, at least according to Drudge.

The template was pure Monica: Intern has affair with married politician, is betrayed by a "close friend," and finally exposed by the pliant Drudge.

So far, however, the mainstream media has yet to touch the Drudge item, despite heavy promotion by Rush Limbaugh and the Wall Street Journal's Opinion Journal Web site. Whoever lit this match must have been disappointed when the story that smoldered in newsrooms during the afternoon failed to blaze into a firestorm by early evening. The only exception, so far, is a daily newspaper in Scotland.

(Kerry refuted Drudge on "Imus in the Morning" today, as Don Imus pointed out people were talking about the allegations Drudge was spreading, but no news organizations were actually reporting on them. "Well, there is nothing to report. So there is nothing to talk about. I'm not worried about it. The answer is no," Kerry said.)

Over the years, Kerry's private life has generated its share of gossip. He was a divorced, socially active single man for several years before he remarried. No woman has so far stepped forward to embarrass him in any way -- and the only published report even remotely hinting at marital infidelity is a 6-year-old unfounded clipping from the Boston Herald. Sources in the Kerry camp insist that the Drudge story has no foundation, although they have been predicting since Bush's numbers began to drop that the White House would soon dump its opposition research on their candidate. It may also be worth noting that the Massachusetts senator underwent surgery and radiation treatment last year for prostate cancer.

Was the Drudge item a late hit by an angry Democrat seeking revenge, or a plant by desperate Republicans hoping to distract attention from the president's problems? Lacking proof, the most pertinent questions are the standards of forensic inquiry: Cui bono (who benefits)? And who had the motive, method and opportunity?

Drudge's allegations set off a chain of speculation. Certainly some Democrats wondered if the evidence-free item came from Lehane, who declined public comment this afternoon. Lehane has a reputation as an often rough operator, and that may provide a pretext for Drudge to smear him, too. Following Lehane's dismissal from the Kerry campaign some months ago, the tone of his remarks about his former employer occasionally sounded vengeful. If Clark actually uttered the nasty remark as quoted by Drudge, the general might have heard such rumors from his sharp-edged consultant. But then if Clark believed Kerry was about to "implode," he might not have dropped out of the primary race -- or decided to endorse the Massachusetts senator, as he is expected to do on Friday.

A source close to Lehane vehemently denied to me that Lehane had peddled any rumors about Kerry -- and turned attention back toward the White House as Drudge's likely source. "My assessment is that this is not merely a serendipitous event," he said.

The Drudge item blaming Lehane quoted Craig Crawford, a former Democratic operative who now works as a consultant and columnist for MSNBC. Within 10 minutes after Drudge posted the Kerry intern item, Crawford sent a memo to his superiors that said the story was "something Chris Lehane (clark press secy) has shopped around for a long time." According to Crawford, someone at MSNBC promptly leaked his memo to Drudge. But when Lehane called Crawford with a loudly indignant denial, the MSNBC columnist quickly issued a public retraction. He said:

"The comments attributed to me are from a private email to television news associates based on conversations with Democratic campaign operatives. I did not consider any of it confirmed enough to report or publish. I can only verify that Chris Lehane's rivals in other Democratic campaigns made these claims and I have found no independent source to confirm it. Which is why we did not go with the story. But then someone sent my email to others, which is the only reason it got into the public domain." In other words, there is no proof that Lehane circulated the rumor, let alone that the rumor has any basis in reality.

Once again, Drudge has raised questions -- but they may not be the ones he seeks to raise. The first is about journalistic standards. The second is the identity of his anonymous sources.

Journalists must ask themselves why the rumor of a private peccadillo deserves their attention and resources in the 2004 campaign. The press faces a more important issue: learning from its own failure to report the false rationale and abused intelligence that drove the nation to war.