Can Larry David stop himself from turning his "Curb Your Enthusiasm" hero into an unrepentant jerk? 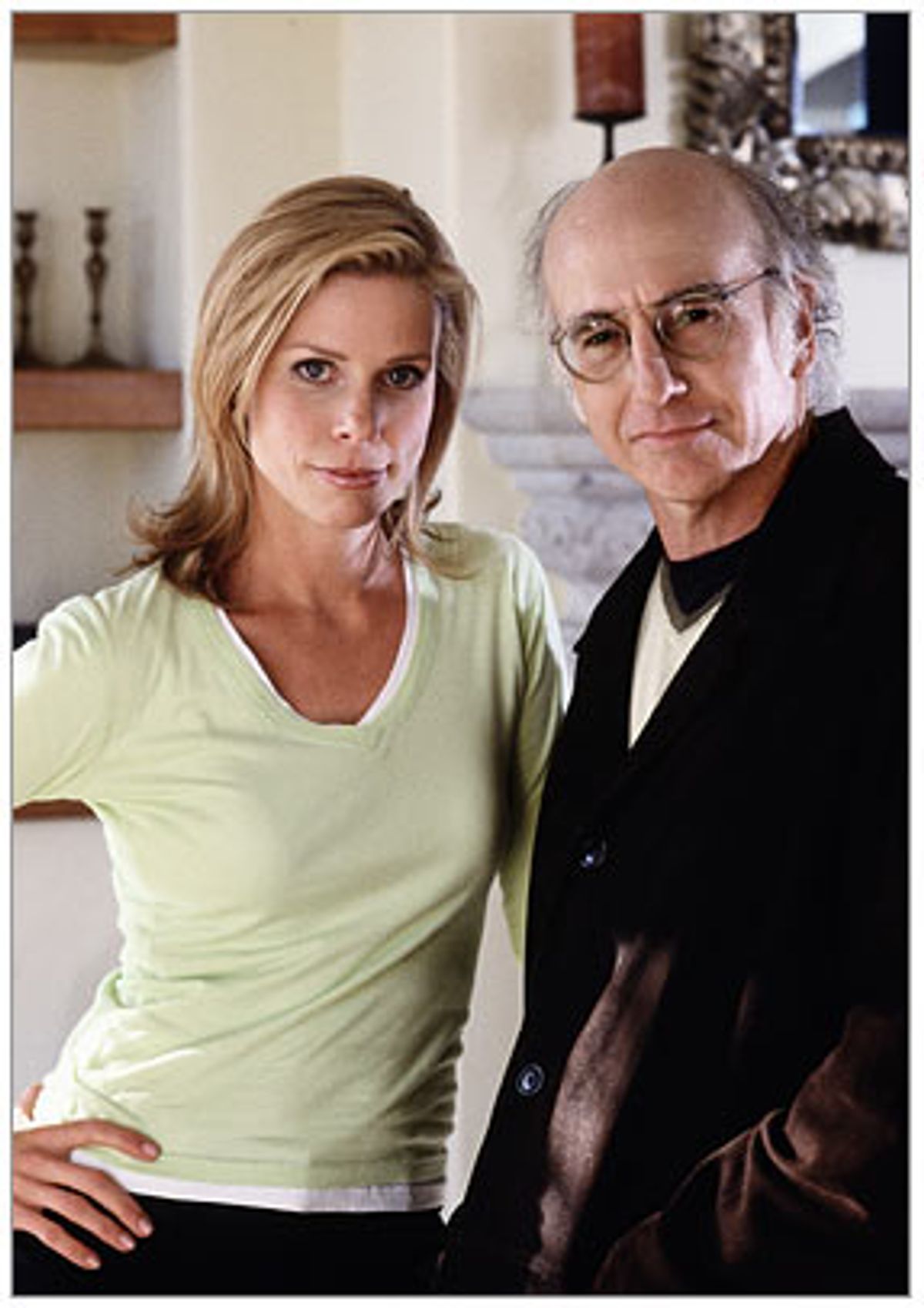 Most adults are unspeakably full of crap. We recognize this when we're young, but most of us slowly but surely develop into full-grown, full-of-crap adults anyway. A perky co-worker asks, "How are you?" and we say, "Great!" even when we're in a foul mood and wouldn't mind kicking her teeth in. A friend's mother says, "I've heard a lot about you!" and we say, "All good I hope!" when really, we couldn't care less. When prompted, we'll state that we think our boss is probably the best boss we've ever had, we love what our mom has done with her hair, the restaurant our boyfriend picked out for Valentine's Day is fantastic, those pants look great on him and the Propecia is definitely working.

Of course, America is probably the most full-of-crap country on the globe, but the consensus here is that lying and sugarcoating everything keeps us on everybody's good side -- oh, except for the European Union, but they're just jealous, right? We're told that people who speak their minds like, say, Yoko Ono or Denis Leary or Ralph Nader, are slightly unsavory and will only screw things up and rob the rest of us of the good life we're entitled to. Plus, they usually smell funny and have lint on their sweaters.

And then there's Larry David, also known as the Only Man Among Us Who Is Truly Free. On his popular HBO comedy "Curb Your Enthusiasm" (Sundays at 9:30 p.m.), David does what he wants and says what he's thinking at all costs. While critics have described David's character as obnoxious, selfish, rude, nasty, pathetic and worse, considering the unbearable burden of politesse the rest of us struggle under, David is a true American hero, one whose confrontational behavior is merely a natural response to the absurd and moronic requirements of modern life.

Or at least, that's where our cathartic Larry David experience began. The first season of "Curb Your Enthusiasm," recently released on DVD, reminds us that in the early days, David was remarkably reasonable and sympathetic. The questions he struggled with were almost uniformly relatable: Why do you have to make an appointment at a doctor's office where patients are served on a first-come, first-served basis? How late is too late to call a friend? Why should you have to add an extra tip for the "captain" at a restaurant, when you've already given the waiter 20 percent? And when David's conflicts stretch far from a typical viewer's experience -- like when a neighbor blackmails David into introducing him to Julia Louis-Dreyfus -- we catch a glimpse of some of the more irritating trappings of fame.

Over the years, though, David has transformed slowly but surely from an Everyman into an unrepentant jerk. Instead of sympathizing with David as an extremely frank Jewish guy among a sea of bullshitting gentiles and brown-nosing Hollywood types, he's increasingly presented to us as freakishly uncaring. Just as the characters of "Seinfeld" crossed the line from aimless and mildly self-serving to downright demonic right around the time George inadvertently poisoned his fiancée and it was played for laughs, David's actions can sometime slip into the realm of caricature.

This season in particular, David's antics are less realistic and more disturbing. It's impossible to buy the running gag that wife Cheryl (Cheryl Hines) had promised David before they were married that he could sleep with another woman for their 10th anniversary. Watching him mull over his potential partner isn't funny, it's disturbing. And is it really that amusing when he inadvertently pokes Ben Stiller's eye with a wooden skewer, or is it just too fantastical? When he harasses his friend who is in mourning, is that outrageous, or is it just depressing?

Even when David's behavior falls within the realm of possibility, the reactions to that behavior are consistently over the top. When he takes heat for not bringing a present to Stiller's birthday party (even after the invitation specifies "No gifts") or for not singing along to "Happy Birthday," his behavior seems cranky, but believable. But do we really buy Stiller confronting him about either of these so-called offenses, let alone doing so in front of other people? These days, everyone seems to end up screaming at David within minutes of meeting him. Such scenes may be a lot of fun for those who participate in them, but even the gamest audience can only take so much.

The strange thing about "Curb Your Enthusiasm," though, is that even if you dislike some of the scenes, you can still find plenty of good reasons to tune in. The show's old tricks might be sort of kitschy and annoying, like when a roomful of people begins to scream at David at once, or when a character gets so angry with him that he tackles him to the ground, but somehow each episode manages to redeem itself. This season, even though it seemed unlikely that Mel Brooks' secretary's girlfriend would physically assault David, even though many of the conflicts (particularly with Stiller) seemed to escalate into shouting matches too quickly, it all paid off when his attempts to secure marijuana for his glaucoma-impaired father resulted in one of the best episodes since he discussed oral sex with Krazee-Eyez Killa.

Part of the show's appeal lies in the fact that its improv format is so unique and unpredictable. Despite each unrealistic twist, the reactions these actors have when they stumble on a bit of brilliant dialogue is so much more natural than anything you see in the canned atmosphere of most sitcoms that the wait is more than worth it. The best jokes aren't really jokes at all, but hilariously odd choices by the actors. When Louis Nye, who plays the father-in-law of David's agent, Jeff Greene (played by Jeff Garlin), is ordering dinner at a restaurant, and says to the waiter, "I'll have the Fish Frenzy" with such relish in his voice, you wonder if there could actually be a dish by that name, or if Nye is just some kind of crazy genius. (The line was improvised, according to the DVD's commentary.) And, as executive producer Robert Weide points out on the DVD, it's rare that you see genuine laughter on TV as you do when, in the course of yelling at each other, David and his friend Richard Lewis manage to make each other laugh. When Lewis tells David he has until sundown to call him, and David responds, "Who are you, Gary Cooper?" it's tough not to feel that you're witnessing something special.

While they shoot a number of takes of each scene and milk as much humor as possible out of every scenario, there's a loose aspect to the whole affair that's inexplicably appealing. The commentary on the DVD underscores the chaos of David's approach.

Robert Weide: By the way, I still think that refrigerator helped make the decision about having no kids in the show. Because when we shot in the kitchen, it was like, "Well, if you have kids, we gotta put stuff up on the refrigerator." Larry's like, "Ah, don't bother, we don't have kids."

Cheryl Hines: Yeah, I think we decided that night.

Weide: Yeah, literally, right before we started shooting, "Do you have kids or not?" "Ah, we don't need kids."

Larry David: That's how much thought went into this thing.

Of course, like Tim Conway and Harvey Korman cutting up on "The Carol Burnett Show," "Curb Your Enthusiasm" may reap the benefits of its novelty indefinitely, while the imitators who try improv on for size ("Curb" alum Wanda Sykes has an improv-based show in the works with Comedy Central) run the danger of appearing about as fresh and original as Jimmy Fallon and Horatio Sanz cracking themselves (and no one else) up on "Saturday Night Live." Plus, it'll be tough to find a cast with this many endearing improvisational tics. While Garlin seems to settle into a bemused calm with David most of the time, Lewis offers that he's an alcoholic with intimacy issues so often, and at such odd moments, it has become a kind of mantra for his character.

Now in its fourth season on the air, "Curb Your Enthusiasm" may be suffering from the same problems that afflict many long-running series. By trying to outdo himself each week, David has gradually jacked up the stakes and the level of hysteria to a point where we can no longer suspend our disbelief. Instead of going to the shouting match every time, wouldn't it add more texture to the show if Larry occasionally squared off against someone who refused to take his bait, or fought back with passive-aggressive tactics? Like the telemarketer who called me recently and, in response to my insistence that I was too busy to chat, blurted, "I wish we had more time to talk, you seem like a wonderful person" in a tone that indicated exactly the opposite, sometimes the most scathing -- and hilarious -- reactions are those that don't involve yelling, "You fat fuck!"

The over-the-top story lines and hysterics are unnecessary anyway, since the bread and butter of this show remain the small frustrations and miscommunications of life among the leisure class. Lacking bigger fish to fry, David finds himself sweating the small stuff beyond the point of rationality. Since he's incredibly wealthy, he's empowered to be as much of an asshole as he wants to be, and strangely enough, his pathetic nature keeps us from detesting him the way we would any other power-wielding rich man. Thus, in the first season, when his lawyer (Nia Vardalos of "My Big Fat Greek Wedding") reads his script without his asking, then charges him for her time, we relish his angry response.

"That sarcasm isn't working for me," she tells him.

Ah, yes. Firing snotty lawyers must be so relaxing!

In truth, "Curb Your Enthusiasm" would have to be absolutely awful for most of us to stop watching it. Thanks to the mandatory positivity of our culture, many of us secretly long to be unrepentant grouches and confrontational jerks, and we find in Larry David the perfect catharsis: His brutal honesty creates chaos but is ultimately harmless. He'll never be a spoiler in an election or get busted for drugs or break up the Beatles. At most, he'll spill his latte on a stranger, dent his manager's wife's car, piss off a clerk at Barney's, and hurt the feelings of a few "Seinfeld" fans. But he'll do it all without getting a speck of lint on his sweater.