Why did the "outstanding young pilot" stop flying? Why dont the records document his time in Alabama? And what about the missing physical? The 400-page document dump has no answers. 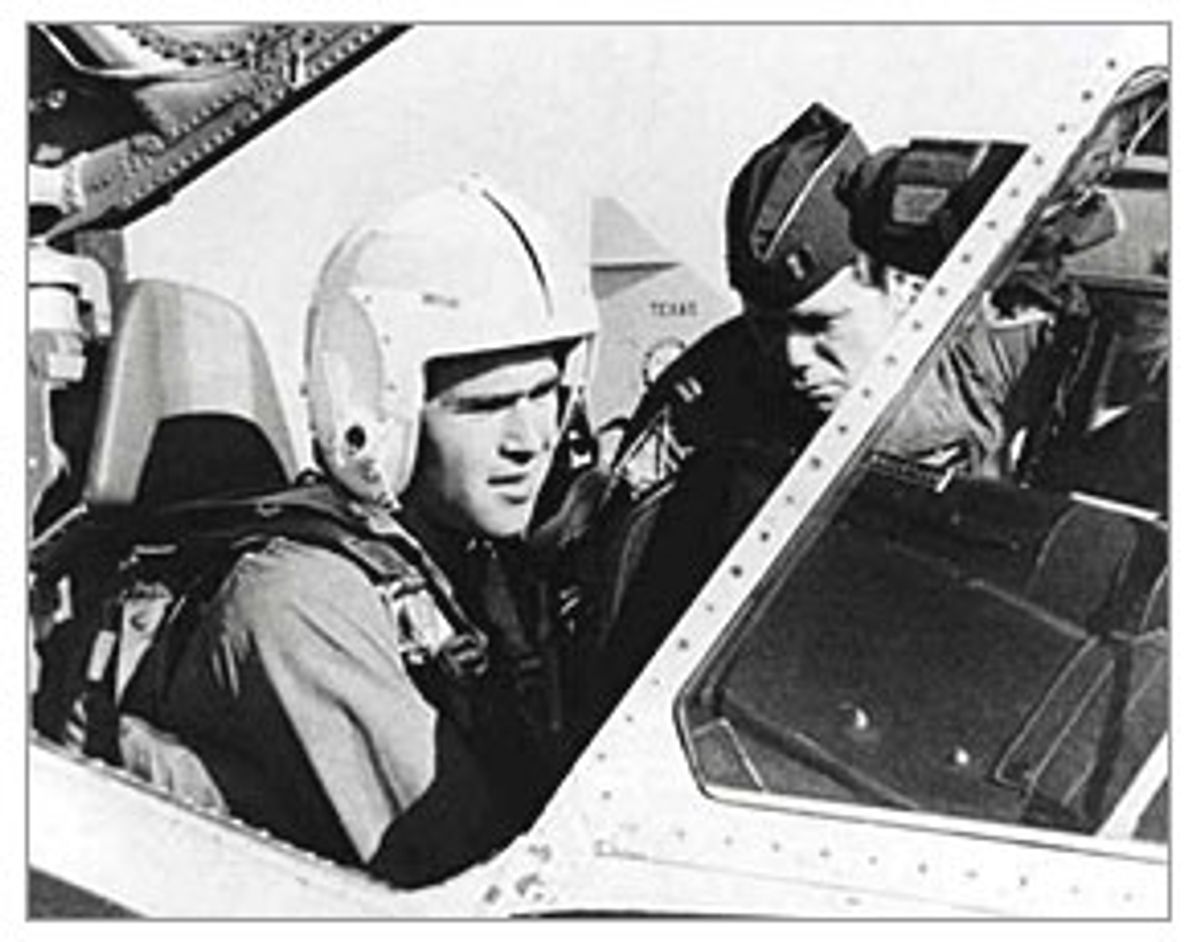 If the Texas National Guard had ever asked George W. Bush to prove he'd fulfilled his duty and he had to depend on the papers in his own military file to make the case, he would have been unsuccessful. That's the only conclusion that can be drawn from the White House's recent document dump, in which aides insisted they released "absolutely everything" in the president's file in order to remove any lingering doubts about Bush's Guard service between 1972 and 1973 when Bush moved to Alabama to work on a Senate campaign for the friend of his father.

Instead of answering the questions, the documents, most of which were simply duplicates of already released public records, confirmed what skeptics have been saying for some time: There's simply no data available to knock down the assertion that for months at a time Bush failed to show up for required Guard duty. Instead, a picture continues to emerge of a trained Guard pilot who in 1972, two years before his six-year commitment was up, decided to not only walk away from his flying duties completely, but to serve as little as possible in the Guard, before getting permission to leave in order to enroll in Harvard Business School.

The surprising absence of relevant documents over the weekend may add credence to the accusation raised six years ago by a retired Texas Air National Guard officer who claims aides to Bush went through his military file in 1997 and removed anything that would have been embarrassing for Bush as he prepared to run for reelection as governor of Texas, and planned a 2000 presidential run. Among the documents Ret. Lt. Col. Bill Burkett claims to have seen tossed in the trash can in 1997 were Bush's personnel review and pay records, the type of documents that are missing today.

The most glaring omission from the stash released by the White House is Bush's 1973-'74 Officer Effectiveness Report. Commanders are required to fill one out for every officer who serves. The last OER on record for Bush was completed on May 2, 1973, and covered the period from May 1, 1972, to April 30, 1973. But according to Bush's payroll and retirement records, he was credited for serving 38 days after May 2, 1973, which means he should have been evaluated. Yet his officer rating seems to have simply disappeared.

Unlike Bush's routine Guard pay stubs, which would have shed light on his whereabouts but seem to have also been lost sometime during the last 30 years, OER's are among the most important personnel reports generated inside the Guard. "I've never met a commander in 28 years that didn't take OER's seriously," Burkett told Salon last week. "They review OER's in excruciating detail and probably take them more seriously than pay documents."

Also AWOL is any documentation to indicate whether First Lt. Bush, a fighter-interceptor pilot, ever took a physical exam during his last three years of his Guard service. He was supposed to take one every year to coincide with his birthday. Bush passed an exam May 15, 1971, but in the summer of 1972 he refused to take one, and lost his flying status because of it. In the summer of 1973 Bush was still serving in the Guard, but no records exist to prove he ever took a physical. In fact, there's no evidence that in the 42 months between May 1971 and the time he was officially discharged on Nov. 21, 1974, Bush ever took an Air Force physical.

The White House refused to release all 44 pages of Bush's military medical records to the public. Instead, in an effort to maintain a "zone of privacy" around Bush, a small pool of reporters were given 20 minutes at a time to look over the documents. They were not allowed to make copies, thereby assuring the documents could not be posted online where they would be subject to further scrutiny. Nonetheless, it's safe to say that if the White House had any evidence Bush passed a physical between 1972 and 1974, it would have been made public.

The mystery surrounding Bush's physical is one the White House continues to grapple with. Over the weekend Dan Bartlett, the White House communications director, told the New York Times Bush didn't take the physical because when he transferred to Alabama for the Senate campaign, his temporary Alabama National Guard unit did not fly the same fighter jet as Bush trained on in Texas. Therefore, because Bush could not fly planes in Alabama, he did not bother to report for the medical exam. Bartlett's explanation makes it seem as though Bush failed to take the physical only because of the discrepancy in the type of fighter planes being flown in Alabama. The truth is Bush originally asked to be transferred to an Alabama Guard unit that flew no planes. It was a postal unit and his choice was eventually overruled by the National Guard headquarters, which did not see the merit in Bush, a full-trained pilot, serving at a paper-pushing unit. (Bush was eventually assigned to a unit that flew planes.) So despite Bartlett's spin, it's clear that by the spring of 1972 Bush had already decided, apparently unilaterally, that his flying days were over and that he was not going to submit himself to a physical. His unit assignment in Alabama appears to have had nothing to do with that decision.

Bush's failure to take the physical in 1972, and his subsequent loss of his flying status, should have triggered a disciplinary review, copies of which would be contained in Bush's military file. But none exists. If no disciplinary actions were ever taken, it would likely confirm the suspicion that Bush's commanders looked the other way while the son of a congressman was able to bend military rules to his advantage.

The records released by the White House do include early evaluations that described Bush with high praise. "Lieutenant Bush is an outstanding young pilot and officer and is a credit to this unit," Lt. Col. Bobby Hodges wrote on May 27, 1971. "This officer is rated in the upper 10 percent of his contemporaries." But against the backdrop of Bush's sudden disappearance from the Texas Guard, and his apparent failure to fly again, the praise only serves to highlight the strangeness of the president's Guard trajectory.

Meanwhile, the White House appeared to gain some momentum late last week in finally locating people who could vouch for Bush's mysterious Alabama service. But upon closer examination, their stories did little if anything to support Bush's claim he served honorably while in Alabama. For instance, Jean Sullivan, an Alabama GOP leader, stepped forward last week and told reporters Bush worked hard on the Blount campaign. But she also conceded that even back in 1972 there were rumors Bush wasn't fulfilling his Guard duty. She dismissed the talk as the work of "some idiots" within the Alabama National Guard who were jealous of Bush. Still, thanks to Sullivan, we now know real-time doubts were being raised about Bush's service in Alabama.

Republicans last week also provided reporters with the phone number of John "Bill" Calhoun, a former Alabama National Guard officer. He told journalists he was upset during the 2000 campaign when he read references to Bush's lapsed service and tried to contact Bush's campaign, but never heard back. Apparently Calhoun, who now lives in Georgia, did not see the press reports at the time about a group of Alabama veterans who offered a $3,500 reward for anyone who would come forward in 2000 and corroborate Bush's claim about serving in Alabama.

Last week Calhoun told the Atlanta Journal-Constitution that Bush asked for weekend drills. But according to the documents released by the White House one week ago, only five of the 12 days Bush was credited for serving in Alabama were for weekend days.

Specifically, Calhoun told reporters Bush was assigned to his command at the 187th Tactical Reconnaissance Group, and he saw Bush serve between eight to 10 times for about eight hours each from May to October 1972. But those May-to-October dates do not correspond with the payroll records the White House released last Tuesday. They indicated Bush was credited for doing Guard duty in Alabama during the months of October, November and, presumably, January.

Secondly, when Bush moved to Alabama to work on the Blount campaign, he first asked to be transferred to the 9921st Air Reserve Squadron (the postal unit). There's no evidence Bush ever showed up at the 9921st. Instead, Bush in September 1972 asked to serve with a different Alabama unit, Calhoun's 187th Tactical Recon Group, for the months of September, October and November. So why would Calhoun have seen Bush signing in at the Montgomery base during May, June, July, August and September, if Bush didn't even ask to be transferred there until Sept. 5? And according to the recently released White House documents, Bush didn't actually show up at the Montgomery base until October 28-29.

Like so many of the mysteries surrounding Bush's Guard service, the White House account and Calhoun's simply do not add up, and the questions are unlikely to go away.