With its photos of lanky slacker bohemians, the new magazine Sweet Action is the thinking girl's antidote to bulging Chippendale hunks. 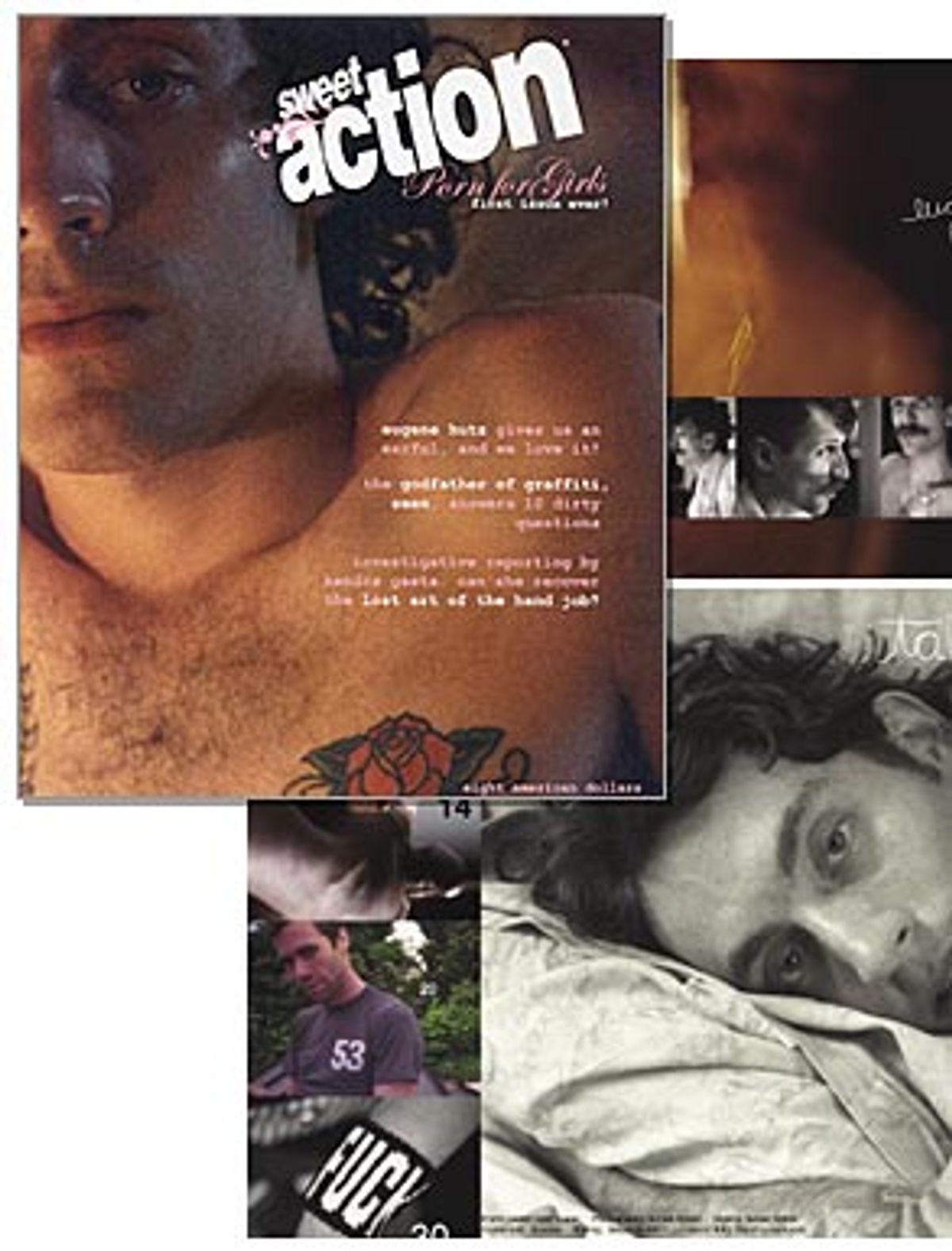 Sweet Action is populated with naked hipster boys who could probably discourse about the male gaze. Adams, a soft-spoken lanky blonde, and Taggart, a spitfire with a springy tumble of dark curls, are tenderly objectifying the sort of guy that never rates staples in his stomach, the sort of guy last seen wandering the Sunday afternoon streets of the East Village or Willamsburg or Wicker Park or Los Feliz with a bed head full of sketches for a novel or an album or a screenplay. They serve them up dreadlocked or gray-bearded and tattooed, or pale and wiry, under a string of Christmas lights in someone's backyard, or next to a half-empty glass of microbrew. Some photos are pensive black-and-white portraits, while others are unremarkable snapshots with the digital readout of the date they were taken. Sweet Action is more 'zine than glossy, with cartoons and lots of typos strewn throughout the interviews with graffiti artists and Gypsy punk rockers. There's an attempt to recover "the lost art of the hand job," in which a staffer administers a few to some "test subjects," and "a first-timer's guide on how to eat out your man's ass." (As for the protocol for removing "raisinettes," we recommend you buy the magazine -- sold at sex toy shops and independent bookstores -- which costs $8).

If you're a straight man seeking indie chick pinups taken by the people for the people, you're set: imitations of SuicideGirls' girls-in-glasses fantasias, several of which are co-run by women, are all over the Web. Even though SuicideGirls does feature boys, they're hardly publicized on the Web site and they're certainly not what made it into a multimillion-dollar brand that Playboy wants a piece of. "It's great to see a woman-centered porn magazine with such hot pictures," says Jen May, a manager at Toys in Babeland in Manhattan. "[Sweet Action] is smart and sexy -- I mean, where else can you find an article about how to eat man ass? We can't keep them on the shelves!"

They also wanted to take a lighter approach. While Adams and Taggart love the SuicideGirls and their "rockabilly-slash-Bettie Page" look, they've tried to be less strict with their house style. And they're not pushing an agenda, which sets them apart from the feminists at Cake, whose strident sex-positive Web communiqués often have the ring of the Internationale with, say, lyrics about the uplifting power of vibrators. "A lot of women who make woman-centric porn need to assert their dominance," says Adams. "We're trying for a back-and-forth between the sexes." The visuals may suggest that they're targeting habitués of dive bars and thrift stores, but they say they aren't going after a specific demographic and are just hoping to entertain women in their mid-20s to mid-30s who are "like us," says Adams, "free-thinking, sexually experienced, with a sense of humor." If somehow their straight-girl fantasies end up turning gay men on, that's great too.

The magazine is chirpily salacious, lacing the giddy innocence of crushing hard around adult content, providing a forum for women to explore the contradiction expressed in a slogan on a T-shirt Adams once designed: "Sometimes I feel like a slut, sometimes I don't." Even frank appraisals of their models are suffused with Tiger Beat breathlessness. Adams: "Those two were both winners!" she says, reminiscing about the day they were introduced to their centerfold and another willing accomplice. "Those huge units!" Taggart concurs: "Shocking!" Back to Adams, sweetly: "They were the nicest guys." There are no apologies for their enthusiasm. "There's never really been a way for women to have permission to be boy crazy and still admire the guys as equals," Taggart says. "We respect the guys that we're lusting after."

And that would be a look-but-don't-touch form of lust: Taggart is married, and Adams has a boyfriend. Taggart says her husband, whom she's known since she was 13, knows she's always been boy crazy -- she used to fanatically paper her bedroom walls with pictures of Johnny Depp, River Phoenix, and, uh, Kirk Cameron -- so he isn't fazed by her job. He's actually helped recruit. Adams, however, had to talk it out a bit with her boyfriend (who eventually ended up in the magazine -- which unit is his we can't say). "I just kind of explained that that's the way I am," Adams says. "My personality is flirtatious and outgoing. It may be one of my weaknesses, but with the magazine I was trying to use that in a positive way."

For instance, she is now able to redirect the well-meaning though potentially annoying attentions of art supply store security guards. "I was in this store," she says, "wearing a sweater that you could see through a little bit -- I must have been dressing in the dark. I don't know what I was thinking. So the guy at the door was following me around the store with this grin on his face that said, How you doin'?" The guard finally asked her if she had a boyfriend. She said she did, but showed him the mock-up of the magazine and told him, "I can't date you, but my friend and I can take a picture of you naked." She gave him her number, and sure enough, within minutes he was calling to say he was up for a shoot.

Not everyone's been that easy. One of the downsides to fetishizing the relatively well-adjusted hipster guy next door is that, though he may pose for free, he tends to have scruples. "We're not finding people that are going to have sex in front of us," says Adams. "So for the first issue, we did what we could with what we had -- which was a couple of really cute guy friends who said they'd pose." One of the first volunteers later decided not to have his pictures run because his mother would die if she found out. To soothe the nerves of another, they took him to a nude beach on Fire Island where he'd just be one of many in the buff. ("We had to convince him," says Taggart, "but he loved us trying to convince him.") They do retain a single girlfriend for fluffing. "But basically the guys have to fluff themselves. We have a hands-off approach -- you know, we have to take the pictures. We fluff on a level that's more cerebral. We're very encouraging verbally."

The magazine's first cover boy, Josh Slater, who, with black ringlets hanging in his sleepy eyes, could pass for one of the Strokes, appreciates their M.O. He says the shoot, which took place at Adams' apartment, was never sleazy or raunchy. "They were really sweet and positive about the whole thing," Slater says. "They were like, "Awesome! You did it!"' Slater, 25, an artist who recently moved to Portland, Ore., from Brooklyn, found his way into the magazine via his roommate, who is a contributing writer. He says that he wasn't sure about posing at first, but since he'd done work as an artist's model, and, he says, "it's not like I'm running for Congress, or plan to," decided there was nothing to lose. (Getting liquored up a bit helped.) Some friends made fun of him for it, he admits, "but once they saw that the magazine wasn't trashy, they stopped." Would his mother die if she knew what he'd done? "The first thing she said when she heard about it was, 'Josh, promise me you won't go into prostitution.' But for the most part she's been weirdly positive, saying, 'Oh, maybe this will lead to something!' She's sort of psyched. I think she thinks I'm doing nothing with my life."

Taggart and Adams paid for the first issue themselves (contributors were paid through bartering and received some of Adams' jewelry). There was a fundraiser in September, and they solicited a few ads from female-friendly sex-toy shops, local bars and bands -- and as with most DIY enterprises, credit cards have been maxed out. One-third of the 3,000 copies they printed have been sold, and they say the magazine has already made back half of the nearly $10,000 they laid out for producing and printing it. They're gearing up to print 5,000 copies of the next edition, a music issue, which is due out in May. There is also talk, somewhat tongue in cheek, of building an empire. Says Adams: "We won't stop until we get a Sweet Action mansion in Mexico!"