Meg Ryan stars as scrappy pioneer boxing manager Jackie Kallen in this fightin' fable that packs a punch despite its considerable flaws. 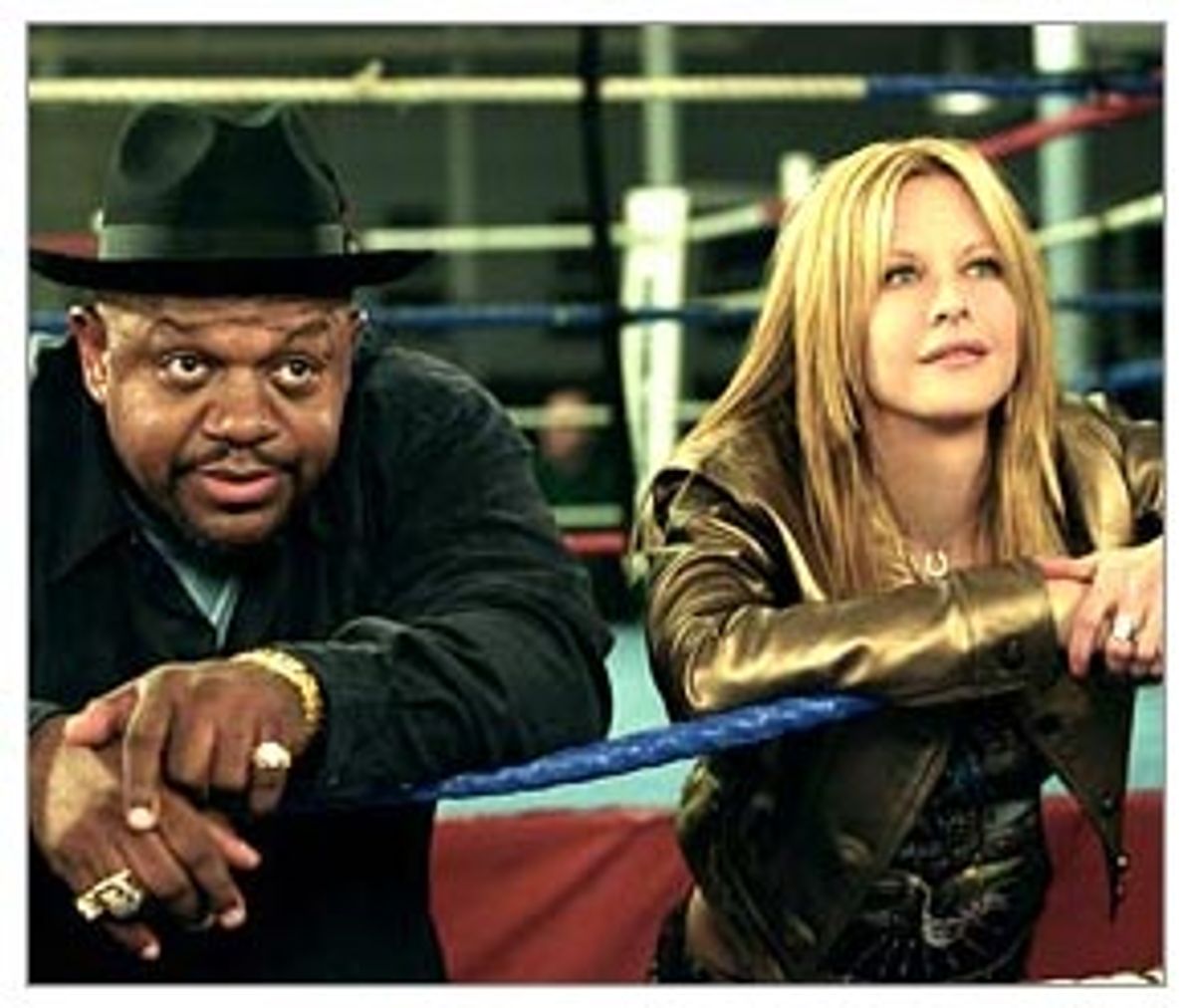 If there were a place for B movies in our moviegoing universe -- if B movies existed at all anymore, outside of a few jokey, low-budget horror pictures -- "Against the Ropes" wouldn't be the misfit picture that it is. The problem with this superfictionalized version of the life of pioneering boxing manager Jackie Kallen is that it's a B movie that can't admit as much to itself -- how could it, when movies today are either blockbusters (which denotes quality) or failures (which suggests a lack thereof), with very little in between?

"Against the Ropes," which was directed by one of its stars, Charles S. Dutton, has all the earmarks of a "bad" movie, for those who are keeping score at home: ridiculous dialogue, corny emotion, a bright young woman from Cleveland who starts out at the bottom and pulls herself up by her spandex. But somewhere along the way, I found myself enjoying "Against the Ropes," not in spite of my better judgment, but because something in the movie defies the whole notion of better judgment altogether. In the classic B-movie tradition, it's melodrama with steely psychological underpinnings, a story that doesn't just celebrate good old American ambition but also underscores the price to be paid for betrayal and hubris. Forty, or maybe even 20 years ago, it could have been made and sold as a cheap, energetic, dramatic entertainment. Today it has to be a hit, or else.

And so "Against the Ropes" suffers, because it's been given a faux-classy sheen that doesn't suit it, including a preposterously phoned-in score by the late Michael Kamen. (At a decisive moment, Jackie, played by Meg Ryan, makes a U-turn in her car and a very determined piano swells in the background, sounding the alert: serious stuff ahead!) Cinematographer Jack Green (known for his work with Clint Eastwood) has made the picture look attractive, artful and serious. The actors utter clunker lines with so much conviction that it seems no one has a clue how lousy they are. The script was written by Cheryl Edwards, and it includes doozies like these: "You need to get real about where you are -- you are stuck in the basement. You gotta get in the elevator and push some buttons."

When I heard that line, I instinctively touched pen to paper to jot it down, and all around me I could hear the gentle scribble-scrabble of other critics doing the same, gathering the necessary evidence in our never-ending crusade against lousy dialogue. But during the course of the picture I began to like the dialogue, not to mention many of the actors' performances and the picture's old-fashioned cautionary-tale spirit, which, like a persistent crocus, kept poking above the movie's shiny, multiplex-ready surface. What on earth was going on?

I'm still not totally sure. The movie has its share of problems: The last third or so needs to sprint, not creep. And until close to the end, there's very little actual boxing (although what there is, is deftly shot, suggesting both the brutality and vitality of the sport). Essentially a fable about one gutsy gal, "Against the Ropes" is probably closer to what used to be called a "woman's picture," but unlike most of the other current pictures clearly made to appeal to women (numbingly self-conscious comedies like Nancy Meyers' "Something's Gotta Give," for example), it feels invigorating rather than insulting. When you get right down to it, scrappiness is a lot more fun to watch on-screen than screeds about womankind's "complexity."

The real-life Kallen worked as a journalist for years before turning her hand, successfully, to managing the careers of fighters like James "Lights Out" Toney, who won four championships in four weight classes. The "Against the Ropes" Jackie Kallen, as played by Ryan, gives us a pretty good sense of what it must have been like for the real Kallen to bust into a business where women aren't particularly welcome. And yet "Against the Ropes" doesn't hammer tirelessly on the sexism Kallen had to face. Dutton and Edwards simply accept it as a given, a constant undercurrent, instead of a theme with a capital T. It's a refreshing take, and it allows room for the even thornier racial issues that come up between Jackie and her major client, Luther Shaw (played by Omar Epps).

Jackie discovers Luther by accident: She has worked for years as an administrative assistant to the director of the Cleveland Coliseum, just so she can be closely involved with the sport she loves. In fact, she knows more about boxing than the he-men who huff and puff around the business, including fat-cat promoter Sam Larocca (Tony Shalhoub). She stands up to Larocca's surly cockiness, and to prove to her how little she knows, he sells her the contract for one of his has-been fighters for one dollar.

When Jackie pays a surprise visit to her new client, she learns he's a crackhead. But during the same visit, she meets Luther, who, as a drug dealer's thug, has shown up to throw his weight around. Jackie instantly recognizes that Luther's not just a thug but a "real" boxer and, after quelling his understandable suspicion of her, she signs him up.

Jackie enlists Felix (Charles S. Dutton), a retired trainer, both to hone Luther's natural talent and to knock some sense into him, and the three make for a thrilling, and surprisingly successful, team. But problems crop up when Jackie becomes too dazzled by the spotlight herself; suddenly, Luther realizes that even though she's done a great job of nurturing him as a fighter and as a person, she also condescends to him. That point is made shockingly clear during a press conference, when Jackie answers each and every question, even the ones addressed to Luther and Felix, as if she were the only star of the show. When a reporter (played by the real Jackie Kallen) asks if Luther's career might not crash as quickly as it ignited, Jackie cuts in with her own answer. She blathers on further, to the shocked and nervous laughter of the assembled press corps, quipping that "she's teaching Luther the dictionary."

For just a moment, all the air swoops out of the movie. Isn't this supposed to be a feisty, happy picture about black people and white people working together for a common goal? The bitter and bracing truth is that it's nowhere near that simple, thank goodness. (It's noteworthy that Robert W. Cort, one of the producers of "Against the Ropes," also produced the interracial teen romance "Save the Last Dance"; Edwards wrote the script for that movie as well.) Dutton, Edwards and the actors all seem to recognize that the story could be seen as a liberal fantasy about a white woman who, using her charm, her intelligence, her very whiteness, saves a black youth from the clutches of the inner city. The actors don't smooth out all the static and crackle in their relationships: Luther is at first wary of Jackie, then grateful, then openly and justifiably hostile, and Epps navigates the changes easily and believably. Felix sees where Jackie is going wrong, but he doesn't quite know how to talk to her about it -- he resigns himself to allowing her to make her own mistakes, but the heaviness in his eyes shows how disappointed and frustrated he is with her.

But the movie belongs to Ryan, and not just because she gets to strut through it in a succession of jubilantly trashy outfits, including some faux snakeskin mini-skirts, several Betsey Johnson-style fake-fur rock-star coats, and a liquid-leather jumpsuit that's held together by two or three shoelaces. Ryan works her ass off in "Against the Ropes," and she's something to watch. Ryan has gone from being an intensely boring, desperately cute actress to an intriguingly unselfconscious and self-assured one. I have mixed feelings about her performance in this movie (there are times when she strives a little too hard for dem-dese-and-dose middle-America believability), as well as the one she delivered in "In the Cut" (where I thought she overplayed the innocent mousiness of her character). But where I used to see nothing but a Vacancy sign in her face, I now see wheels turning; she's fascinating, and fun, to watch.

Ryan's Jackie is tough with two F's, the kind of woman who can handle herself magnificently in a room full of meatheads. She flirts when it suits her (conveniently dropping an earring, for example, when she needs to distract a rival manager who's trying to put one over on her), but when she needs to be, she's all business. Strolling through a gym, she walks right past a guy who's rubbing his crotch suggestively, and tosses back, without breaking her stride, "You know, there's a powder for that." And when Ryan has to play Jackie's vulnerable side, she doesn't make the mistake of crumpling: You can see that on some level, she doesn't feel embarrassed or ashamed about having enjoyed the attention that being a powerful woman in a man's world has brought her. As Ryan plays her, Jackie can acknowledge where she went wrong without turning squirmily virtuous. Ryan doesn't soften the character to the extent of shaving off all her rough edges -- she doesn't punish us for the fact that Jackie has learned a valuable lesson.

The final windup of "Against the Ropes" goes on too long, and the movie has a dopily facile ending. But despite its problems, the picture still satisfies -- more than a lot of allegedly worthy "A list" movies do. In a movie world where heavyweight often means top-heavy, "Against the Ropes" shows some pretty fleet footwork.